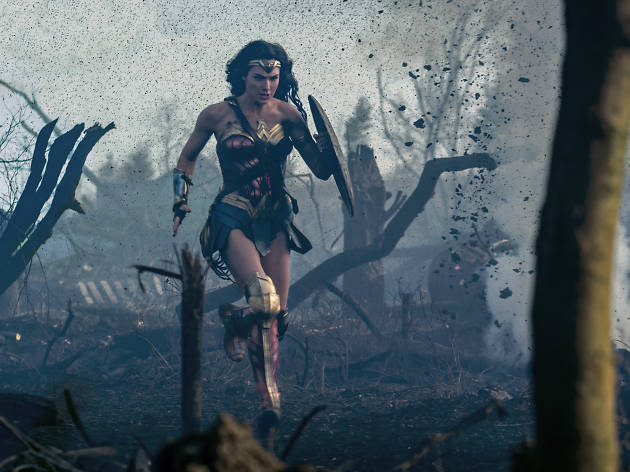 Before seeing ‘Wonder Woman’, I got a sinking feeling. It’s been more than a decade since a woman headlining a superhero film saved the world. I had visions of middle-aged male studio execs huddled together in a conference room Googling feminism and group-thinking how to make a lady-hero. Would the result feel like a two-and-a-half-hour tampon advert? Actually, no. ‘Wonder Woman’ feels like the real deal, a rollicking action adventure in the tradition of ‘Indiana Jones’, with a fully functioning sense of humour and the year’s most lip-smackingly evil baddie.

It has a wobbly opening on a women-only island where hot chicks in fabulous Ancient Greek sandals appear to have wondered in from a Dolce & Gabbana ad campaign. This is Themyscira where the Amazon tribe have lived in peace for thousands of years. Actress and former Miss Israel Gal Gadot (Gisele in the ‘Fast & Furious’ franchise) is their princess, Diana (Wonder Woman), who was sculpted from clay and brought to life by Zeus. The island’s tranquillity is broken by the arrival of a cocky American soldier played by ‘Star Trek’ actor Chris Pine, who is adorable. He knows he’s here as eye-candy and does smoking-hot sexy sidekick with a good sense of humour.

Unlike Batman, Wonder Woman is not plagued by doomy angst. She’s good and kind, with a strong moral compass. A complex female character? Not exactly. But Gadot (who is ex-army and knows her way round a fight sequence) never lets her become bland and simpering. Though she is very nearly outstaged by Anaya as Doctor Poison: with her mask and haunted expression that suggests a twisted, blackened soul, they should hire Anaya for the next Bond film.

So this is an origin story – set yonks before last summer’s ‘Batman v Superman’, in which Gadot made her Wonder Woman debut. It’s also a million miles from the moody dull-fest of ‘Batman v Superman’. Director Patty Jenkins lets the sunshine in. The showdown punch-up at the end drags a little, but the whole thing is carried along by charm and humour. The fish-out-of-water scenes as Wonder Woman arrives on Earth are hilarious. In London, she asks Pine’s loyal personal assistant what a secretary does. She’s horrified by the answer: ‘Where I’m from that’s called slavery.’ This really is Wonder Woman coming to the rescue of the DC Comics universe