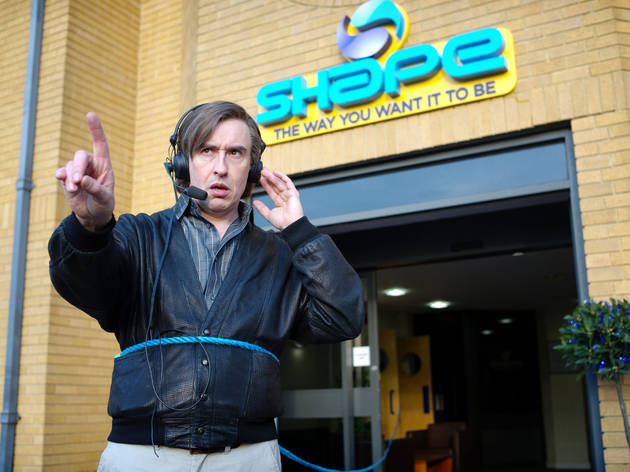 If you had sky-high hopes for Alan Partridge’s big-screen outing, now’s the time to moderate them: Alpha Papa is a film that rewards low expectations. If you’re looking for a few Friday night laughs, this’ll do fine. Steve Coogan is as slimily watchable as ever, the script has its fair share of zingers and it all moves along at a steady pace. But if you wanted something more – depth, excitement, maybe even originality – you may want to try your luck elsewhere.

We find Alan happily nestled in his online radio job at North Norfolk Digital, unruffled by an impending corporate takeover, his dreams of light-entertainment superstardom long since left behind. But when a sacked fellow DJ (Colm Meaney) comes back for revenge, Alan finds himself in a hostage situation – and he’s the only one who can talk the madman down.

Alpha Papa starts well – the opening credits sequence is a cracker – then proceeds to trundle slowly but inexorably downhill, exchanging gloriously awkward DJ banter (‘that was soft-rock cocaine enthusiasts Fleetwood Mac...’) for lame slapstick sequences in which Alan accidentally flashes his bum at the paparazzi. Perhaps it’s down to the film’s tight production schedule – it only started shooting in January this year – but the final act feels rushed and underwhelming, tying up the loose ends with a ‘will this do?’ shrug.

Coogan and his co-writers must be commended for refusing to take the obvious route and deliver a big, brassy US-friendly blockbuster. But they may have erred a little too far in the other direction: where Alpha Papa should be old-fashioned and intimate, it instead feels cheap and a little drab. The film has plenty to recommend it, thanks to a string of memorable one-liners and Coogan’s unmatched knack for skin-crawling physical comedy. But this is a long way from the back-of-the-net strike it should have been.