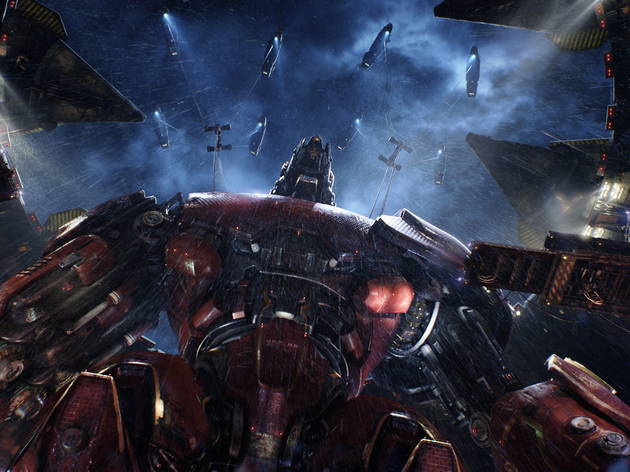 To be fair, Pacific Rim never promised to be anything more than a monumental robot-monster smackdown. Throughout the promotional campaign we’ve barely seen a human face, aside from a brief flash in the trailer of Idris Elba bellowing about the apocalypse. So to turn around and accuse Pacific Rim of being inhuman does feel a little churlish.

But it’s simply impossible to overlook. As the film opens we’re introduced to skyscraper-sized automaton Gipsy Danger and her pilot Raleigh (Charlie Hunnam), as they battle against the ongoing threat from the ‘kaiju’, monsters from another dimension who slip through a portal in the depths of the ocean. Raleigh is the tough, silent type, constantly battling his boss, the gloriously named Stacker Pentecost (Elba) – also the tough, silent type. As is his protegé, Mako (Rinko Kikuchi). And his trusted Aussie sidekick (Max Martini, accent all wrong). Indeed, the only characters who aren’t tough and silent are a pair of irritating mismatched science geeks, one apparently channelling Dr Strangelove (Burn Gorman), the other JJ Abrams (Charlie Day).

The action set-pieces are superb: thunderous, rain-soaked, and beautifully detailed – you can almost feel the rust and the slime. They’re also a tad repetitive. By the climax, we’re starting to feel like we’ve been punished enough. But if Del Toro is pitching for an audience of 12-year-old boys (and we do mean boys: this is old-school macho), he’s done a bang-up job.

Still, there are times when Pacific Rim could be the work of any jobbing Hollywood director – the warmth and idiosyncracy that characterises Del Toro’s finest work, from Pan’s Labyrinth to Hellboy 2, is absent. The Avengers proved that a slightly left-of-centre director like Joss Whedon could find a home in the heart of Hollywood without losing the personal touch. With Pacific Rim, Del Toro doesn’t even seem to be trying.