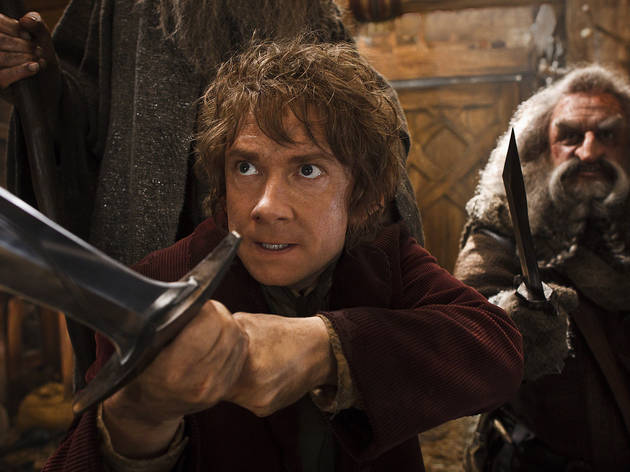 4 out of 5 stars
By now, after the enormous success of The Hobbit: An Unexpected Journey, many viewers will know where they stand in relation to Peter Jackson’s epic new trilogy of films – this reviewer, for one, is a fan of almost every big, bloated, bombastic moment. So if you weren’t taken by the first instalment of this series adapted from JRR Tolkien’s slim children’s novel along with several of his Lord of the Rings appendices, it’s unlikely you’ll suddenly warm to the second. But compared to the first film, the pace has picked up considerably.
There’s a brief flashback to the initial meeting of the grey wizard Gandalf (Ian McKellen) and the exiled dwarf king Thorin Oakenshield (Richard Armitage). Mostly, though, the movie sticks to the company of Thorin, his fellow dwarves and the resourceful hobbit Bilbo Baggins (Martin Freeman) – still carrying the invisibility-cloaking Ring of Power in his pocket – as they continue on their quest to reclaim the kingdom of Erebor from the vicious dragon Smaug (a motion-captured Benedict Cumberbatch).
The Desolation of Smaug shows Peter Jackson in an especially overabundant mood, orchestrating all manner of chaos like a master conductor unleashing his inner fanboy. There’s a shape-shifting bear, the massive spiders of Mirkwood and an army of orcs. Returning archer elf Legolas (Orlando Bloom) and his fellow warrior Tauriel (Evangeline Lilly, auto-tuned into ethereality) provide multiple, gory decapitations. There’s even an extended set-piece involving some barrels and a roaring river that’s so giddily, gloriously executed that you forget it could all just be an elaborate prototype for a yet-to-be-built theme-park-ride.
Exhaustion starts to set in by the time Bilbo and his friends encounter Smaug around the two-hour mark, so it’s a good thing that’s also the point at which Jackson goes full bore with the adrenalising, digitally-augmented braggadocio. In short, you want a fire-breathing dragon, you get a fire-breathing dragon. Rising from beneath an ocean of coins like a scaly mutant version of Scrooge McDuck, Smaug taunts and stalks his terrified prey around the cavernous ruins of Erebor in the film’s lengthiest, most purely pleasurable action sequence.
By the time the beast finally spreads his wings to full span, soaring skyward toward a moon vaguely reminiscent of the one in ET, you’re left in the kind of breathless awe that so few current cinematic superproductions are able to offer.