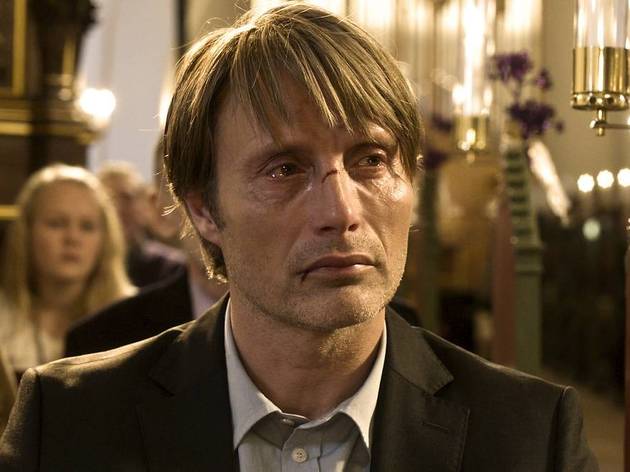 In this nerve-shredding drama from Denmark, a good man’s life is ripped apart by false allegations that he sexually abused a child. He didn’t do it. The little girl fibbed (in the same way she might tell the teacher her best friend gave her a Chinese burn). But her innocent lie spreads like a virus, killing trust and goodness in a close-knit small town.

Mads Mikkelsen is best known for playing baddies – he was the villain who weeped blood in Casino Royale. Here, he’s the accused, Lucas, a teacher working as an assistant at a nursery after his school shuts down. The little girl, a pupil, is also his best friend’s daughter. Lucas is none too worried at first – it’ll all be sorted by teatime, right? The police are called. Parents are warned to be on the look-out for telltale symptoms, like bedwetting and nightmares (in children!). Lucas is branded a serial paedophile. The town goes from civilisation to the Dark Ages in about 15 minutes.

This is lean, fast-paced storytelling from director and writer Thomas Vinterberg, who made Festen in 1998 (about a paedophile father who raped his children). This has the same stripped back docu-drama style. Which focuses our attention on the acting – and it’s flawless. We watch the story play out in the reactions of everyone involved. The kids adore Lucas as he's the only man working at the nursery. After hearing the allegations, a teacher watches him rough-play with some boys. We see the scene through her eyes. It looks suspicious. It really does.

These are all good people, and there’s a kind of moral puzzle here. We always have to listen to children. Always. But what if your best friend was accused? Would you believe him? At the other end of the scale, what kind of world is it when a man can’t hold hands with a child who isn’t his own – in case someone accuses him of being a paedo?

Mikkelsen is gripping. There’s a moment when it hits home that this is for real. You can see the change passing over his face: he will never see the world the same again. Nor will the world look at him the same, because, as we all know, there is no smoke without fire. What a knotty, frighteningly real drama The Hunt is.