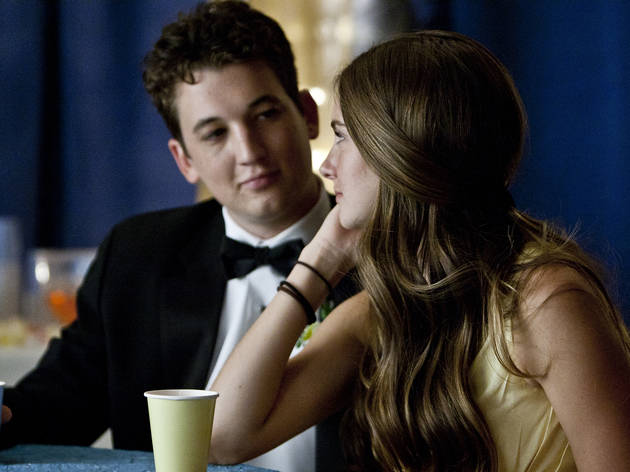 You must remember Judge Reinhold in 1982’s Fast Times at Ridgemont High – the “single, successful guy” whose perfect senior year goes down in flames due to an excess of hubris. The Spectacular Now manages to telescope that entire fall from grace in its first five minutes, as Sutter (Miles Teller, nearly a Reinhold look-alike), a Georgia teen of massive confidence, loses his stunning girlfriend (Brie Larson), makes an ass of himself at a party, hits on a gaggle of uninterested blondes and passes out on a stranger’s lawn.

This is how we expect our teen comedies to go, even more when, out of the house the next morning, comes concerned Aimee (The Descendants’ gifted Shailene Woodley), a younger classmate of Sutter’s but never quite on his radar until, well, spectacular now. He might be feeling vulnerable enough to entertain that shy smile for a while; she might be feeling confident enough to welcome him into her sci-fi–adorned bedroom and tutor him in geometry (and maybe learn a few things herself).

As familiar as this setup is, the boy-meets-girl genre hasn’t yet met director James Ponsoldt, who in only three films has made a persuasive case for being his generation’s premier chronicler of alcoholism. Off the Black (2006) and Smashed (2012) depicted adults wrecked by their curtailed potential and a weakness for drink; Ponsoldt’s latest is even more heartbreaking for scaling back the years. It’s hard to pinpoint exactly when Sutter’s ever-present plastic cup becomes a telling character trait – long after some casual beer swilling in a park, but before he presents Aimee, now his steady, with the prom gift of a hip flask.

You watch the movie with your heart in your throat, worried as Ponsoldt pivots away from Aimee’s fragile initiation into relationships (a sex scene is remarkably frank) and into the rougher territory of peer pressure. She’s way too forgiving of him while having a lot more to lose: College beckons (Sutter’s all but given up) even as she begins to throw back at his unchecked pace.

Nothing about The Spectacular Now feels easy or After-School Special, although it tidies up too much (the personal essay should be retired as a device). The root of Sutter’s pain turns out to be an absence, but Ponsoldt wisely avoids correcting it. We’ve come to know Sutter’s wary single mom (Jennifer Jason Leigh, another Fast Times echo) and, in one powerhouse scene, his wayward dad (Kyle Chandler), who makes no apologies for disappearing. The well runs deep.