When it comes to coastal getaways, the New South Wales Central Coast is a go-to for sunkissed escapes just an hour north of Sydney. However, you may not realise that for nature lovers, this stretch of coast boasts eco adventures all year round. Check out this round-up of 12 ecological activities and tours for connecting with mother nature on your next coastal rendezvous.

13 activities and tours for nature lovers on the Central Coast 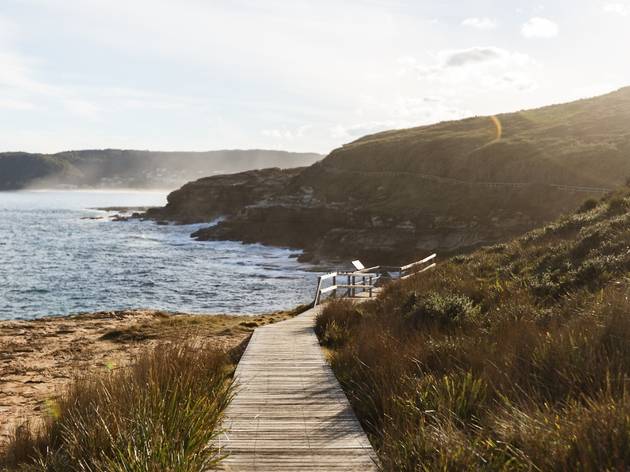 Soak up the sights of beautiful beaches, rainforest and native birdlife on the Bouddi Coastal Walk. Lace up your walking shoes and pack a picnic basket for this relatively low-impact hike located in the Bouddi National Park near Gosford. You’ll pass through shady patches of rainforest and feel the salty spray of the ocean along the boardwalk running from Putty Beach to MacMasters Beach. Along the way you can take a sheltered bush path down to Lobster Beach and take in views of Broken Bay over a picnic, the secluded cove of Little Beach, or if you’re feeling a little more ambitious, you can take the steep walk down to Tallow Beach. The entire path takes between three and four-and-a-half hours depending on your pace, or you can pick a section to break it up into a shorter walk. 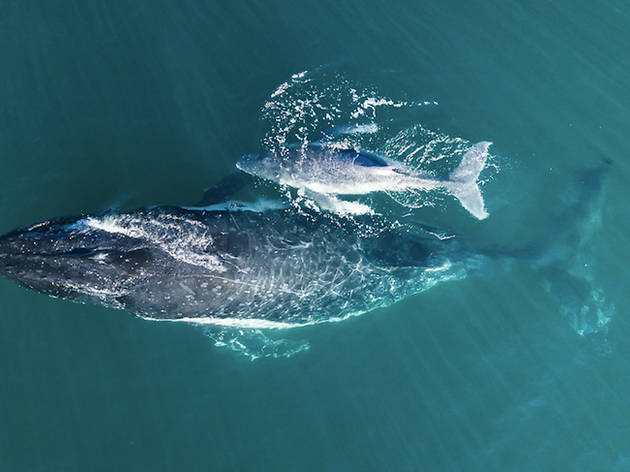 Located in Bateau Bay, this lookout is the ultimate vantage point for whale watching during their annual migration. Tens of thousands of whales pass along the NSW coast every year, and between May and August Crackneck Point Lookout and picnic area is a great spot to settle in to watch out for whales as they make their annual northern migration – or just make a quick stop for a picture-perfect photo opp. From there you can see as far as the Entrance, Shelley Beach and beyond. From the lookout you can set off on the Wyrrabalong Coastal Walk – this national park-set walking trail is a local secret. Head north towards Bateau Bay to walk through a subtropical red gum forest, or head south towards Forresters Beach for a scenic coastal walk. 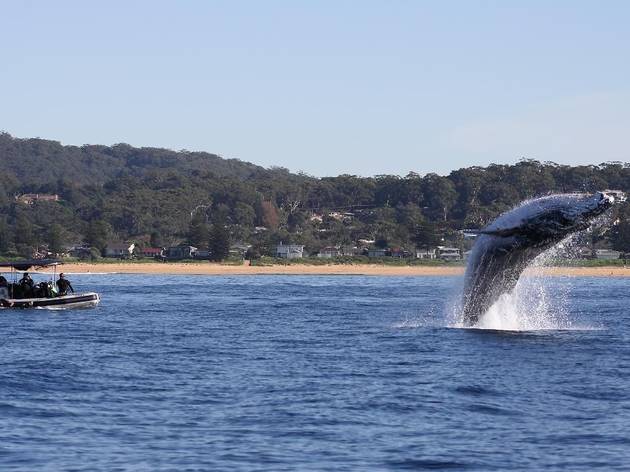 If the game of luck that is patiently waiting for a whale sighting from the shore doesn’t quite cut it for you, you can hit the ocean on an open-boat Whale Watching Tour with Terrigal Ocean Tours. Throughout winter the operator runs tours with a marine biologist on board to answer all your questions and help identify species. If you’re in the area during the warmer months you can see the coastal sights and spot dolphins on the Summer Blast Tour. All year round, you can also explore dramatic sandstone coastlines on the Broken Bay Tour. These tours run with small groups and are in high demand, so it is best to book ahead to guarantee your seats. If you miss out, there are plenty more vantage points where you can catch a glimpse of whales on the Central Coast. 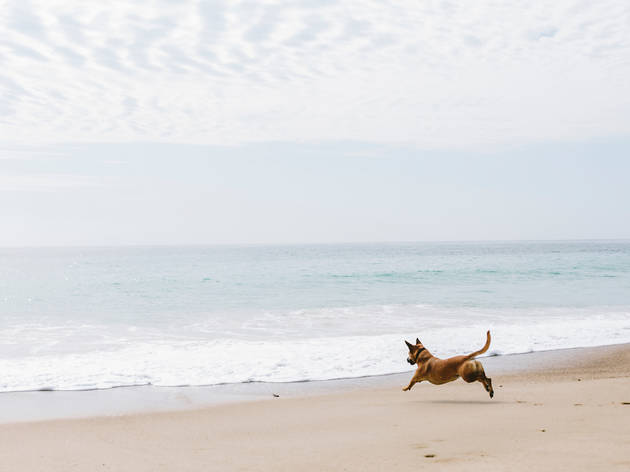 Sometimes it just doesn’t feel like a real holiday without the whole family there, and that includes the furrier members of the household. Before you go booking Fluffy into the kennel, paws for thought – the Central Coast has loads of dog-friendly walks, dog parks and designated off-leash areas. You can take your pupper for the ultimate walkies in Strickland State Forest, have a good chuck of the stick on one of many dog-friendly beaches, and let your good boy or girl roam freely in the council dog parks in Tuggerah, Buff Point and Davistown. 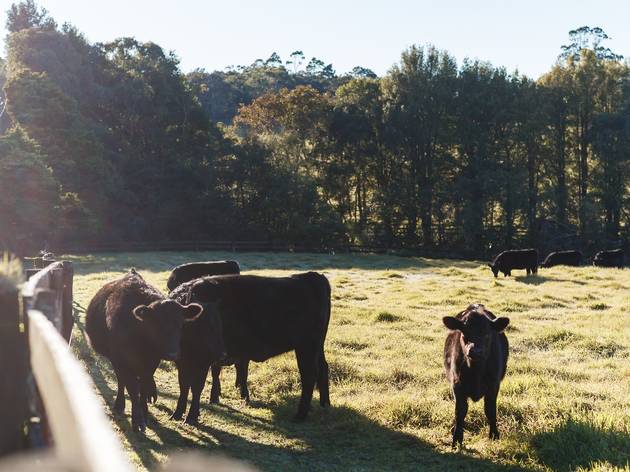 What you might not know about the Central Coast is that it is also a rich food bowl, with the hinterland producing high quality meat and organic fruit and veggies. You can learn all about modern farming and sustainable agriculture from local producers on a tour with Mountain Goat Trails. On the self-drive Harvest Trail you’ll explore local farms and learn about contemporary agriculture and harvest trail initiatives; or you can kick it up a notch with the fully guided Route 33 tour, which takes in Mangrove Mountain and Wollombi Valley, meeting local farmers and producers. The region also hosts an annual Harvest Festival over the June long weekend (it was postponed in 2020 due to government restrictions) celebrating all things fresh and seasonal in the picturesque valleys and mountains. 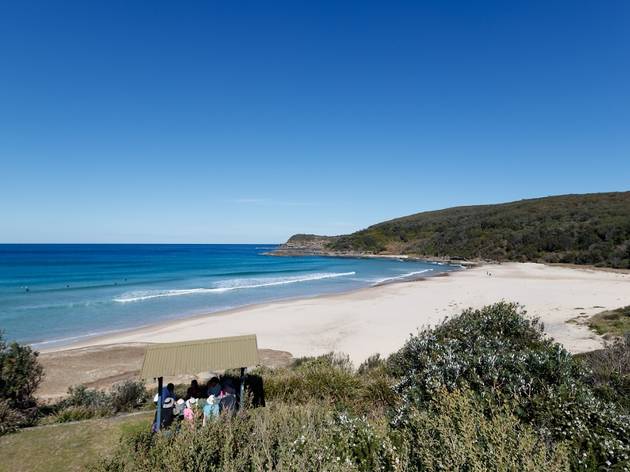 Pristine beaches, breathtaking lookouts, top-notch fishing, camping, tropical rainforest and surf breaks – the Munmorah State Conservation Area is a hidden gem that pulls out all the stops, and you’d be hard done by to find more choices for a stunning picnic spot in one place. You can unfurl your picnic rug amid rainforest in the Palms Picnic Area, surrounded by fan palms and streams of sunlight; unpack your basket and fishing rod on the tranquil shores of Elizabeth Bay; or watch the surf roll in at Frazer Beach. While you’re in the area, don’t miss the opportunity to take in the views from Wybung Head Lookout and Snapper Point. 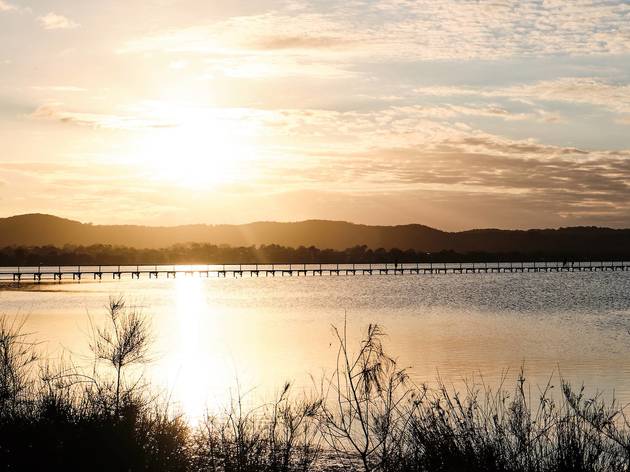 A cycle path carves its way through the entirety of the Long Jetty Foreshore Reserve, which hugs the shores of Tuggerah Lake. This makes it an ideal place to hit the track for cyclists, skaters and scooterers of all ages. The area is named for the three remarkably long jetties that span across the lake – Parrys Jetty, Walkins Jetty and Long Jetty – the latter of which was built in 1915 and reaches out 351 metres into the shallow waters of Tuggerah Lake. As it faces west, the Foreshore has unencumbered sunset views, making it one of the Central Coast’s most scenic picnic spots – so you’ll want to pack a camera. The site has free electric barbecues, a grassed picnic area, sheltered tables and seating, a playground and public toilets. The Long Jetty village nearby is a great spot to pick up a few supplies. 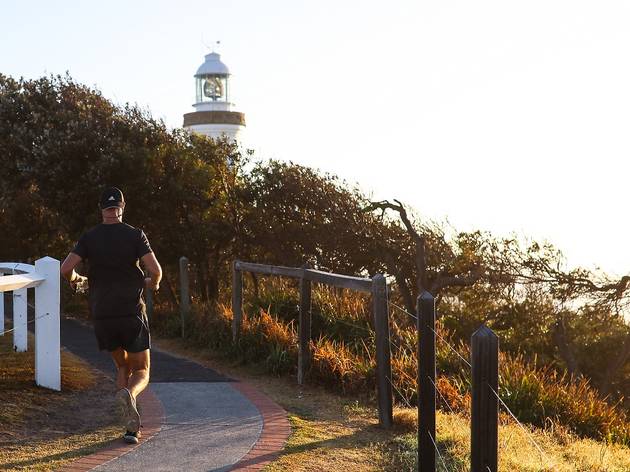 Take a stroll on the Headland Nature Trail and at the end of this short walk of just over a kilometre, you’ll find the historical Norah Head Lighthouse Reserve standing tall, which dates back to 1903. After you’ve explored the grounds you can make your way back along the Headland Trail, which takes in beautiful native flora and (if you’re lucky to spot a scurrying creature) native wildlife too. Alternatively, if the tide is low you can descend down the stairs at the front of the lighthouse and follow the coastline back around to the reserve, passing Nimbin and Lighthouse Beaches and the Rockpool Norah Head along the way. If you’d like to make a night of it, there are two lovingly restored, heritage-listed former lighthouse keepers' quarters available to book in for. Stay for at least three nights and you’ll get a free guided tour of the reserve. 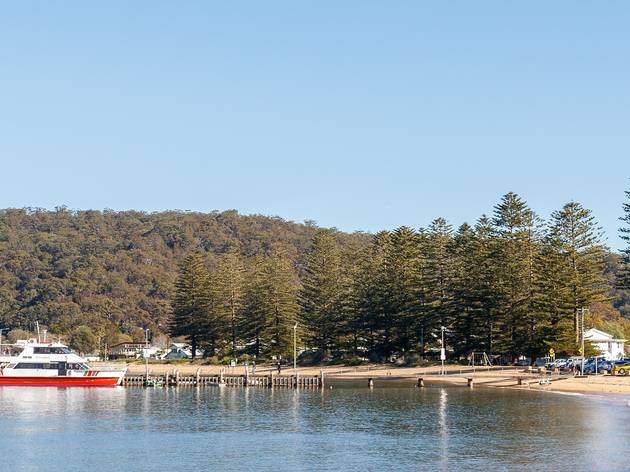 Follow the Great North Walk through the red gums and water views of Brisbane Water National Park with the Patonga to Pearl Beach Walking Track. This three-kilometre walk is bookended by beaches, and provides plenty of opportunities to take a dip or wet a line if you so desire. Allow about two hours for this trek, which passes sandstone caves, hanging gardens of native ferns, and views of Hawkesbury River and the Pacific Ocean from Warrah Lookout. As you exit the walk at Crystal Avenue, you can lay out a picnic where the bush meets the sand or grab a bite at one of the local cafés nearby. 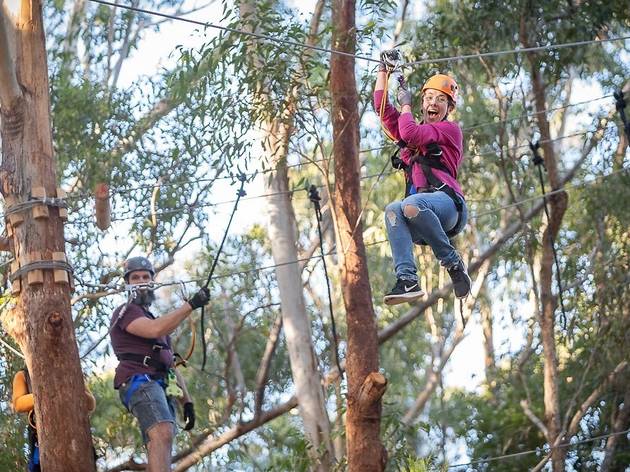 Are you ready for an epic adventure suspended from a line high up in a rainforest canopy? Treetops Adventure Park in the Ourimbah State Forest offers an immersive experience in the bush close up to native wildlife as you climb and zipline among the trunks of soaring Australian eucalypts. After a short training session you’ll be geared up and let loose on a self-guided course navigating obstacles that will test your dexterity and give you a new appreciation for the exploits of koalas. They also have a super-fast ‘roller coaster’ zipline (Treetop Crazy Rider) and a fun series of tree climbs (Treetops Vertical Challenges). Don’t forget to wear gloves, insect repellent and sensible shoes. 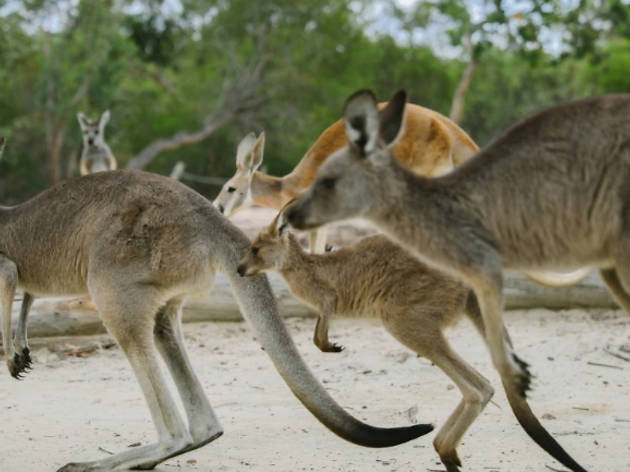 Native creatures that lurk around after dark are in the spotlight at Australia Walkabout Wildlife Park’s Wild Night Out all-ages tours. Grab a torch and follow your ranger into the night and get up close with weird and wonderful Australian animals as dusk falls and they’re at their most active. Play tug of war with the Tasmanian devils and discover the park’s furry, scaly and spiky residents in the trees and undergrowth. If you’d like to stay overnight, you can book into a comfortable eco-cabin and wake with the kookaburras. 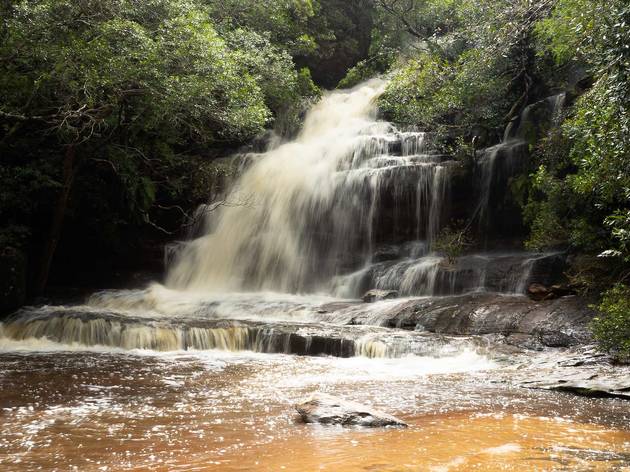 Escape into nature and lose your trail of thought amongst the sounds of cascading water and birdsong on the Somersby Falls Walking Track. This 500-metre return rainforest track takes in views at both the top and bottom of the falls. The path is steep and slippery in places, so be sure to watch your step and keep an eye on kids. If you’re game, bring along your swimmers and have a dip. There's a picnic spot shaded by tall trees with free barbecues and picnic tables by Floods Creek before it descends into the falls, ideal for a pre- or post-walk snack. Just keep an eye out for eager brush turkeys, who may lean in for a nibble of your sandwich if you’re not careful. 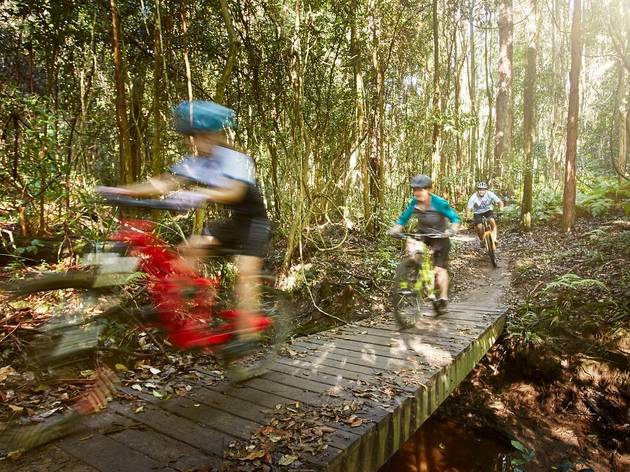 If you prefer a nature experience with a little more action, mountain biking might just be your outdoor adventure fix. Luckily, the Central Coast’s Ourimbah State Forest is just the place for it, promising epic national park trails. Central Coast Mountain Bike Club is a voluntary group who manage the bike trails and are a great resource for maps and other information. If you’re not so well heeled in mountain biking, Central Coast Mountain Bike Tours will help you rough up the tread, rub some dirt in it and become a biking pro of the mountainous variety. They offer all-inclusive mountain biking adventures, bike hire and shuttle buses.