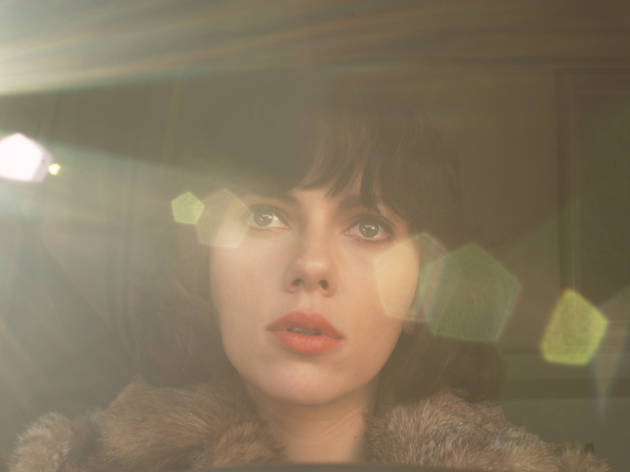 E.T. landed in the cozy suburbs and wanted to go home. Now Scarlett Johansson—or something that looks like her—has landed in modern Glasgow and is thinking about sticking around. (One can only guess that the weather is worse on her side of the galaxy.) Jonathan Glazer’s creepy, mysterious and bold Under the Skin is an adaptation of Michel Faber’s 2000 novel and the first feature in nearly a decade from the director of Sexy Beast and Birth. It’s an intoxicating marvel, strange and sublime, combining sci-fi ideas, gloriously unusual special effects and a sharp atmosphere of horror with the mundanity of a woman driving around rainy Scotland in a battered van.

Dressed in fake fur and what looks like a dark wig, our female visitor scans the locals from a distance, her eyes kindly but free of emotion. Is she curious? Hungry? Horny? It feels like a serial-killer tale as she lures men into her proximity from the side of the street or from the dance floor of a nightclub, always making sure that they’re alone. Occasionally we enter another world entirely: the final moments of the victims, naked men walking into oil slicks in a mysterious black room and drowning. But then something changes, as Johansson’s stranger in a strange land reacts with compassion to a disfigured man and responds well to the kindness of another. There’s a suggestion that this Achilles’ heel is her undoing. All of this is delivered at a leisurely—some will say frustrating—pace. The look of the film moves between the chilly, gliding precison that Glazer perfected in Birth to a more rough-hewn, surveillance-style effect.

Johansson’s performance is necessarily quiet, her look subtly out of this world. She utters her few lines in a refined English accent, while most of the rest of the cast are nonprofessionals. Mica Levi’s score ups the dread level: It sounds at times like a new electronic language being born or a subtle form of communication between aliens. It’s a serious, often bleak movie—a scene of a family faced with drowning is its most horrific moment—but a wry humor stops it from taking itself too seriously. Under the Skin is a story of a predator becoming prey, and it asks us to look at our world with something like the fresh eyes of Craig Raine’s martian poetry, although that element of the film isn’t too labored. Perhaps more interestingly, it offers some provocative views on seduction, sexual power and its abuse. Daring and thoughtful.