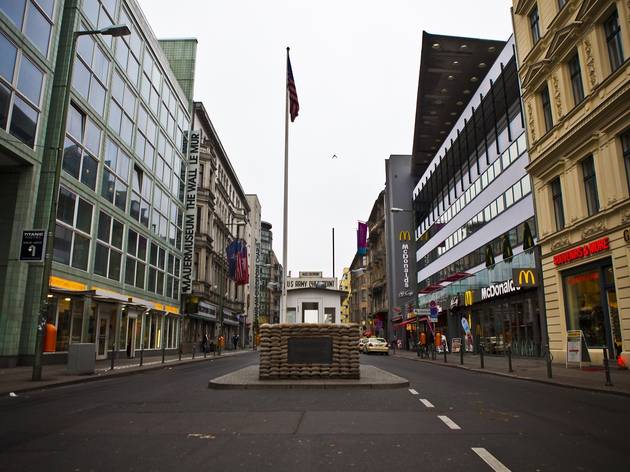 Your Berlin Wall tour begins here, at Friedrichstrasse in central Berlin and at the former crossing point for Allied forces, diplomats and civilians between East and West. Checkpoint Charlie was probably the best-known border crossing and exactly where, in 1961, US and USSR tanks faced off, 100 yards apart and moments from World War III. Khruschev and Kennedy backed down from the brink, the world heaved a sigh of relief, but over the next thirty years, it would be the symbolic flashpoint of the Cold War.

The border was erected in 1961 and designated Checkpoint ‘C’ by the Allied forces and the most central crossing point within the divided city. Periodically reinforced over the decades, following some successful (and unsuccessful) escape attempts, was soon bolstered with additional barriers and deterrents it evolved into a sort of small sprawl of dead land, barbed wire, temporary huts for processing cars and pedestrians and a small guards’ hut.

Today, this nexus of 20th century history is a garish tourist trap, packed with hawkers and street traders offering anything from gas masks, ‘Soviet’ themed tat, fake passport stamps and a gargantuan McDonalds, often hidden behind the procession of coaches which clog up the Friedrichstrasse. At the heart of it all is a small replica of the guard booth, by which visitors can have their photographs taken by bored actors, dressed as period military police.

After years of neglect and questionable decisions by the city of Berlin – not least, the selling off former crossing sites to ineffectual developers and real estate speculators – there seems to be finally a concerted attempt in the works to establish some sort of credible museum on the site. There is, of course, already a museum – the rather patchy Haus Am Checkpoint Charlie, established by Dr Rainer Hildebrandt in 1962 and which has grown from two small rooms to a 2000 square foot museum. Slightly chaotic and dated, it’s more a collection of curios and artefacts devoted to the life and the times of the Berlin Wall, many of which are compelling, but more can (and should) be done to properly commemorate the historical significance of the site. Establishing branches of McDonalds and Starbucks instead has done little to enhance the atmosphere and dignity of this most notorious of city sights. You might as well check out the nearby Currywurst Museum and head around the corner to Charlottenstrasse for a selection of slightly more salubrious cafes and restaurants, away from the fast-food ambience of Friedrichstrasse itself. 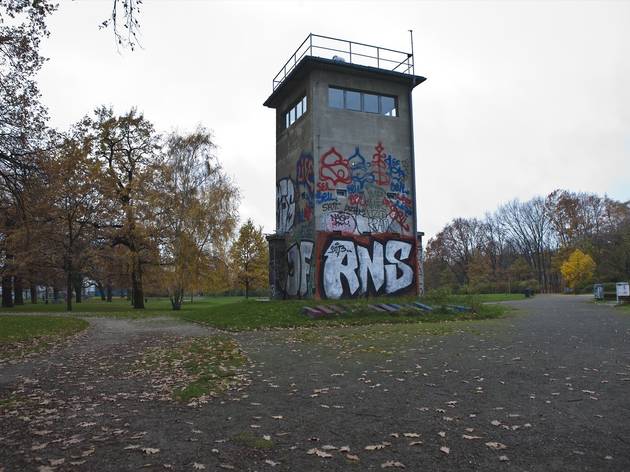 Nestled among the trees of Schlesischer Park, this bleak-looking tower was actually one of 31 central nodes in the sophisticated system of surveillance and tracking along the course of the Berlin Wall. This tower was a Führungsstelle – a command post, meaning it was responsible for the watchtowers and electronic tracking throughout the Friedrichshain – Kreuzberg district. All alarms and emergencies would be relayed here before being passed on to other watchtowers.

Following the fall of the Wall, a rather interesting development took place – the watchtower became a sort of art gallery, offering artists, curators and ‘theoreticians’ the opportunity to undertake fortnightly residencies to create work and ideas that reflected on the structure’s former incarnation as a symbol of repression, surveillance and fear.

The programme, run by Flutgraben collective spans the summer months (check website for latest updates) but nearby on Puschkinallee, a small segment of wall (‘Hinterlandmauer’) still remains. Following your expedition, grab a traditional Berlin afternoon coffee and cake at the nearby Café Goldberg (Reuterstrasse 40) to round off your trip. 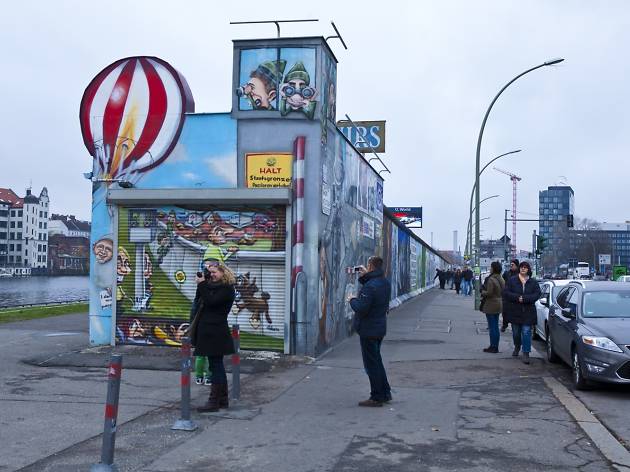 Underfunded, understaffed and prey to the ravages of time and tourism, this 24-year-old institution runs 1.3km between the Oberbaumbrücke and Ostbahnhof, along the banks of the Spree river in Kreuzberg-Friedrichshain. The river, once pressed into service as a death strip beneath the Wall, is now patrolled mainly by backpackers and tourists, snapping selfies, munching currywurst and swigging beers.

Covered with more than 100 murals, graffiti artworks, slogans and tags and run by a collective of Berlin artists, it’s still an essential visit, not only for the murals but also for the pioneering street spirit that was abroad around the city during reunification, at which time, most of these paintings were executed by local and international street artists. These include some of the most memorable images of 1989 Berlin – that infamous painting of Honecker and Brezhnev kissing by Dimitri Vrubel has been restored to all its vivid glory, as well as Birgit Kinder’s equally iconic Trabant-bursting-through-the-Wall.

Today, the Gallery itself is beginning to look as anachronistic as the Wall itself, with its slightly forlorn, weatherbeaten murals slowly being obscured by weathering, air pollution and endless scribbled messages from tourists. Also, the new reality of Berlin is rising all around – the encroaching sleekness of such carbuncles as the vast O2 World Arena complex across the river and new apartment and office blocks is a poignant reminder that the rough, edgy DIY punk ethic that drove so much of the city’s famed vibrancy, is seriously under threat.

If you elect not to purchase a suspect sausage from any of the vendors around the gallery, head to Freischwimmer at nearby Schlesischen Tor, for a relaxed lunch or snack in a picturesque riverside café/restaurant. 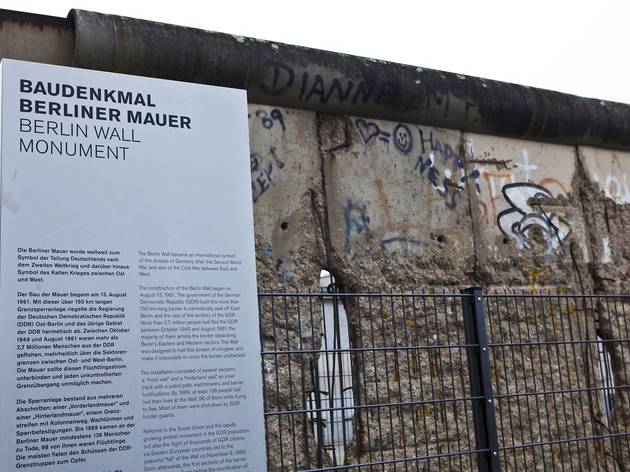 Near to Checkpoint Charlie in Mitte, Niederkirchnerstrasse is an intriguing microcosm of 20th century Berlin history. Not only is it home to one of the longest expanses of remaining Wall, running down its southern side, but in its former incarnation as Prinz-Albrecht-Strasse, it was the headquarters for the Nazi Gestapo and SS during the 1930s.

A visit to Niederkirchnerstrasse therefore, enables the savvy visitor to not only gawp at some genuine 1970s masonry but also visit the chilling ‘Topography of Terror’ exhibition, an open-air museum immediately behind the preserved section of Wall, detailing the grisly activities of the SS torture chambers, beneath the former headquarters.

Restore your faith in humanity afterward at the Martin-Gropius Bau museum – a vast art gallery and museum that dates back to 1881 and features an excellent programme of international contemporary art exhibitions as well as featuring a really rather lovely café and restaurant.

With black irony, it was on this street in June 1961, at the House of Ministries that then-DDR head of state Walter Ulbricht insisted that ‘No one has any intention of building a wall’. Two months later, Berlin awoke one August morning to find the city divided, almost entirely overnight. Between 1961 and 1989, the Wall was revamped at least four times, and here, you can find the fourth and final major ‘edition’ of the Berlin Wall, dubbed the ‘Grenzmauer 75’ model. This was a barrier designed to withstand almost any kind of impact and (almost) as important, present a clear and aesthetically powerful image of strength and resistance to the decadent West.

Despite being one of the few last standing sections of Wall, the city’s decision in 1990 to classify it as a historical monument was greeted with derision, with locals attempting to smash the structure into smithereens. DDR engineering prevailed and despite a coat of scuffs, holes and dents, the barrier holds firm, testament to the pioneering architectural prowess of the Soviet era. 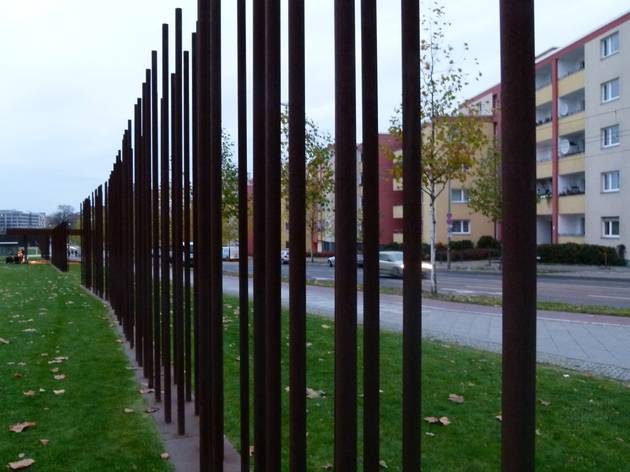 On this particular street, in August 1961, neighbours woke up one morning to find themselves in a different country from those on the opposite side of the road, as soldiers brandishing bricks and mortar started to build what the East German government referred to as the ‘Anti-Fascist Protection Wall’. Today, 23 years following the Mauerfall, Bernauerstrasse is an essential visit for anyone even remotely interested in finding out more about why and how this happened.

Rather than lease land to entrepreneurs and developers, as was the case at Checkpoint Charlie, the city of Berlin made a wise move post-Reunification in buying up and preserving the land around Bernauerstrasse, on the Mitte/Wedding border as a memorial to the border crossing that had occupied the space between 1961 and 1989.

It’s probably the most rewarding and dignified Wall site in Berlin today. Complete with restored death strip, guard tower and examples of fortifications and deterrents, the memorial is a sobering experience that thankfully, isn’t all about offloading toy Trabants, wall-fragment keyrings and novelty T-shirts.

This is a multi-layered experience, that begins around the Nordbahnhof S-Bahn station (which also features a fantastic ‘Ghost Stations’ exhibition, detailing how the city’s U-Bahn was reconfigured during the DDR era). Here, a visitors’ centre sits across from an extensive research and documentation centre, where you can pore over maps, video presentations and records of the death strip, watchtower and border fortifications. It’s the best place to get a sense of just how brutally Berlin was severed.

With the in-depth documentation, copius amounts of testimony and recorded memories available, the physical memorial becomes even more poignant to encounter. Steel metal rods delineate the route of the Wall leading up toward the U-Bahn Bernauerstrasse and in a grassy former death strip, neat archaeological features show the remains of submerged buildings, barriers, security features and other devilish deterrents. From the centre’s tower you can look down over the Wall and the Kapelle der Versöhnung (Chapel of Reconciliation). Come on a Sunday and you can meander Eastwards along Bernauerstrasse towards the Mauerpark (‘Wall park’) where the city’s legendary open-air fleamarket takes place from early in the morning to late afternoon.