The war is definitely over. Caitlin Spencer eats, drinks and goes on a history tour in the capital of Europe’s Bosnia and Herzegovina

It’s been 20 years since Sarajevo suffered the longest city siege in the history of modern warfare. Between 1992 and 1996, for 1,425 days, Bosnian Serb forces killed almost 14,000 residents and destroyed a plethora of buildings as international audiences looked on in horror and disbelief. It was a dark period for the capital city of Bosnia and Herzegovina, known, due to its beauty, as the ‘Jerusalem of the Balkans’. In fact, it was a dark period for the world as a whole.

But that was two decades ago. And, in the immediate aftermath of the destruction, Sarajevo was hardly a hotspot for tourists, not least for the landmines which were dotted around the countryside. However, in the past few years, as a result of a lot of rebuilding and restoration work, it’s once again got the travel pilgrims flocking its way. So we decide to join the throngs to see whether it really has again become one of the most peaceful and accepting cities in Europe.

This is certainly apparent, from the moment we set foot in the city. Sarajevo is a melting pot of cultures. Its architecture is an eccentric and intriguing amalgamation of Ottoman and Austro-Hungarian styles, so much so that you can stand in a place that feels like Istanbul, Turkey, and turn around and think you’re in Budapest, Hungary. Around the corner, you’re in Vienna, Austria, and further on it’s Rome, Italy. Then you buy some food, pay in the local currency, the Bosnia Herzegovina convertible mark, and decide that, really, you’re just in a Central European urban paradise.

Sarajevo was once the only place in Europe where you could find a Roman Catholic church, an Orthodox church, a mosque and a synagogue all in the same neighbourhood. Today, adherents from all the major religions coexist peacefully. In fact, most people, whether religious or not, seem peaceful and friendly in this city, showing it couldn’t be safer to visit Sarajevo now that the dust has settled over 20 years. They are warm and welcoming hosts, as we find on our trip. Here’s our tips of where to eat, drink and visit in this majestic metropolis…

What to see in Sarajevo 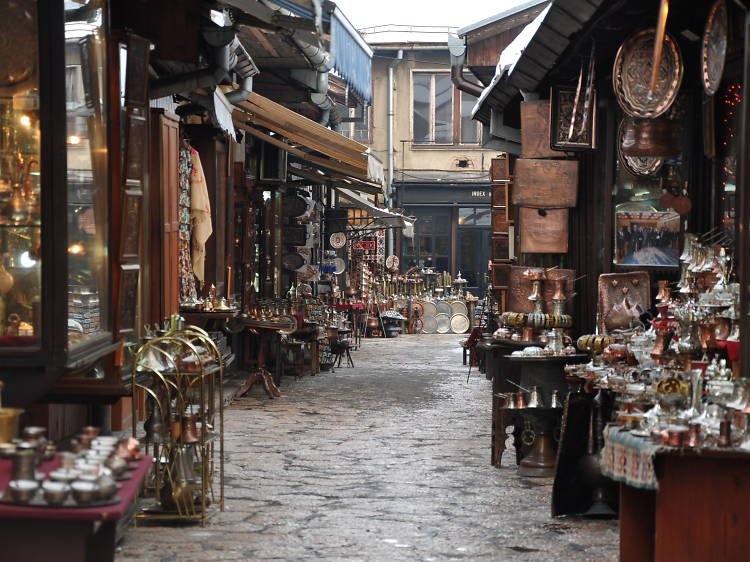 One of the best ways to get to know a place is to go on a walking tour. And nothing beats a free one. The tip-based three-hour stroll with a local Sarajevan by the name of Neno is highly recommended. He goes into detail about the capital, from its first mention in the history books to the 21st century. From the Roman Empire and life under Ottoman rule to the assassination of Archduke Franz Ferdinand that sparked the First World War, the death of revolutionary Tito, the Sarajevo siege and life today, it’s all covered in this cross-city tour. To take part, book online and receive an email with the meeting time and place.

If you want to stroll alone, however, we recommend wandering the streets around the Bašaršija bazaar (Sarai 8), which was built in the 15th century. This is Sarajevo’s historical and cultural centre and is also the largest market in the city. Having once been an important trade hub, this area is dotted with inns, craft stalls, haberdashery markets, food traders and coffee shops. It’s got a distinctly Turkish feel.

Of course, you can’t escape the atrocities that occurred in the 1990s. We pay homage to those who died and we suggest you do too. The best way to do this is to visit the Srebrenica Exhibition at Galerija 11/07/95 (Trg Fra Grge Martica 2/III, +387 33953 170), a mixed-media gallery that documents the mass genocide and the events that occurred following the capture of Srebrenica town on July 11, 1995, where 8,372 residents were massacred. It’s well worth shelling out the $8 for the guided tour. You can’t fail to be moved by the wall which contains the names of the victims written across it.

Also trek to the Tunnel of Hope (Tuneli 1, +387 33778 672) and visit the underground walkway that connected the people trapped in Sarajevo to the UN-controlled area of free Bosnia, just beyond the city’s airport. The tunnel allowed the transport of food, medicine and supplies into the city, as well as allowing people to get out. The first 25m is accessible. The rest has been sealed up as it runs under the runway. It’s $44 to get in but well worth it, as is the Olympic bobsleigh and luge track (Apelova Cesta, on the southeastern edge of the city). After the 1984 Winter Olympics, the track was used as a sniper location by the invading forces. Today it’s a street art exhibit. Start at the bottom and walk up the paths to the top so you can look out over the city. It’s free to visit but a guide is advised just in case any landmines are still in place near to the paths.

What to eat in Sarajevo 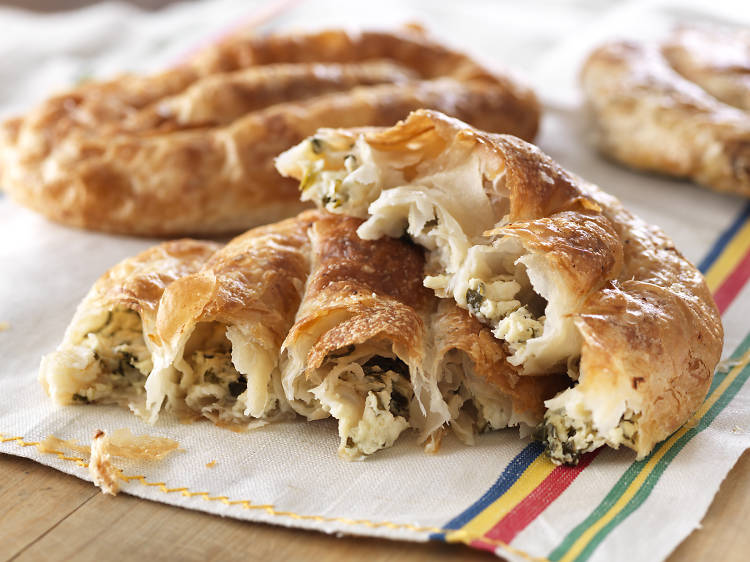 What to eat: burek. Where to eat it: everywhere in Sarajevo. Burek is a baked treat with flaky pastry and a savoury filling of, usually, ground beef but there’s also spinach, cheese and other meats to sample. It’s found all over the Balkans but Bosnian burek in Sarajevo is a special experience. There are so many tiny restaurants that serve it with yoghurt. We recommend the eateries that sport stools which seem to be a mere 30cm off the floor. A burek and yoghurt costs, on average, about $17 and fills you up for hours.

For a historical foodie experience, head to the open-air Pijaca Markale market (Mula Mustafa Baseskije, +387 33214 954). This is the centre of Sarajevan life. Before the siege, it sold primarily food and drink. During the conflict it sold anything and everything to help the people survive. It’s now back to the olden days, serving mostly local food and beverages. An array of treats are on sale and the marketeers, who mostly don’t speak English, are a friendly bunch. There are so many fresh berries of all colours to try here and some stall-owners even give you handfuls for free. Mind you, for about $7, you can buy what seems like your own weight from them.

What to drink in Sarajevo 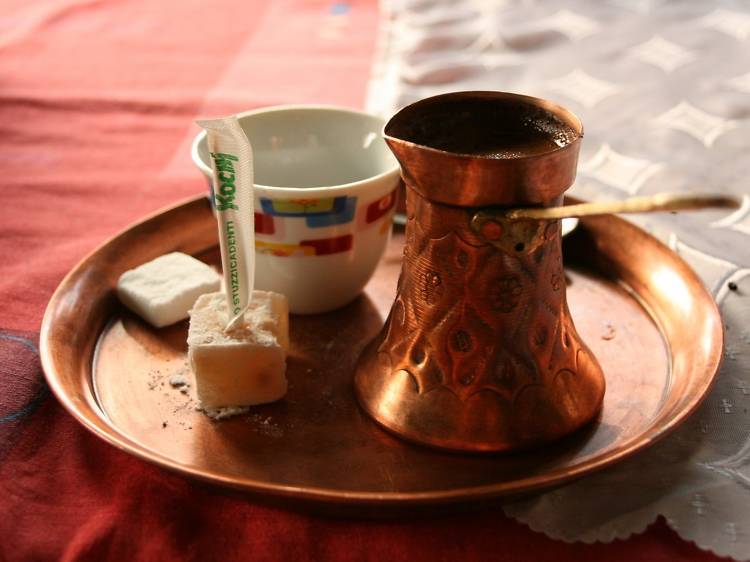 Bosnian coffee is part of the country’s culture, history and national identity. It comes from Ottoman Empire influences but has a distinct flavour all of its own in Sarajevo. It’s served piping hot and sipped along with a glass of ice cold water, which results in a smooth taste experience. For the best coffee, costing just $9 a cup, visit Kua
Sevdaha in Sarajevo’s old town (Halai 5, +387 33239 943).

For the best beer in town, though, visit a former cinema. The Kino Bosna (Alipašina 19, +387 61866 946), was forced to close its doors during the siege but has today become one of Sarajevo’s most famous bars. It’s also a nightclub and live music venue, run by a woman who used to sell tickets to adult movies but now lives in the projector room. Sample the local beer at the cinema bar for $9 a litre.

So, beer, berries, pastries and coffee, historical exhibitions, cultural tours and artistic representations of one of the worst sieges in history. Sarajevo has it all. It’s recovered from its tragic past and is looking forward to a future where tourism is one of its major industries. And now is the time to go. It’s super-cheap and there’s so much to see and do. That dreadful war in the 1990s is over. But the battle for tourism in the Balkans is only just beginning. 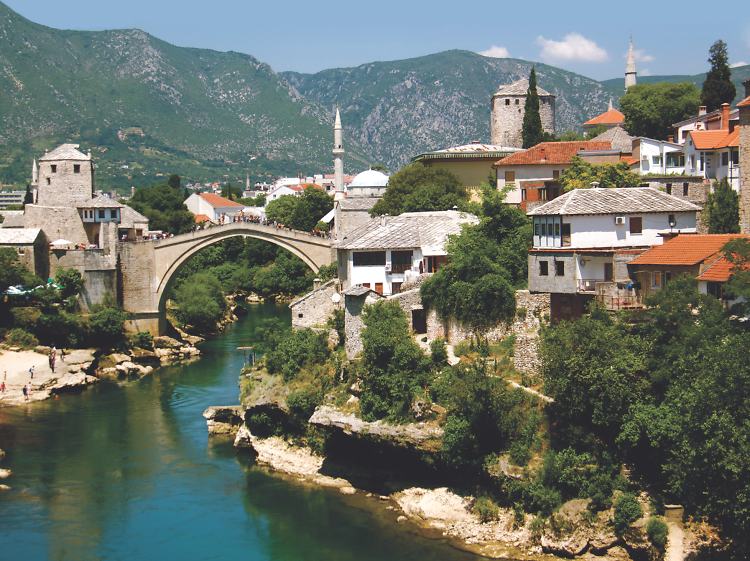 Roundtrip flights to Sarajevo from Hong Kong with Turkish Airlines start at $6,500. There’s one change in Istanbul. 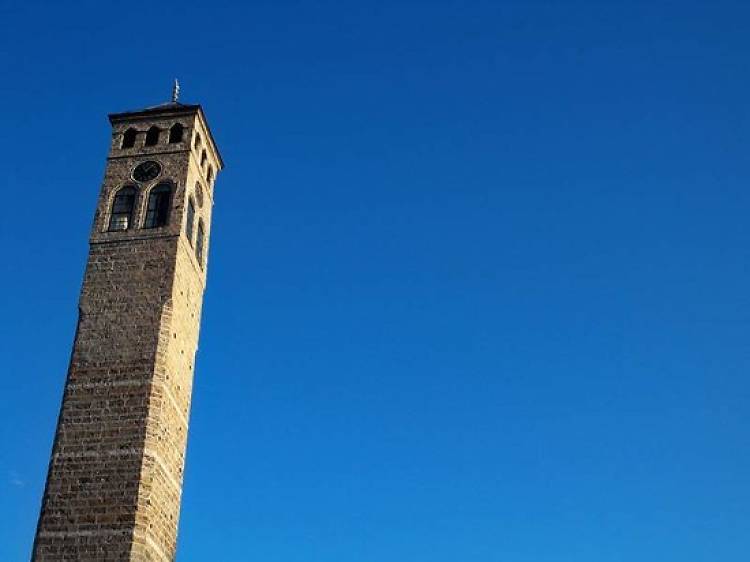 Budget travellers should opt for the Doctor’s House hostel (Pehlivanuša 67, +387 61222 914). It’s owned by an American woman who was travelling the world and decided she couldn’t leave Sarajevo, so she married one of the city’s most famous musicians. Private rooms cost from $310 a night. The beautifully decorated shared dormitories are $78 a night. Everyone gets access to the fully stocked kitchen, rooftop, back garden, lounge and free tea and coffee.

For the non-budget traveller, look no further than Hotel Colors Inn (Koševo 8, +387 33276 600). This modern and bright hotel offers great rooms and a free breakfast buffet. Prices start at $620 a night for a double room.