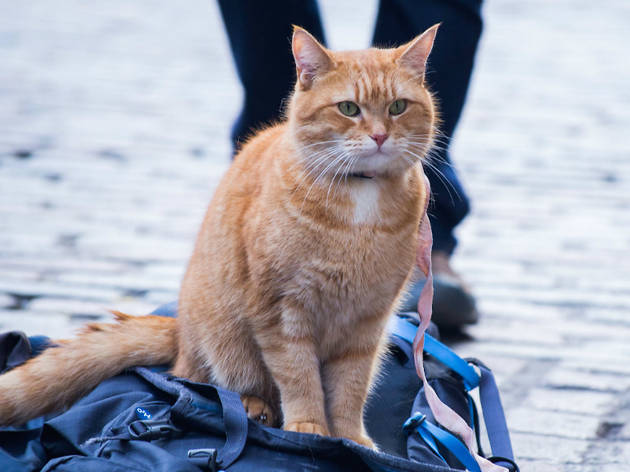 Bob is a handsome marmalade tomcat. You might have seen him around. His human is James Bowen, who was busking, selling The Big Issue and recovering from heroin addiction when he found Bob on his doorstep in 2007. Bob followed James on to the bus one morning and became part of his pitch outside Angel tube.

‘A Street Cat Named Bob’ tells their story. Luke Treadaway gives a lovely, sensitive performance as James. Bob, feeling no other cat could do him justice – the diva – plays himself (with the help of some stunt doubles). The thing is, and there’s no way of saying this nicely, Bob’s acting is not exactly the cat’s meow. Aloof and borderline moody, he spends most of the film with the grumpy expression of the Queen opening parliament. Really? This? Again?

There’s a telly-ish feel to much of ‘A Street Cat Named Bob’, an attempt to sanitise life on the streets. Some of the side plots are deeply unconvincing, such as James’s relationship with his kooky vegan neighbour. But it’s impossible to watch a film about a happy-ending story like James and Bob’s without a warm glow – a literary agent spotted them outside Angel and James’s memoir became an overnight bestseller.

There are some nice touches too, like the lady with a Waitrose carrier bag who tries to buy Bob from James for her son. ‘How much for your kid?’ he snaps back.