Attention 'Adriatics': Albert Adrià has opened Pakta, the result of his go at 'Nikkei' cuisine - Peruvian cuisine influenced by Japanese immigration. This is coming a few months before the June opening in the Raval of Adrià's Mexican restaurant, Yauarcán.

What's behind your opening Pakta?
Peruvian cuisine is trendy at the moment, but I don't believe it's temporary - it's here to stay. Japanese Kyoko Li and Peruvian Jorge Muñoz were already working with me, and we said, 'Let's make a restaurant like this!'

Do you think this style will be a hit here as it has been in Madrid?
That's why I love Nikkei. If I open a Peruvian restaurant, I'm asking for trouble. Same with a Japanese. But with a Nikkei place, I can move between the two cuisines, and I have more freedom.

Do you think the result is closer to Japanese or to Peruvian cuisine?
We started working with traditional Japanese and Peruvian cuisines separately. And then we mixed them. And the result is a third style, which is Adrià-filtered Nikkei. As with Tickets, it will be the customers who decide which way we go - but with our own touch, of course.

What will be Pakta's top priority in the medium term?
The style and quality of the nigiri. With just a bit of time we can create a new language - very powerful, very new. We make nigiris with dewlap, squid, salmon with yellow capsicum sauce... You won't be coming here to eat tuna nigiri.

How many portions will the tasting menu have?
About 22. It'll cost around 100 euros, drinks included, and you'll have quite a good time in those two hours.

According to Restaurant Magazine, the best restaurant in the world is in Denmark. But the chefs look toward the south. Curious, isn't it?
They're emerging, lesser-known countries. They've got the product, and without that there's no cuisine. With all due respect, you'll find everything in Peru that you can find in Denmark. And there's a great variety of vegetables, but it's the sun, the soil pH, that gives us the acidity typical of Scandinavia. Mexico, for example, will be more likely to have a wealth of young and talented chefs with a clear vision for a powerful kitchen. By the way, in the past, restaurant guides were written to help you get to know a place. Now they confirm what you already know. I don't work for awards, but if someone wants to give me one, I don't have a problem with that! But having a full restaurant is better than any star.

What will your Mexican restaurant be like?
It's actually already in the works. It will have a capacity for 50 people and a bar where you can eat as well. If I open another Tickets I'll be in trouble, because I don't know if I can feed more than 50 people. The bar will have a capacity for about 200 all day long. And downstairs there will be an area for tacos and mescal called The Den that holds 150. It'll be like something out of a Robert Rodríguez film, a real 'From Dusk Till Dawn' atmosphere.

Is doing so much in so little time a result of your having taken the helm by yourself? Do you want to branch out in every direction now that you can?
No, I have no desire for that. But think of newlyweds who plan their future: they have three kids under five years old and their job's done. I take advantage of the synergy of opening a site to then open another. And I have the job done in a year. It's a huge effort, but I do it all at once. I've done it all in one year, but it took a lot longer in my head. 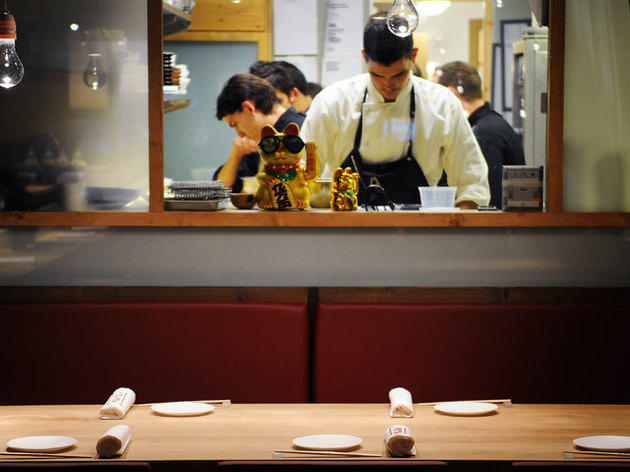 Albert Adrià's second eatery in Barcelona is a 'Nikkei' restaurant – a cuisine that was born in Peru out of the mix of indigenous cooking and Japanese immigration. Adrià has run Nikkei cooking through his own filter to come up with surprising dishes, such as a fusion of maki and Peruvian 'causa' of smoked mackerel, or salmon nigiri with yellow capsicum sauce. In Czech, 'pakta' means 'together'.