The swarm of buildings and streets built into a grid that make up the Eixample make it recognisable from a bird’s-eye view. Separated on the right (‘Dreta’) and left (‘Esquerre’) by Passeig de Gràcia, the sprawling Barcelona district is characterised by chamfers, Modernista buildings of great artistic value, and streets designed according to rule and rationale. Perhaps this is a superficial portrait of what’s really going on in this part of the city, which, although one of the most populated, has a distinct lack of public squares and green spaces, and rental prices are escalating. 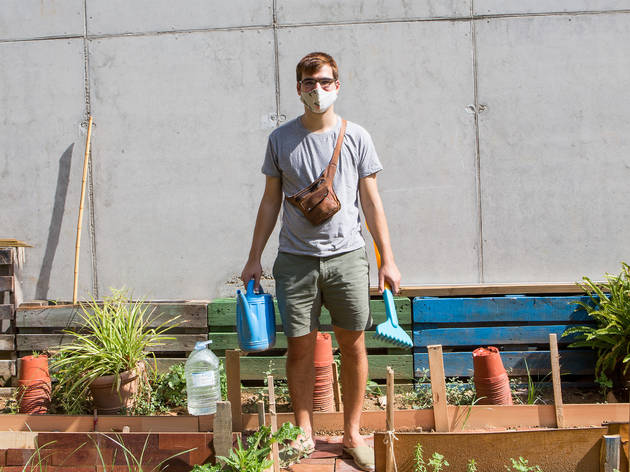 The Eixample is marked by the plan laid out by architect Idelfons Cerdà in the mid-1800s, one that’s changed over time since Cerdà imagined most of the inner courtyards of apartment blocks as large parks to be used and enjoyed by the residents. These days the Eixample is at risk of becoming a neighbourhood losing its identity, with an increased focus on tourist flats and the death of local businesses. But within the enormous expanse there’s a small oasis that resists and perseveres: it’s the Espai Germanetes–Jardins d’Emma in the Esquerre de l’Eixample, and it’s a unique case study in success in Barcelona that’s based on the self-management of spaces by the neighbourhood’s residents. The star of the show is an urban garden. The supporting cast is made up of a hundred neighbours who look after the spot where the Germanetes dels Pobres (which means ‘Little Sisters of the Poor’) convent once stood. One of these cast members is Joan Marc (who goes by ‘Jota’), who we find to be brimming with energy and passion for this project he knows so well and has been a part of from its outset, as he opens the doors for us to an orchard that cultivates not just tomato plants, but also an important feeling of community. 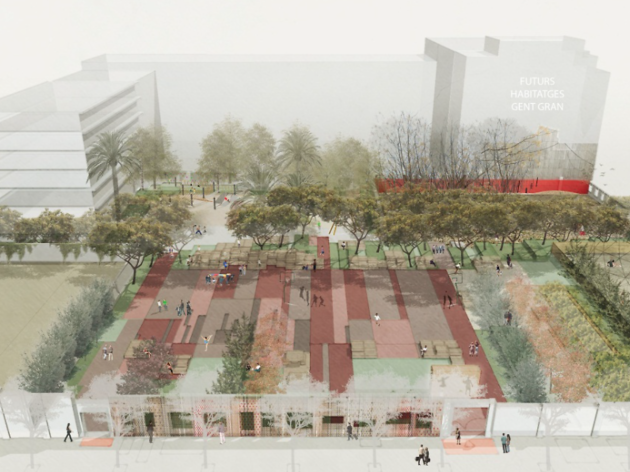 Few city blocks in the Eixample can be made over starting from zero unless the owner is a private developer. This is not the case when we’re talking about the block that the Germanetes dels Pobres convent occupied almost entirely – 5,500 square metres of land that in 2001 went back to the drawing board. The keys to the site passed from hand to hand, first to the Hospital Clínic, then to the Ajuntament (City Council), which actually came up with a plan that was very similar to the current one and, finally, fell into the worst hands of all: none. The plot was abandoned.

It was then that seed of the Germanetes project began to germinate, and it did so through a neighbourhood assembly created during the mobilisation of the anti-austerity movement in Spain also known as the 15-M Movement (it started on the 15th of May, 2011), and ended with a concession to manage 585 square metres of the plot. ‘That was our first win,’ says Jota with pride. ‘It was the beginning of everything, when we decided to stand up and tell the City Council that we existed and that, even if it didn’t seem like much, that little piece of the neighbourhood would be for the residents.’ On January 24, 2014, the urban garden and community spaces opened for the first time, and a new way of understanding the neighbourhood began to flourish. 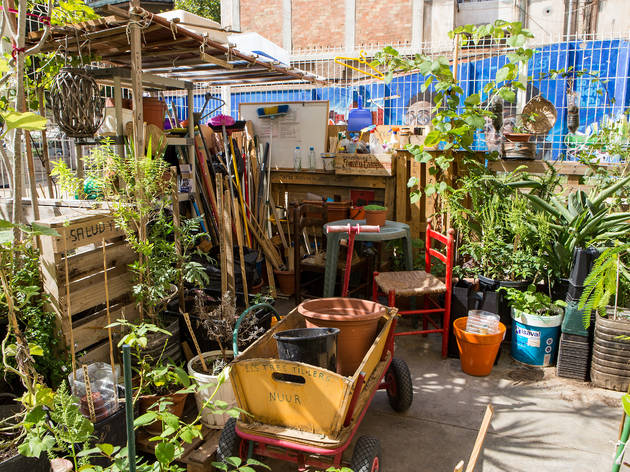 Nearly seven years have passed since that small but great victory that garnered an urban garden and multipurpose outdoor space. ‘We were a small corner of a large lot that we all identified as our home and that was already wonderful,’ says Jota. ‘It was only an embryo then and we needed to open up even more, weave in more of the neighbourhood fabric, and make a push for the project to be completed.’ The project in this case is the plan devised by the City Council that includes the construction of social housing for the elderly, a secondary school, a children’s nursery, and the fitting-out of the Jardins d'Emma (‘Emma’s Gardens’). Seven years later, 80 percent of what was promised has been completed, and in October 2020 the nursery is set to be inaugurated, leaving only the apartment buildings to come, the works on which are currently at a standstill due to non-compliance with the construction company. 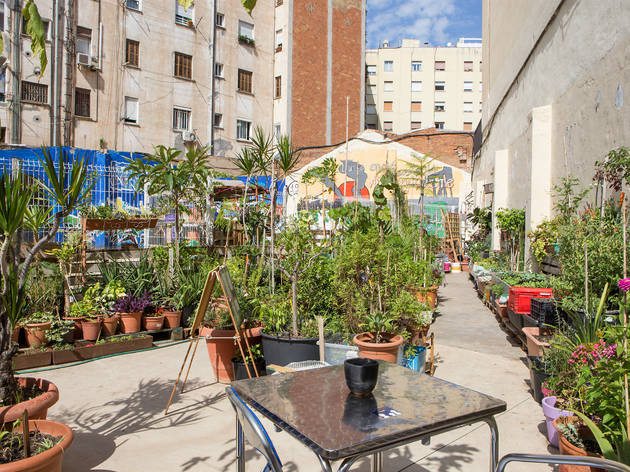 The transformation of the site began in 2014 with the construction of the Institut Viladomat secondary school, and since then, activity at Espai Germanetes hasn’t stopped. ‘The farmer’s market held every Saturday is the other jewel in the crown,’ says Jota. ‘Many people come along, the vendors are very happy, and for us it’s the electricity that powers up Germanetes.’ Every second and fourth Sunday of the month they schedule Sunday ‘vermouths’ (you get more than your tipple), with workshops, a shared paella meal, concerts and shows.

If the farmer’s market is the electricity, the urban gardens (Espai Nur, Aula Viva and Germanetes) are the gears that make the entire association (with about 130 volunteers) hum along. ‘Right now we have more than 100 different species of plants,’ says Jota. ‘We want a greener and more thriving neighbourhood, and that’s why it’s important that we invest ourselves in these spaces that belong to everyone where we can gather together. This is how we move beyond being just a bedroom community.’ 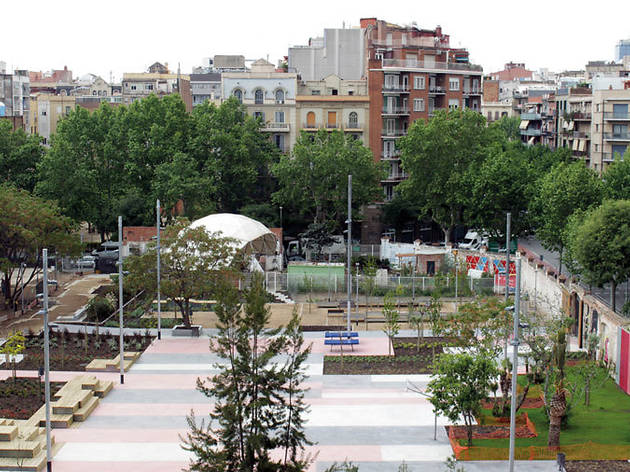 ‘Lockdown was a wake-up call for Espai Germanetes,’ says Jota. ‘Lots of residents realised there was a garden near their house where they could be in touch with nature, even if it was urban.’ Despite this, Germanetes was affected in terms of cultural and event programming, even though it was a place of refuge for the elderly to enjoy themselves while taking care of the garden or the Jardins d’Emma, the only interior courtyard in Barcelona that depends directly on the residents and not on the city’s Parks and Gardens department. Not only did the neighbours find a respite in the garden, but they also participated in initiatives such as the Xarxa d'Aliments (‘Food Network’) promoted by the Casal de Joves Queix, which works to help vulnerable families and brings food to elderly people who aren’t able to leave their homes. 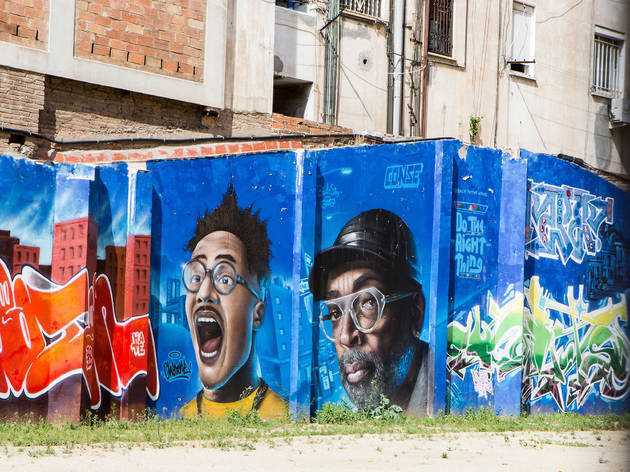 Espai Germanetes is ready, like everyone else, to get back to what life was like before, with its bustle of people of all ages, weekly get-togethers, markets, gardens and open space. ‘Our priority now is for them to finish building the flats for the elderly so they’re no longer a hole for rats and dirt to live in,’ says Jota. ‘After that, we want to expand the garden space and move forward with the art project Urban Nur Gallery on the walls of the Espai Nur.’ All this with a view to transforming the space into a friendly, lively and active meeting point for the residents of the Esquerre de l’Eixample.