The barrio of Gràcia throws Barcelona's most popular Festa Major (basically, a big street party that goes on for days and days) of the year. A huge attraction is the effort the neighbours put in to decorating their streets for bragging rights of having done the best job. A tip: Wander the streets during the day to see the most decorations and avoid the sometimes overwhelming crowds at night. It's also best to check out the street dressings earlier in the week in case the elements or over-excited revellers disturb the works of art. There's also a packed programme of concerts, events and activities, so to help you out, we've made a selection of our favourites. Get over to Gràcia and enjoy the fun and festivities any or all of the seven days of the festival.

Map of decorated streets and squares

Click or tap on any point or line to find out about the decorations in each street and square! 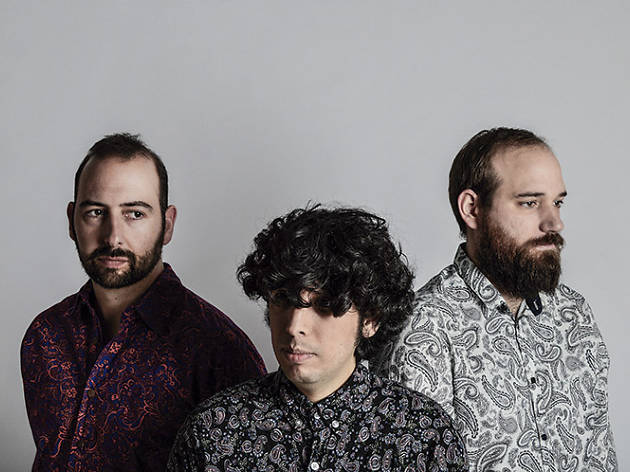 The summer festival at Gràcia's Heliogàbal club, which is on during Gràcia's Festa Major, brings us this live performance from the singer-songwriter with a punk spirit Joan Colomo, along with his band, who will play only versions of the best songs from theme radio stations from yesterday, today and always: from Camela to Sabrina, including Raffaella Carrà and even Beyoncé. Rounding out the show are the prolific Barcelona musicians Las Ruinas, with their inspired fifth album, 'Toni Bravo' (2014), a new group of long songs with punk distortion and humour where the trio sound more shiny and pop – yet at the same time sadder – than ever, and the always welcome, wild and indomitable Dofí Malalt. 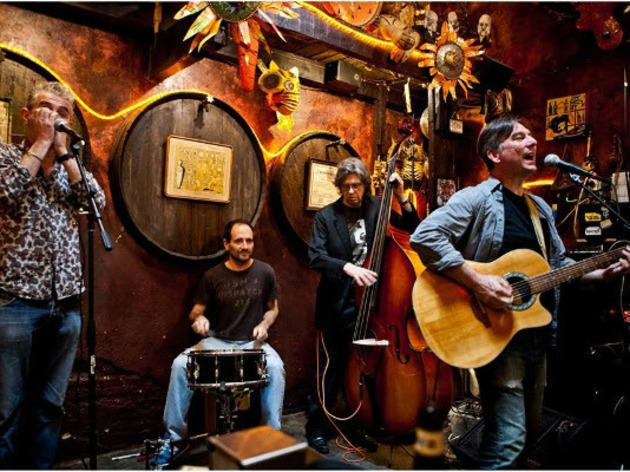 The members of Barcelona-based acoustic trio Frogs for Snakes hail from the States (guitar/vocals) and England (bass and harmonica). Together, their music is anchored in the blues but encompasses a wide range of musical styles. The sound is both rootsy and contemporary, with a repertoire of their own spin on songs by artists that range from Robert Johnson to Wilco and Portishead, along with original compositions. 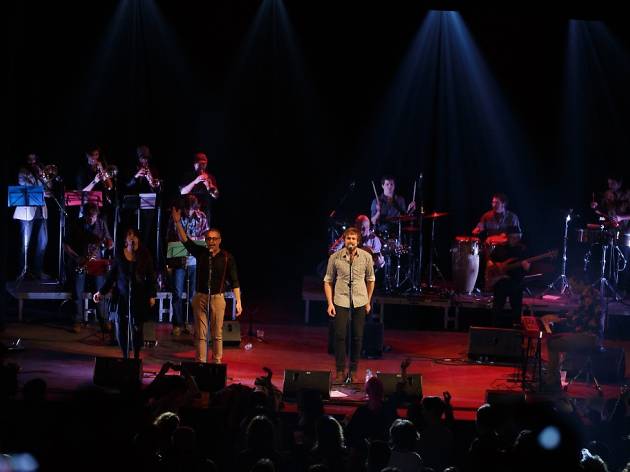 Derrumband started out in a rumba party that reunited friends to play and record Gato Pérez songs. The group kept working along those lines and bit by bit gathered up a repertoire that gave a new vision of the most emblematic songs by the great 'Gato'. Some time has passed now between that meeting of friends and when they recorded the music on an exclusive CD, 'Derrumband & Los Amigos de Siempre'. They do it unpretentiously, but with a big show. 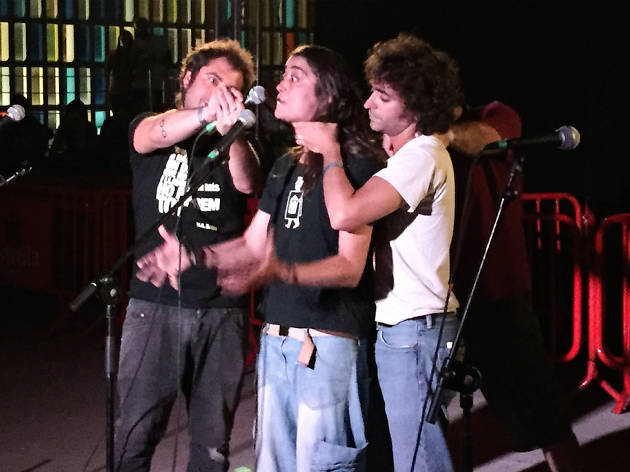 'Anarchy is independence' is a show based on cheap archetypes and evolutionary psychology, according to its own creators. Four poets, singers, performers, four flying dancers throwing out phrases like daggers, launching verses that are dynamite for the soul. Núria Martínez-Vernis, David Caño, Roger Pelàez and Martí Sales. 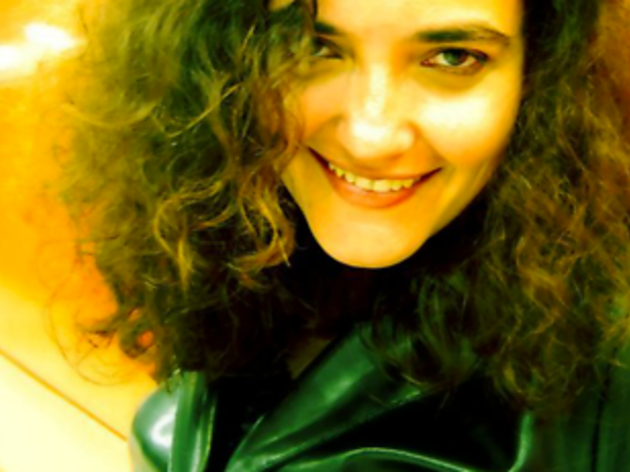 'Dona cançó' is a project that brings together creative women in the worlds of music and the performing arts. A sample of projects based on the figure of the woman is presented this time in the Gràcia festival with a show in the Plaça de les Dones del 36 that brings four artists to the stage to share their projects: La Rateta que escombrava l'escaleta; Alicia Martel; Magalí Sare & Marta Pons; and Dúo Marlas, made up of Marta Payo & Laura Powell. 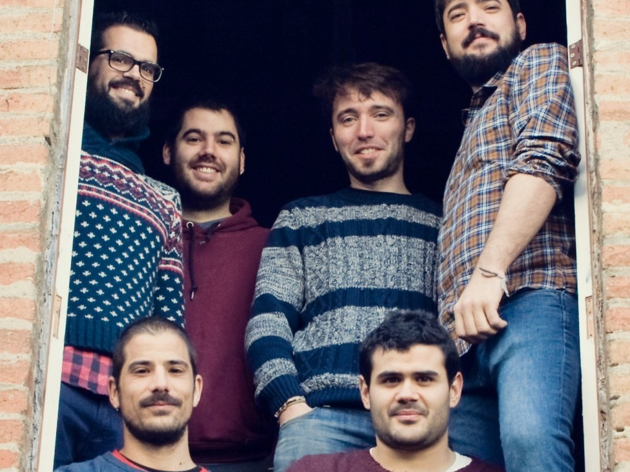 'Abans tot això eren camps', the new album from RIU, is fresher and closer, and full of their own compositions. In line with their previous albums but with an emphasis on their choice of a repertoire that's close geographically and sentimentally, this band from Barcelona show signs of maturity with this third album, which features new songs that complement the band's sound. 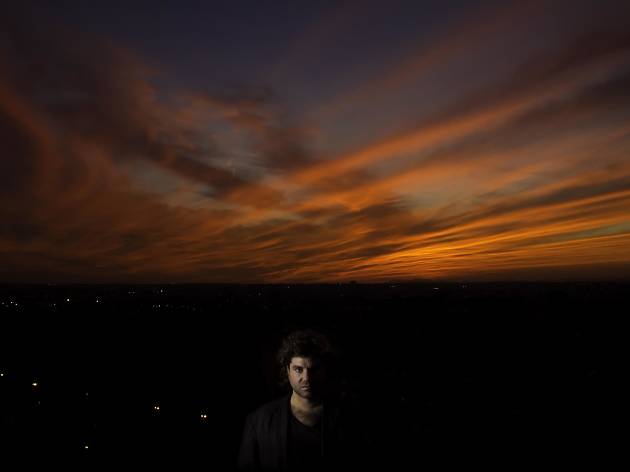 It's the final day of the Festigàbal concerts with a triple bill featuring techno troubadour Joe Crepúsculo, presenting his seventh album, 'Nuevos Misterios' (2015). The album showcases the artist at his most danceable, with influences from '90s house and urban latin and tropical sounds, and features a list of top collaborators such as La Bien Querida, Tomasito, Soleá Morente, Luciana de la Villa & Sergio Pérez (Svper) and La Prohibida, among others; Mujeres present 'Marathon' (2015), the third LP from the Barcelona group, one of the best garage bands ever to come out of the city; and the quartet Barcelona Rombo presents their debut, an album recorded and produced by David Rodríguez (beef, La Bien Querida), full of pop with guitars, low fidelity and infectious loops. 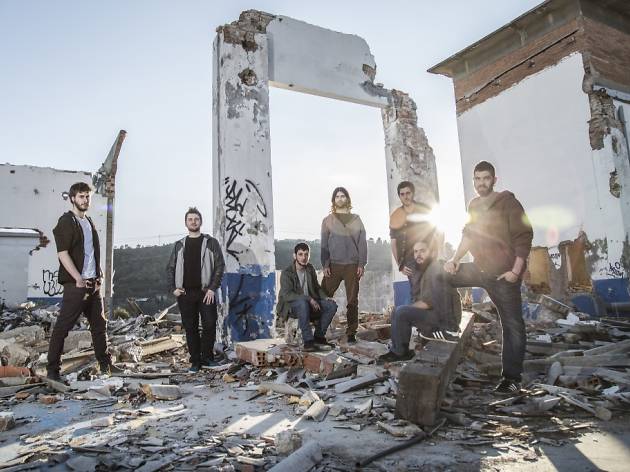 The journey is just beginning, and Itaca Band is ready. With a powerful and energetic live show, the Catalan band's sound ranges from cumbia to ska, with a reggae starting point. You'll dance, sing and/or have a great time, but you won't be able to stand still. And the next day you'll find yourself tapping your feet to their beat. It's quality and high-energy festive music, and having a great time on stage is their main goal. 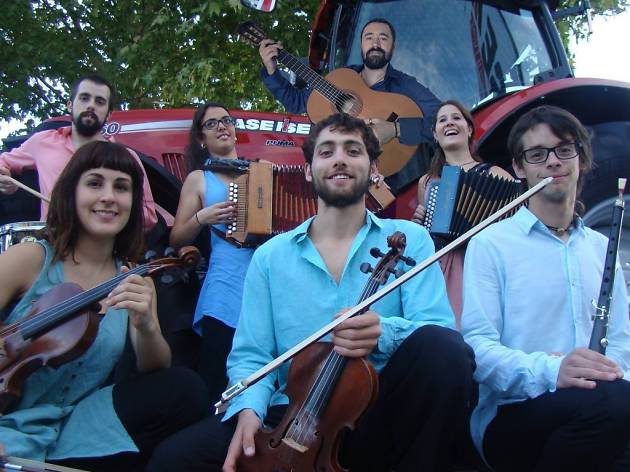 It's a double session of concerts to celebrate 15 years of the weekly 'L'Independent de Gràcia', with NewCat_ètnic and Orquestrina Trama. NewCat_ètnic is the second production out of Newcat, a mixed ensemble that unites the sound of traditional Catalan instruments to their own sound universe of other musical languages that articulates a distinctly ethnic project in order to promote the talent and creativity of the musicians involved. Orquestina Trama started in mid-2013 between Cerdanya and Alt Urgell. The members of are a group of young people strongly connected to traditional Pyrenees music and culture, as they have the privilege to grow up, learn and live there. Their dream is to revive melodies and songs hidden behind the mountains that define the best way of living and understanding that particular world. 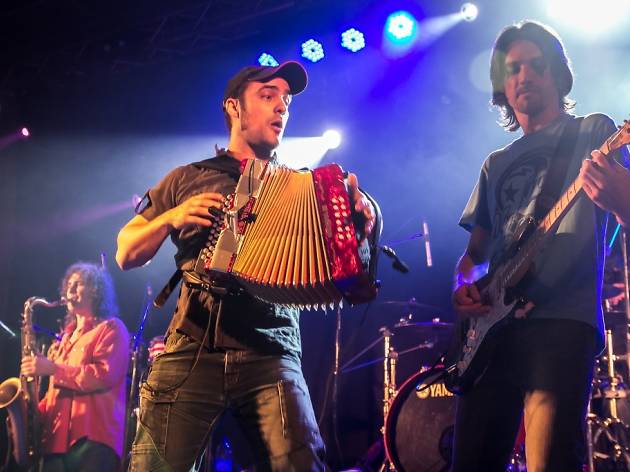 La Troba Kung-Fú chose and claimed Catalan rumba as the musical language that shows the roots of their origins. They started forming the new line-up of the group with musicians – both gypsy and non – led by Joan Garriga, who writes the songs, sings and plays the accordion in the group. 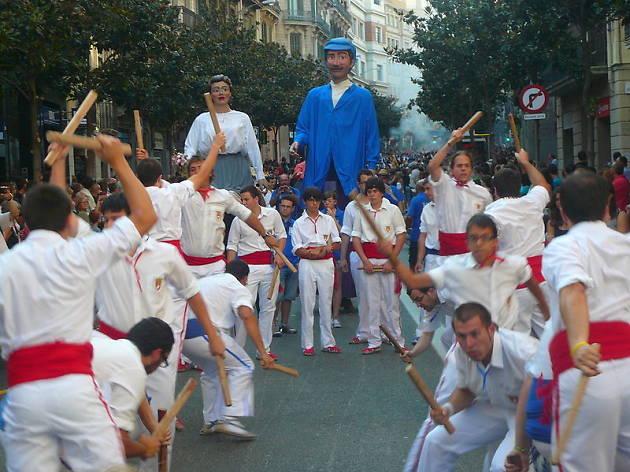 ©Pere López
Once the opening speech is made, the festival begins. Things get going at 11am in Plaça de la Vila with a parade. In the same square at 1pm there are activities under the banner of the Morning of the Festa Major, and later, at 6pm, another procession, the XVIII Cercavila de Cultura Popular, heads out on Gran de Grácia (near Santa Ágata) along with the festive courts from Sitges. 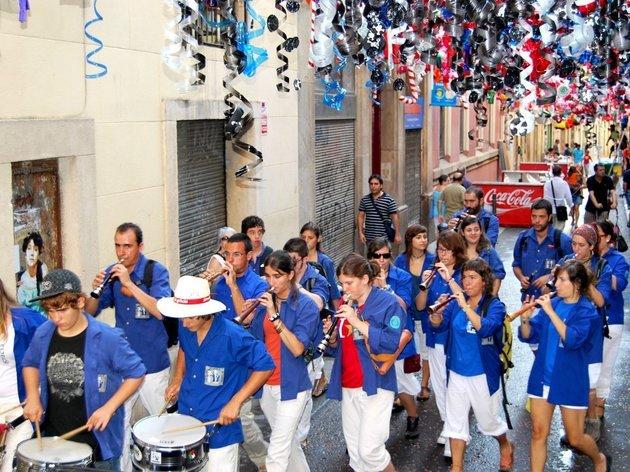 Gràcia wakes up at 10.30am with the Sant Roc parade, in the Plaça de la Vila. At 11am there's a Tribute to Sant Roc, in the chapel located on the corner of C/Llibertat and C/Fraternitat. At 12.30pm it's time for the 'castellers' (daring folks who build 'castells', or human towers) to celebrate with the Festa Castellera de Festa Major, in Plaça de la Vila, with castellers groups Xiquets de Reus, Castellers de Vilafranca, and the home favourite, Castellers de la Vila de Gràcia. 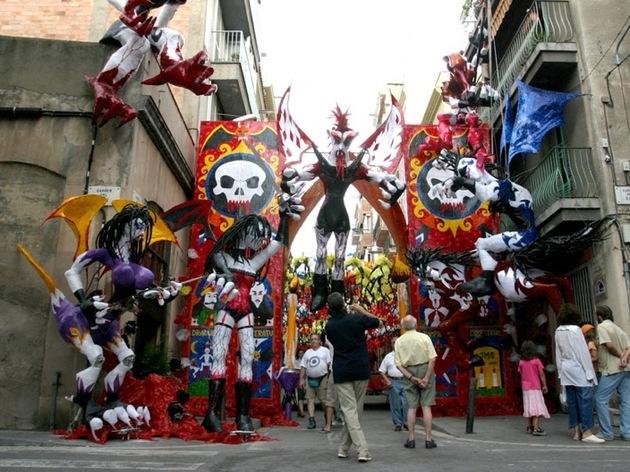 The big deal of the day today is the awarding of prizes in the best decoration contest, taking place in Plaça de la Vila. The dressing up of the streets and squares is the most important part of the Gràcia Festa Major, and a source of big-time pride for the winners – some of them work all year round to be in the running. In the past, C/Verdi, which is historically the favourite, has changed into the land of Amazons; C/Progrès has been bursting with dinosaurs; there's been Bollywood right in the Travessia de Sant Antoni... Which street will claim the coveted prize in 2015? 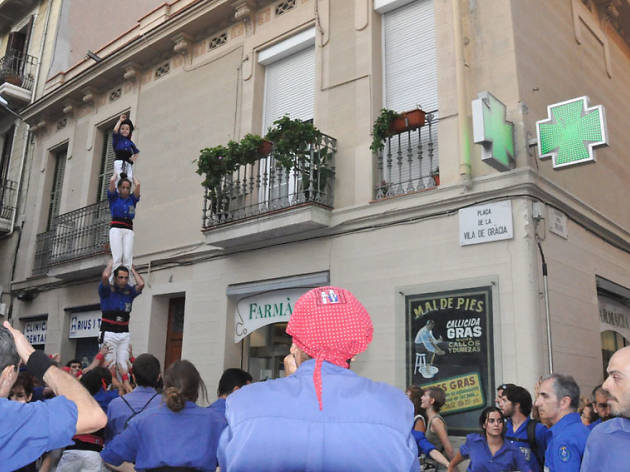 One of the most emblematic acts by the castellers starts at 8pm: the Baixada del Pilar Caminat from the Castellers de la Vila de Gràcia. What this means is that the human tower builders build said human tower of one column ('pilar') and walk down ('baxiada caminat') the street like that. They'll be going from Plaça del Sol to Plaça de la Vila. Once the column comes safely down, it marks the start of the Diada de Completes – that is, the building of more complex human towers – with your hosts the Castellers de la Vila de Gràcia. 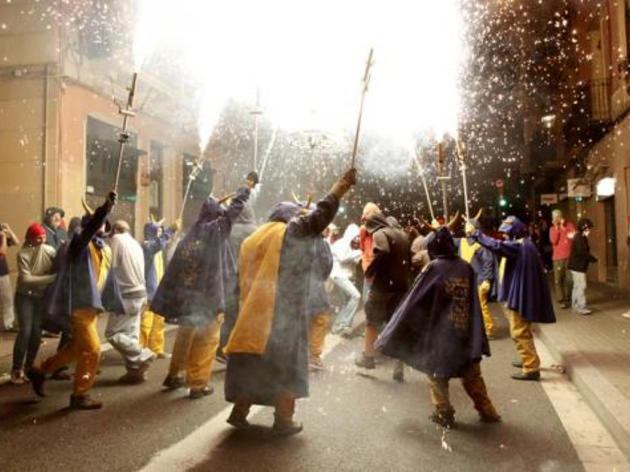 The festival comes to an end today, but first there's still the 'tabalada infernal infantil' (drum parade for kids) at 6pm in Plaça de la Vila, and the 'correfoc infantil' (fire run for kids), which starts at 6.30pm in Plaça del Diamante. At 8pm the adults take their turn with the bigger and louder tabalada infernal (8pm, Plaça de la Vila) and the more dangerous correfoc (9.30pm, leaving from Plaça Trilla). If you're not familiar with these fire runs, just be sure to not get too close, and wear something to cover your head, and perhaps not your best clothing. Sparks will fly.