The heart of Catalonia beats strongly and steadily

Monday 21 November 2016
FacebookTwitterPinterestEmailWhatsApp
Advertising
Now's your chance to discover, in the heart of Catalonia, places and things to do that are off the beaten path or not well-known in the region. Beyond the big capital cities, Vic, Manresa and Igualada, which are undoubtedly worth a visit when you have the time if you haven't already, the regions of Osona, Bages and Anoia are keeping dozens of charming secrets, little gems in the form of museums, and, in short, to plenty of memorable moments to take back with you.


Start your journey with a bit of sport, but with a little help from an electric bicycle. In Perafita, which is near Lluçà and within the subregion of Lluçanès, you'll find one of the Burricleta centers, where you can rent an electric bike and set off on one of the many paths in the area. The same company can help choose the route for you based on the level of difficulty you want to take on. You'll be grateful for the electric part of the bike when your legs grow weary, and the built-in GPS will keep you from losing your way. If it's your first time at the handlebars of an electric bike, you might want to stick with a simple circuit, like the one that goes from Puigmajor to the pretty village of Alpens. It's an easy route, but not a short one, so give yourself about two hours.

Once you're rested, head for Sant Boi de Lluçanès, which is quite close to where you already are. The church has some eight altarpieces with important artistic value, some Baroque and others Neoclassical. If you want you can book in advance with the priest (93 857 80 53), who will explain the altarpieces, which are truly magnificent, in detail, and show you the exhibitions of precious metals and ancient liturgical clothing in the same church.

It's a day for ups and downs. The central regions are vast with so much that's worth the effort to see and do. So get up early and head to the north of Osona, near Ripollès, to visit the Montesquiu castle, in the park of the same name. You'll be greeted by an audiovisual welcome message narrated by the ghosts of four people who were involved with the castle; after that you can visit the rooms of this fortified building, which dates back to the 13th century. Be sure to stroll around the park before or afterwards.

Not too distant as far as the timeline of construction goes and within the same region of Osona but heading east, to visit the monastery of Sant Pere de Casserres, a delightful Romanesque building located on a bend of the Ter river, which lends it even more elegance. The church, the charming cloister, the museum atmosphere of areas like the kitchen and the bedroom, or the surprise of coming across anthropomorphic tombs, are all worth the effort. And since it's nearby and if you have a little time, don't miss a stop in Rupit, via its frail bridge, and a wander through its medieval cobblestone streets.

Make your way to the town of Moiá, which is in the region of Bages, but is the capital of the 'natural region' of Moianès. There's a lot to take in here, too, but as you may be limited on time, what's the best way to spend a short time and see it all? For the last three decades, the company Vol Sherpa has been dedicated to the world of ultralight aviation, and has a school and a runway at the edge of Moiá. You can hire a plane to fly around the area for a half hour, and that of course also includes an experienced instructor to go with you. We'll leave you to come up with your own adjectives to describe the experience... Many say that the adjectives become even stronger when you go by helicopter.

And as you can practically taste the coming commemoration marking 300 years after the 1714 siege of Barcelona, take advantage of being in Moiá to visit the birthplace of Rafael Casanova, who was one of the highest-ranking political and military figures and remains an icon of Catalanism. The house/museum shows off antique furniture, and features a telling of the outbreak of the War of Succession, how it developed, and the role played by Casanova, who was wounded on 11 September, the last day of battle.

This is the land of farms and animals. But the livestock breeding you'll discover this morning is quite original, far from the traditional chickens or cows. Start out in Castellnou de Bages, near Serrat, where you'll find the ostrich farm Estruç Granja, with more than 200 specimens. There are also emus and other birds, but the ostriches definitely reign, and in fact are the base of the guided tour (make an appointment by calling 93 832 12 77 or 626 995 533). It lasts about two hours, and after meeting the flightless birds, you have the chance to delight in tasting them!

You might be a bit more accustomed to finding the star of the next tour on the table: the snail. In Castellfollit del Boix you'll find Cal Jep, a company that has dedicated many years to research and development in the field of the snail, and the production and marketing of snails. Book a tour in advance to see the farm, which includes maternity wards and incubation areas, and you'll learn more than you ever thought you would about this shelled creature that has the bad luck to be a delicacy to many palates.

Take advantage of the final hours of the excursion to stop by Anoia. In August you can even go to the Capellades Prehistoric Park for excavations, as the opening hours to the public are extended and admission is free. They don't do guided tours, though. What makes this park special is there are up to 20 archaeological sites from different periods, from the Middle Paleolithic to the Middle Ages. Those in the know say that the find of the most scientific significance is Abric Romaní, a shelter from the Paleolithic Neanderthal period. As rich as it is in archaeological sites, so it is in natural beauty, with the Cinglera del Capelló formation as the highlight.

Very near Capellades is La Pobla de Claramunt, which is crowned by its majestic castle. It's a great place to wind up your time in Central Catalonia. The various facelifts to the building, which dates from the 10th century, were done in the 1990s and helped make it one of the best castles in Catalonia for getting a feel for how these medieval fortresses really were. Taking in the magnificent views from the hilltop where the castle sits puts a nice finishing touch on the trip.

By public transport: Start the trip in the sub-region of Lluçanès. You can't get there by train, but the Sagalés coach company makes stops in Sant Feliu Sasserra, Prats de Lluçanès, Sant Agustí de Lluçanès and Alpens (902 13 00 14 / www.sagales.com).
By car: Take the C-17, heading toward Lluçanès via Vic, or the C-31 motorway, via Manresa, which will take you to local motorways of the sub-region. 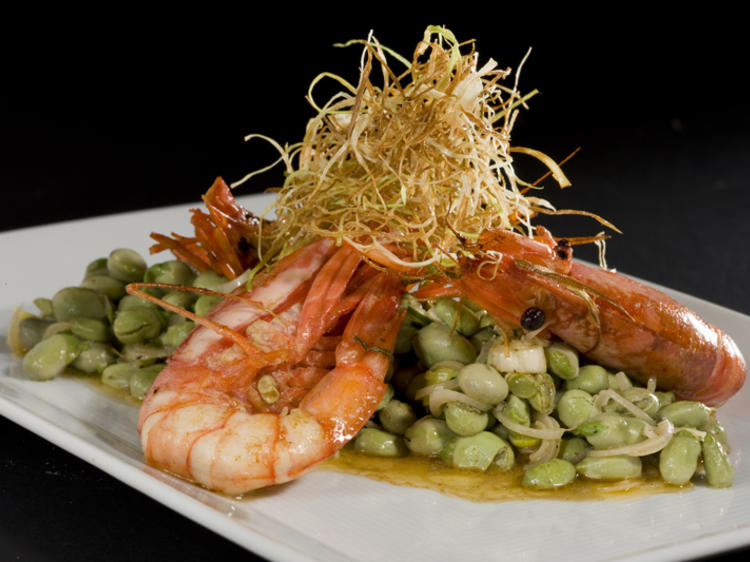 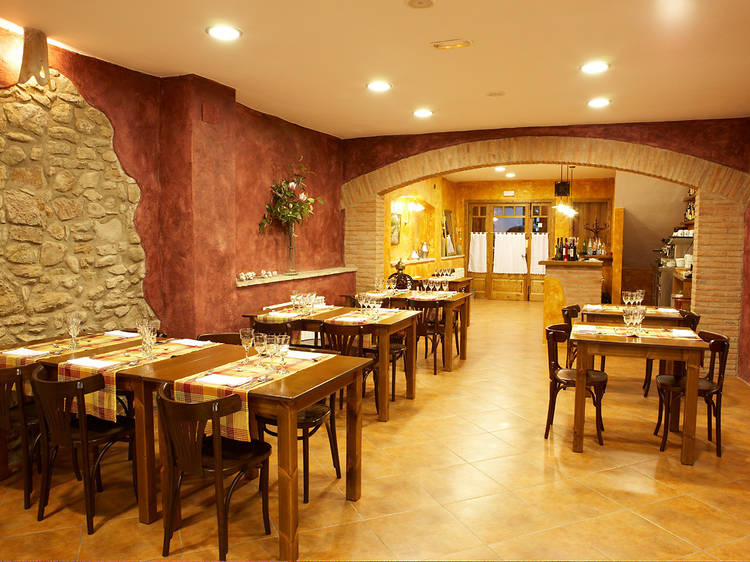 ‘A taste of Lluçanès served on a plate,’ their menu boasts. You’d better book a table in advance if you want to go to Cal Baumer because the family-owned business doesn’t always stick to set hours and, especially for dinner during the week, if there are no customers waiting, they might not open at all. Most products are from the region: beef, pork, sausages, Oristà chickpeas ...
C/ Sant Pere, 22, Prats de Lluçanès. 93 850 80 26 / www.calmusic.net.
Full set lunch weekdays: €12 (weekends €18.50 & €25). Menu: €30. Open daily with advance booking. 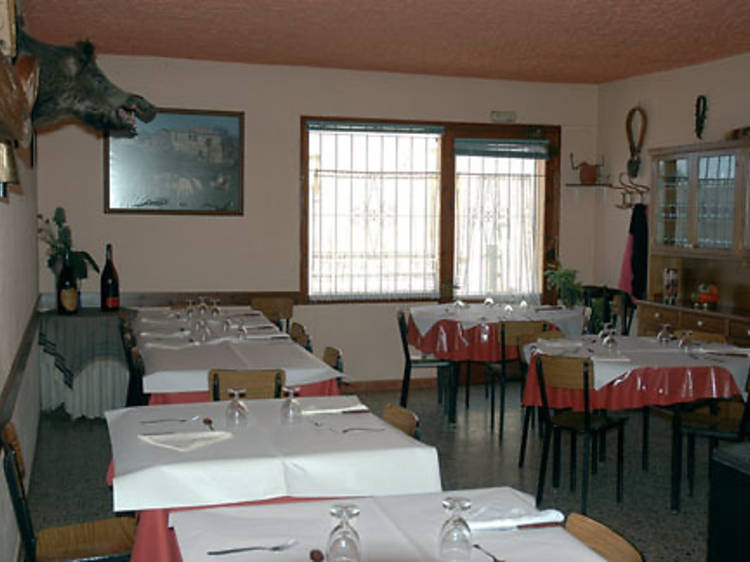 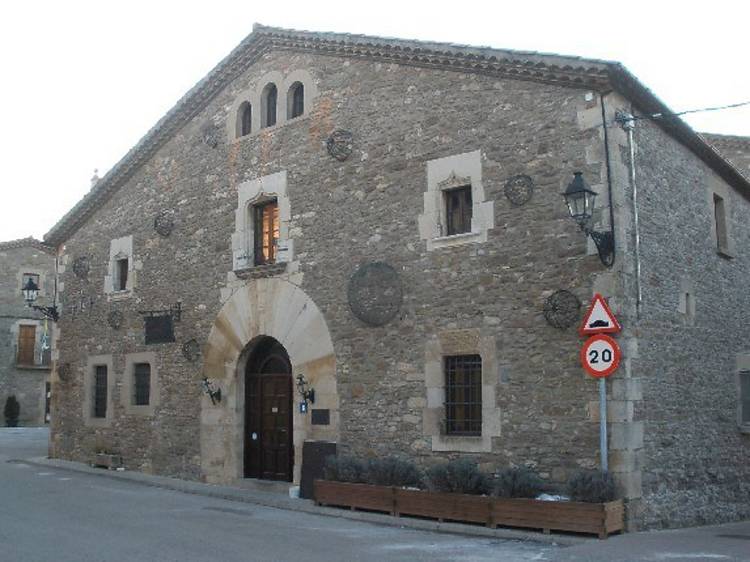 That you can taste olive oils from Catalonia’s five designations of origin (DO) when you arrive is already a point in this restaurant’s favour. The site is lovely as well – a Gothic-Renaissance mansion with a warm and well-preserved dining room. The menu explains that out of the guesthouse here, the village of Collsuspina was born. Today the kitchen serves seasonal dishes with local produce and a touch of daring and innovation.
C/ Major, 30, Collsuspina. 93 830 05 77 / www.canxarina.com.
Menu: €30-€50. Dinner served Thu-Sat, lunch served Tue-Sun. 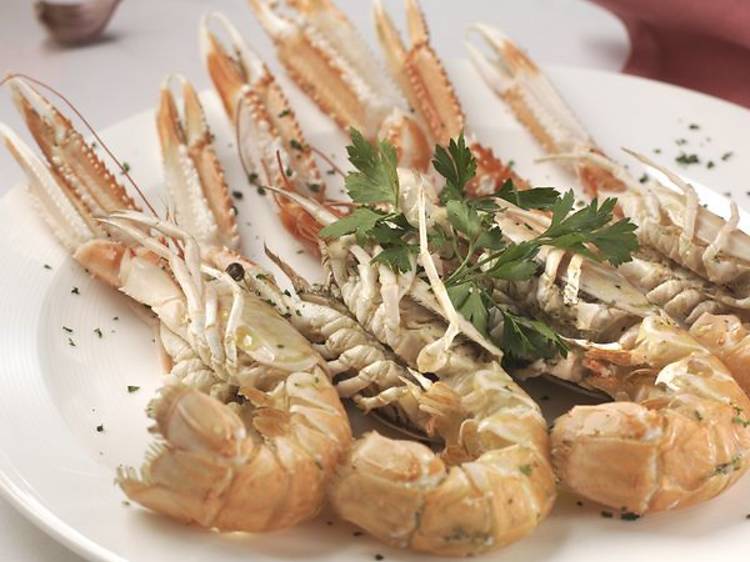 A great place to sample rice-based soups and crunchy prawns in the interior of Catalonia. The DO Girona steak also plays a starring role. The space itself is not that big, so it’s a good idea to book a table in advance.
Plaça Colom, 10, Moià. 93 830 05 56 / www.elcolom.com.
Full set lunch: €12 (weekends and holidays: €25). Carta: 30€. Dinner served Thu-Sat, lunch served Tue-Sun. 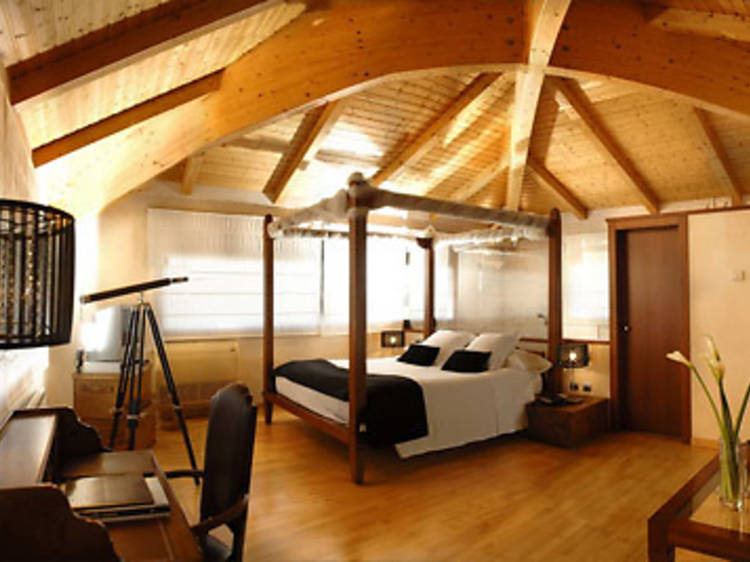 It’s a four-star establishment with a friendly vibe, and working in their kitchen is the prestigious chef Nando Jubany. So you get all the comforts of a good hotel (spa included), proximity and good food.
Manresa motorway to Vic (N-141c), km 20. 93 830 91 53 / www.hotelurbisol.com. From €230 for two people, half board. 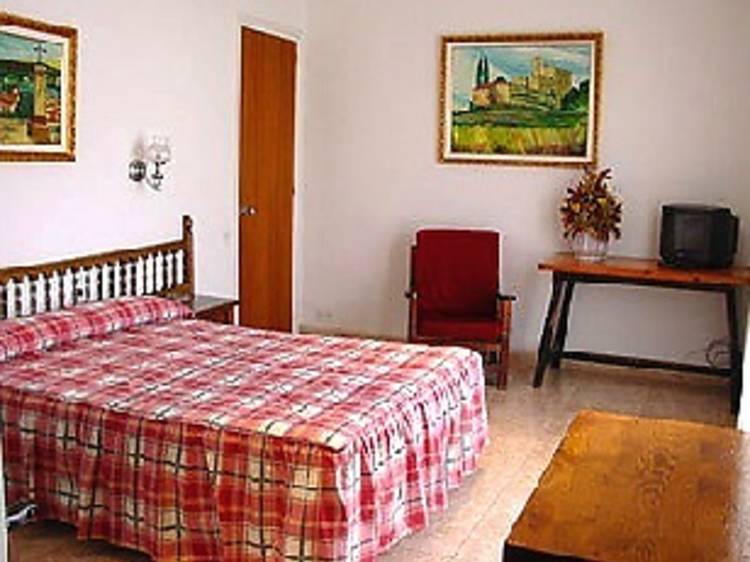 This is one of those hostels that is a landmark of its town, in this case, in Santa Maria d’Oló. The locals go to the hostel’s café to have breakfast or a drink and a chat as visitors come and go with their luggage in and out of the 17 simple but decent rooms.
Avinguda de Manel López, 6-8, Santa Maria d’Oló. 93 838 50 01 /www.hostalsantamaria.com.
€35 per person, breakfast included. 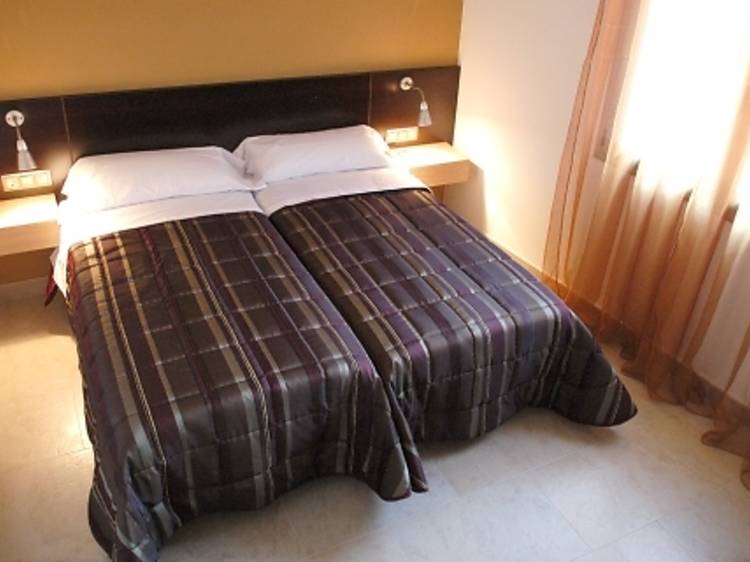 This is a very functional place, geared toward people who are from out of town and it’s a bit different from what you might normally find in the area. Hotelet gives you a room to sleep in, with the basics, and not much else. Double room €45.
C/ Sant Jordi, 2, Prats de Lluçanès. 93 856 03 23 / www.hotelet.cat. 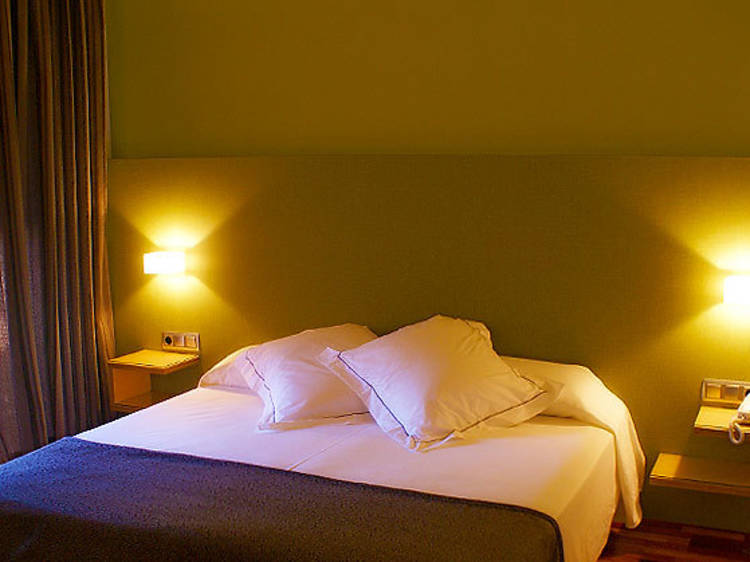 In La Pobla de Claramunt you’ll find this family hotel with a long history and tradition, situated in a great place for taking day trips, right at the foot of the castle. They have a good outdoor swimming pool, very decent rooms and a restaurant that cooks up home-made food.
Avinguda de Catalunya, 1, La Pobla de Claramunt. 93 808 60 00 / www.hotel-robert.com.
Double room from €70. 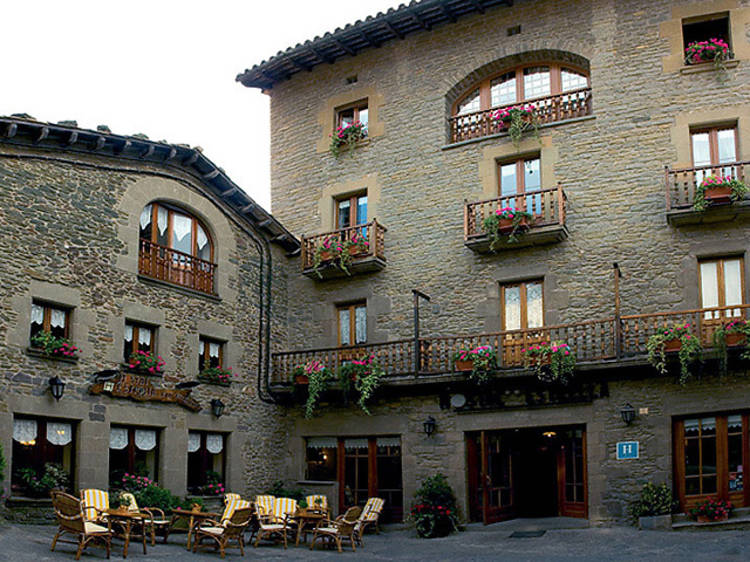 For those looking for a touch of romance, elegance and quiet. Spend your down time relaxing in the charming village of Rupit with all the amenities you might need. Double room €110.
Plaça del Bisbe Font, 1, Rupit. 93 852 20 05 / www.hostalestrella.com.