A land of impressive castles and charming villages

Monday 21 November 2016
FacebookTwitterPinterestEmailWhatsApp
Advertising
Why not spend a couple of days in Ponent? The locals say there say, and probably rightly, they're from a place that's largely forgotten. If you're looking for the beach or the mountains, the Ponent region is neither one nor the other, but rather something else altogether. But this also has its appeal, of course. So what will you find? Charming villages, full of history, castles and fortifications like nowhere else in the country, great hushed plains and plenty to do. To make the most of this trip without spending more time behind the wheel than you spend actually seeing and enjoying the place, we'll concentrate on three neighbouring regions: Segarra, Urgell and Garrigues.


The summer sun in the early afternoon can be quite unforgiving. As the mercury rises, it's a good idea to find something on indoors (and if there's air conditioning, even better). In the Segarra capital of Cervera, it's time for a visit to the Museo Comarcal. The centre is divided into several parts, but the first floor is especially alluring, featuring the Casa Museo Duran Sanpere, an example of a virtually intact 19th-century inland Catalan bourgeoisie house, with original furniture used by those who lived in the building. Among its multi-roomed 600 square metres, there's even a conserved French neo-Gothic chapel.

After the museum, head about 20 kilometres north of the capital, to the town of Ivorra. Organise a time to enter the Sant Dubte sanctuary, which celebrated its millennium in 2010. You will not want to miss the 15th-century Romanesque figure of Santa María de Ivorra and the altarpiece where it stands. Other must-sees include the Gothic reliquary of Sant Duda, a good example of work with precious metals, and the contemporary sculpture of Christ, which stands more than 2 metres in height.

If you have the time and energy, just next to Ivorra is Vicfred, a village with a slightly higher elevation where you can get great views, and which also has a castle that was built as a defensive structure but now has a more stately appearance. If you want to stop in, you'll have to book in advance. Guissona boasts one of the largest and most important meat facilities in Southern Europe. Since they do tours - and free tours at that - it's a good place for carnivores to check out, but you should book in advance. Despite the enormity of the place, the tour isn't rough-going because it's all done from the comfort of an electric train. Get to know the truth behind the mysteries of how sausages are made and ham is cured.

After about two hours on the train, you might want to stretch your legs, and get back outdoors. The good folks at the Segarra Excursion Centre can give you info on all kinds of hiking routes in the area, according to the time you want to spend and the level of difficulty you choose. The same centre organises plenty of outings throughout the year, so check and see if they have something on while you're around that will suit you if you want to book a spot. If you prefer to go it alone, there are also several marked footpaths. For example, we can recommend one in the Llobregós Valley called Molino de Cava. To find the beginning of the route, take the road that goes from Guissona to Biosca. It's a circular route that leads to the Llobregós river, several farmhouses, cottages, the remains of a water mill, and also a giant poplar tree. Time for a change of region, so head to the south of Urgell. You'll want to visit the Vallbona de les Monges Cistercian monastery, which has longer opening hours in August than in the rest of the year. Of the three monasteries that make up the Ruta del Císter, as it is known (the other two are Poblet and Santes Creus), that of Vallbona de les Monges has got to be the least known. Which is exactly the reason to go. Founded in the 12th century, the monastery is home to a community of nuns who follow the Rule of St. Benedict, make ​​pottery and cultivate the garden. Architecturally, there is plenty to take in, but one of the highlights is the stunning octagonal lantern/bell tower. Among its treasures inside, feast your eyes on the sarcophagus where Queen Violante of Hungary, wife of James I the Conqueror, was buried.

Devote what remains of the afternoon to wandering around the streets of Guimerà, which isn't far from Vallbona, where you'll find a blend of great history and art. The village is crowned by the remains of the castle and the church of Santa María, but perhaps what attracts visitors more is the fully medieval structure that still stands, the overcrowding with houses, the arches on the streets ... . In mid-August they put on a Medieval Market. Start the early hours of the last day at full speed. Juneda, part of the Garrigues region, is home to Zona Karting, with a circuit of 1,000 metres of asphalt. You can take the karts for a spin or prove your stuff in a race. There's also a dirt track for Supermoto practice.

And now for something completely different. Since you're already in Juneda, why not arrange a time to check out their museum? It tells the story of the people, but probably the most enticing part is 'Colores de Tierra', a very well-crafted exhibition on the results of the archaeological digs that took place in the nearby village of Minferri, inhabited 4,000 years ago by farmers and ranchers. Thanks to the work of those archaeologists, we know today how these ancestors of ours lived, as well as their funeral rites. The afternoon brings more history, although much more recent, and rather than visit another museum, this time you'll head for the Espluga Calba castle. Sure, this is the land of castles and there are many to see, and while this one isn't in the greatest condition of those to choose from, it has its own charm, and above all, its own history. It was built between the 11th and 12th centuries, and highlights include the chapel, the stairway to the first floor, and the room of the Order of Malta. This Order, founded in 1084, still meets today, and locked in Espluga Calba as the new capital of the ancient Priory of Catalonia. The rooms surround the courtyard, which boasts a stone basin where oil was once stored.

That's Garrigues: the quintessential source of this liquid gold. So what better place to bring the trip to a close than Albi, one of the co-operatives that produce oil. One of the 'cathedrals' you can visit was designed by Cèsar Martinell and built in 1919, the same year the Agrícola de Albi co-op was born. In the co-op they press extra virgin olive oil, which you can taste at the beginning or at the end of the tour of the modernist building. By train: Start in Cervera, where there is a Renfe train station (902 240 202 / www.renfe.es).
By bus: Alsina-Graells has regular service to and from Barcelona, ​​Lleida and other regional capitals (902 422 242 / www.alsa.es). Eixbus joins Cervera and Girona (97 220 48 68 / www.teisa-bus.com).
By car: You can get to Cervera via the Barcelona-Lleida and the C-25 Lleida-Girona motorways. 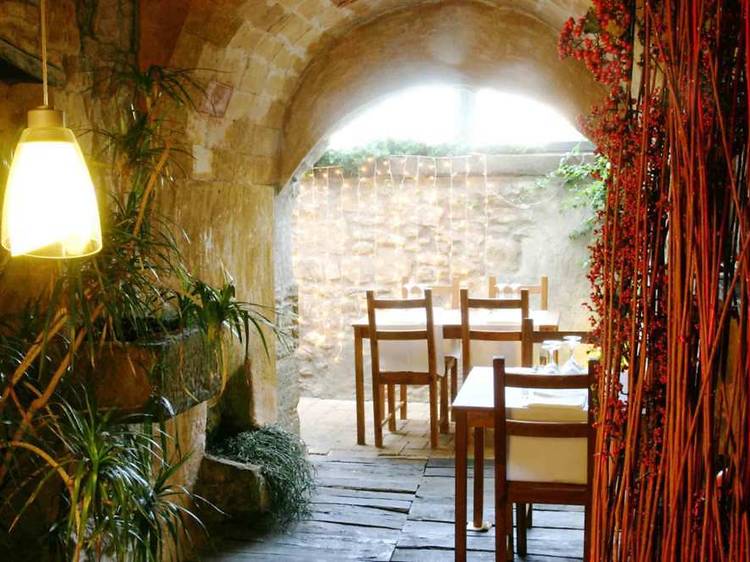 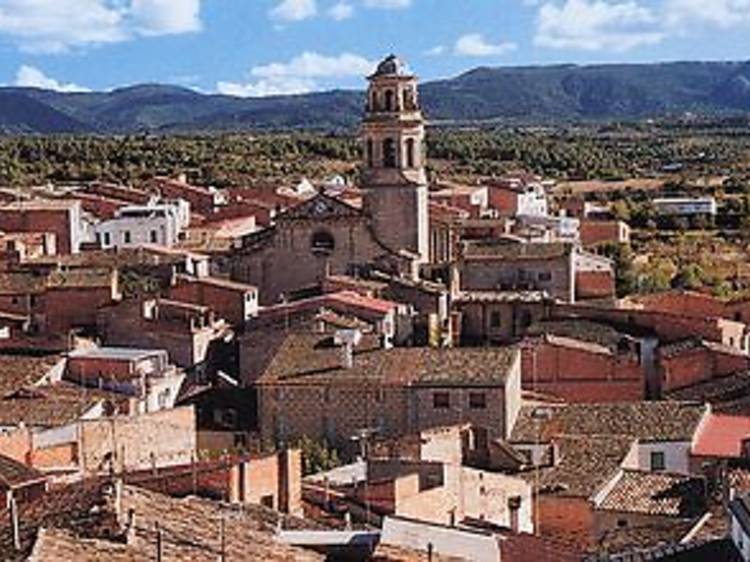 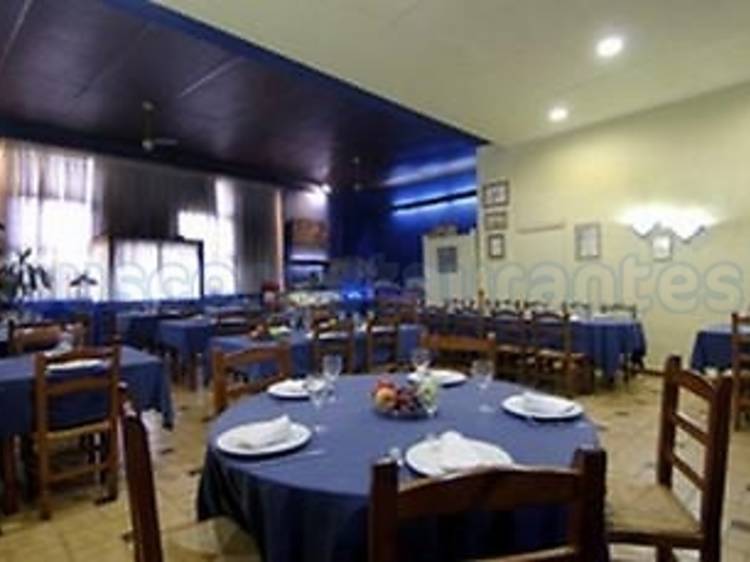 There are three decades of history behind this family restaurant that’s constantly renewing itself. The recipes are fresh, but so are the ingredients, and they focus on plant-based foods, especially oils.
Menu: €35. Open daily.
C/ Raval de Lleida, 40, Les Borges Blanques. 97 314 21 40. 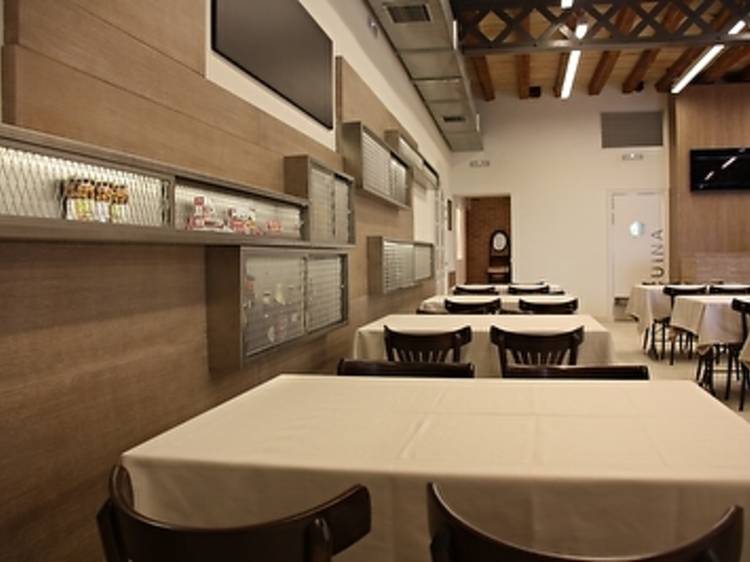 This family hostel is near the San Ramón sanctuary. The restaurant uses fresh market ingredients and everything is made on the premises. The canalones and the veal round are the house specialities. Recently they’ve done some work to freshen up their look as well.
Full set lunch daily €11. Open for lunch daily except Wednesday.
C/ Mayor, 36, San Ramón. 97 352 40 04 / www.lafondamagdalena.cat. 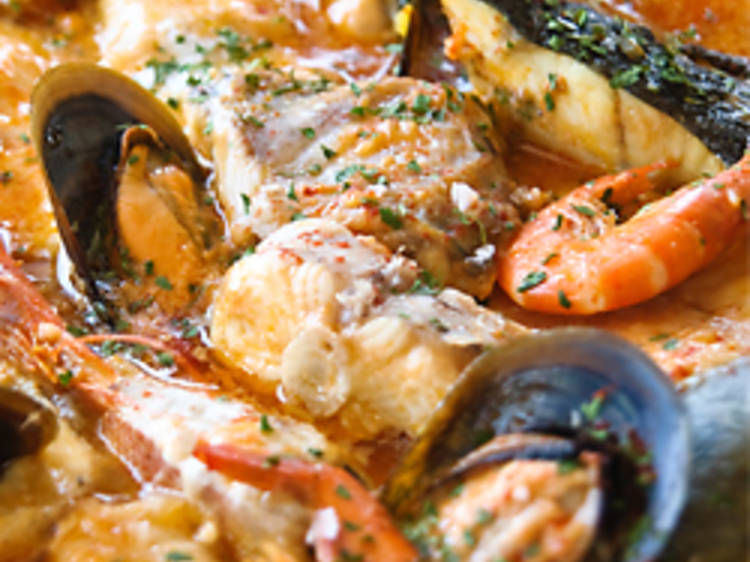 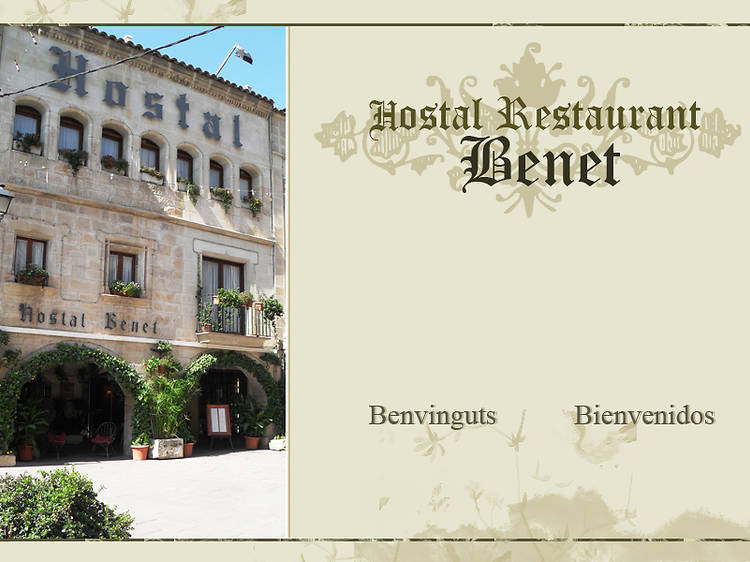 Smack in the arcaded square of the Garrigues capital, this old building is fully restored with 900 square metres of accommodation including a cosy dining area and comfortable rooms with bathroom, TV, heating, air conditioning, WiFi...
Double room from €30 per person.
Pl. Constitución, 21-23, Les Borges Blanques. 97 314 23 18 / www.hostalbenet.cat. 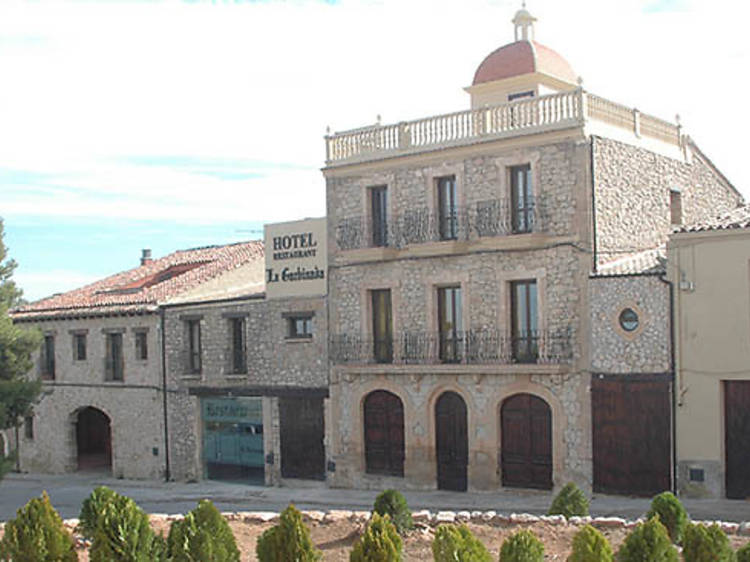 With country charm and elegant rooms that are all different, this hotel located in a peaceful village is made up of two buildings separated by a few metres: one has more of a rustic feel and the other is like a small 19th-century palace.
From €60 for two people, breakfast included.
C/ Mayor, 9, Granyena de les Garrigues. 97 313 62 75 / www.garbinada.com. 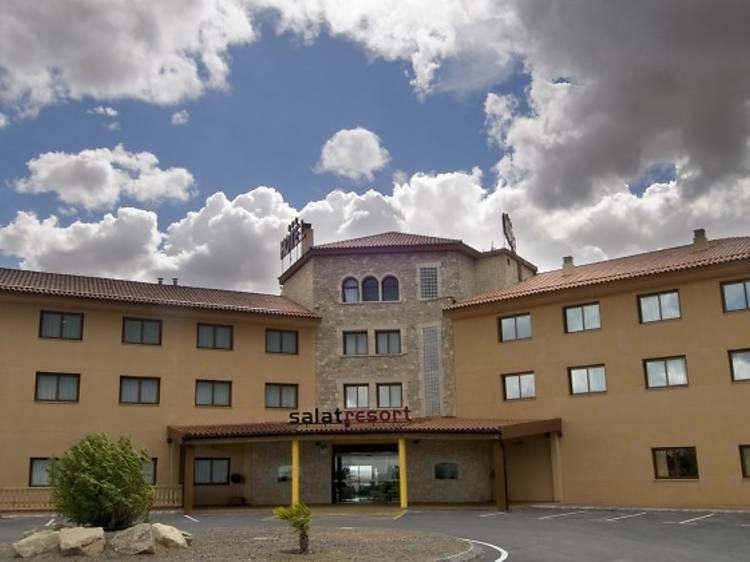 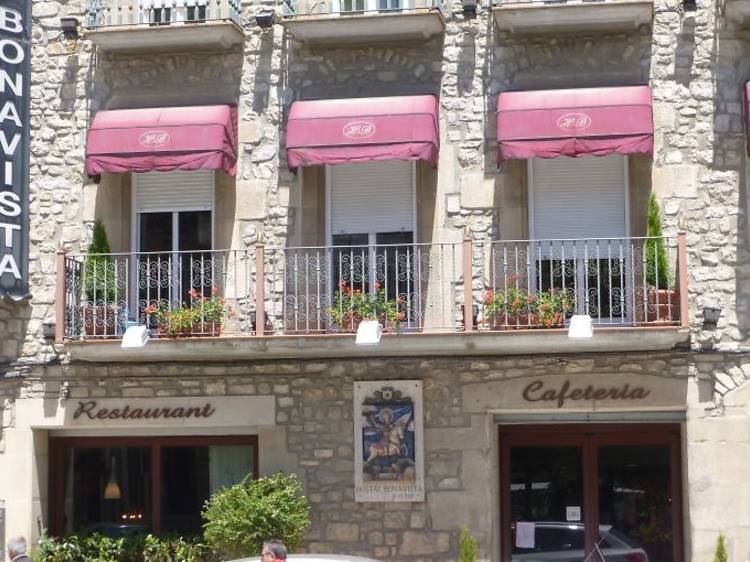 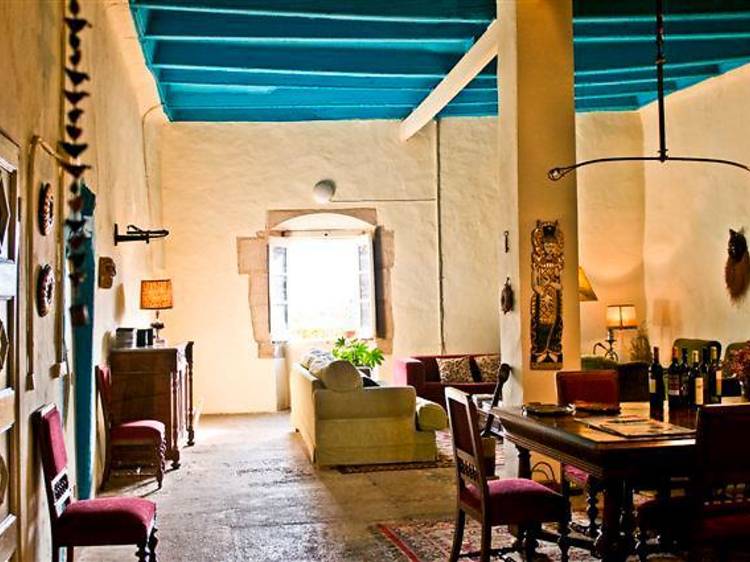 This three-bedroom hostel is set in an old Renaissance house. They have four horses and offer riding clases.
From €40 per person, breakfast included.
C/ Gracia, 4, L'Ametlla de Segarra. 696 128 577 / www.calperello.net.