A world full of activity and corners to discover

Monday 21 November 2016
FacebookTwitterPinterestEmailWhatsApp
Advertising
'Com el Vallès no hi ha res.' The truth is that Vallés, both Western and Eastern, has changed a lot since the poet Joan Oliver (Pere Quart) wrote this verse, which translates, less poetically, as 'There's nothing like Valles'. Industrialisation and immigration have dramatically grown the cities, and roads and motorways have multiplied. But the inland plain, and especially the many mountains that surround the region (Natural Park of Sant Llorenç del Munt and Serra de l'Obac, Collserola, Montseny, Montnegre ...), still have intact and intimate places, spaces worth visiting, and a wide range of leisure options. But leisure time can also be full of activity, which you'll see from our list of recommendations to follow. The first activity involves the world of horses and the mountains separating the Barcelona province from Western Vallès: Collserola. One of the cities that lies in the face of this mountainous area is Sant Cugat, which is where to start off. Several companies organise horse-riding excursions through the trees of the mountains from here. It's best to book a spot, and one such place, with three decades of experience, is Hípica Sant Cugat-La Pelleria. Once you're matched with a horse, you're ready to discover some secrets of Collserola. If horseback is not a natural state for you or maybe you've just got more on your slate for the day, you could choose a one-hour route, but you can ride for longer as well.

Once the horses are back in the centre, take a drive to Cerdanyola del Vallès. Its art museum opened a few years ago, after a major refurbishment of the Can Doménec modernist building. And many of the pieces inside are modernist as well, and the artists represented were connected in one way or another with the people and the region. The 'Damas de Cerdanyola' ('Women of Cerdanyola') stained-glass windows shine. Though it's not clear who made them, experts in the field consider them a high point in Catalan modernist stained glass. The centre is intended not only as a museum exhibition, but also as a space of research and information, and they host many cultural activities throughout the year. Natupark, considered the largest of its kind in Spain, occupies 6 hectares, with 118 games and 8 circuits among Aleppo and pinyon pine trees in the enclosure called Bosc Tancat ('Enclosed Forest'), in Cerdanyola del Vallés. So now you're here, it's time to jump in to some fun. You might want to look before you leap because some of the activities are carried out at some 14 metres high. But not to worry, as the place has fantastic safety systems in place, and for the kids there are rope bridges barely one metre off the ground. Zip lines, vines, a network of logs or spinning logs are just some of the ways you can put yourself to the test.

And no matter what difficulty level you choose, once you've had your fill of swinging in the trees, you'll want to splash around in the pools right beside Natupark. Bosc Tancat has four pools, of different shapes and depths, with plenty of room for sunbathing, or if you prefer, you can relax in the shade under the pines. The morning brought high adventure, so what's left for the afternoon? Plenty! Head to the town of Ullastrell, near Terrassa, where there's a heliport. From there you can take a helicopter to your chosen destination. The company that organises these flights for tourists is Barcelona Helicòpters, and, although they have a number of preset tours (like going to Montserrat or to Barcelona), you can also take tailor-made journey. Of course, the longer the time in the air, the bigger the hole in your pocket, and be warned that helicopter flights are not exactly the most economical entertainment option. But if you can afford it (or have a rich relative who likes to give expensive gifts), you'll have the experience of a lifetime.

To cap off the day, head to Terrassa, the co-capital of Western Vallès, where you do not want to miss Seu d'Ègara, a real gem. After years of work, the three churches have a wonderful look and offer the public an architectural history lesson, as there are elements of mostly Romanesque, but also of the Visigoth period (of the few in Catalonia), the Renaissance, Baroque, and even of the late Roman Empire in Catalonia, not forgetting the two Gothic altarpieces. It's no wonder there's a growing movement to have the monument declared a World Heritage Site. You can request a guided tour so no detail escapes you. Relocated to the neighbouring region of Eastern Vallès, you can spend the morning near Sant Feliu de Codines. First stop, the magical environs of Sant Miquel del Fai. Skirting the cliffs of Bertí, head toward the various caves and feast your eyes on the spectacular waterfalls, which should be quite generous this August after the late snows and rains of spring and early summer. The monastery is sure to provoke oohs and ahhs with its chapel built into a mountain cave, and the open panoramic view laid out before it is also worth the trip, which itself isn't that long but it's full of natural beauty.

Next stop: Cim d'Àguiles. It's best to go here later in the morning because the space doesn't open until noon, and the flight observation sessions, which are a must, start at 1pm. Beforehand, you can take a tour of the aviaries, where you can get up-close with vultures, hawks, eagles and owls, owls, owls ... and you'll learn each one's individual features and peculiarities. But the flight sessions are the highlight for any visitor. Sitting in an amphitheatre, you'll watch the elegant and majestic flight of various birds of prey, which always end up coming home. It's always fascinating when you get the chance to visit houses where historical figures were born, lived or died. Not far from where we were in the morning there's an interesting house-museum, Enric Prat de la Riba. It's in Castellterçol, and, even if you don't know much about the namesake, the building itself is worth a look, along with its well-kept antique furniture. Prat de la Riba, politician and first president of the Commonwealth of Catalonia, was born and died within these walls.

After having ridden a horse, crossed forests jumping from tree to tree, visited museums and churches, and even gone on a helicopter ride, some relaxation is in order. Since Caldes de Montbui and La Garriga are both nearby, you can choose one of their packages they offer in their spas and spend what's left of the afternoon in wonderful waters until it's time to leave refreshed and ready for the journey home. By train: There are plenty of Ferrocarrils de la Generalitat (FGC) train stations in Sant Cugat that run frequently to and from Barcelona (93 205 15 15 / www.fgc.net).
By bus: Bus line A4 joins the Catalan capital to Sant Cugat (www.sarfa.com).
By car: The AP-7, the C58, the C16 and the Rabassada motorways will get you to Sant Cugat to start your itinerary. 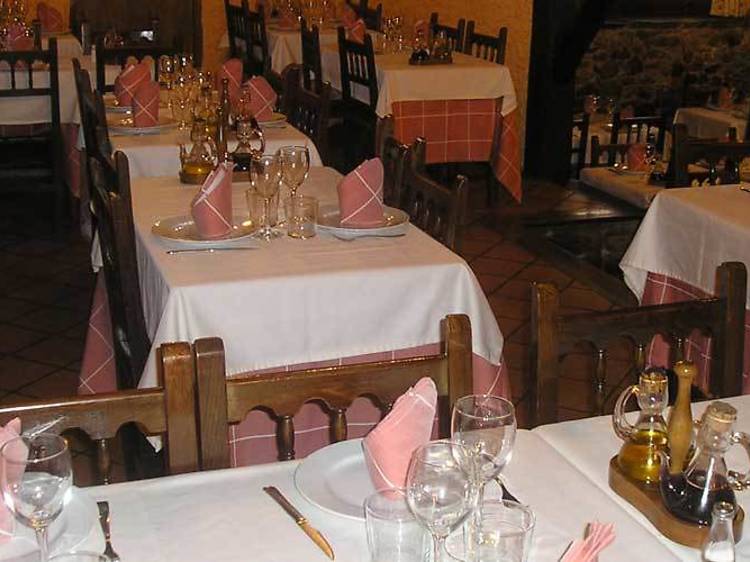 Summer is a great time to go to Can Rectoret with the terrace open and the sea nearby. The interior is also very nice – a 16th-century farmhouse, and a family that’s been cooking together since 1920! If all this is just icing to you and what you really want to know is what they put on the table, you won’t be disappointed with their selections of grilled meats, roasts, sausages and cheeses, snails, and when they’re in season, wild mushrooms and the leek-like Catalan calçots.
Full set lunch daily: €18. Menu: €35.
Closed Sunday night and all day Monday.
Carretera B140, Km 4, Santa Perpètua de Mogoda. 93 574 18 47 / www.canrectoret.com. 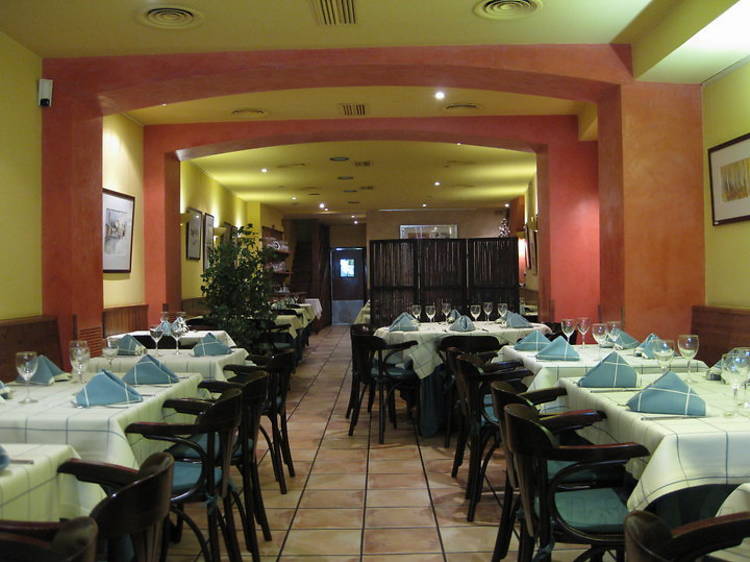 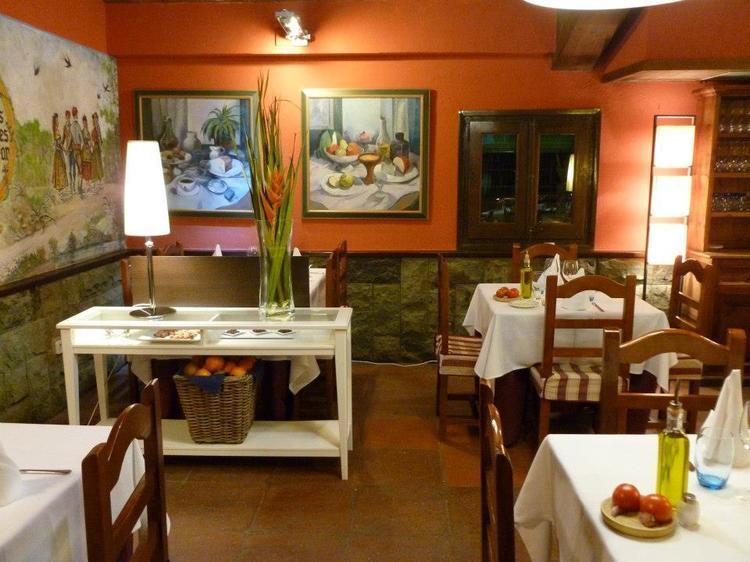 Its spacious rooms and gardens make La Bóta ideal for families and big celebrations, but you can also enjoy a romantic meal, since this farmhouse offers charm to go with its quality cuisine and remarkable wine list.
Menu: €30.
Open for lunch Tue-Sun and for dinner Fri and Sat.
Carretera de Palau de Plegamans to Caldes de Montbui, Urbanització Can Valls, Caldes de Montbui. 93 865 07 57 / www.labotadecaldes.es. 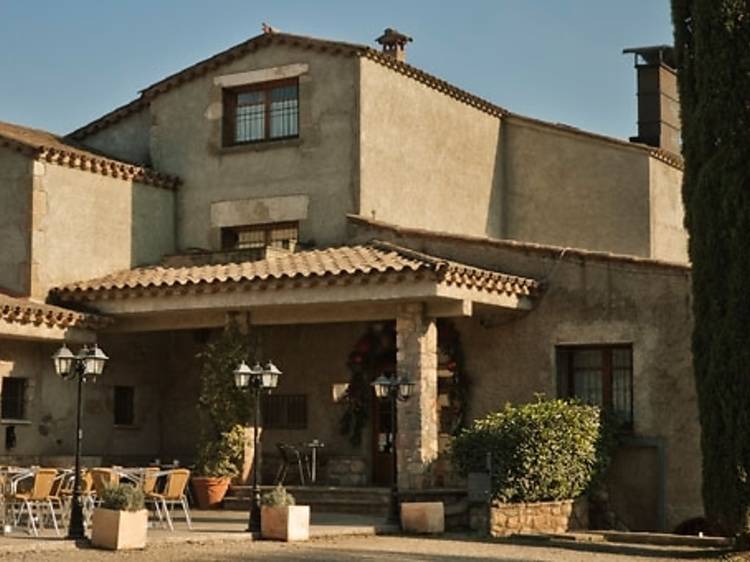 One of the strengths of Can Burguès is its flexibility when it comes to customized menus for groups. The cuisine is home-made and traditional, made with quality local products.
Various set menus from €24. Menu: €30.
Closed Monday night and all day Tuesday.
Carretera de Sabadell to Granollers, Km 6.7, Palau-solità i Plegamans. 93 864 40 85 / www.restaurantcanburgues.com. 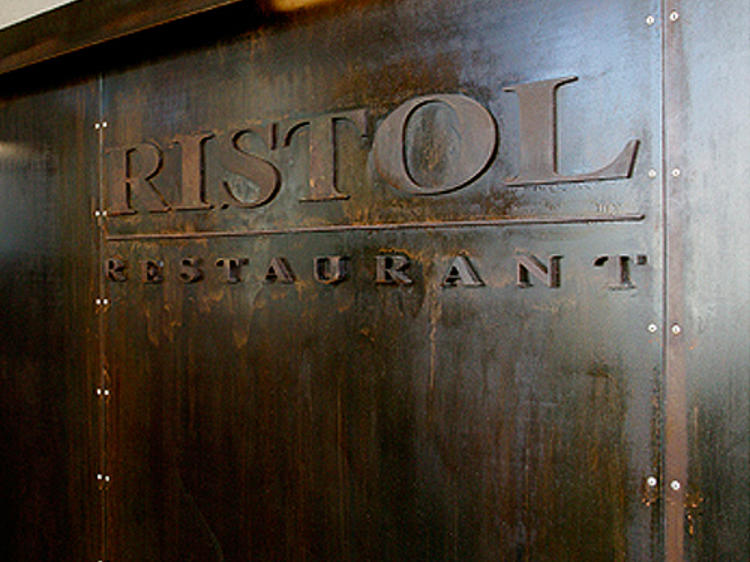 Modernity and tradition come together in this Viladecavalls restaurant. There are plenty of set menus to choose from, and for all kinds of budgets. Try the egg coulant potatoes and Iberian ham, or the grilled 'pallardina' with truffle purée.
Set menus from €16. Menu: €40.
Closed Sunday and Monday night, and all day Tuesday.
C/ Antoni Soler Hospital, 1. 93 788 29 98 / www.ristol.com. 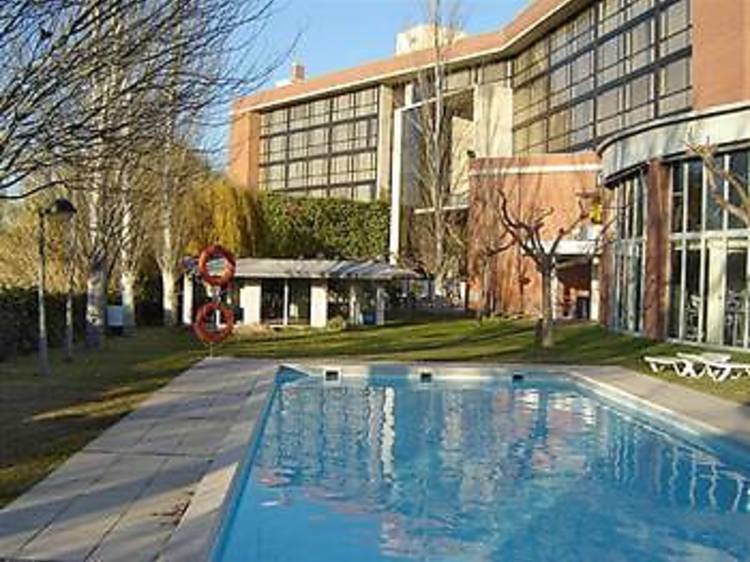 This hotel in the capital of Eastern Vallès is in a great spot at one of the entrances to the city, so you can be on the road in a tick and no matter which direction you take, there plenty of points of interest nearby. The hotel has recently been refurbished, and their swimming pools are just the thing in the warmer months.
From €50 per person.
C/ Turó d’en Bruguet, 2, Granollers. 93 879 62 20 / www.ciutathotels.com. 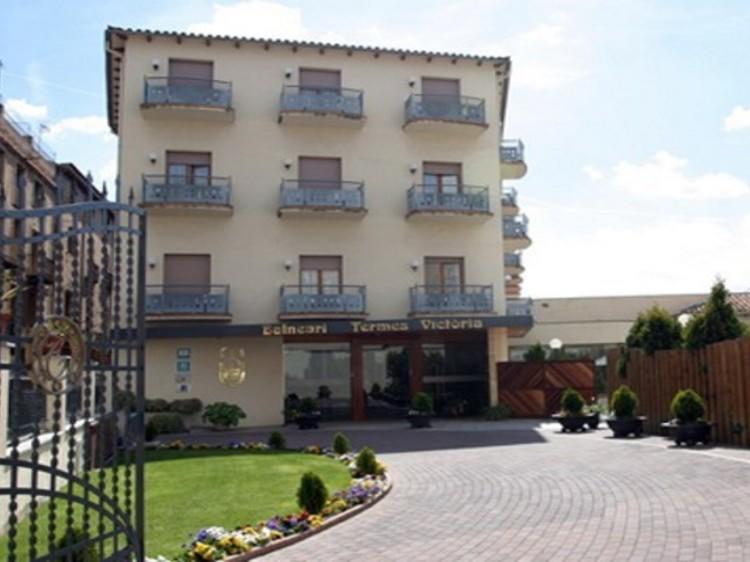 If you want to do fewer than the many activities suggested and you have time to stay a few hours at the hotel using their facilities, this is the place for you. And what better way to relax than surrounded by the hotel’s history and pampering spa treatments.
Double room from €129.
C/ Barcelona, 12, Caldes de Montbui. 93 865 01 50 / www.termesvictoria.com. 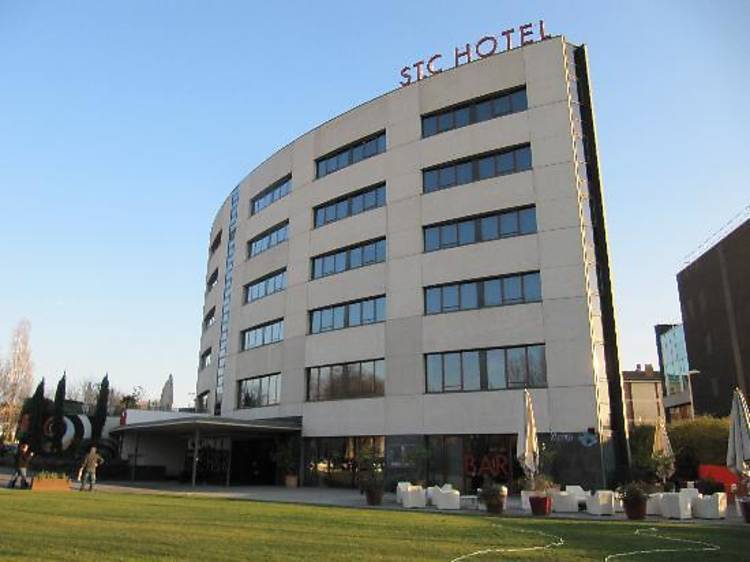 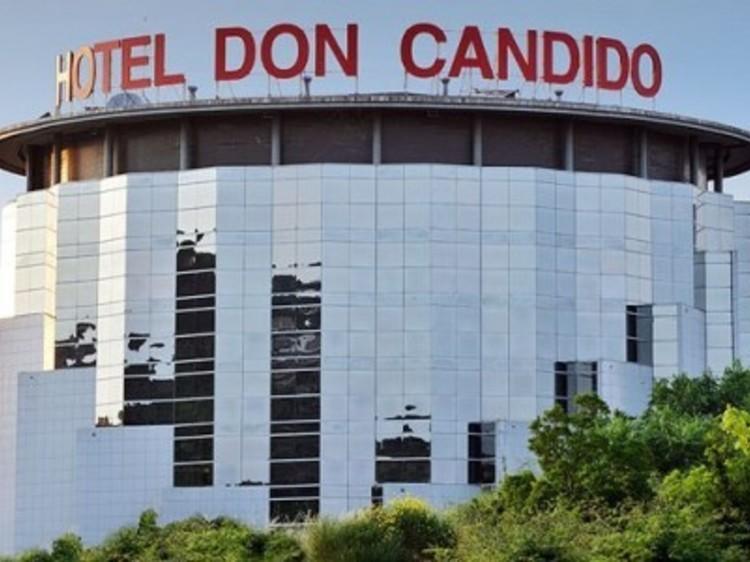 If you’ve ever passed through Terrassa, you’ve probably noticed this striking circular hotel on your way in or out of town. Beyond the pleasing aesthetics, it’s a four-star hotel with 110 rooms and all the amenities such as a spa and their Mun restaurant and its menu of creative cuisine.
Double room from €60.
Rambleta Pare Alegre, 98, Terrassa. 93 733 33 00 / www.hoteldoncandido.com. 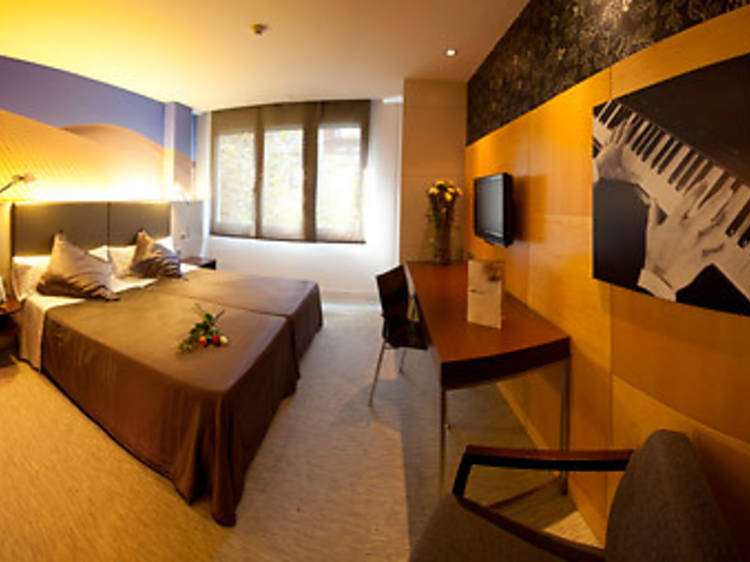 Located in the commercial area of Sabadell, this spot is ideal if you want shops close at hand and to take in the city, the co-capital of Wesern Vallès. Refurbished in recent years, the hotel has some 140 spacious rooms and a good restaurant.
Double room from €50
Av. 11 de Setembre, 40, Sabadell. 93 724 40 00 / www.hotelurpi.com. .