Moianès, despite being quite a small region and with only ten towns and villages, is full of points of interest of very different kinds. You’ll discover them when you do this getaway, which is basically focused on two places: L’Estany and Moià, the capital. 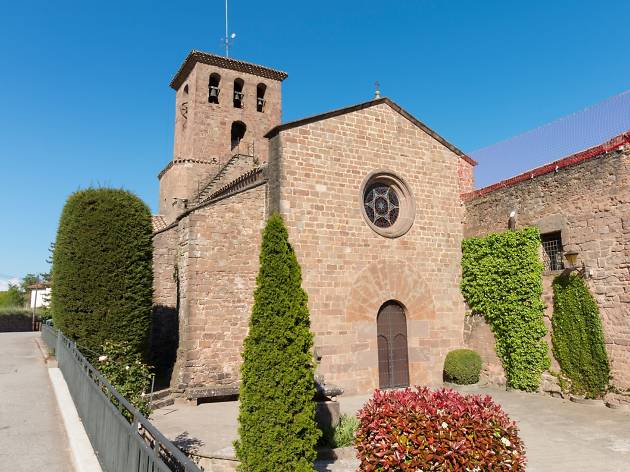 Spend the first day in L’Estany. And as there’s a visitor centre, and you’re visiting, pop in! It’s in part of the old premises of the Monastery of Santa Maria de l'Estany, and provides information about the town’s tourist and cultural resources and services. Similarly, it also aims to promote its archaeological, historical, architectural, artistic and ethnological heritage.

First you’ll visit the monastery of the Augustinian order that teemed with life between the 11th and 15th centuries and today is a parish church. It’s a real jewel of Romanesque art, especially the capitals in the cloister, 72 in total, with carved biblical scenes and vegetal and heraldic themed iconographies. It was founded in 1080, and has a notable gothic sculpture of the Mother of God made from a single block of alabaster.

For lunch, try Ca la Tona, near the monastery, where you can enjoy organic and local products.

In the afternoon, stay in L’Estany. Don’t you think it’s strange that the town has this name, which means lake, and yet there’s no sign of a lake? It did have one but it was dried up by a spectacular engineering project dating to the 18th century and that still performs the same function: removing water from the plain. The landscape was probably more beautiful when there was water on the surface but this caused diseases, and the monks in the Augustinian monastery needed land for crops. The solution was to build a dry-stone mine of nearly half a kilometre, which you can now visit, bringing the day to an end. The second and final day of the getaway will be in Moià. You’ll start by discovering its centre, beginning at Plaça de Sant Sebastià, its patron saint. Some wall tiles have songs and tributes to trees, such as the Hymn to the Fruit Tree, by Joan Maragall. Go down Carrer del Forn, with its old emblematic houses, one of which is Can Carner, home to the Consorci del Moianès i Hotel d’Entitats, and another, number 25, which was the first Pious School in Catalonia, opened in 1683. When you get to Plaça Major, look all around you: the 13th century arches, the Church of Santa Maria, from the 17th to 18th centuries, the sgraffiti on the façade of the vicarage, or in Carrer de Rafael Casanova, the birthplace of the Commander-in-Chief of Barcelona and symbol of Catalan resistance in 1714, open for visits. The same building houses the Archaeology and Palaeontology Museum, closely linked with the very interesting Toll Caves you’ll visit in the afternoon.

You’ll see the monument dedicated to Casanova after you leave the church. At one end of the square with the sculpture you’ll notice the houses with modernista elements. Further on you’ll be in Carrer Richard Wagner, with the façades bearing the names of some of the composer’s operas. The reference to Wagner is because one of the best tenors to ever perform his scores, Francesc Viñas i Dordal, was born in Moià in 1863.

You deserve a good meal, book a table at Les Voltes de Sant Sebastià, in Moià. They serve traditional and market cuisine updated with innovative dishes, with a particular emphasis on local products from the Moianès region.

Don’t spend too long chatting after lunch because you still have to visit a very special place before returning home: the Toll Caves. They’re on the outskirts of Moià and were inhabited by people and wild animals from prehistory! Our ancestors must have groped blindly around the caves but now we are lucky to be able to see over a kilometre of well lit beautiful and unique galleries. And accompanied by a guide who will tell you, among other things, how they were discovered in 1948, what finds have been made, what excavations are underway, and how, in other times, the sea flowed through here. A perfect outing for the whole family!