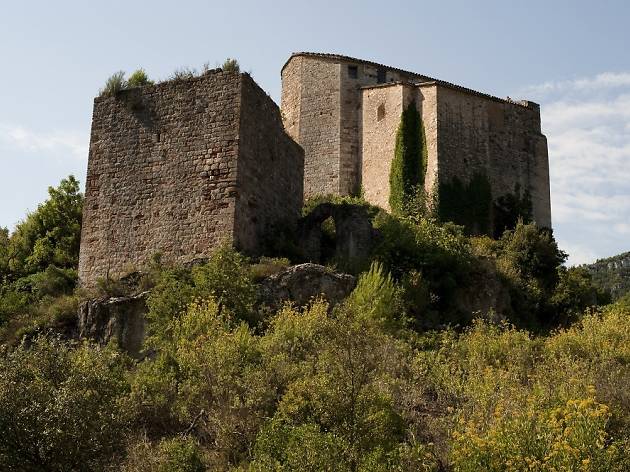 A thousand years of history looks down on you from the Torre Grossa of Mediona Castle in Alt Penedès. Since its construction in the 10th century – probably on top of an existing Saracen building – many years, lives and architectural styles have passed by, but it has never been uninhabited. In the 21st century, this monumental edifice houses multiple social, cultural and leisure activities. Apart from the peace and contact with nature you’ll find there, they also organise regular get-togethers, workshops, courses, exhibitions and guided visits.

For a few hours, you will explore this castle that is soaked in history and located in the middle of the countryside. Found at the top of a mountain pass on the Bolet range, low-lying among hills and vineyards, the castle is accessible via a single road – an ideal route for transporting you to the medieval world, like the knights who, asleep on their horses, were bewitched by fairies and taken to a marvellous alternative dimension. To get there, head out of the town of Sant Quintí de Mediona and take the C-244a towards Sant Joan de Mediona. Turn onto the side road signposted as the way to the castle, around the 18-kilometre point. These instructions apply if you go by car, obviously. If you’re walking, on horseback or bike, then you can get there by taking C/ de Ponent along a path among the vines until, when you reach an old factory, you’ll find a sign indicating the way to the castle. An unmissable experience, the climb on foot or bike is a pleasure aimed at lovers of hiking.

If the weather is good, and you’ve got time to spare, stop before reaching your destination to explore the woods along one of the paths covered by the extensive vegetation. When you get to the castle, you’ll see a primitive 10th-century building that has been gradually transformed into its current state by numerous generations of inhabitants. A Romanesque chapel from the 12th century was expanded in the 13th and 14th centuries in the gothic style, there is a Knights Templar building from the 13th century and, finally, the Torre Grossa (Large Tower), built in the 15th century by the Duke of Cardona. This simultaneous chronological and architectural tour will be well explained to you if you take one of the castle’s guided tours, which need to be reserved in advance, and will make an excellent end to your first day in Alt Penedès.

At the foot of the castle of Mediona, the town of Sant Quintí de Mediona stands on the mountain, and was created at the same time as the fortress. Its origins, as with most of the local towns, are linked to the border between Arab and Christian lands during the time of occupation (8th-9th centuries AD) and, in fact, are the product of the inevitable mixing that occurs in neighbouring areas.

In this case, it seems that it was the guest house of a priory of the Monastery in Ripoll that led to the establishment of a stable population during the expansion of territory between the 10th and 11th centuries. The house or monastic cell, which was constructed under the protection of Ripoll, can still be visited today and is the best place to start a tour around the town, in Plaça de l’Església. There are few original remains as time has not been kind to the building, but there are some details from the past. At the Old Rectory (Rectoria Vella), you’ll find what was once one of the access points to the property. Also still in place is a gateway with a tapered stone arch and sculpted cross, as well as a number of windows decorated with renaissance reliefs. If you’re a fan of visiting churches, you will quickly recognise the arcades of the cloister that, even though they no longer serve their original function, are a reminder of what was once here. Alongside the monastic house, the priory of Sant Quintí de Meniona also has a church, nowadays the town’s parish. Although it has no original remains, the main door has vestiges of renaissance style.

Come out of the church and take a leap through time: there are two activities to choose from, it’s up to you which you do, one or other, or both. The first is the paper mill of Ca l’Oliver, which started operations at the start of the 18th century. You can get there by walking from the old town along the Camí de Ca l’Oliver path. The second, on the other side of the town, are the Fountains de les Deus, at the foot of the river Torrent del Duc, from where a good number of walking routes around the town begin. If you do both activities one after another, it’ll be a good way to see the whole of Sant Quintí de Meniona. Just by the fountains, you’ll find a place where you can enjoy various adventure sports, which will doubtless help you work up an appetite before lunch. If you’ve still got some energy left over, within the municipality of Sant Quintí de Mediona there are around 50 natural springs – what could be better for coping with the summer heat? 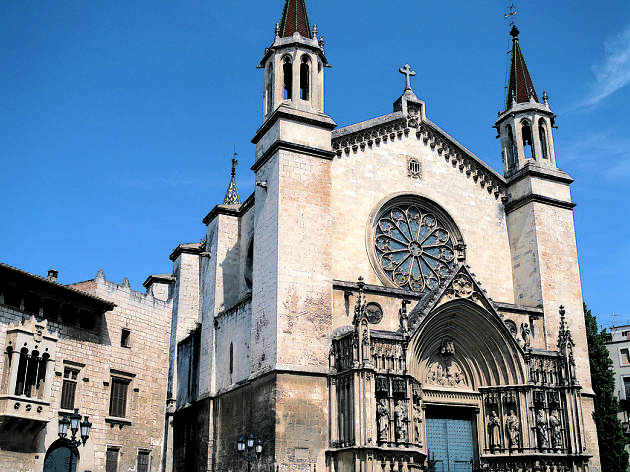 A cradle of popular culture, a political and social epicentre, and a symbol of local, Vilafranca del Penedès is a place where you must stop during your trip. The best time to go is, without doubt, at the end of August, when the heat has subsided slightly and, more importantly, Sant Fèlix arrives on the day of the town’s Festa Major (principal festival). The city is transformed for five days, with the streets full of life and fire. During the festivities, there will be a human tower performance in Plaça de Sant Fèlix, at which point, the vital energy of all Vilafranca will be concentrated in this one place and moment.

As well as the specific festivals, the city provides a wide range of notable tourist attractions. One option is to go hiking among the vines and cover, whether walking or cycling, the four kilometres to the Pujols wood. If, on the other hand, you want to stay in the city, we have two suggestions. The first itinerary is the modernista route, which will let you admire the arrival of modernity and the progress of Vilafranca at the end of the 19th century; a visit inside the Casa Miró is not to be missed. The second, the medieval route, will lead you through the historic centre of the city and introduce you at first hand to two key events in the history of Catalonia: the death of king Pere el Gran (Peter the Great), in the Royal Palace, and the events that led to the Concórdia de Vilafranca. The signing of this agreement resulted in the 15th-century Catalan civil war between the royal Trastàmara family, who at that time ruled Catalonia, and the Generalitat, the Catalan governing institution.

Continue your tour of the area around the Royal Palace and Plaça de Jaume I, via C/General Prim, until you get to Plaça de la Vila, Plaça de Sant Joan and, further on, the Convent of the Holy Trinity. The network of streets will bring you back to Plaça de la Constitució, just by where you started, and here you can visit the Basílica de Santa Maria and the bell tower. In the crypt, there is a magnificent group of sculptures of the Descent from the Cross created by Josep Llimona (1864-1934). Close to the basilica, you’ll find the very interesting Vinseum, Museum of Wine Cultures in Catalonia, where you’ll dive into the history of the drink in an interesting way, using modern interactive and other features. 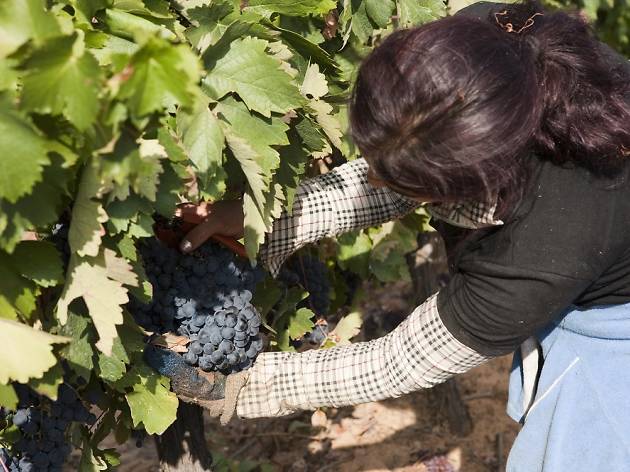 Understanding the Penedès means understanding wine. So of course it’s imposible to visit this area and not spend at least one morning travelling the roads that connect the towns around Vilafranca del Penedès: Torrelavit, Puigdàlber, la Granada, Santa Fe del Penedès… Next to the road, thousands of rows of vines are perfectly laid out, organised right down to the millimetre. Surrounded by vineyards, this morning we suggest an original visit to Pla del Penedès.

To get to this small Vilafranca town, take the C-15 road towards Igualada. Once parked, you can take a look around the centre, old but renovated to take into account daily life, although it retains an air of being from another century. What we recommend is, however, not a conventional visit to the town, but instead to take part in an historic ritual: a day experiencing the wine harvest on the estate of Jean Leon.

The activity will, as well as offering an idyllic excursion among the vines and branches, allow you to get to know the history of the property and enjoy a typical farmers’ breakfast. A unique experience for immersing yourself in the meaning of wine, land and tradition. 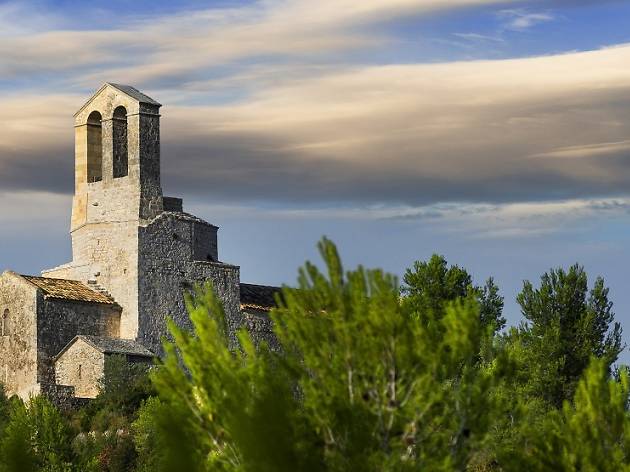 Paradoxically, you’ll start and finish your getaway to Alt Penedès not among the vineyards but in the mountains, highlighting the fact that the county is rich in landscapes. This final afternoon will be spent on a trip to the Parc d’Olèroda, close to the Garraf massif. Within the park’s borders, there are three kinds of typical Mediterranean vegetation: woods, crops and maquis, which are accompanied by a beautiful view of the church of Sant Miquel, almost 400 metres above sea level. The church, which dates from the 12th century, forms part of an interesting site, where remains from the Neolithic and Bronze Ages have also been found.

Iberians also settled in this place and, in fact, they constructed part of the wall that still stands today, 3,000 years after the first stone was put in place. It was the Romans who took up the construction of the settlement, completing the wall and adding a water tank and watchtower. In the middle of the first century BC, Olèrdola was abandoned and remained so for many centuries until the Christians regained the area from the Saracens. The castle and the first indications from the medieval period date from around the 10th century and up to the 13th.

From its privileged position, the fortress of Olèrdola has been a protagonist in almost all the main wars fought in Catalonia, from the Arab invasions to the Peninsular War in the 19th century. Delve into history and the countryside to round off your getaway.