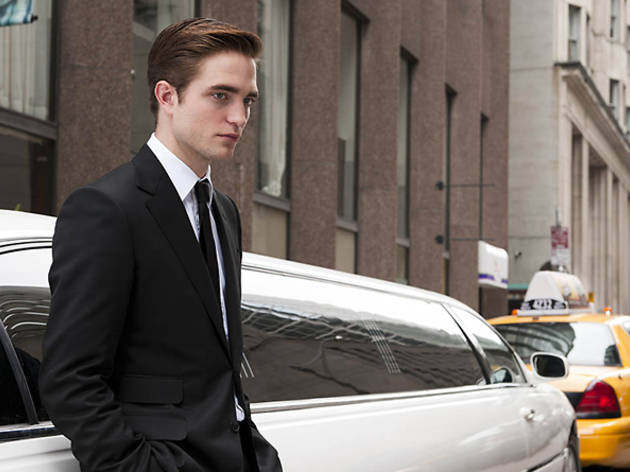 Prophetic though it was, Don DeLillo’s 2003 novel—now a whip-smart film about meltdowns global and personal—gets one thing absolutely wrong. (So does the movie.) Consider some of cinema’s past greedmongers: Michael Douglas’s ravenous Gordon Gekko, his face strained with impure appetites, or Christian Bale in American Psycho, plenty active to burn off those extra calories. These beasts fit the rapacious moods of their day, extensions of the market.

Cosmopolis, on the other hand, has too-cool Robert Pattinson as its 28-year-old billionaire about to fall (leap?) into the maw of economic collapse and OWS rage. Its hero should look a lot less collected, no? Shouldn’t his pulse be irregular, his exuberance more irrational? During a daylong trip across a traffic-jammed Manhattan, hypervigilant Eric (Pattinson) is even visited by a prostate-probing doctor, who does the examination right there in the soundproofed limo—apparently, these checkups occur daily. (Were the housing market as lucky.) Pointing to a mole on his torso, Eric frowns. “Let it express itself,” says the doctor.

Director David Cronenberg—who knows a thing or two about bodily expressions—understands, finally, what to do with the Twilight star, turning his zombified handsomeness into a stark canvas upon which we can project our own anxieties. Undervalued as a subverter of the A-list, Cronenberg uses Pattinson’s own blankness (let’s call it a career performance) as the visage of an unpersuasive godhead, surrounded by computer screens that don’t comfort him. Crawling through a city throbbing with unrest, Eric makes time for a dalliance or two—not with his wife, a brittle ice queen (Sarah Gadon), but with other women—and still, he doesn’t seem at ease. He communicates most with his tight-jawed security aide (Kevin Durand, fierce) who warns him of upcoming obstacles and vague messages from the “complex.” The pair could be miniaturized travelers in an updated Fantastic Voyage, the dying body that of late capitalism.

Where is Eric going? To get a haircut, we hear early on. Cosmopolis is close to experimental in its denatured, deceptively banal plot. (Cronenberg probably required his lead actor’s name just to get it made.) The movie grows, though, into something hypnotic and ominous. A parade of temporary companions makes its way through the backseat cabin: a nervous tech wizard (Jay Baruchel), an art-dealing sex partner (Juliette Binoche), a vice president of “theory” (Samantha Morton) and a pie-throwing terrorist (Mathieu Amalric). All of them raise alarms in their own way, pointing to Eric’s doom—his inability to understand his own potency, his blithe willingness to buy an entire chapel of Rothko oils just to keep them in his apartment.

DeLillo’s comment wasn’t exactly profound: These business types have no souls. Frankly, the book reeks of reaching too hard—where do all the limos go at night? Yet Cronenberg, who adapted the script himself (as he did with Crash and Naked Lunch), flatters the material into a sensual, propulsive thriller, the apocalypse as viewed from lush interiors and a hermetic remove. It’s more than spooky.

Ultimately, Cosmopolis is a theory movie, one that’s made unusually accessible by filmmaking chops, rear-entry sex and spiky dialogue. It could have used more humor: When a hulking rap promoter shows up to mourn a dead celebrity—the saintly Brother Fez (K’naan)—Eric’s wanksta sympathies provide a rare moment of levity. (Howard Shore’s sinuous score, including the K’naan number “Mecca,” is tops.) It all comes down to a disgruntled 99 percenter with a gun—again, way too obvious—but until then, the cruise is slick as an oil spill.