Fan of meat and potatoes? You're in the right place. Try the city's best local eats, from bratwurst to beer and frites.

It’s often been said that butter and salt are the German cook’s go-to spices. In Düsseldorf, add a dollop of the city’s infamous spicy mustard and you’re well on your way to understanding local taste. While there’s plenty of traditional German fare to be found on the menu at breweries, where meat-heavy meals like the Rheinischer Sauerbraten are washed down with an Altbier, Düsseldorf has a rich immigrant history that has helped fancy up the German palate a bit. You can find some of the best sushi and ramen here, thanks to a large community of Japanese immigrants. At Christmas, grab a fried potato pancake with applesauce, known as a Reibekuchen, and a mug of mulled wine (Glühwein) at an outdoor market and call it a meal. Although German food can be quite heavy, vegetarian dishes are increasingly lightening up local menus; if you do have dietary restrictions, though, be sure to ask if those potatoes or pumpkin soup have speck (pig fat) in them. 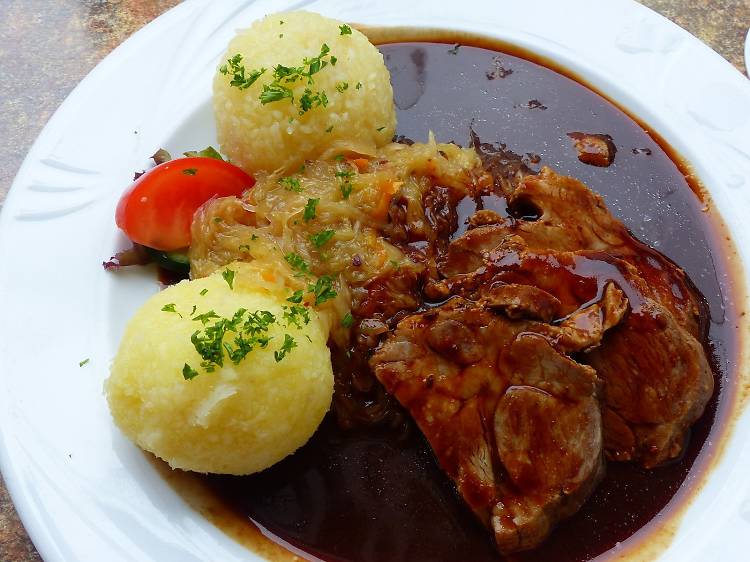 No visit to the Rhineland would be complete with trying a good old-fashion Sauerbraten. A uniquely-spiced beef roast (sometimes made with horsemeat) marinated for days in a vinegar dressing, it acquires an acidic taste that pairs well with sauerkraut. In Dusseldorf, they even have their own variation on the traditional roast known as the Düsseldorfer Senfrostbraten, which has the meat covered in the spicy local mustard the city is known for. Though its strong flavor is not for everyone, the beef roast serves as a nice break from the pork-heavy traditional German fare.

Where to get it: Hausbrauerei Zum Schlüssel 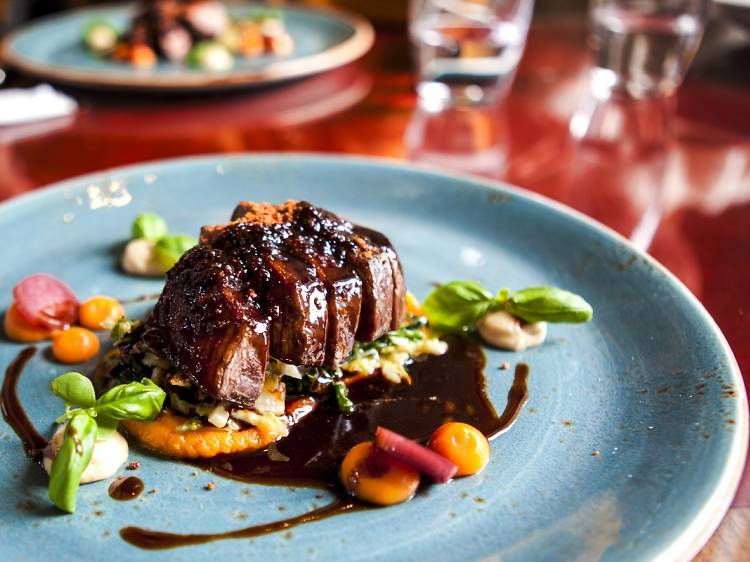 Deer are a rare site in Düsseldorf, thanks to the large populations and heavy industrialization of the area of the last century. That makes venison even more of a delicacy—and one that pops up on the menus of the city’s most sought-after restaurant addresses. Traditionally, the meat is served in small portions, sliced either into medallions or made into a goulash with a thick brown gravy that balances out with its game-y wild flavors. 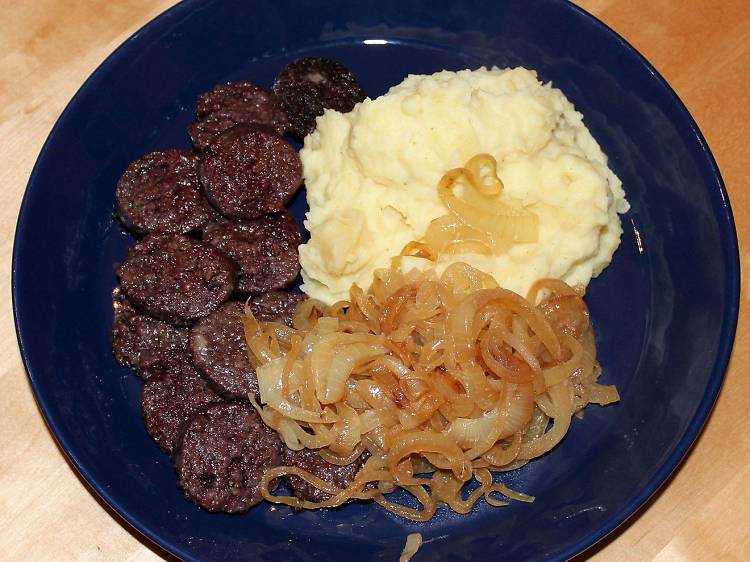 Drawing its name from the apples and potatoes comprising the dish, Himmel und Äd is a brewhouse specialty in Germany’s Rhineland region. The apples represent the fruits of the heaven; the potatoes, the earth. Don’t get fooled into thinking this is a vegetarian dish, though (as some locals might tell you): the mashed potatoes and apple sauce are just side dishes for the main course: blood sausage or black pudding, slathered in bacon-fried onions.

Where to get it: Brauerei zum Schiffchen 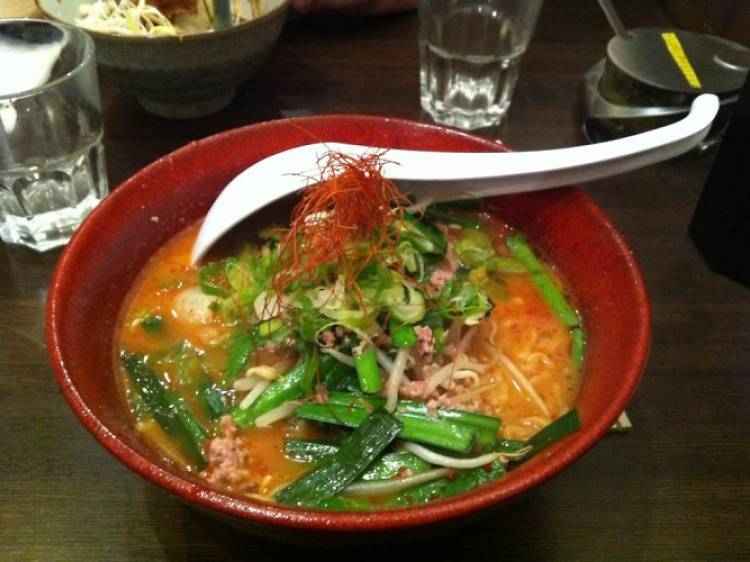 Noodles aren’t the first thing to come to mind when thinking of typical German cuisine, but Düsseldorf isn’t your typical German city in many of ways. Nowhere else in the country are you treated to such delightful Japanese dishes as you are in Düsseldorf’s Japan Quarter. The long-term immigrant community that’s made the area home also brought a taste of Japan with them, opening sushi bars and ramen shops throughout the neighborhood.

Where to get it: Takumi 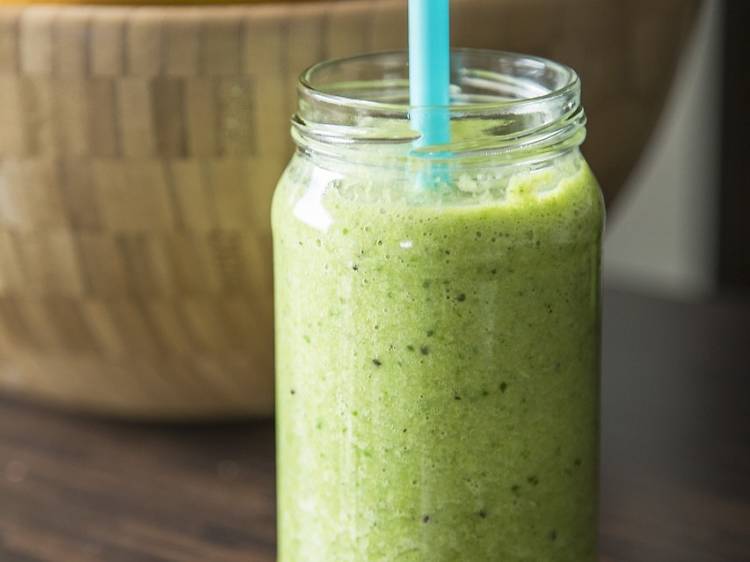 You know those ubiquitous smoothie shops we find all over the US? They’re still a rarity in Germany, only just having arrived in the last two years. That’s good news, though, for those looking for healthy meals, because now that they’re here, smoothies are all the rage in Düsseldorf. Frequently found on the menu alongside granola—aka Muesli—the green smoothie has sparked a trend toward lighter eating that goes down well with the fashion and arts community in Düsseldorf.

Where to get it: Laura's Deli 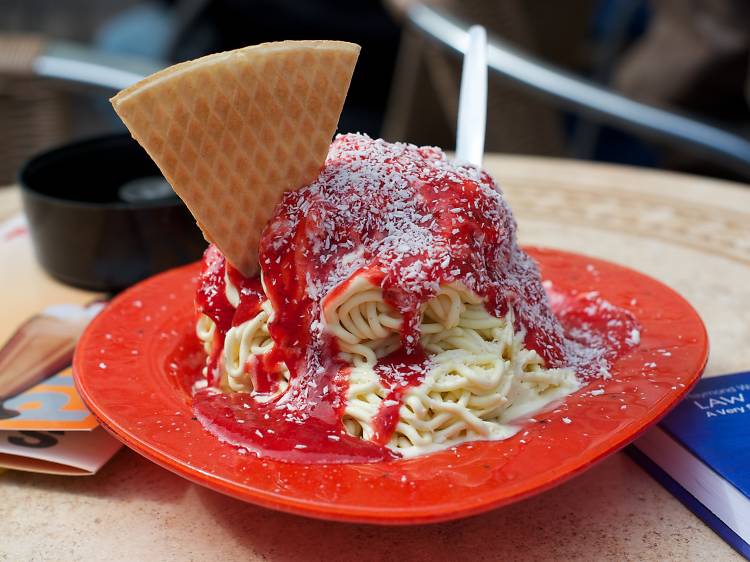 As soon as the temperatures are above freezing, Germans cry out for their beloved ice cream and every outdoor space begins filling up with sidewalk cafes serving frozen parfaits of all kinds. Forget the chocolate sundae, though. The truly unique way to eat ice cream in Germany is to get your hands on a Spaghetti Eis—a plate of vanilla ice cream pushed through a noodle press, covered in strawberry sauce and sprinkled in white chocolate. The only thing remarkable about the concoction is its presentation, but it’s fun (and photo-friendly) to spring for a scoop.

Where to get it: Giovanni L. Gelato de Luxe 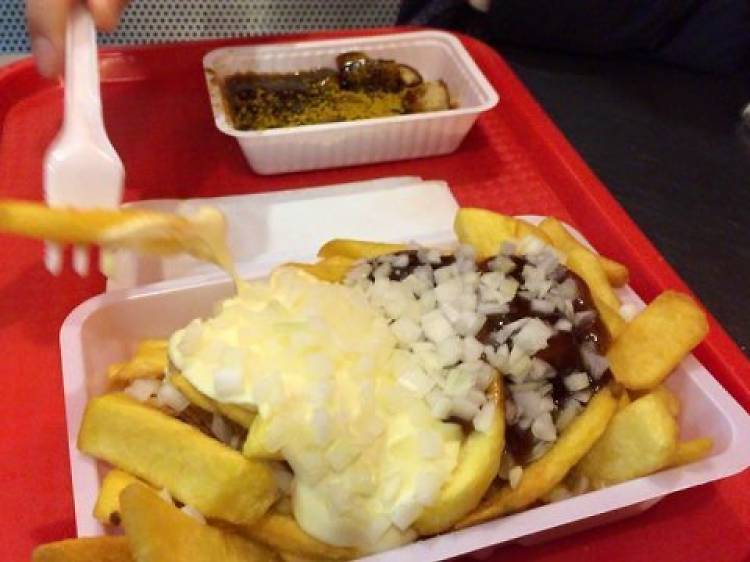 Germans love their potatoes, cooked in all shapes, sizes and styles. Reibkuchen—or potato pancakes—are a Christmas treat and potato soup is a staple in the wintertime; but French fries are on everyone’s menu year-round. You’ll often see people strolling the streets with a newspaper cone filled to the brim with the chips, a sign of just how much people here love their Pommes frites.

Where to get it: Fritten Piet 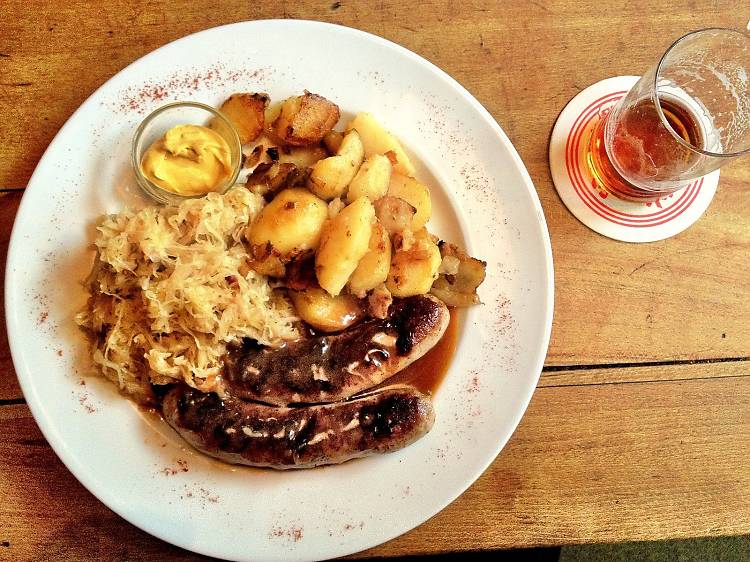 Is beer a meal? The local Düsseldorf brew sure feels like it! Rich Altbier does make you feel full but to play it safe, most locals in for a night of drinking will head to the brewery, where every cliche German food you can imagine is on the menu. But don’t order it all at once! Those who visit breweries are in it for the long haul and the local approach is to pace yourself. With the first beer, grab a Mett sandwich—raw pork tartare, served with raw onions on black bread that looks unappealing to the uninitiated. Then it’s on to a bratwurst, served with ketchup on a too-small white bun. The idea is to use the bun as a napkin fitted perfectly into the palm of your hand while enjoying the sausage on its own. Still hungry? Potato salad like Oma made it is on every menu—and though every family has its own recipe, in the Rhineland, that often is bacon-spiced and mayonnaise-free.

Where to get it: Brauerei Ferdinand Schumacher 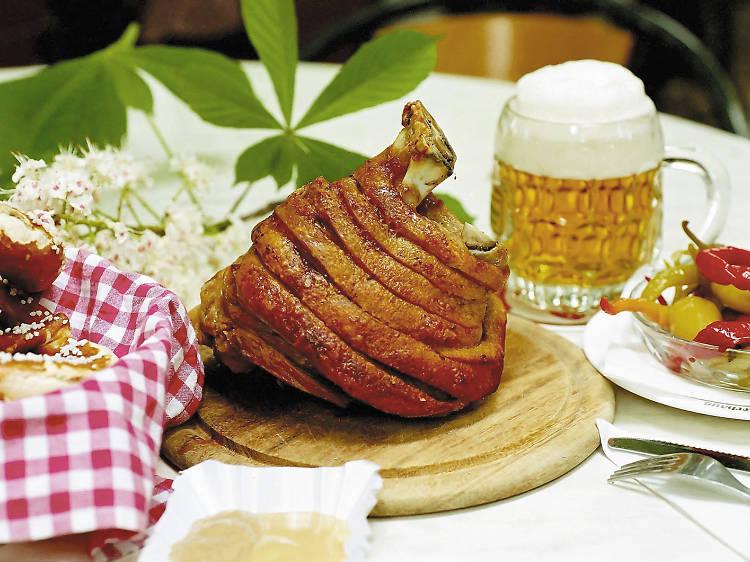 When it comes to cooking, Germans eat the whole hog—and Düsseldorf locals are no exception. Schweinshaxe is considered something of a special occasion meal, not often made at home as getting the pork knuckle just tender enough takes some time. Traditionally served with mashed potatoes and sauerkraut, the Schweinshaxe is a heavy meal worth savoring. Its popularity at breweries is a testament to just how dearly Germans enjoy their pork.

Where to get it: Zum Uerige 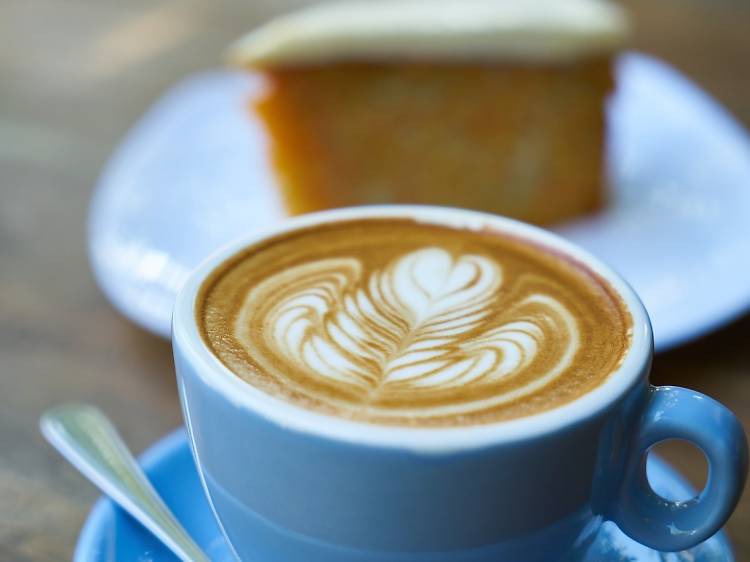 Whereas the Brits are known for their high tea, in Germany the tradition is an afternoon coffee and cake affair. As much about the fellowship as it is about the eating, the atmosphere plays a huge role in deciding just how to go about the ritual—and determines which cake you’ll be sticking a fork in, as the selections rotate near-daily and are influenced by whatever’s in season. We’re not talking about standard layer cake, either.

Where to get it: Oma Erika 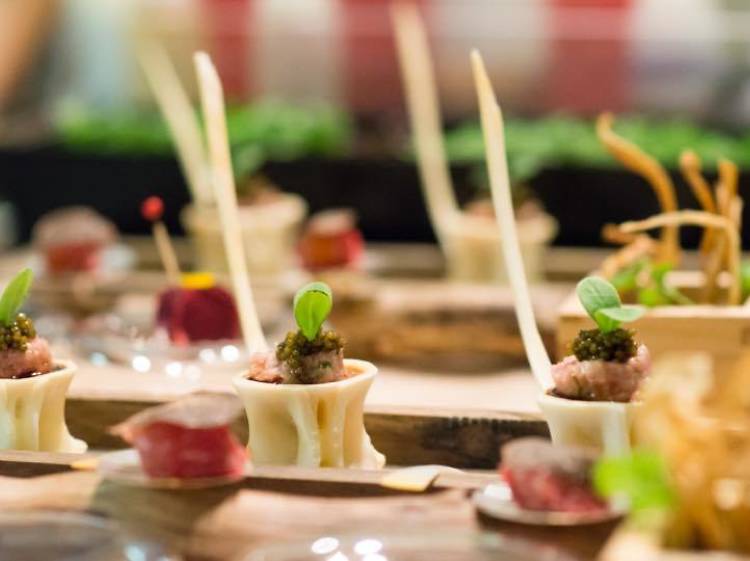 The best restaurants in Düsseldorf

Though often overlooked in favor of bigger, splashier German cities like Berlin or Cologne, Düsseldorf is an underrated gem, known amongst those who love it for its creativity and culinary eclecticism.