The 10 most beautiful buildings in Düsseldorf

Düsseldorf is one of Germany’s most architecturally significant cities—just be sure to check your stereotypes of what’s “typically German” at the border. With a name that literally means the Village on the Düssel River, Düsseldorf only grew into a major metropolis after World War II. Allied bombings had ravaged nearby Cologne and in the rush to get a functioning center of government up and running in the west, Düsseldorf was appointed capital of North Rhine-Westphalia—much to the chagrin of the larger Cologne, with which the city shares a friendly rivalry.

The devastation of the war means that much of Düsseldorf is either reconstructed or employs modern architectural styles, making the traditional timber-framed houses many associate with Germany a rarity. Instead, the city’s reputation as a hotbed of industry has led to magnificent steel-and-glass buildings, like the Stadttor, going up around the skyline. It has drawn contemporary architects like Frank Gehry to the Media Harbor, where he modernized structures aesthetically while repurposing them from their original use as warehouses and port structures. Even those buildings which remained standing after the war, like the former parliamentary building now housing the K21 art museum has a modern touch, with a glass-domed roof.

Most beautiful buildings in Düsseldorf 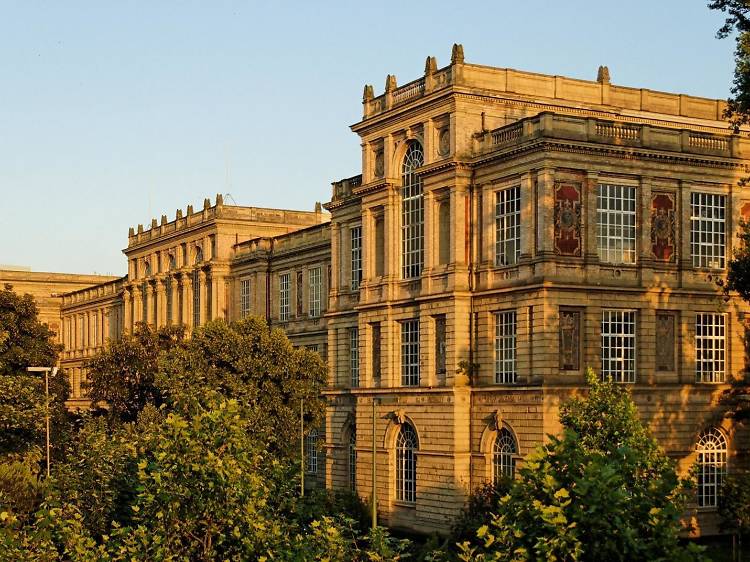 Getting inside the Arts Academy in Düsseldorf can prove slightly more difficult than gaining entry into one of the exclusive programs at the world-famous art institute. And with alumni like Gerhard Richter and former professors like Paul Klee and Joseph Beuys, that’s saying a lot! The academy’s motto, “For our students, only the best,” can be seen inside the building’s corridors, where white walls, lofty ceilings and arched foyers give the impression that everything is a canvas, clean and ready for your creation. Barren and monastic in its minimal aesthetic, the building’s interior is inspired by Marcel Duchamp’s ideas of minimalism and conceptualism. For those eager to get a peek beyond the exhibition areas open to the public, there are free tours (with registration only) for a week in February. Most of us will have to make do with admiring the Neo-Renaissance building from the outside, with its grand limestone facade filled with windows. 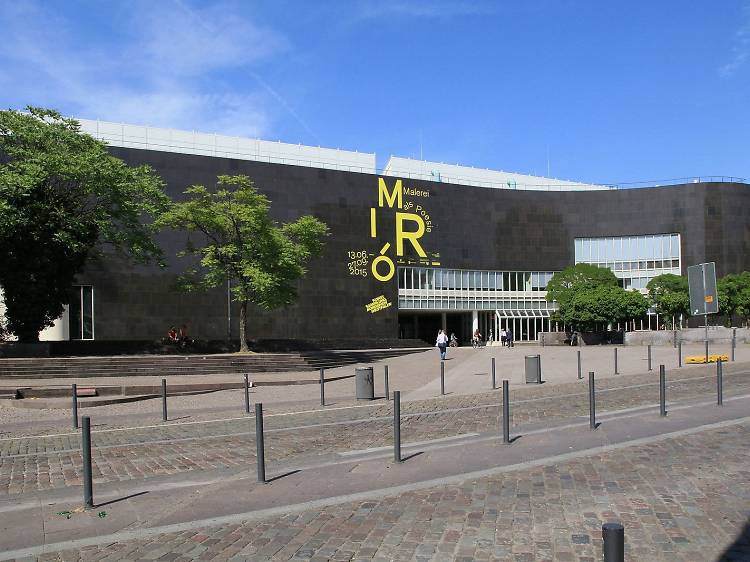 Choosing between the city’s two contemporary art museums is an impossible task. The K20 has an extensive arts collection with works by some of the biggest names in 20th century art; its permanent collection began with 88 artworks by Paul Klee which had been declared degenerate by the Nazis, and spans Dadaism, surrealism and expressionism. Such a modern museum demanded a modern building and in 1986, the K20 was created, a granite masterpiece that takes on the shape of a wave, signifying motion. A seamless 2008 addition gave the curators more space inside without breaking the aesthetic flow of the outside. 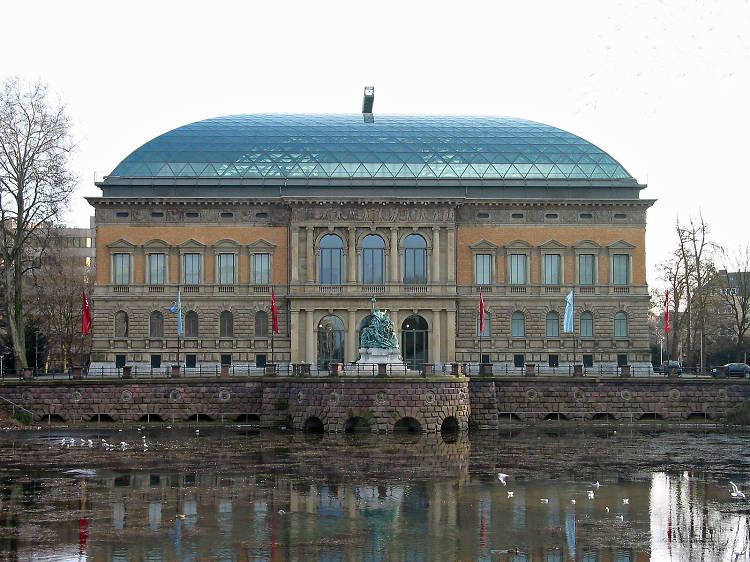 When the K20 museum grew too big for its britches in 2002, the city took over the former parliamentary building dating back to 1880 and modernized its insides to match the contemporary art it would house. The result is astounding—a majestic, glass-domed building set off by a small pond in the heart of the city. Although a real looker from the outside, it’s what’s inside that counts. Exhibition rooms take over three floors of the building, with rotating displays featuring the work of contemporary artists. Most eye-catching, however, is the art installation, in orbit, created by Tomás Saraceno, who spanned nearly transparent wire nets across the top of the piazza, giving visitors the illusion they are walking on air. 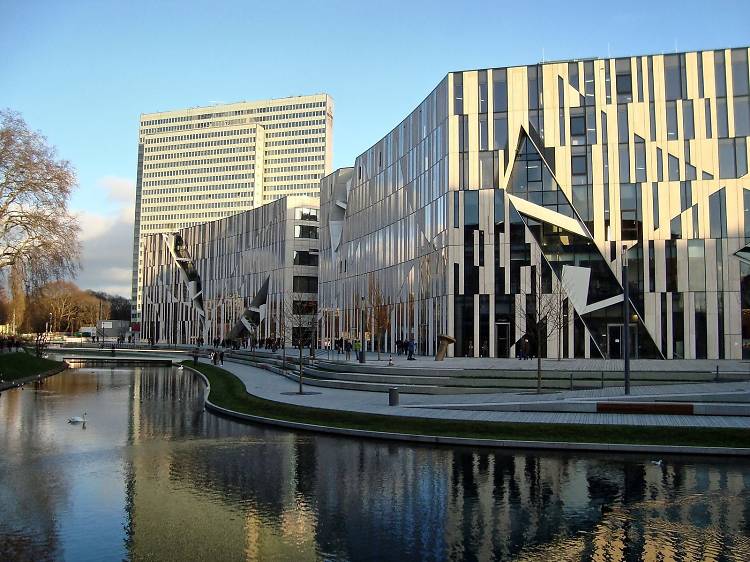 Beauty is in the eye of the beholder and nowhere is that truer than in the 2009 shopping mall/office building known locally as the Kö-Bogen. Designed by Daniel Liebeskind, the building made of glass and white stone houses luxury goods shops at the north end of the city’s most famous shopping street. Foregrounding the Dreischeibenhaus (the former headquarters of Thyssen Krupp), the award-winning Kö-Bogen picks up on the aesthetic of the nearby skyscraper while creating a contemporary architectural masterpiece that stands on its own. Named Bogen, for the bend, or curve, that the building takes, the north and west sides include “cuts,” which create a geometric pattern that appears to slice through the facade. The building was recognized for its contribution to city renewal as it created a new urban center for Düsseldorf that attracts visitors from around the world. 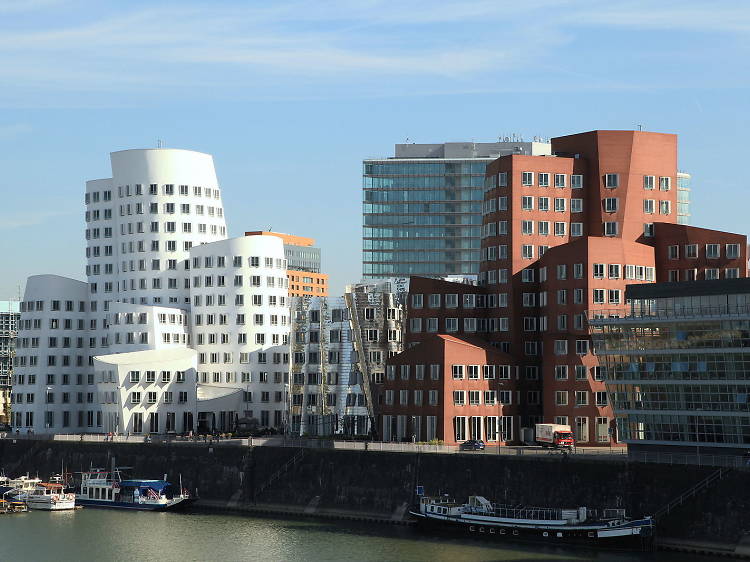 5. Neue Zollhof (aka, the Gehry Buildings)

Best viewed from the water, the Media Harbor is a cornucopia of post-modern architecture. The most famous of the distinguished architects to have contributed designs for the redevelopment of the harbor’s riverfront buildings is Frank Gehry. Gehry’s buildings have become symbols of the city’s rebirth as he converted the former customs houses into three distinct yet stylistically interconnected structures that now house the city’s advertising and media agencies. The red brick, white plaster and stainless steel buildings in the shadow of the Rhein Turm tower stand out for their unique curves and artsy, though not overdone, look. 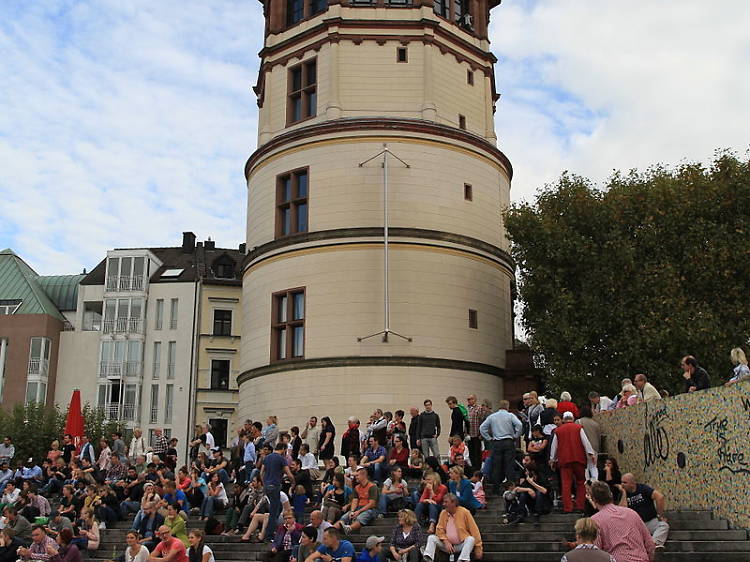 Düsseldorf is not all about post-modern aesthetics, but finding pre-war relics is a rarity. A late baroque palace originally constructed in 1260 that served as home to the Count of Berg burned in the late 19th century. All that remained was the castle tower, and it’s this Schlossturm which you see standing today at the protected Burgplatz. Located directly on the riverfront, the castle held great significance to the town, serving as a gallery and one of the original homes to the Kunstakademie. A look at the Schlossturm from outside can give you an inkling of what the old town must have looked like in its heyday. Today, it houses a shipping museum. 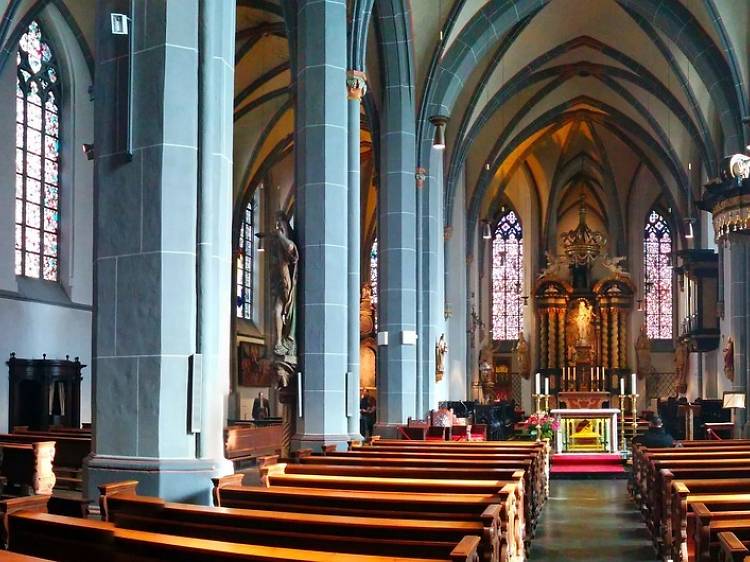 On the north end of Burgplatz square is the oldest building in Düsseldorf, one of four Roman Catholic churches in the city: St. Lambertus. While its roots can be traced back to the 12th century, explosions, storm damage and fire have all gotten the best of the holy site. Legend has it that it wasn’t the explosions but the devil having a tantrum that created a twist in the roofing at the bell tower—one which was recreated at locals’ requests to maintain the quirk during post-war reconstruction. Lovers of church art and organ music will have a field day inside, with the church’s baroque high altar, gold reliques and magnificent organ done in French-Romantic style. 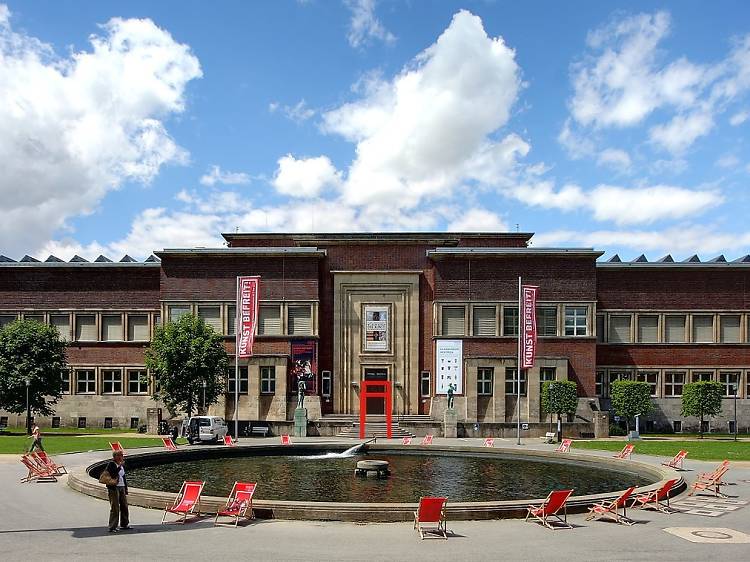 The expressionist buildings and gardens that comprise the Ehrenhof complex date back to the 1920s and have a storied history despite their youth. Shortly after they were completed, the buildings played host to the largest art exhibition in the Weimar Republic. During the war, building five served as a labor camp for Western European POWs. That history gives one different impression of the perfectly symmetric layout of the building complex, with its tended gardens and planned order. Today, the relatively unadorned facades of the Weimar-era buildings betray their importance as cultural centers, housing the Kunstpalast, the NRW Forum—a center for dance and theater events—and the Tonhalle, where concerts are held. 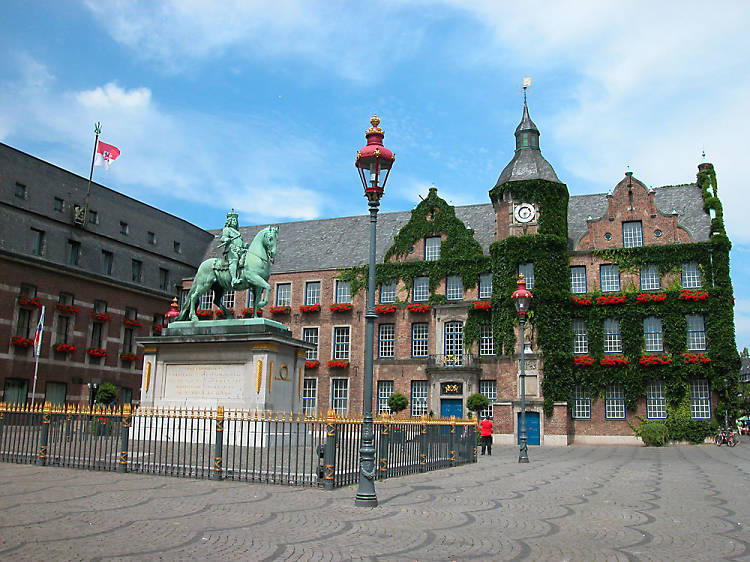 Comprised of three buildings, all constructed during different time periods, the city hall is right in the heart of Düsseldorf and will surely catch your eye as you pass by on your way about town. There is the “old city hall” on the north side of the Market Square, a second from the period of Emperor Wilhelm II and to the west, the Grupello House. The old city hall is the building that most often draws attention, with its brick Renaissance facade from the 16th century. Inside, remnants of the building’s architectural glory can be seen in the detailed hand railings along stairways. Although the new city hall and the Grupello House addition (named after a 17th century artist who resided in the building) have been conjoined to the original city hall, they had to be renovated following the war and have taken on a bit of an administrative aesthetic, as expected from a city hall. 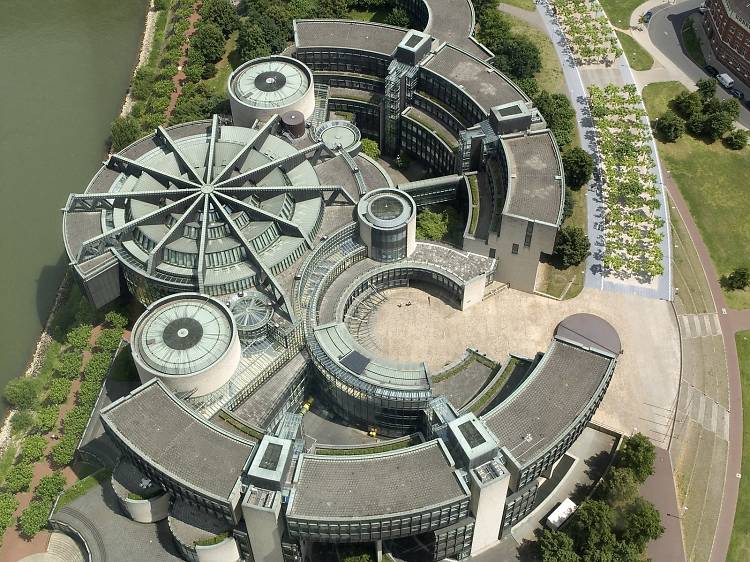 When the British declared in 1946 that Düsseldorf’s location in the heart of an industrial region made it ideal to become the capital city of the state of North Rhine-Westphalia, there were hardly any buildings standing that could house the government. The first meeting, then, of the Landtag or state parliament, took place at the Düsseldorf Opera House. From there, the government went on to meet at the reconstructed Ständehaus before finally, in 1988, gaining their own parliament built to suit their needs. Like with many government buildings in Germany, the architects aimed for a style that reflected the transparency that locals expect to see from their government and as such, is covered in walls of windows. The building takes on a circular shape to avoid corners. Load-bearing walls made of sandstone blend into the natural landscape of the building site right on the Rhine river, and a glass-domed ceiling covers the plenary chambers.