The most-Instagrammable places in Düsseldorf

Point your camera at the city's most post-worthy sights, from eclectic cafes to architectural marvels and street art

The contrasts in Düsseldorf make it the perfect place to liven up your Insta-grid. From the stellar street art on  beautiful buildings and skateboard pipes lining Kiefernstrasse to the glittery new architecture of the Media Harbor, the city has something to inspire every Instagrammer. Inside the K20 and K21 museums, you can capture the contemporary art scene with ease; or head to Nord Park or the Schloss Benrath to add a bit of the natural world to your camera roll. Even if you’re only in town to shop, you won’t come away empty-handed: the canals along Königsallee and nearby Kö-Bogen retail complex are some favorite backdrops, and a great place to empty your wallet.

If you like street art, you’ll love Kiefernstrasse on the border of the south Flingern neighborhood and Oberbilk. Originally conceived of as workers’ housing when opened in 1902, the buildings along Kiefernstrasse are smack dab in the middle of an abandoned industrial district. The street has a storied history, with many homes used as squats, then refugee housing; there was even an infamous arrest of a member of the RAF here in 1986, which led to the area being designated by a politician as “the center of terrorism” in Germany. Today that designation is laughable, but the squat-like, freestyle community atmosphere lives on. Turn-of-the-century façades are covered in colorful murals and street art adorns every free space, a perfect backdrop for the edgy—though very safe—area.

Designed before Instagram’s advent, the K20 Museum still appears to have been made for the ideal social media shot. Capture the waves of black granite outside before heading into the galleries to snap pictures of Paul Klee’s sketches or the brightly colored paintings by Expressionists. Gerhard Richter and Andy Warhol have works hanging here to inspire your own content curation. And when you’re through with the galleries, head back outside to the mosaic wall—a favorite backdrop of tiny tiles in primary colors that complement any selfie.

Take a walk on the wild side

From the outside, the K21 contemporary art museum looks prim and tidy—a magnificent glass-domed neo-Renaissance building that reflects in the pond just in front of it. Inside, though, is where you’ll take your best shots. Remodeled to house the state’s ever-expanding collection of modern and contemporary art, the K21 has an open white-walled foyer that resembles an old souk, with its arched doorways and rounded stairwell. If you’re daring, head to the top floor, where you can climb above the galleries in Tomás Saraceno’s steel mesh installation “Orbit,” and show your followers what it’s like to walk on air.

Possibly the most Instagrammed place in the city, the Media Harbor looks good from nearly every angle. With a wealth of inspiring architecture, you can have Insta-snaps for weeks after just a quick stroll. Among them is the Neuer Zollhof—three buildings designed by Frank Gehry that appear to be twisted in dance. The stainless-steel building sparkles on sunny days and is the most impressive, but if you walk along the quay you can capture all three in their natural surroundings. Be sure to snap the Oberkasseler Bridge in the background for a panoramic feel. And don’t forget the colorful rock climbers on the side of the Roggendorf-Haus (a conception by artist Rosalie) or a full frontal of Colorium (a glass tower designed by Will Alsop).

If your feed is filled with flowers, you’ll appreciate a visit to Benrath Palace and its surrounding gardens. The cotton candy colors of the castle, built in 1770, are a frequent backdrop in local wedding photos. You don’t need to don a princess dress to get the best snaps, but you will need to book a guided tour if you want to capture the spirit of an 18th century hunting lodge. The well-landscaped gardens are free and filled with 80 different kinds of birds—perfect for the nature-loving Instagrammer.

Not your average shopping mall.

It’s almost impossible to fit the Kö-Bogen—the shopping mall and office complex designed by Daniel Libeskind—into one square snap. But that shouldn’t stop you from trying! The white-and-glass aesthetic combined with the geometry of the building’s “cuts” make it an Insta hit. Housing brand-name boutiques, the Kö-Bogen is not only a favorite shopping destination, its insides are designed with Instagram in mind. Head to Breuninger to get a feel for the grandiosity of locals’ favorite department store. In the cafe Sansibar on the first floor, there’s a Scandinavian seaside atmosphere, with booths in wooden cubby holes creating a cozy look.

There are traces of Europe’s largest community of Japanese expatriates throughout Dusseldorf. Nowhere does that come to life more vividly than in the Nord Park, home to a carefully landscaped Japanese garden. A koi pond is set amidst Japanese maples; stone lanterns light the gravel path. The peaceful escape located north of the city is just one picture-worthy part of the Nord Park. Originally opened in 1937 as a Nazi propaganda exercise, the park’s entrance contains a pair of horse statues that are so unusual in their appearance, the artist behind them—Edwin Scharff—was declared degenerate.

The canals on Königsallee

A boulevard fit for a king

An esplanade created in Classicist style, Königsallee is one of the most beautifully landscaped boulevards in Germany. High-end boutiques line both sides of the kilometer-long street—a place to see and be seen. You wouldn’t know you’re in the heart of the city, though, as traffic is split by canals with two iron bridges connecting the two sides of the street. Chestnut trees give a hint as to the season and provide magnificent foliage and Insta symmetry. Grab your shot on one of the bridges to capture a sculpture of Neptune, or turn your camera north to get the Hofgarten in the background.

Not all pubs look good in pictures but here, the owners have lovingly curated unique corners that make for fun shots. The wall of liquor bottles resembles a curio cabinet. A mirror in the basement makes for great Saturday night selfies. On one wall, penguins drawn in street art style appear to be falling off the edge of a table. In this cute candle-lit cafe, it’s the details that make the difference.

There’s no better place in the city to grab a great shot of the skyline or the perfect #sunset. Inside the city’s former broadcasting tower, a monolithic concrete building that manages to show up in every image of Düsseldorf, is the Lounge M 168, a colorfully lit place to grab cocktails. The views from its location—550 feet above the Media Harbor and directly on the Rhine—are unparalleled. Grab a seat at the wall of windows and watch as the sun goes down and the city lights up. 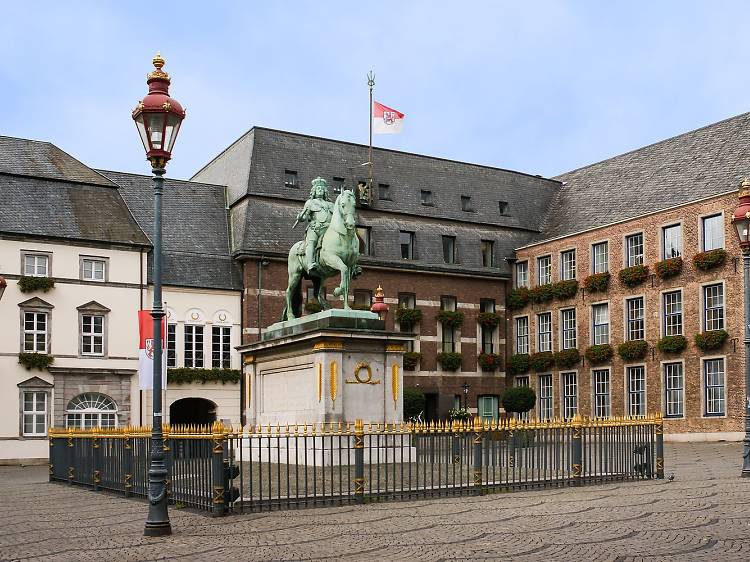 The best attractions in Düsseldorf

Düsseldorf’s worldly appeal is nothing new—Napoleon himself fell for the charms of this city on the Rhine, dubbing it "Little Paris." Between the cobbled streets of the picturesque medieval Old Town, gleaming new architecture and an ever-expanding arts scene, there are more than enough attractions in Düsseldorf worth capturing.