The Birdman director tells us how he approached Michael Keaton to play a washed-up celebrity, and how he got out of his own midlife rut

Director Alejandro González Iñárritu is bleary-eyed and hungover, but a grin is plastered on his face from ear to ear. We’re in Venice, where, a day earlier, his new film Birdman premiered to cries of bellissimo and a standing ovation that seemed to last forever. Ex-Batman Michael Keaton stars as Riggan Thomson, a washed-up actor attempting to reboot his career by staging a Broadway play. Riggan used to be famous for a superhero franchise; now he wants to be a serious actor but the world isn’t listening. The film is a dizzying high-wire feat, shot in what’s made to look like a single take with scenes stitched together so the audience can’t see the cracks. Birdman is funnier than González Iñárritu’s previous films: The 51-year-old Mexican made his directing debut with 2000’s Amores Perros (which roughly translates as “love’s a bitch”), the first in what’s sometimes called his death trilogy, also including 21 Grams and Babel. But while Birdman is a comedy, it touches on existential meaning-of-life biggies as Riggan wrestles with his own failure and irrelevance.

This is your first comedy. Why the shift?
I think I’ve made too much overwhelming drama. I’m an intense person. My own vision of life has always been heavy. I deliberately wanted to lighten myself and taste the dessert after so much chili, picante mexicana. I was surprised I could laugh on set. I’ve never laughed on set. For the first time, I was cracking up. It was fantastic to feel that I could have fun in my fucking job.

You cast Michael Keaton as Riggan. How important was it to have an actor who had played a superhero as this character?
I liked that kind of metadialogue and the authority it would bring the character. I also like Michael because he can do both comedy and drama. He’s playing a character who is selfish, a sellout and who can be a prick, but I still wanted him to be likable. Michael can do that.

You go to Michael Keaton and ask him to play a washed-up actor. What was his first response? Was he insulted?
He said, “Are you making fun of me?” I said, “No.” And I explained the reasons I wanted him: “You are one of the few guys I can count on my fingers who wore that cape. You have the authority.” We went for dinner, drank a bottle of wine. He took me home in his car, dropped me off and said, “I’m in.”

The film is about an artist battling his ego. Is there something of you in there?
Definitely. It was an exploration of my own ego; it was therapy. It’s very healthy to be aware of your ego. If you’re not, you’re fucked.

Do you think there’s a bit of everyone in Riggan? That we all have to come to terms with the fact that we’re not as important as we think we are?
That’s the story of every human being. I always thought of this guy as Don Quixote in that sense. We’re all like that. We have these ambitions that are very hard to accomplish because life puts us in our place. We have this battle with mediocrity. Everyone’s terrified of being mediocre. Everyone wants to be special. We parents tell our kids, “You’re special.” But how many people are special? Very few people are special. Everybody wants to be special. And they have been selling us that poison. That’s tragic and comic.

Technically, how do you direct these super long scenes where you can’t edit out the mistakes?
I started by putting tape in a warehouse and measuring the footsteps [against] the lines of dialogue. I basically blocked scenes using my friends: Walk here, say that. There was no room to improvise at all. Every movement, every line, every door opening, absolutely everything was rehearsed. It was a kind of a ballet and it was very fun to do. And super terrifying.

It’s a risky business. The film could have been a disaster. Did you realize that at the time?
Absolutely. Honestly that’s one of the reasons that made me do it. I realized how lazy I have become. When you are shooting in a conventional way, you put nets around yourself. It’s very hard to fall and hit the ground. You can always manipulate things to make it not embarrassing. If the scene is a little bit bad, you can polish it or even take it out. You can hide your mistakes. Here there was no mistake I could hide. Doing this, I questioned myself: Have I been relying too much on editing? Being too pussy?

Did turning 50 have anything to do with all this?
Yes, I think so. Forty didn’t hit me at all. I barely remember it. But 50 is definitely an age that hits you, at least for me. I don’t think in a bad way. I was just feeling boring, and bored about what I was doing.

So it’s your midlife-crisis film. Have you thought about making Birdman, the actual superhero movie?
Yes! I said that to my wife: “Let’s do it. Let’s fucking make Birdman, the prequel. Let’s make some money!”

You must have been asked to direct loads of big franchise movies. Ever been tempted?
No. I would be terrible. And I’ve always wanted to make films that can only exist if I direct them. Good or bad, nobody else could make them. Like having a kid—it will just be my kid.

Read our review of Birdman 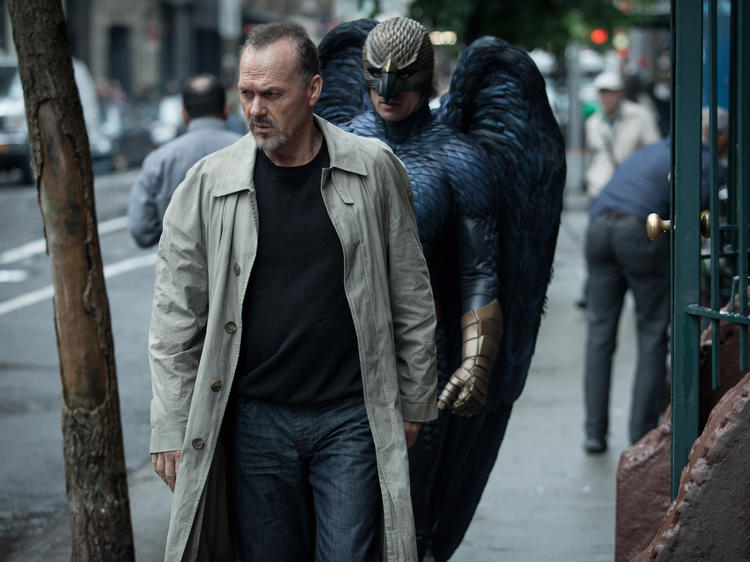 Dazzling and rambling, intimate and sprawling, Birdman is carried along by an infectious, off-the-cuff jazz score. As soon as it ends, you’ll be dying to fly with it again.

Read the full review of Birdman

Watch the trailer for Birdman