The ‘Gravity’ director spent nearly a decade figuring out how to send George Clooney and Sandra Bullock into space. Find out what took him so long

It took Mexican writer-director Alfonso Cuaron (‘Children of Men’, ‘Y Tu Mamá También’) seven years to complete his new sci-fi adventure ‘Gravity’ – but it was worth every second. Starring Sandra Bullock and George Clooney as a pair of astronauts adrift in orbit above Earth, the film pushes the boundaries of special effects and is surely the most staggeringly beautiful film of the year. So where did Cuarón find the patience to pull off such an epic achievement? And did he ever feel like giving up?

‘Gravity’ took you years to make. Why so long?
‘When I finished the script I sent it to my director of photography and said, “It’s a small movie, only two characters, so we’ll be in and out in a year.” A few hours into the first day of tests it was clear that wasn’t going to work. It took two-and-a-half years just to develop the technology.’

Did you ever feel like jacking it in?
‘It was clear from the start that it was a ridiculous task, and lots of people were telling us it was impossible. But when you’re trying to crack it, you keep going. It’s not like we were just waiting around. I was animating, I was figuring out the shots, we started work on the 3D. It was not unlike a normal film, except we had to finish post-production before we began pre-production. Then we began post-production again!’

The film cost around $100 million, yet it’s fairly experimental: just two people stuck in space. Were there any worries at the studio about how spare the story seemed?
‘I had to defend the concept from people who would say “Why don’t we cut to Houston?” or “Why don’t we cut to a flashback?” People always make suggestions – some bad, some good. Just because you’re working with a studio doesn’t mean they’re always going to have bad ideas. I have final cut. I have control. But it’s a little bit like being in the shower and trying to come up with your own tune while 40 other people are singing different tunes at the same time.’

Some have criticised ‘Gravity’ for not being scientifically accurate. How important was that?
‘Within the frame of fiction, we tried to be very accurate. The first conversation I had with the special effects team, I said I wanted to get a call from Nasa threatening to sue us, wanting to know how we snuck cameras aboard a space mission!

‘But this is not a documentary. We had a lot of support and advice from astronauts and physicists, so we’re very conscious of everything that’s not accurate. We wrote a longer draft of the script which addressed all these technical concerns – and it was so boring! People are smart enough to know this is just a movie.’

You’ve said you always wanted to be an astronaut. Would you pay big money to go into space?
‘I don’t know if I can afford it. If Time Out sponsors me, I’d be very happy to go! Naively, early on I thought I might be able to make a trip to space in the process of making this film. But I just got to hang out with astronauts instead.’

Do you think it’s a good thing that space travel is now becoming a private enterprise?
‘It’s very exciting, but they’re only offering a short trip to experience a taste of microgravity and see Earth from above. Real space exploration is much more serious. This last decade has been amazing in terms of space exploration, but the achievements are not as bombastic as someone stepping on to another planet or another moon – instead it’s data from the Hubble Space Telescope or probes going outside the solar system. The more minds and money that are invested, the more possibilities there’ll be. I just hope that the real goal of space exploration isn’t lost. It’s about knowledge.’

What will you do next? A simpler project, presumably…
‘All I know is the characters are going to walk! I’ll never make another space movie.’ 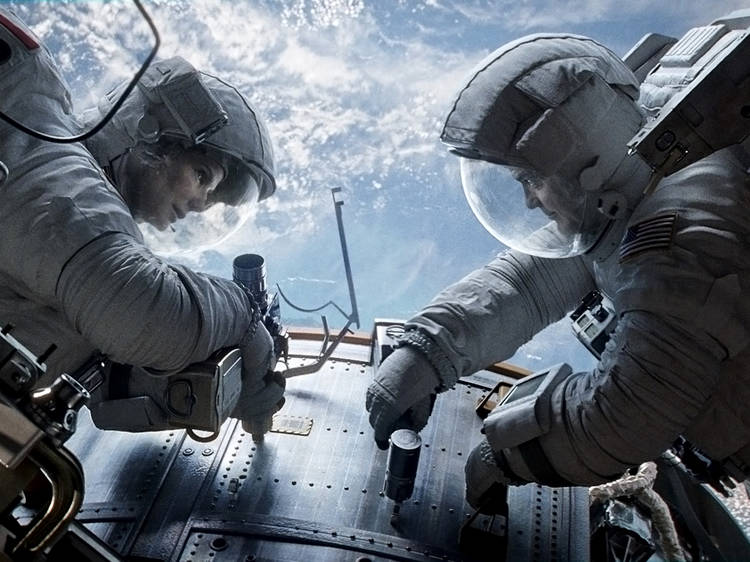 Nothing Alfonso Cuarón has done before comes close to matching the astonishing beauty, force and originality of ‘Gravity’. This isn’t just the best-looking film of the year, it’s one of the most awe-inspiring achievements in the history of special-effects cinema. So it’s a shame that – as is so often the case with groundbreaking effects movies – the emotional content can’t quite compete with the visual.