Amy Schumer is the woman whose feminist sketches are watched by millions. As ‘Trainwreck’ hits London, she talks about turning her life into a movie and why she loves Brit comedians

You might not know it yet, but Amy Schumer is about to become your new favourite person. The 34-year-old comedian is currently attracting the sort of adoration last seen circulating around that other hilarious New Yorker, Lena Dunham. TV fans probably know Schumer from her sketch show ‘Inside Amy Schumer’ – a kind of ‘Smack the Pony’ (remember that?) packed with brutally observed send-ups of relationships and sexism. Now comes a film, which she wrote and stars in, directed by Judd ‘Knocked Up’ Apatow.

‘Trainwreck’ is the story of a New York journalist whose life of one-night stands comes to an abrupt halt when she meets a sports surgeon (Bill Hader). It’s one of the sassiest and funniest films of the year. In person Schumer is confident and straight-talking. We meet at a Soho hotel the day after her crazy funny speech at the Glamour magazine awards went viral (3.5 million YouTube views and counting), but she’s refreshingly down-to-earth: ‘I’m trying to just be myself and keep doing what I’m doing, and not worry about it. We’ll see how long that lasts before I get slapped on the wrist!’ Fine with us.

Have you been to London before?
‘No, this is my first time. I’ve just been working so I haven’t painted the town. But I’ve always really liked British comedy. I feel like I share the same sensibility: the sarcasm, the dryness. I love Jimmy Carr. He’s hilarious. And Eddie Izzard.’

‘Trainwreck’ is based on your own experiences in your twenties. Was that cathartic?
‘Totally. You feel very vulnerable, but it feels good to be really taking a look at yourself and figuring stuff out. There was definitely some pain involved in writing it. In some of the scenes – the ones where I’m fighting with my sister, fighting with my father, it was hard because that kind of anger comes from pain.’

Tilda Swinton plays a bitchy boss magazine editor. She’s brilliant, and completely unrecognisable. What made you think of her?
‘She’s amazing. I wrote the character and described her as “Tilda Swinton waiting at a baggage claim” because I saw Tilda once at a baggage claim and I couldn’t take my eyes off her. She’s so powerful, she changes the energy in the room. We hit it off like crazy. When she was done shooting I cried. I was like, “I’m gonna miss you!” I think we’ll be in each others’ lives from now on.’

‘I never write back a troll,
but I sometimes correct their English’

You’re known for the odd prank, like your pratfall on the red carpet in front of Kim and Kanye. Do you plan these things?
‘No. That was totally spontaneous. The opportunity just presented itself. They looked so fierce and they were so in their element, I just wanted to ruin it. I thought it would be funny. Like, why are we treating you guys like royalty? It’s just such a weird thing.’

You’re on Twitter and Instagram. Do you find social media empowering?
‘Yeah. It’s a way to have control over your own image and what people are experiencing of you and to get feedback on a joke pretty quickly. I don’t have too many tweets I regret.’

The other side of social media is the trolling. Is that a problem for you?
‘I don’t get it that bad. I maybe get two cruel things a day. The insults are almost always misspelled which I really like. I never write back a troll, but I sometimes correct their English.’

You’ve become a poster-girl for feminism. Are you okay with being a role model?
‘I didn’t set out to become a role model but I accept it and I’m thrilled about it and I think these women are in good hands because I know my intentions. I do think that I’m a good role model, believe it or not. I’m grateful for the opportunity.’

Last question. Who’s the funniest person you know?
‘My sister. She’s really funny. We live pretty honestly – to a fault. I think some people are relieved when we’re out of the room. Also, because we grew up in the same household, she just knows what noise to make or what face to make that will just make me die laughing. She totally inspires me and I really care what she thinks about me so part of living in a way that I’m proud of is how I’m reflected in her eyes.’

Read our review of ‘Trainwreck’ 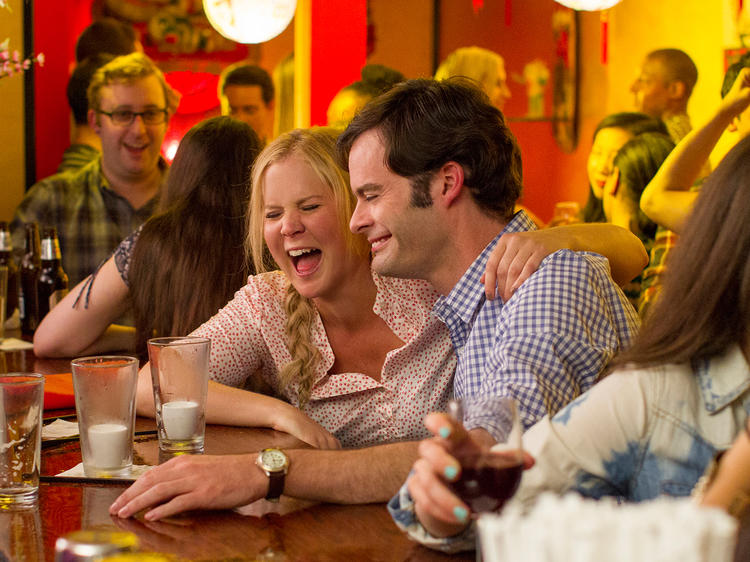