Cara Delevingne on ‘The Face of an Angel’, ignoring haters and maintaining those eyebrows

Forget about those cross-eyed selfies on Instagram. Cara Delevingne is one of the smartest actresses around. Yes, actress

Things you probably know about Cara Delevingne. 1. She has the world’s most famous eyebrows. 2. She has a lineage where most of us have families. (The Daily Mail called her ‘pure Chelsea posh’.) 3. She is the supermodel who built her brand on 2.2 million Twitter followers and having fun with her supermodel besties. 4. She invented the boss-eyed selfie. Now add point number five to the list: she can act.

No smirking. She’s brilliant in the new British drama ‘The Face of an Angel’. And the acting came before modelling. At 17, she was close to landing the lead in ‘Alice in Wonderland’ (so close that she met with director Tim Burton) while boarding at boho public school Bedales. Then she was spotted by the woman who discovered Kate Moss and the rest is supermodel history. Michael Winterbottom, director of ‘The Face of an Angel’, calls her a ‘screen natural’: ‘After I met Cara for five minutes, I knew she was perfect.’

The film is not – as has been reported – ‘the Amanda Knox movie’. Instead, it explores how high-profile trials like Knox’s descend into popularity contests. Daniel Brühl plays a film director who wants to make a movie about a similar case. Cara plays happy-go-lucky English student Melanie, who’s in Italy for a year and acts as his guide.

I’ve got to admit, I’m feeling schoolgirl nervous before the interview. It’s like being put in a room with the coolest girl in class. But Cara is as open in person as she is on Twitter, a likeable mix of goofy, thoughtful and chatty. And she is Emma Thompson-articulate about issues that she cares about. ‘I’m 15 going on 32,’ she has said – which pretty much nails it. And she’s got one thing money can’t buy and publicists can’t fake: personality. Cara Delevingne is a woman with opinions and not afraid to shout about them. Is Hollywood ready for her?

Your character in ‘The Face of an Angel’ is all energy and positivity. Would you say there’s a bit of you in Melanie?
‘Definitely. She’s more positive than me. Just because I have a lot more to worry about. Not in a bad sense, but she’s on her first adventure after school. She’s gone to Italy by herself to be a student, making friends and getting a job. That’s probably the least worry she’s ever going to have. But I am that way. I always try and have fun.’

Is it weird having this huge success so young, when your mates are only just starting their careers?
‘Yes, definitely weird. I always wanted to go to drama school. But I thought I was going to be the one stuck on a gap year for two years, lost in India. I never thought about the future. I’ve only started thinking about it in the last six months, purely because I’m doing a film till September and then another one next year. All I knew was that I wanted to act and I wanted to do music.’

Do you care if people bitch about your transition from modelling to acting?
‘No. As soon as I got my first role I was like: Fuck it, I don’t care what people say. The work speaks for itself. People can call me whatever they want, and put me in whatever category. I just hope I can do good work and make good movies with people who inspire me. But it’s been pretty terrifying. It hasn’t been chilled.’

Did you ever think: I’ve done too much modelling, it will be impossible to become an actor?
‘Oh yeah. The first time I did Fashion Week, I was like: Right, I might as well give up on acting because I’m screwed. And as soon as I became a model, I was being sent typecasting roles as the stupid blonde who gets killed really quickly, or the sexy girlfriend, or whatever. Roles I would rather die than play. I was ready to give up on it. Or not give up, but take a break. When I finally got a serious role to audition for, I cried on the phone, I was so happy. Not even a film, just an audition.’

So it’s difficult as a woman in your twenties to get decent roles?
‘Yes. And every movie I’ve done I’ve had to fight for lines and fight for point of view. Usually it’s a male director, male producers. It’s all very much a man’s point of view. I speak up and say “Girls don’t do that.” Or “That’s not something a girl would say in that situation.” It’s about how men perceive women and it’s not accurate, and it annoys me! I don’t think people speak up enough. Even if I’m wrong, even if I get shut down, I know that I’ve done my part to get a woman’s voice out there. It’s important that when girls watch movies they’ve got strong female role models.’

What kind of roles are you being drawn to?
‘Right now I’m playing a supervillain [in comic book movie ‘Suicide Squad’]. I don’t want to take roles that don’t make me want to cry or don’t inspire me. I want to feel that I would pay a lot of money to play the role that I’m playing.’

You’re the social media supermodel. You’ve got 2 million followers on Twitter and 10 million on Instagram. Do you ever feel like just turning it all off and becoming a recluse?
‘Oh yeah. Not that I ever will. People comment on the way I look or they think that I’m doing something that I’m not. People hear rumours and they comment on them. And I have no control over it. Sometimes I get sad and think: God, I can’t ever turn back from this. I can’t switch it off. There is no return. And it freaks me out. But at the same time, I wouldn’t be living any other life. And to be honest, I don’t care what they think. I’m happy.’

You covered yourself in fruit to celebrate getting 10 million Instagram followers. What will you do when you hit 20 million?
‘That’s a good question! I’ve no idea. What am I going to do? Shit. Skydive!’

Do you enjoy living out of a suitcase?
‘No! At the moment I’m sitting in a hotel room with three suitcases. I used to pack like a messy teenager, shoving everything in. But now it’s like a ritual. I spend a couple of hours, music on, putting everything in piles. I never loved being organised until now.’

You went to boarding school. Does that prepare you for a nomadic life?
‘Definitely. It taught me a lot of self-discipline, because I went to a boarding school where they didn’t tell you when to tidy your room or do your homework. You had to figure that out for yourself.’

What were you like at school?
‘I’m more of a nerd than people think I am. I was always in the music room or doing plays. And I liked filming. I had an old Apple laptop that I connected a camera to, and I would go around making videos all the time. And I was pretty naughty, running around playing pranks.’

At Paris Fashion Week you only walked one show, Chanel. Are you retiring from modelling?
‘No, I don’t like the word retiring. I would never retire. I want to be able to do everything. I’m taking a break. I wasn’t going to do any shows, but I love Chanel. I’d do anything for Karl. He’s a genius.’

You can act. Any more hidden talents?
‘No, my talents are all out.’

What power would your superhero have?
‘To be able to morph into anyone or anything.’

What are you reading at the moment?
‘I’ve just finished reading Lena Dunham’s book [‘Not That Kind of Girl’], which is good. And I’m re-reading Herman Hesse at the moment – his poetry. And short stories by an amazing woman called Lydia Davis. My attention span is tiny when I’m working, so I like to read a short story.’

Joan Collins is your godmother. Is she good at it?
‘She’s the best godmother ever. She gave me truly great advice about being an actress. She was the one who told me I didn’t have to go to drama school.’

What’s the secret to your eyebrows?
‘If I’m about to get a monobrow, I pluck them; but otherwise I don’t touch them. That’s my grandmother’s secret.’

‘The Face of an Angel’ opens in UK cinemas on Fri Mar 27.

Read our ‘Face of an Angel’ review 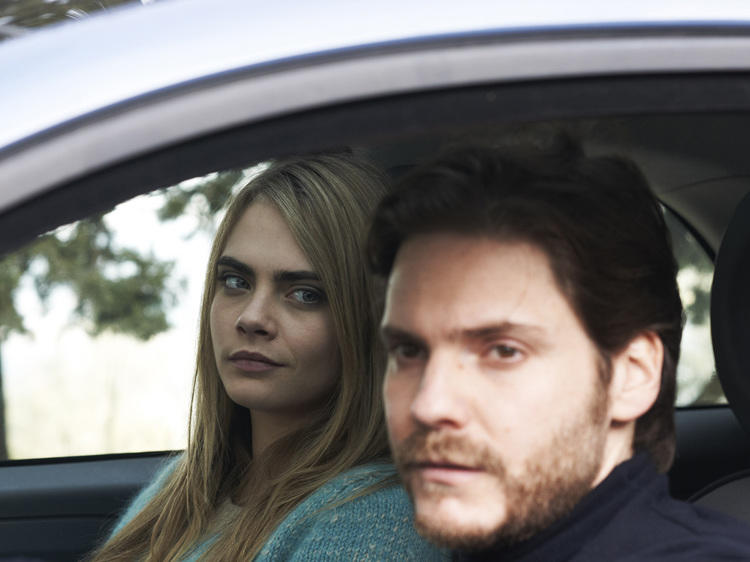 The Face of an Angel

The film’s layered, enquiring, half-formed and unknowing vibe feels fitting in the context of a tragic real-life story that has inspired all sorts of hysteria and unfounded opinion.