Daniel Kokotajlo: ‘I had no interest in dealing with my time as a Jehovah’s Witness’

At 37, Manchester-born, London-based Daniel Kokotajlo has delivered a belated but belting debut in the shape of Jehovah’s Witness drama ‘Apostasy’. Kokotajlo (it’s pronounced ‘cock-a-tay-low’) was a Witness until his early twenties, so it’s been a personal odyssey for him. Improbably, he also used to be a hip hop B-boy. We asked him about both.

Have you had any reaction to the film from the Jehovah’s Witnesses?
‘I heard that someone from the church’s governing body was reviewing the film, but I never heard how they felt about it. But at every screening there have been groups of ex-Witnesses turning up. A lot of them have been through pretty horrific break-ups from the religion, so it’s cathartic for them.’

Can you tell me how you parlayed your own experiences into a movie – and why you wanted to?
‘I was a Witness and for a long time after I left the religion, I had no interest in dealing with it. I didn’t want to open that can of worms: maybe I didn’t want to upset people and I was a bit afraid of talking about that stuff. It took me a while to feel comfortable.’

How old were you when you left?
‘21, 22. I think. I’m 37 now. I spent a long time dealing with all that stuff and then I closed the door on it and it was only later when I got into filmmaking and I was trying to work out what stories to tell that this became something that people seemed interested in. I had to revisit all that. There was an additional pressure as a first-time filmmaker: obviously it’s hard anyway but this was dealing with very personal issues and I felt pressure to be honest and even-handed so as not to upset people.’

That must have been a lot to deal with, psychologically and emotionally.
‘Yeah. I’d say so, yeah. In a way, I’d not really dealt with it properly until I did this film. I ended up doing a lot more research for this film and finding out things that I had no idea about before.’

Can you give an example?
‘Well, recently there’s been all that stuff about child abuse and paedophilia within the religion, which is upsetting – and reading stats on how many people do die from not taking blood. And how Witnesses come up with the rules, as well. They’ve changed their stance over the years on how much blood you can take – different fractions – and how they’ve changed their prophecies on when the world was going to end. As a Witness, I didn’t know about any of that. They kept it quiet. We were all looking forward to the new system coming. The prophecy at the time was that people born before 1914 were going to see the new system, so they were getting pretty old by that point so we felt like it was going to come soon. Then, of course, it never did so they changed it.

It’s weird, the film I saw immediately before ‘Apostasy’...
‘Don’t tell me. “The Children Act”? Fuck!’

But there haven’t been many films about Jehovah’s Witnesses, which must speak to an organisation that prizes secrecy.
‘You’re right – and especially not [made by] a Witness. For a while, we thought it was the first English-speaking film on the Witnesses but I discovered that there is a British film from the ’60s by Basil Dearden called “Life for Ruth” and it’s very similar to “The Children Act”. It’s about a doctor trying to fight the parents to give a child a transfusion. They don’t say that they’re witnesses in it, but it’s clear that they are. But this is different from “The Children Act” because I was a Witness and the details are from my own life and it’s from the Witnesses’ point of view.’

In the film, the Kingdom Hall has a PA rigged up in the loo so there’s no escape from the message. Does that really happen?
‘Yeah, they do that [laughs]. You can’t even have a shit in peace. That was the key thing for me about the Witnesses: there’s not so much humour in it; it’s a bit darker and more sinister. In that scene, you hear the elder saying: “If this book looks green but God says it’s red, then it’s red.” It’s Orwellian.’

Is it true that your mum is a Witness and she didn’t know you were making the movie?
‘I don’t think she did. I didn’t tell anyone about it because I didn’t want to upset anyone. I wasn’t lying about but I kept it a bit of a secret. I did admit it to her and she seemed okay with it, although she’s not seen the film yet. We’ll wait and see how she reacts. It’s tricky stuff to talk about.’

Have you always loved films and filmmaking?
‘I made a living after leaving uni by selling paintings, but I was also making music at the time and living with the guy who owned my record label. He had a huge collection of British films and that’s where I first discovered that there is a British cinema history. We sampled those films – Anthony Asquith and David Lean – in our music. We made a mixtape called “Three Sinister Syllables” which was this cut-and-paste, beat-based thing filled with British film samples.’

So you used to be a film-loving B-boy?
‘Oh God, I was, yeah. I made hip hop under the name Chopps Derby. Am I on YouTube? Yeah. Luckily it doesn’t come up on Google any more!’ 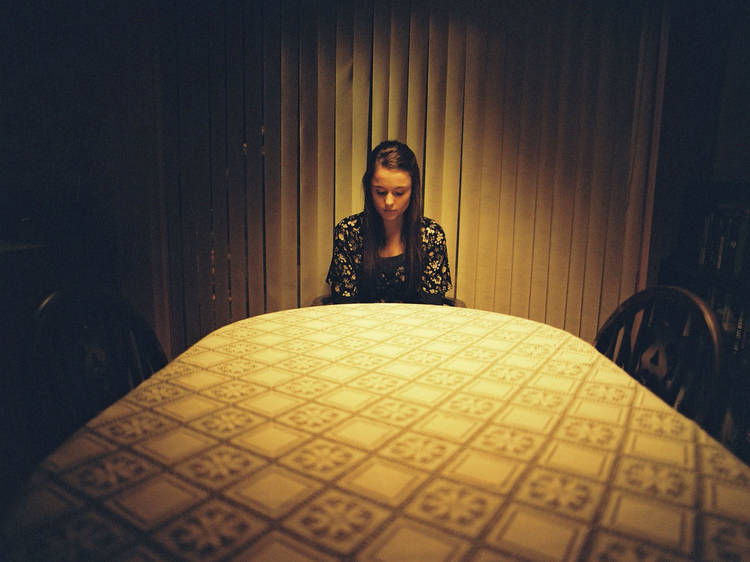