Denzel Washington on acting in sequels: “It can’t be ‘Malcom X 2’’

Denzel Washington talks ‘The Equalizer 2,’ Spike Lee and why you haven’t seen him in sequels until now

Denzel Washington has somehow eluded parts in superhero franchises, but the magnetic leading man makes a natural avenger—“I saw Black Panther. I liked it. You know, Wakanda forever, man,” he says. Ahem, that’s small “a” avenger: In The Equalizer 2, Washington’s fourth collaboration with director Antoine Fuqua, he returns to the role of hard-hitting anti-hero Robert McCall. A widowed everyman with Batman’s investigative eye and Luke Cage’s conversation-ending fists, McCall resurrects his incognito black ops past in a revenge-driven quest that starts with Washington stepping into the most mundane of side hustles: working as a driver for Lyft.

Is there a secret cut of The Equalizer 2 that’s two hours of you picking up passengers?
We should’ve done one of those reality shows where the guy’s driving and—Cash Cab, is that what it is? We should’ve done a version of that where I just go out and pick people up.

Director Antoine Fuqua refers to your character Robert McCall as a “dark angel.” Have you ever been that angel to anyone in real life?
You mean did I go out and kill some people? Beat up the crowd?

No, no. More that McCall sees a problem and he addresses it in his way.
There’s a joy in helping someone without them knowing it and they’re like, wow, how did that happen? You never know who you’ve touched.

Some of his physicality is quite ruthless, but we as the audience—
You cheer for him. You want that.

How do you make sure that the audience stays on his side?
I don’t worry about that. What would I do about that anyway? Let me act nice so they’ll like me before I go snap these 47 necks. [McCall is] a guy who looks out for people, he cares. There’s something sad—there’s some shots where you see him thinking and you think, man, this guy, he needs a hug. He needs some friends. He’s stuck somehow. We all can relate to that.

The first Equalizer movie has a centerpiece action sequence in a hardware store. Has that changed your hardware shopping experience at all?
No. [But] you know what was cool about the first go around, is that we had our own giant department store that was actually a set. So I used to steal candy. On the way out each day you’d cut through the cash registers and all the candy. I said, this was dangerous, all this free stuff.

This is notably the first sequel you’ve acted in. Why this one?
There hasn’t been a lot of sequel kind of material. One that they were working on was Safe House. I mean, it has to be the right; it can’t be Malcom X 2… Glory: The Next War.

Are there any roles you’ve had that you’d love to be able to step back into?
I don’t look back. I just did The Iceman Cometh on Broadway. I just did it. I’m not looking to step into it again. I’m looking for the new challenge now.

If Malcolm X were being made today, how do you think today’s politics would factor into your portrayal of him?
Who’s the filmmaker?

Let’s say Spike Lee still.
Then it wouldn’t matter a bit. Because he’s going to do whatever he wants to do. Forget today’s politics: He didn’t care then, he don’t care know. [Laughs.] Spike, shit, we were worrying about getting killed. You’re talking about politics, we were trying to stay alive.

On the set?
We won’t talk about it. Let’s put it this way: We were stepping on some serious toes. And I’m not just talking about the studio. Ba dum… tss.

You previously worked on five movies with Tony Scott. What are some of your favorite memories from those collaborations?
Tony was a really sweet guy. Tough as nails, cursed like a sailor, but he’d cry at the drop of a hat. And there were certain scenes we did in those movies—and I just think of Man on Fire—where we’d just make him tear up. And he’d cut, and I’d say “You alright, Tony?” And he’s like, “Yeah, it’s good. Good.” He was a sweetheart, just a sweet, sweet guy.

Are you ever overwhelmed with emotion as a director?
I can tell you this—and I knew when I hired her—Viola Davis had a small role in my first film that I directed, Antwone Fisher, and she didn’t even speak, and she was killing. So I’m thinking, as a young director, I probably need to go say something to her just to make her feel good, but I really don’t want to bother her because she’s killing it. Just a great, great actor.

What young actors excite you today?
My son [John David Washington]. He’s very good. BlacKkKlansman, the Spike Lee movie, he’s getting some serious notices. And he’s got the gift. I’m really excited by the young filmmakers I see [like Barry Jenkins], which will give all the young actors an opportunity. 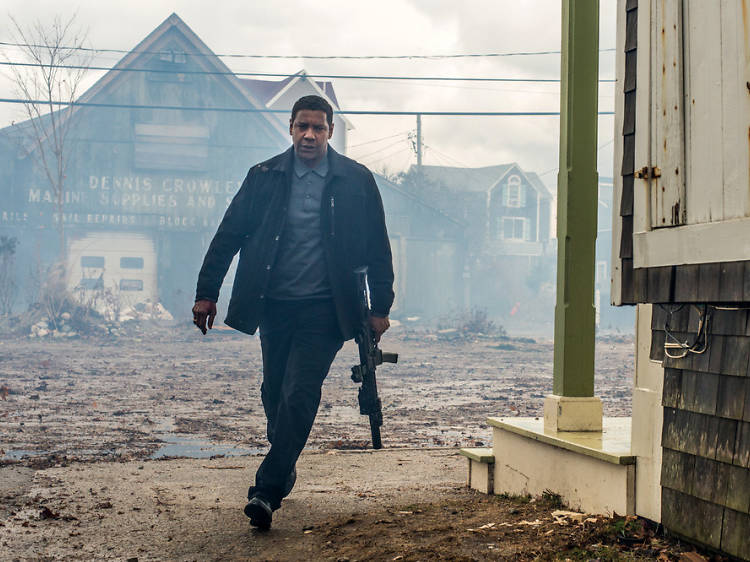