Emilia Clarke on ‘Me Before You’, ‘Game of Thrones’ and getting naked onscreen

You might not recognise Emilia Clarke. The 29-year-old is best known for playing the ethereal Daenerys Targaryen in ‘Game of Thrones’. A powerful queen with three enemy-charring dragons at her side, Daenerys is one of the show’s strongest contenders for the Iron Throne. She also has trademark long, icy blonde locks. In real life, Clarke is more girl-next-door than Mother of Dragons. She chortles like she’s three glasses of red wine down at a dinner party. She’s as unfiltered as Jennifer Lawrence and her brunette bob is more reminiscent of a beauty YouTuber than a dynasty-saving khaleesi. ‘I’m so unrecognisable that people don’t clock me,’ she laughs as we chat at the Soho Hotel. ‘It means I’ve been able to stay super-normal amid the craziness of “Game of Thrones”, but then sometimes when you’re trying to chat up a cute boy at an awards party…’

She won’t need to name-drop Daenerys to chat up lads much longer. This summer Clarke’s ditching the platinum wig to star in romcom movie of the year ‘Me Before You’, a weepy based on a novel by Jojo Moyes that has sold more than five million copies worldwide. It follows a quirky homebody carer Louisa Clark, played by Clarke, whose worldview is transformed when she starts looking after angry quadriplegic millionaire William Traynor (Sam Claflin). Basically, it’s 2016’s ‘P.S. I Love You’ or ‘One Day’.

Clarke says she was sent the book while playing Sarah Connor in the recent ‘Terminator’ reboot and read it on set. ‘I was there holding my grenade launcher, crying “I need to play this part!” ’ she says. ‘It’s the closest to me I’ve ever read in my entire life. And she’s got my surname!’

Aside from your surnames, how are you and your character, Louisa Clark, similar?

‘I’m goofy like her. At dinner, I’ll try and crack jokes at inappropriate moments and I love karaoke. I like a good rap, so I often do “Whatta Man” by Salt ’n’ Pepa. Or, weirdly, The Libertines is really good because you can just shout it. I try and do Adele, and people are like: “Emilia – no!” ’

Both Louisa and Daenerys Targaryen go on journeys from naivety to strength. Do you go for characters with that arc?

‘It’s not so much that I look for them. It’s just that the sort of roles I’ve gone up for since “Game of Thrones” have been women with a backbone. Daenerys and Sarah Connor from “Terminator” are powerful women because they wield guns and kill people, but strength is so much about what it means to you personally. Me waking up in the morning and doing something that makes me feel strong is not the same as a girl in my home village waking up and doing something that she thinks is strong.’

Another thing about Louisa in ‘Me Before You’ is that she’s not sexy in the traditional sense. Did that appeal to you?

‘It’s weird. When people say you’re the sexiest woman alive or whatever, you’re like “Yeah but we don’t need to talk about it.” It’s nice, but I wish so much that I could be like Beyoncé and go: “Dayuuuum straight, check out my booty.” But I can’t because it’s not who I am.’ 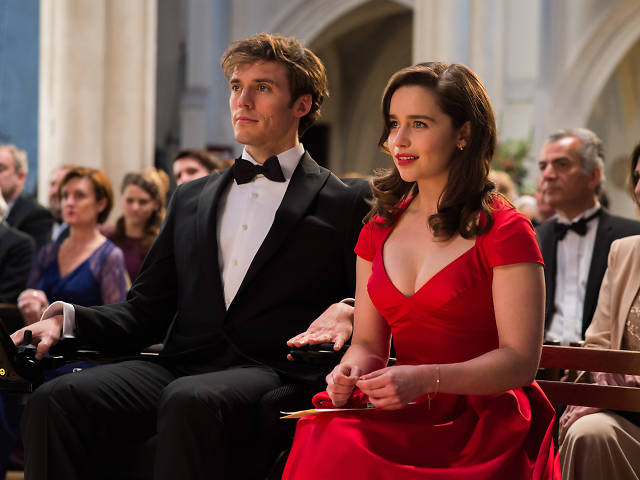 You turned down the part of Anastasia in ‘Fifty Shades of Grey’. Are you glad you did?

‘I am. For better or worse, people love to talk about me being naked. That’s the one thing that grinds my gears. It only happened in “Game of Thrones” a couple of times, because it was part of the plot. I don’t walk around naked all the time. I definitely wouldn’t say I won’t do nudity again because there’s loads in life. Being naked is not something that defines me, but at that point it was the only question people asked.’

Do you get bored of being asked about the moral implications of being naked in a film or TV show?

Is being naked as a woman on screen empowering?

‘Game of Thrones’ recently had a penis close-up. Will there be more?

‘There should be. I’ve not seen every episode so I can’t tell you how many naked men there are in the other episodes. There’s more fighting than nakedness in this season. But male nakedness is something we’re encouraging. The board of “Game of Thrones” have decided we need more cock.'

Has the wig stopped you getting pigeonholed as Daenerys?

‘Yeah, I go into meetings and they’re like: “Oh, you can play something else.” It was so wonderful getting to do “Me Before You” because it’s joyous and light and fun – and I hadn’t got to do that yet. If someone asked me what I want out of my career, variety is absolutely the key. Not so I won’t be pigeonholed, but just so I don’t get bored.’

What are the things that push you out of your comfort zone?

‘It used to be scary going to LA. Walking into the afterparty of an awards ceremony and feeling: No one knows who I am, especially without the wig, and I’m shit-scared… “Hello, Leonardo DiCaprio!”’

Have you ever spoken to Leo?

‘I can’t! I keep ending up really close to him at events and I just can’t say hello. It’s too much. I’ve loved him so much since seeing “Titanic” when I was 11. I just need to breathe the same air as him. That’s all I can manage.’

‘It’s amazing when I get to do amazing things and share them with my mates who aren’t famous. I brought my best mate Mike with me to LA. He walks into this party and goes “J-Lo is on the dancefloor, dancing.” I’m like, “I can embarrass me, but you can’t embarrass me – so no, you can’t grind up on J-Lo, she won’t appreciate it.” ’

Do you have an awards season squad?

‘Not really. I wish I could be Taylor Swift. I met her and she was like, “I’m really starstruck!” I just thought: What? You’re Taylor fucking Swift. What are you talking about? We were chatting a little bit and in my mind I just wanted to ask “Does this mean I’m in your squad?” ’

If you could have any other role in any cult TV show, what would it be?

‘I’d play Ben Whishaw’s character in “London Spy”. Or, oh my God, I promise you I have really good taste in TV shows but for a while I was obsessed with “Empire”. I’d want to be Cookie. She’s amazing!’

‘No one knows who I am without the wig’ 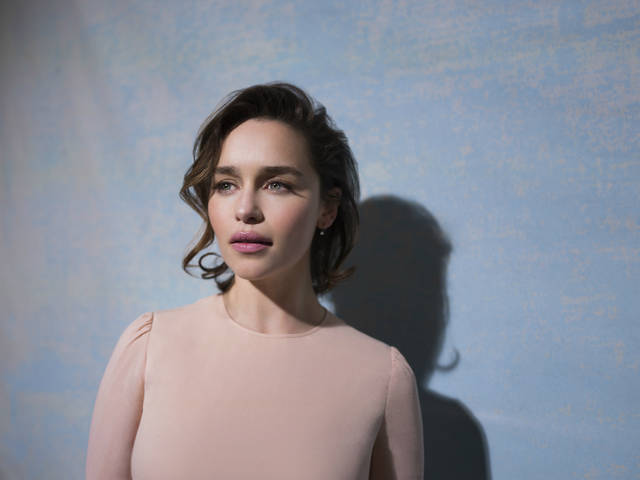 She does musical numbers too, so you could do your Adele.

‘Exactly! I could bring it out.’

Was it nice to be back working on a British film?

‘It was amazing! Getting to go home to my own bed every night? That’s a rarity in my career that I relished on “Me Before You”. And getting to the local pub before closing time!’

You were born in Wandsworth but grew up in Buckinghamshire. So are you a proper Home Counties girl?

Did you own any Jack Wills?

‘I really wanted to get Jack Wills trackie bums, but my mum banned me. She said: “They’re not cool. You’ll wear clothes, dammit!” And Hollister – my mum was like, “I’m not going into that black box with all the music.” ’

You worked in a bar in Hackney before 'Game of Thrones'. Was that pre-hipsterisation?

‘Hackney’s always been cool, but I lived in Dalston before it became Oxford Street. Hackney was coming up then, for sure. I can’t remember the name of the pub I worked in but it was a dead trendy one.’

‘Drunks, definitely! My usual line was “I’m young enough to be your daughter – walk away.”’

Did you have a hip Dalston wardrobe?

‘When I first moved there, I walked down the street with my friend and she was like, “Mate, we’re going to have to change how you dress.” I was wearing such fancy clothes. Not fancy clothes, but I didn’t look dirty, and I like wearing a little bit of a heel. When I was living in Dalston, other people were like: “Fucking dress down, sweetheart.”’

Now that you’re back in the capital, what are your favourite things to do?

‘It’s so unoriginal but I love all the Ottolenghis. NOPI is my favourite, so I’m there a lot. Then I love the Curzon, Everyman or Hackney Picturehouse, and I go to the theatre all the time. The Heath and London Fields. It’s all normal and boring. My main joy is walking, though. I walk everywhere.’

What was the last film to make you cry?

‘I get so affected by movies – trait of an actor – so it means I cry at a lot of movies, but the last one was probably “Big Hero 6”, and that is the God’s honest truth. It’s a movie that will get you out of any bad mood. I watch all the good arty stuff too, I swear. But sometimes you need a cuddly inflatable doctor-bot.’

We’ve just had the mayoral elections. Do you think Daenerys would make a good mayor of London?

‘She would rule it so well. She’d get rid of those damn bikes. She would make people who work in offices finish at lunchtime. Get the pubs open early. Every Friday you’d finish work at 12, even if you worked at Morgan Stanley. Then a bit of killing… only certain people, though.’

Now that Boris is out of the City Hall top job, maybe he could stake his claim on the Iron Throne?

‘He would either kill it like Tyrion and rule, or get fed to dragons in 30 seconds .’ 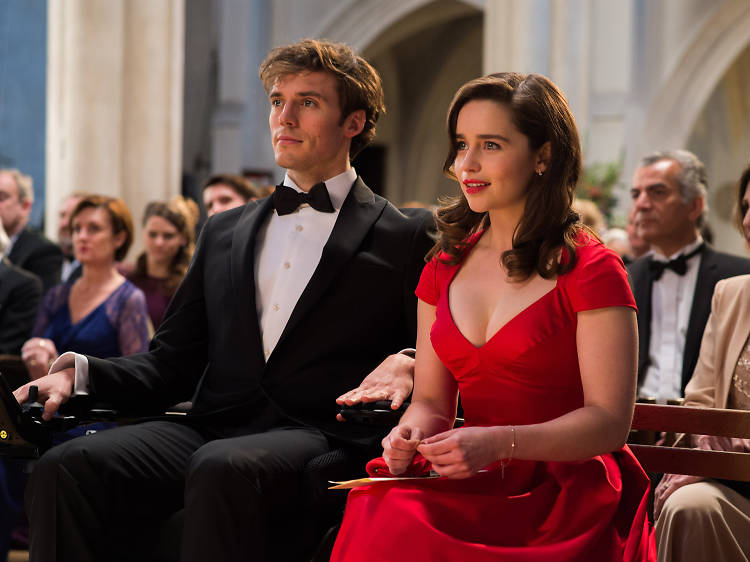 Read our review of the film of Jojo Moyes's bestselling weepie about about a woman hired to be the carer of a quadruplegic millionaire. In cinemas from June 3.