From 'The Hunger Games' to the trenches: Sam Claflin talks 'Journey's End'

The adopted Londoner talks shellshock, Blackadder and the value of a Twitter following

As the buff Finnick Odair in ‘The Hunger Games’, Sam Claflin has past experience of combat, but nothing like the violent crucible of his new film. In ‘Journey’s End’, an adaptation of RC Sherriff’s Great War drama, he swaps that trident for a service revolver as the brave but traumatised and booze-soaked Captain Stanhope.

Did you spend time wondering how you would have coped in the trench?
‘It was impossible not to. As a cast, we liked to think that we had the strength of Paul Bettany’s character, but we decided we’d end up being more like Stanhope. I’ve never seen a dead body in my life, so I don't know how that might change me, especially if it was a best friend.’

You have a lot of young fans from your time on ‘The Hunger Games’. What do you want them to take away from ‘Journey’s End’?
‘I hope people who don't know much about World War I learn what happened there, and want to learn more about servicemen and what they endure. We were fortunate enough to sit with four ex-servicemen who all suffered from PTSD and who shared the obstacles they've had to overcome. It was the most eye-opening few hours I’ve ever had.’

What did you learn that helped with the film?
‘That you spend most of your time trying to survive the waiting. That's the real challenge: when your head starts going places and you start panicking. RC Sheriff originally toyed with calling the play “Waiting” or “Suspense”. It’s about how people react when they’re waiting to die.’

Was it challenging to play an alcoholic?
‘Someone at drama school told me that the key to drunk acting is to not play drunk. There are moments watching the film back where I wince, "Did I go too far there?", but that’s the truth of my character: he doesn’t know when to stop. I had to keep a diary on set so I knew how drunk he was. On “The Riot Club”, all our characters were on drugs or drunk, so we were all finding the atmosphere together, but here it was just me. I almost had to take myself off at times.’

Was there any ‘Blackadder Goes Forth’ quoted on set?
‘I'm a poor excuse for an Englishman, I know, but I've never seen “Blackadder”. But I'm almost certain that between Toby Jones, Stephen Graham, Paul Bettany and Tom Sturridge, someone was quoting it.’

Did you visit the World War I battlefields as research?
‘We were due to, about a week before we started filming. We got as far as King’s Cross, but there was a bomb scare on the Channel Tunnel. That was the only time we were all available. I’d been attached to the film for about a year and a half with another director, then it all went quiet. Then all of a sudden I got a call asking if I minded meeting [director] Saul Dibb. It all came together so quickly in the end. Everyone loved the characters and the thought of working together.’

When you see Boris Johnson et al on TV, do your thoughts ever turn back to ‘The Riot Club’?
‘Politics is farcical, it’s a comedy. I just can’t take it seriously. We’re not in as bad shape as the Americans, but those people are running the country. It’s insane.’

What’s been the legacy of ‘The Hunger Games’ for you?
‘I have a day every month when, for whatever reason, every five seconds it’s “Sam! Sam!” and then it won’t happen again for a month. I’ve never been the papped type – I don’t hang out where the paps hang out. I live in suburban London.’

You grew up in East Anglia. Do you feel like an honorary Londoner now?
‘I do. I’ve been here a third of my life, so I do feel like a Londoner – specifically, a West Londoner. Even as a kid, I knew I wanted to live here. I’m so very happy, I don’t see myself leaving anytime soon.’

So no plans to move to LA?
‘I don’t think so, no. We love it there and every time we go there we kinda go, “Oh, maybe we should try it.” We have a lot of friends out there and we love the sunshine and our little boy loves it out there, but our lives are here really.’

'Journey's End' is out now in cinemas 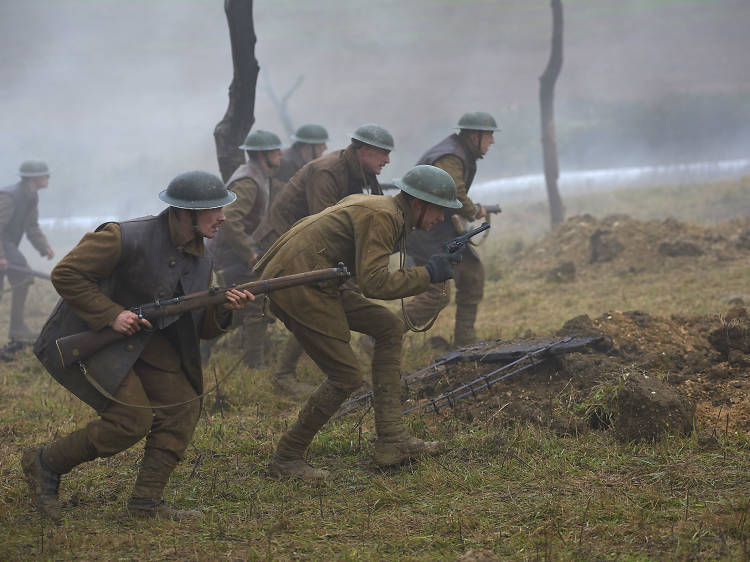