Hayao Miyazaki’s new film ‘The Wind Rises’ comes to cinemas this month and marks the retirement of the 73-year-old director of ‘Howl’s Moving Castle’, ‘Spirited Away’ and other highlights of recent Japanese animation. On the surface, Miyazaki’s films seem fantastical and fun – but behind them you’ll find a man unafraid to make enemies. Here are ten people and institutions that Miyazaki has been unafraid to criticise or alienate. Go Hayao!

If you ask Miyazaki, the anime industry is going to the dogs – and the geeks are to blame. In an interview given just after his retirement in 2013 he took a swipe at Japan’s otaku (nerdy types who obsess over manga and Nintendo games), arguing that they make poor animators because they spend too much time watching anime instead of observing real people. Given that otaku literally means ‘your house’ – a reference to where they spend the bulk of their time – he has a point. Still, don’t bite the hand that feeds you…

A wholesome ten-year-old girl ends up trapped inside a magical bathhouse populated by exotic creatures, and has to ‘grow up’ before she can escape. On closer inspection, one can draw many parallels between 2001’s ‘Spirited Away’ and the sex industry: Yubaba the madam, No Face the insistent customer, Chihiro the young ingenue forced to sell her name and work against her will. Chuck in some spooky cultural references – in the Japanese version, the bath girls are referred to by a word traditionally used to mean ‘escort’ – and you have yourself a blog-friendly conspiracy theory. Except that Miyazaki, the film’s director, has endorsed this interpretation. He said that he wanted to draw attention to the premature sexualisation of girls in Japanese society.

Goro Miyazaki never intended to follow in his father’s footsteps. He studied agriculture and managed to make it as a construction consultant, before being pulled Michael Corleone-style back into the family business. When Miyazaki senior’s plans to direct 2006’s ‘Tales from Earthsea’ fell through, Studio Ghibli’s anxious producer invited Goro to take over the project. A stung Hayao immediately lashed out at his son, claiming he lacked the experience to direct. Goro, for his part, accused his dad of scoring ‘Top points as a director; zero points as a father.’ Judging by the finished film, Hayao was probably right.

Miyazaki has a well-publicised fondness for western children’s literature, taking cues from the likes of Roald Dahl and Diana Wynne Jones in his work. So when he approached Ursula Le Guin with a proposal to adapt her wildly popular ‘Earthsea’ novels, it seemed a good fit. But when Miyazaki abruptly left the project to direct ‘Howl’s Moving Castle’, his son took the helm, things got confused, and the film ended up an incoherent mess. A disappointed Le Guin expressed her regret at ‘the disrespect shown not only to the books but to their readers.’ Guess you can’t Guin ’em all.

A soaring tribute to creative ingenuity, or an underhand endorsement of Imperial Japan’s policies? This, in extreme terms, is the debate encircling Miyazaki’s latest film. ‘The Wind Rises’ is a loose biopic of Jiro Horikoshi, inventor of the Mitsubishi A6M Zero fighter plane, which took a good chunk out of the Allied forces during World War Two – a fact the film doesn’t tackle head-on. Miyazaki has stressed that Horikoshi’s inventions deserve to be admired as feats of engineering. But in Japan’s current climate of gung-ho remilitarisation, this has gone down badly with the left (not to mention some western viewers).

Not content with aggravating the liberals, ‘The Wind Rises’ has actually pulled off the curious one-two of pissing off both sides of the Japanese political spectrum. Right-wingers accuse Miyazaki of shirking his patriotic duty – as if he’s supposed to be some kind of Leni Riefenstahl for the manga generation – by producing a film about a military hero that’s too bogged down in pessimism. No surprises there: in the past the veteran animator has made no secret of his anti-war sentiments. He has publicly denounced the Japanese government for attempting to amend the country’s constitutional ban on armed forces.

Which brings us to Miyazaki’s mysterious no-show at the 2003 Academy Awards, where ‘Spirited Away’ picked up a gong for Best Animated Feature. When the animator ‘pulled a Brando’ and failed to turn up, or even to send an Apache in his place to explain why, rumours abounded that he was boycotting the ceremony to make a stand against America’s involvement in Iraq. Six years later Miyazaki confirmed that this was indeed the case, but that his producer, fearful of negative publicity in America, had hushed him up at the time. Michael Moore, take note: sometimes political statements are best made by omission.

As if antagonising pretty much everyone in politics wasn’t enough, ‘The Wind Rises’ has succeeded in angering yet another group: anti-smoking campaigners, who claim that the numerous scenes of Horikoshi smoking will tempt kids to do the same. While an uproar might have been justified if, say, the Disney team had placed a fag in Aladdin’s mouth, we can’t help but feel that this is a case of confusing anime with children’s cinema, which ‘The Wind Rises’ is not – after all, the same campaigners aren’t so vocal when it comes to live action films ‘for adults’. Then again, there’s no smoke without fire, and the scene in which Horikoshi caresses his tubercular wife with one hand as he holds a ciggy with the other is perhaps one provocation too far.

A notorious Luddite (apparently he didn’t even own a computer until 2008), Miyazaki has poured scorn on everything from fax machines to ‘modern movies’. He famously held off using computer technology for his films until 2001’s ‘Spirited Away’. His latest target? Commuters glued to their iPads: ‘On trains you see more and more people doing that strange masturbation-like gesture,’ he recently lamented, with uncharacteristic salacity. You have to wonder what he makes of a room full of animators furiously applying pencil to paper.

Miyazaki’s films are filled with strong independent females, but he may not be the feminist he’s often described as. Not long after his bout of nerd-bashing, the animator returned to the theme of anime’s decline with a bizarre tweet that seemed to point the finger at women: ‘They say that animation in Japan is done for. When we look to hire new people, almost only women respond, which doesn’t feel right.’ When the inevitable backlash struck, Miyazaki published a five-tweet response that made mystifying references to the prevalence of female bus drivers before conceding that women are faster learners than men. Was he simply trying to say that the pool of male animators – and so animators overall – is shrinking? Either way, this rant won’t have endeared him to many.

‘The Wind Rises’ opens in UK cinemas on May 9.

Watch the ‘The Wind Rises’ trailer 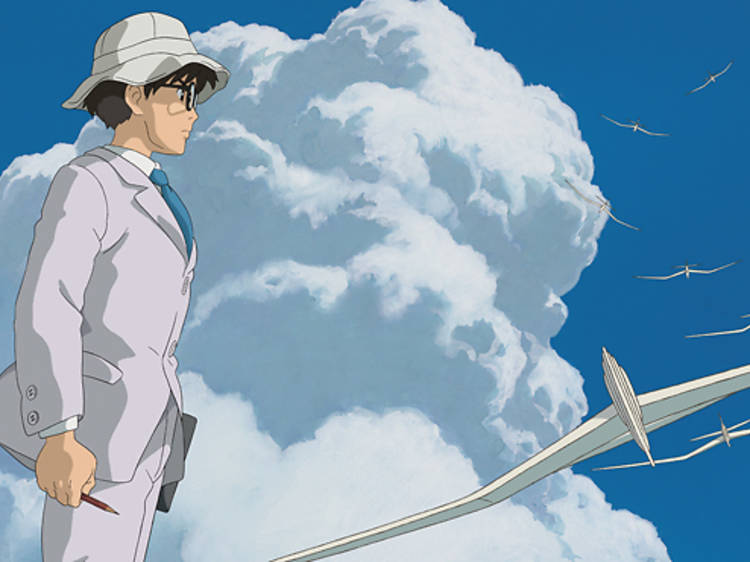 What ‘The Wind Rises’ shares with Miyazaki’s other films is a preoccupation with ageing and the loss of innocence, bolstered by a very Japanese sensitivity to the transience of things. It’s a dark, disturbing, deeply moving full stop to one of the most glittering careers in animation.