'I'd be up for being a baddie’: Ruth Wilson on turning to the dark side

The ‘Dark River’ star talks about sexism, sheep-shearing and wanting to play a supervillain.

When Ruth Wilson got the script for Clio Barnard’s ‘Dark River’, a drama set in Yorkshire farming country, she may not have been expecting to get into the actual river. ‘On a higher-budget film, you’d probably have a tank,’ she laughs. ‘But when the camera’s rolling, you’ve got superhuman powers.’ If you’ve seen ‘The Affair’ or ‘Luther’, you’ll know how often she’s proved that. Raised in the shadow of Shepperton Studios, the actress has built a rep on the big and small screens, as well as the stage. We had a chat over some Yorkshire Tea...

You play Alice, a sheep farmer. How were your shearing skills?
‘I had no skills, so I spent three weeks on a sheep farm. Shearing is a real skill. It was a physical workout every day: running up those hills, chasing sheep.’

What did you connect with in the material?
‘Clio drew me to this film, but it was the physicality, really. I went on a sheepdog training course and there was a red-haired collie who would refuse to look humans in the eyes and was very jumpy. But when she was on the field with the sheep, she was in charge. I thought: Okay, I’m going to base Alice on that sheepdog!’

Alice is a traumatised person and you did research into the psychology of that.
‘I researched psychopaths a lot for “Luther”, but with “Dark River” Clio and I talked to lots of people about intrusive memories, because a lot of this is trauma and PTSD-based. It’s a ghost story in a way, because she’s haunted by her past.’

‘The Affair’ is back soon. Is Season 4 the one where they happily settle down?
[Laughs] ‘Erm… no, come on. It’s a soap opera! Alison finds a bit of happiness but it can’t sustain. She’s continually in a cycle of being with the wrong people.’

Can you spot fans of ‘The Affair’, as opposed to, say, ‘Luther’ fans?
‘It’s middle-aged women, mainly. I’ve been told that they watch it secretly and don’t tell their partner. Isn’t that bizarre?’

It’s a really cool showcase for London. What are your favourite memories?
‘Loads. In the first season, Idris, Warren Brown and I used to do pub crawls to all the Wetherspoons and Yates’s in Islington. There were some hungover mornings. We’re all older now and a bit more boring. It was one of the first shows to showcase London really cinematically – the Barbican gets shot beautifully.’

What inspires you about London?
‘The people, the culture, the architecture. I love walking around my area – Southwark and Waterloo – and there’s so much history there. There’s a prostitutes’ graveyard down on Union Street and people put ribbons on the gates.’

You did ‘The Lone Ranger’ in 2013 but haven’t done a blockbuster since. Has that been a conscious decision or just the way things have panned out?
‘A bit of both. “Lone Ranger” was a phenomenal experience. I was doing a $250m western! It was insane, I had to pinch myself. And I got a Lego figure! I was well happy with that. There have been opportunities to do another, but the parts haven’t been right. They take too long to do too little.’

Has Marvel come knocking?
‘I did have an interview for a Marvel thing ages ago. They wouldn’t say what the part was, so I made a questionnaire for the two directors. “Is she a baddie?” They said she was a bit of both. “Does she wear leather or latex?” They said no. I was like [makes ‘Family Fortunes’ buzzer noise] “EER-EEER!” I said, “How many days filming is it?” They said 14. I said, “14? That’s not very long... EER-EEER!” So I said no. If you want to be in a Marvel movie, you’ve got to be a baddie or a superhero. Just being the girl on the side is boring. I’d be up for being a baddie.’

Ruth Wilson in 'The Affair'

You’re playing your own grandma in a drama you’ve produced for the BBC, ‘The Wilsons’. Is that nerve-racking?
‘Yes. My grandmother had a complicated and wild story. I want to show the good and bad of everyone without placing any judgment on their choices, but you can’t help it when you’re making a drama. It’s scary, but it’s also been a real honour.’

Where are you going to be when it airs?
‘Somewhere with no internet access.’

Do you worry about the lack of decent roles for women, especially as their careers progress?
‘It’s bleak but that’s the reality, that we don’t value age – certainly not with women. But women get so much more interesting and sexy and complicated and funny, as everyone does as they age. Why are we scared of putting that on camera? Frances McDormand or Allison Janney or Isabelle Huppert, they are the best performers by a mile. ’

Is that issue hardwired into Hollywood?
‘Hollywood is funny: it’s a business and they’ve been selling the same thing for a long time. You have to get more women writing and directing so the stories get out there, and you have to have men supporting that. #MeToo and #TimesUp are making everyone reassess how they view the world, and how the patriarchy has dominated and infiltrated everyone’s worldview. Whatever is happening, it’s moving us forward and that’s exciting.’ 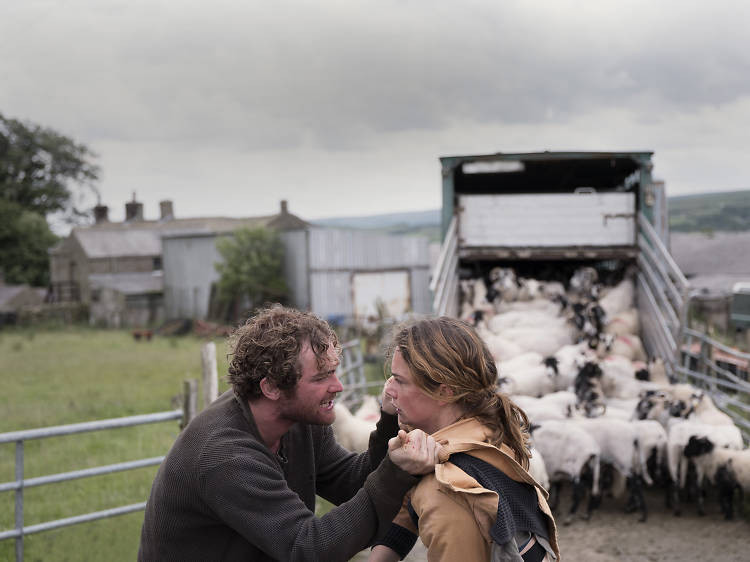