Jake Gyllenhaal has reinvented himself again for ‘Southpaw’, in which he plays a boxing champion whose life disintegrates. Here the ever-versatile actor talks to Time Out about avoiding the Hollywood KO

Could Jake Gyllenhaal be any more relaxed? The 34-year-old is midway through a day of interviews in a London hotel room and is remarkably laid-back for someone who’s spent a day fielding annoying questions. He talks slowly and thoughtfully even chucking a ‘mindfulness’ reference into the conversation at one point.

It’s a different Gyllenhaal from the one in his latest film ‘Southpaw’, in which he plays volatile boxing champion Billy Hope. On the film’s poster he’s unrecognisable: shaved head, tattoos, bulging muscles and popping veins. Gyllenhaal is known for his all-or-nothing approach to acting: for ‘Southpaw’ he  embarked on a six-hour-a-day gym routine and shut himself off from friends and family. He learned to box, and the punches thrown in the film are real.

Gyllenhaal hasn’t followed an obvious path to stardom. Despite his immersion in Hollywood – his first film appearance was aged 11, his parents are both filmmakers, and his sister Maggie has had a successful movie career – he’s favoured more offbeat and challenging roles, from ‘Donnie Darko’ to Oscar-winner ‘Brokeback Mountain’ to last year’s ‘Nightcrawler’. In ‘Southpaw’ he gives a typically committed performance: it’s a grimy and tense film about a fighter trying to rebuild his life after he’s hit by a family tragedy. His ‘method’ approach is visible in the stilted speech patterns and nervous body language of his punch-drunk character. He might be zen in person, but he says of his acting: ‘I take it extraordinarily seriously.’

You really immerse yourself in your roles – is it difficult being so ‘method’ in your approach?
‘I would never call acting difficult: it’s just not comparable to difficult things in the real world. There’s a history to cinema and to film that is to be respected. But it’s all within the realm of sanity. It’s always a challenge, but sometimes it can become absurd!’

Does the process become addictive?
‘I don’t know, I believe that freedom’s the other side of discipline. I’m not sharp enough to just show up and deliver. It takes a lot of preparation. I’ll take anything I can get in order to fill out a character, along with classical technique.’

I have to ask… If you had to go head-to-head with someone in the ring, who would it be?
‘Oh, man, are you kidding? I don’t want to fight anybody! There are fights that I’d like to go back and see, and people that I’d like to see fight each other, but no: I don’t think there’s anybody that I’d really want to fight.’

You’ve tended to steer clear of blockbusters in favour of smaller projects. How do you choose a role? Is it all about the director?
‘Sometimes it is, and sometimes it’s the director, editor, cinematographer, set designers, producers. A movie is never made with just one mind. I try and have the knowledge of every single department, and what they’ve done.’

Would you like to direct?
‘Yes I would. It hasn’t come up yet. It’s starting to, but I see how hard it is, and I see how many people think they can do it. You really have to know what you want to say. And you really have to be very prepared: not just prepared in terms of skill, but as a human, because it takes such patience. I have more to learn, but I’d like to try my hand at it some day.’

You must get a heap of fan mail – are there any letters that have really stuck with you?
‘I have a note someone wrote me on a receipt that a waiter handed to me. It’s about having watched “Brokeback Mountain”. He’d been in the closet and had come out to his parents, and wanted to thank me for making the movie. You can say to yourself that the job that you do as an actor is absurd, you can easily roll your eyes at it, but then someone says that to you and you think: Oh, wait!’

Your sister Maggie recently spoke out about ageism in Hollywood: she was told she was too old to play the lover of a 55-year-old. Have you observed this kind of prejudice yourself?
‘I agree with my sister. I’ve seen it happen and not just with actors. In the movie industry there’s a tendency to go with the newest thing because it seems like it has a sense of perfection, you know: no flaws. But in fact I think we can learn from our elders. Everything I’ve learned and been inspired by has come from people who have been through so much more than I’ve been through. I think if the business echoed that it would be a wonderful thing, and movies would be a lot more interesting.’

‘Southpaw’ is in cinemas from Fri Jul 24

Read our review of ‘Southpaw’ 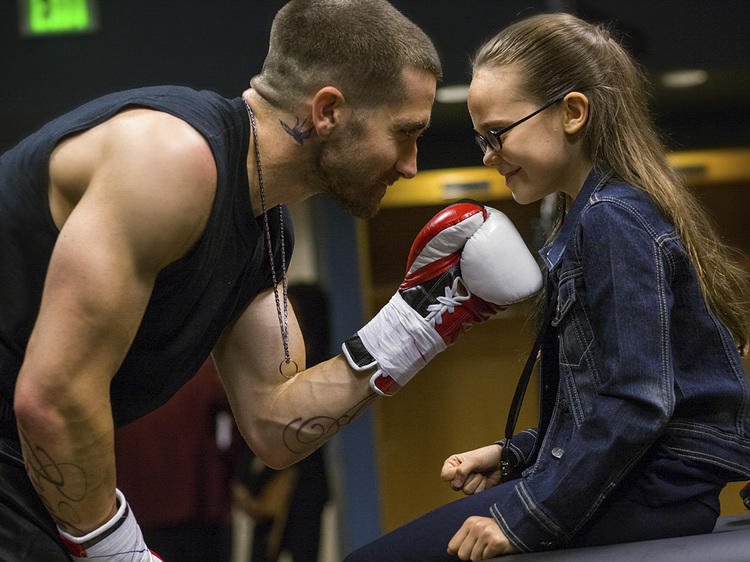 Like a ‘Raging Bull’ that’s been punched one too many times in the head, Antoine Fuqua’s boxing melodrama is so loaded with obviousness, there’s more pained groaning from the audience than from the guys in the ring. Jake Gyllenhaal is Billy Hope, an inspiration to fans, transcending his tough upbringing in New York’s Hell’s Kitchen to claim a light-heavyweight title, a lovely, devoted wife (Rachel McAdams) and a luxurious home. This is all speedily taken away from him, when an accidental gunshot turns Billy into drug-abusing widower, with his young daughter placed in protective custody.