Joel and Ethan Coen interview: ‘Why are we successful? Who knows!’

With ‘Inside Llewyn Davis’, the men behind ‘The Big Lebowski’ and ‘Fargo’ are taking us back to New York’s 1960s folk scene

This year marks three decades since the Minneapolis-born brothers Joel and Ethan Coen started making movies. They’re now 59 and 56 respectively, and since writing and directing the taut and bloody noir ‘Blood Simple’ in 1984, they’ve applied their wry, borderline-black worldview to stories as diverse as ‘Fargo’, ‘O Brother, Where Art Thou?’ and ‘No Country for Old Men’. Dry humour is a major ingredient in their work, often served up to their characters with a slap in the face from fate.

That’s especially true of their new film, ‘Inside Llewyn Davis’. It’s an insight into New York’s 1960s folk scene, which combines the brothers’ love of music with their fondness for melancholy and flawed characters. The soundtrack is as seductive as the film: producer T Bone Burnett worked with the cast to ensure their musical performances were as credible as their acting.

The film lets us in on one wintry week in the life of a fictional musician on the folk scene in Greenwich Village in 1961. Moody and bitter, Llewyn Davis (newcomer Oscar Isaac) is talented but going nowhere. The Coens took inspiration from ‘The Mayor of MacDougal Street’, the memoir of little-known folk singer Dave Van Ronk, although all their characters are made up. Apart from one: at the end of the film we get a fleeting view of an actor playing the young Bob Dylan.

Were you fans of the music scene in the film?
Ethan Coen: ‘Yeah, a large part of how we came to write it was out of enthusiasm for the music.’
Joel Coen: ‘We listen to a lot of American music, and this is really a revival or a rediscovery of the music in “O Brother, Where Art Thou?” by a different generation. This early ’60s music led to other music we’ve always been into from the period that follows it – the singer-songwriter stuff and rock ’n’ roll. It’s always been a part of our life and upbringing and cultural experience.’

Are you throwing light on a lesser-known scene?
JC: ‘Yes, particularly what Dave Van Ronk called the “great folk scare”, which was this period in the late 1950s and early 1960s when this folk revival was taking place. It was principally in Greenwich Village but also in Chicago, San Francisco and Cambridge, Massachusetts. That sort of early American roots music was being rediscovered and played by college kids and kids who would come in from the boroughs and gather in Washington Square. That was interesting and people don’t know so much about that scene – the scene that Bob Dylan came into.’

Llewyn, your main character in ‘Inside Llewyn Davis’, has one hell of a week…
EC: ‘That could have been the name of the movie! “A Hell of a Week!”’

He’s seriously talented. But he doesn’t do himself any favours. Was that key? That we believe he’s actually got talent?
EC: ‘Crucial.’
JC: ‘It was the starting point of the whole idea of the movie.’
EC: ‘He’s not getting anywhere, but it wouldn’t be interesting if he was lousy.’
JC: ‘Someone being a failure because they’re lousy at what they do is not a story. Someone who’s a failure but who happens to be very good at what they do – that’s interesting.’

The film is about artistic success and failure. Is there an element of: ‘There but for the grace of God…’ for you both?
EC: ‘Oh yeah!’
JC: ‘Yes! I think anybody who does anything involved in a serious professional enterprise – and not just in the arts – who has any success at all, can say, “There but for the grace of God go I.”’
EC: ‘It’s weird. When you’re younger, you kind of assume you’ll be fine at whatever. Then you get older and you’re either unsuccessful and you wonder why, or you’re successful and you wonder why [laughs]. Why us? I don’t know…’
JC: ‘What you want to do is raise the question and not answer it. How much of it is luck? How much of it is talent?’
EC: ‘Or just being personally adept at dealing with other people?’
JC: ‘How much of it is having a gene that’s more about showbusiness than the person who’s talented and doesn’t have it? It’s a chaos thing. It’s like trying to figure out the cause of an allergy.’

How easy was it to find Oscar Isaac – an actor who’s also a great musician?
JC: ‘There was a point in the casting process where we thought we’d written something that was uncastable. It wasn’t about looking for a needle in a haystack – the needle wasn’t there.’

What were you looking for?
JC: ‘He had to be bona fide as a musician, but we were also asking him to carry a movie as an actor. We idiotically assumed it might be possible with a non-actor. So we’d audition musicians and they would play great. Then we’d ask them to do a scene and it was, er, alarming. When Oscar, an actor, came in, we sent his music tape to T Bone Burnett, and he said, “This guy is the real thing.”’

A runaway ginger tom has a big role in the film. You’ve said that you only included him to help glue a wayward story together. Is that a joke?
JC: ‘A half joke. Unlike a lot of the stuff we’ve done, there isn’t a plot. The question was: what gives the movie its momentum? We were like: he’s got a cat. What happens to the cat? So there’s another thing you follow. Also, we’re telling a story about a character who has a difficult time with humans but has to relate to an animal. That reveals things.’

Your New York looks like the cover of the album ‘The Freewheelin’ Bob Dylan’, with Dylan and Suze Rotolo. Was that on your mind?
EC: ‘Yeah, with “Freewheelin’…”, we were literally thinking about its colour palette and the weather.’

You definitely use the weather as a stick to beat Llewyn with.
JC: ‘We wanted everything to be oppressive!’
EC: [laughs] ‘He’s not in Oahu!’

Has Bob Dylan seen the film?
JC: ‘I don’t think so. One of the people who works for him, his manager Jeff Rosen, has seen it, and was very helpful. He gave the nod for the Dylan song [‘Farewell’] to be in it.’

‘Inside Llewyn Davis’ opens in UK cinemas on Fri Jan 24.


Watch the ‘Inside Llewyn Davis’ trailer

Read our ‘Inside Llewyn Davis’ review 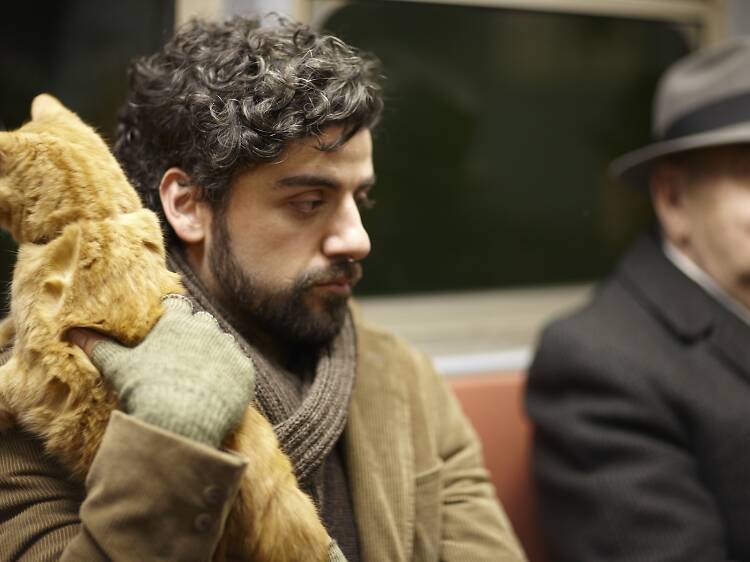 The Coens have given us a melancholic, sometimes cruel, often hilarious counterfactual version of music history. It’s a what-if imagining of a cultural also-ran that maybe tells us more about the truth than the facts themselves ever could.