The ‘Begin Again’ actress talks Hollywood, feminism and watching football on the floor

People who’ve worked with Keira Knightley always rave about how down to earth and hilarious she is. I admit I wasn’t convinced until she showed up for her Time Out shoot on foot (ignoring the email to arrange a car to pick her up) carrying a Daunt Books canvas shopper. Does she want a stylist? Nah. Too much of a faff.

They were right. Keira Knightley is down-the-pub-friendly, complimenting me on my culottes (she’s a fan of dressing for women not men: ‘I love my dungarees. They’re my favourite item of clothing ever’). In the past, she has sometimes come across as defensive – insecure even – in interviews. But she’s funny and sweary, bristling just twice. First when I mention the area of north London where she recently bought a house with her husband, and member of indie-pop band Klaxons, James Righton (‘please don’t say where I’ve moved to. I’ll have so many freaks turning up’). And she groans, shooting me a sarky look when I ask about a newspaper report that she pays herself a piddly-by-celeb-standards salary of £27,000 a year. ‘I don’t know where that one came from. It’s not true. And it was £50,000 this morning. I’ve had a pay cut.’

The 29-year-old says she’s more relaxed than ever. Is that trickling into her roles? After playing a string of head-in-the-oven heroines (‘A Dangerous Method’, ‘Anna Karenina’), her new film ‘Begin Again’ feels like a change in direction. Knightley plays Greta: a songwriter from Bristol who’s just been jerkishly dumped by her boyfriend in New York. Avoid it like E.coli if you’ve got a cynical streak. I loved it. It’s a heart-on-sleeve sweet romance with a twist – it’s not about finding a man, but about finding your friends, what sort of person you want to be and where you slot into the world. Themes that are increasingly familiar to the film’s lead.

This film feels like a change. No spanking. No throwing yourself in front of a train. Were you in the mood for something less brittle?
‘Yes, I’d got to the end of a whole period of very, very dark stuff. I wanted something with hope in it. No more neuroses! But the thing is, I like them brittle. I like playing awkward women that I wouldn’t necessarily like. I want to get into their heads.’

You play a singer-songwriter who records an album on the streets of New York. Did anyone mistake you for a busker?
‘Yes. But it’s New York. It’s a very cool city. So they don’t really pay you much attention, unless you’re in the way. In which case they go: “Get off the fucking sidewalk. I’m walking here.”’

You actually sing on the soundtrack. Do you rate your voice?
‘It is what it is. The problem is that when I open my mouth I want Shirley Bassey to come out. So it’s always a disappointment. The whole thing was nerve-wracking. I know a lot of singers. I’m married to a musician.’

Your character Greta has a mid-twenties crisis. How can you relate to that? Your career was pretty sorted when you were 25.
‘I think everyone has that. I’m constantly in a state of questioning career-wise. What kind of role should I do next? What am I looking for? Dustin Hoffman talked about going to therapy because he couldn’t choose his next role. I can understand that! And I have so many friends who are in their mid-twenties, late twenties who are like, “Am I meant to be doing this? Is this it? This isn’t it.”’

Another big part of the film is about finding your friends. Yours seem very un-Hollywood.
‘None of my friends live in Hollywood. Actually, I’m lying, three of my close friends live in Hollywood, which is really fucking annoying. But yeah, I found my people, and they’re not necessarily Hollywood people. I’ve always wanted something that’s very separate. If you do a job about make-believe, it’s important to find things – this sounds so stupid – that are real. It’s very nice having people in your life who are outside of that bubble.’

You took a gap year when you were 22. What did you do?
‘I travelled a lot. I read a lot of books. Sat on trains. I spent a lot of time on my own. It was very necessary. I loved being alone in Paris. I’ve been alone in a lot of cites in the world, and Paris is definitely the friendliest one to be a woman and on your own in. I never got hassled once.’

You’ve spoken out in the past about your image being retouched. Why?
‘There a “King Arthur” poster where I have double DD breasts. I mean, what on earth? Look at me. You can see that that’s in no way possible. It’s difficult. Doing this job, in a way you have to give over your image. There are people who clothe me, people who light me, people who design my make-up. But when you’re being told that you’re not a woman if you don’t have big tits, you have to go “Fuck off.” And I have. But I do understand the contradiction. I’ve taken the money. That’s the job. It’s a continual struggle to find that balance. And I don’t think I always manage it.’

Is it easier to bring this stuff up now that feminism is no longer a dirty word?
‘Yes! At least you can say it. I am a feminist! It was so weird that it wasn’t being talked about, that nobody was allowed to say there’s an equality issue going on here. We’re so under-represented in every fucking walk of life. And to be honest, as much as you can blame Hollywood, it’s holding a mirror up to society. But it’s a good place to start.’

You give off the impression that you’re a bit embarrassed by your own success. Is that about right?
‘It’s never sat very comfortably with me.’

You had a tough time of it in your twenties from intrusive paparazzi. How bad did it get?
‘It was pretty brutal. Brutal is the wrong word. But it was a difficult time. It was like 24/7 surveillance. Photographers constantly trying to take a picture up my skirt. They would call me a whore or try and start a fight with my boyfriend/father/brother. They’d be trying to get a reaction: “You look shit. You’re a shit actress.” Those pictures were worth a lot of money. But it’s definitely not like that for me anymore.’

A few years ago there was this sense of people not warming to you. There’s that whole thing about women that women love to hate. Did that hurt?
‘I think that came about around that same time. I was working such a lot, being followed by photographers. There was absolutely no space. You’re never going to warm to someone if they’re completely tense and frightened. Fear is a funny thing. People smell it on you. And it doesn’t make them nicer to you. It can be quite repellent. The smell of fear. I think I had that about me for long time.’

When did it get easier?
‘When I could walk down the street without anyone giving a shit! And you grow up.’

You got hitched last year. Was getting married always part of your game plan?
‘Never. My parents are deeply hippy. They got married because it was the only way they could get a mortgage at the time. So I grew up with them going: “Don’t know why you’d ever get married.” And then we did. It’s nice. It’s been fun. Until it isn’t and then you get divorced! Fingers crossed for the future.’

Are you doing the whole groupie Wag thing this summer at festivals?
‘I don’t actually know what festivals he is doing. I should know that! I might jump on the bus, if they get the bus. I love the tour bus. It’s like being in a caravan with little bunkbeds.’

You’re a big football fan. Are you glued to the telly right now?
‘I’m loving it. I watched three matches yesterday with a hangover. I had about 15 people over on Saturday and we did a big BBQ. We don’t have a sofa at the moment, so we were all on the floor.’ 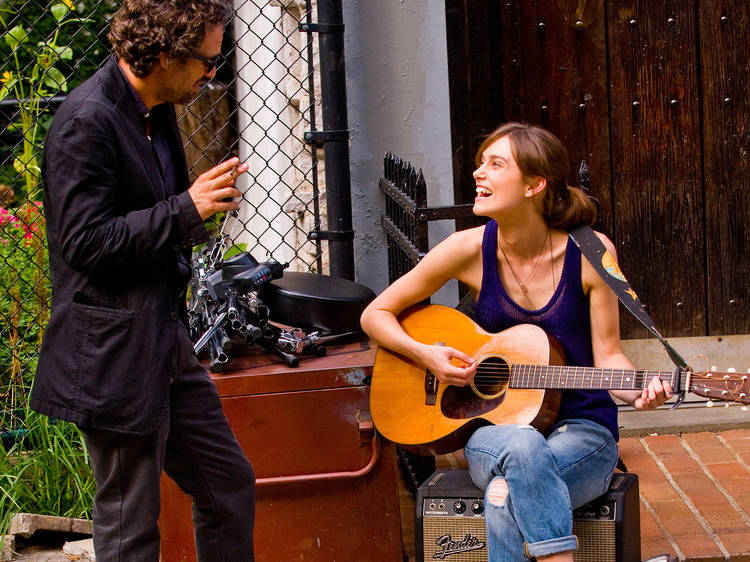 Director John Carney made the sweet indie musical-romance 'Once' on the streets of Dublin for £100,000. A slow-burner, it went on to be one of the most profitable films in years. 'Begin Again' is a similar looking film on a bigger scale, set in New York and starring Keira Knightley as a songwriter, dumped by her newly successful musician boyfriend, who records a song on the streets of NYC.