Ken Loach interview: ‘It’s difficult to keep out of mischief’

We speak to veteran director Ken Loach about rumours of retirement, ‘Jimmy’s Hall’ and how, at 77, he remains a thorn in the side of the establishment

This year’s Cannes Film Festival is especially exciting for the Brits. Two of our most revered, longstanding filmmakers, Ken Loach (‘Looking for Eric’, ‘Kes’) and Mike Leigh (‘Secrets & Lies’, ‘Naked’) will unveil highly anticipated films to the world.

Leigh has made ‘Mr Turner’, a study of the famed painter, while Loach has returned to the historical Irish territory of his 2006 Cannes Palme d’Or-winner ‘The Wind That Shakes the Barley’ in ‘Jimmy’s Hall’. It’s the loosely true story of Jimmy Gralton, an Irishman kicked out of his country after setting up a dancehall that became a heady focus for fun and politics in early 1930s County Leitrim.

Mike Leigh also has a film, ‘Mr Turner’, up for the Palme d’Or at Cannes. How do you feel about the inevitable ‘Mike versus Ken’, ‘Veteran Brit Showdown’ headlines?
‘Mike’s an old pal. I’ve known him since the 1970s. He’s a nice guy, and we’re old friends. But it does feed this cliché of two old English blokes. We’re side by side on the list too, with names beginning with L! We’re almost at opposite ends of the telescope, really, in terms of making films. The papers talk about “versus”. It’s a bit tedious.’

Is it true you’re retiring? You’ve said ‘Jimmy’s Hall’ could be your last film.
‘Well, I said that at a moment of maximum pressure before we started filming, when it seemed too big a mountain to climb. I still hope to do something, but maybe a documentary or a documentary-style fiction. But not on the scale of this new one. It’s physically demanding. I know there are people who can direct sitting down away from it all at a video monitor. But I can’t do that.’

So you’re not putting away your camera for ever?
‘No, not entirely. There’s nothing on the horizon, but I hope to keep doing bits and pieces. It’s about finding the emotional energy. You have to feel a fire at the point of doing it.’

In what way did ‘Jimmy’s Hall’ spark that fire?
‘It brought a lot of powerful ideas together. I liked the idea of this free space where people could express themselves: revolutionary ideas sitting alongside dance, education and fun. Then also, there was this alliance between organised religion and local powerbrokers who decided that this place was too dangerous. One comparison is Ai Weiwei. He built a studio for other artists. It was a focus of dissent. The Chinese destroyed it.’

Your 2006 film about Ireland, ‘The Wind That Shakes the Barley’, provoked debate. I remember the Daily Mail headline: ‘Why does this man loathe his country so much?’
‘And the Telegraph! And the Times! “A worse propagandist than Leni Riefenstahl” in the Times. And that clown Simon Heffer who writes for the Telegraph said that he hadn’t seen the film and didn’t want to see the film because he didn’t need to read “Mein Kampf” to know what a louse Hitler was! What kind of bizarre extremism, violence and reaction is that?’

Do those sorts of accusations hurt?
‘No, I just think: What an idiot. What an absolute idiot. They also criticised us for taking some money from the National Lottery [via the UK Film Council] to make it. But the film did well. They probably made some money! They think we should be part of the tourist board.’

The writer of ‘Jimmy’s Hall’, Paul Laverty, has compared its main character to Julian Assange and Edward Snowden. Do you agree?
‘Absolutely: it’s people they see as dangerous. Back in the day it was Arthur Scargill. It was Tony Benn before he got elderly. If Len McCluskey [general secretary of the Unite union] lives up to what he says he’ll do, he’ll be attacked. Bob Crow was vilified. Julian Assange was seen as dangerous because through WikiLeaks he showed the criminality of the slaughter of people in Iraq. They’ve gone for him. The way he’s been deserted by the liberal press is shocking.’

You provided some of Julian Assange’s bail money. Have you been criticised for that?
‘Probably, yeah: they try and take the piss. But it’s part of a wider manipulation, isn’t it? The wider manipulation that presents the conflict between Israel and Palestine as if it’s between two equals. Look at the BBC’s “Today” programme on the radio this morning. It gives the RMT [transport union] a bit to talk about the strike and then lets the management allege things that aren’t true but with no right of reply for the RMT. It’s quite conscious. They know what they’re doing.’

Politics are in your veins. Will next year’s general election keep you busy in semi-retirement?
‘I’ve supported this new formation called Left Unity. We need an opposition to what’s going on. Miliband and his gang won’t do it; they’ll change the small print but they’re not a real opposition. So yeah, it’s difficult to keep out of mischief, really. You’ve got to do what you can.’ 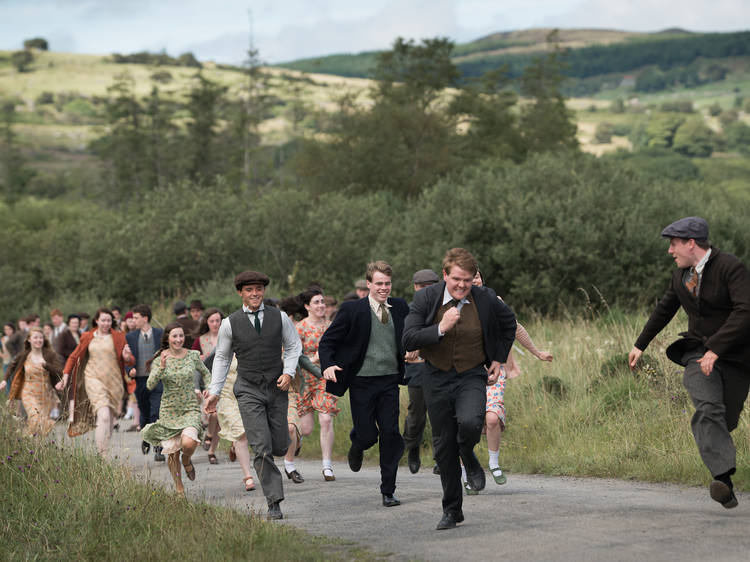 Based on a real-life tale, the film follows notorious 1930s Irish communist James Gralton’s attempts to open a dancehall in his home town. Music, politics, community, economic strife, kitchen-sink realism and even a heartwarming production story – American animation giants Pixar stepped in with some old-school editing equipement after Loach’s store ran dry – make this sound like the perfect package.