Riding in a car from the airport to her home in Brooklyn, Maggie Gyllenhaal is telling me off. “How dare you!” she exclaims in a mock-British accent. “An English friend of mine told me that whenever any journalist asks me about turning 40, my answer should be that.” The 39-year-old actor is known for standing up both offscreen (she’s a renowned social activist, and she revealed to the press that two years ago she was deemed “too old” to play the love interest of a man 20 years her senior) and on: After a small role alongside her brother, Jake, in Donnie Darko, Gyllenhaal had her own breakthrough a year later in 2002’s Secretary and since then has played a variety of headstrong, progressive badasses, including ex-prisoner Sherry Swanson in Sherrybaby and businesswoman Nessa Stein in TV miniseries The Honourable Woman (a gig that won Gyllenhaal a Golden Globe).

The New Yorker’s latest character is no different. In the highly anticipated HBO series The Deuce, created by The Wire’s David Simon and starring James Franco, producer-costar Gyllenhaal portrays Candy, a crafty Times Square prostitute in the ’70s navigating the early days of the porn industry. “It’s so hard to find realistic depictions of the female experience,” Gyllenhaal says, expressing a sort of admiration—or at least respect—for Candy, whom she dubs “an artist.” Maybe it’s the character’s fighting spirit. Besides, the actor herself has one that doesn’t show any signs of diminishing. “Some women who are a generation or two older than me stop living,” she says, pontificating again on her upcoming birthday. “I want to keep getting older and staying awake.”

A few years ago, you said you wouldn’t play a hooker unless you found a role that shows what’s underneath the veneer. I’m assuming your role as Candy fulfills this?
[Laughs] Yeah. For Candy, being a prostitute is her job, but there are other elements to her. In the pilot, there’s a boy who comes really quickly, wants to go again and feels it isn’t fair that she has to charge him again. She explains to him that this is her job. Often when we see prostitute characters, all you get is that they’re prostitutes. But there’s something wrong about that in terms of how we tell a story about a woman, right? Candy is a mother, a daughter, a businesswoman, an artist…and also a prostitute.

Do you search for roles that make you uncomfortable?
Yeah, I learn things in my work before I learn them in my life. I’ll find a role that I’ll be pulled toward, and I won’t know why. I’ll take some leap of faith. It’s easier to learn things while acting than it is in real life. 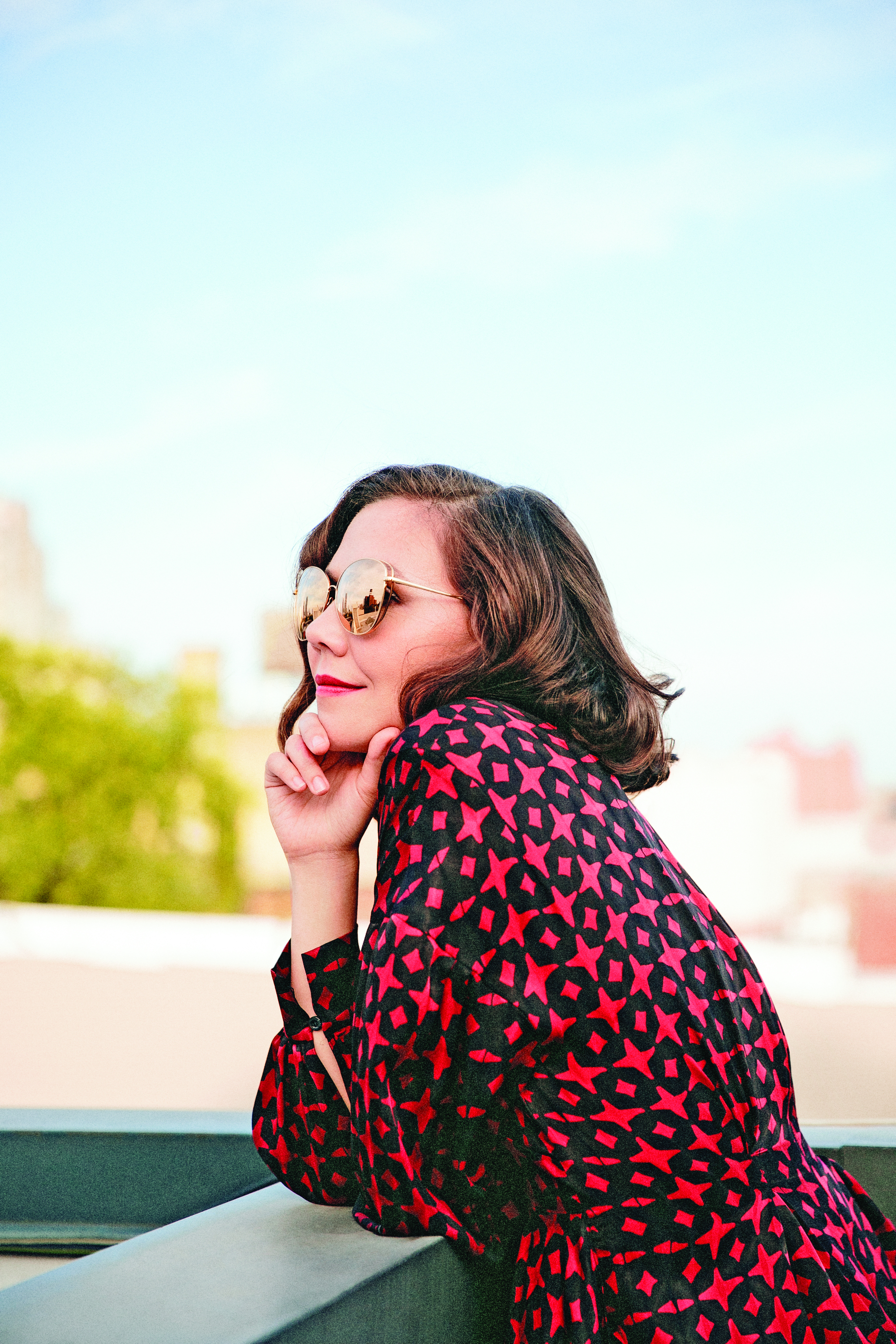 So it’s like a dress rehearsal?
Sometimes, yeah. Secretary, for example. I was so young—22. I was half-reading books about sexual politics. The role was about who you actually are as opposed to who you think you’re supposed to be. That was exactly what I was going through. When I made Crazy Heart, it was about someone who loves another who’s not right for them. I learned so much about my own marriage. Then The Honourable Woman…God, that was epic.

In The Deuce, you’re not only acting but producing. How did that come about?
Playing a prostitute is a delicate thing, so I said, “I want to do it, but I want to be a producer.” Everyone from my agent and my manager to my friends said, “They’re never going to give you that; this is HBO.” I didn’t see how else I could sign up for it and have self-respect. I’d have to use my body all over the place, and I wanted to make sure that they also wanted my mind. They said okay.

Your costar James Franco directed some of your sex scenes. What was that like?
We’re exactly the same age. There’s no bullshit, just absolute clarity. James doesn’t remind me of my actual brother, but he felt like a brother. He’d say, “Imagine shooting the sex scene like this,” and I would say, “No, you can’t because that’s a terrible angle for any woman. How about this?” And he’d say, “Right, yeah! People have sex like that!”

To get serious for a moment, do you think the current political climate affected the show?
We finished shooting at the beginning of November, and the presidential debates bubbled underneath the work we were doing—sexual politics, sex, art and women in relation to power. It’s an exciting time to be thinking about sexuality and power through the eyes of a prostitute as opposed to a politician, a lawyer or a doctor.

And how about since the election?
I found my sense of self as a feminist shifted by this election. Since this show was made, the level of misogyny in this country has been laid on the table. There was sexism around me [before], but I thought I could handle it, so I’d let things go. Since the election, it’s dangerous to do that. I do see sexism in a way that I didn’t before Trump’s election. But I also think it’s a really inspiring time to be a woman in the world. I feel excited. I truly do.

Did breaking through at the same time as your brother, Jake, give you a sharper perspective on how men and women are treated differently in Hollywood?
You know what, I was wondering about my brother recently. As a producer on The Deuce, I’d see cuts of each episode as they came through. There’d be things I felt so strongly about; they’d would keep me up the whole night. I’d write these emails that would take me two hours to compose. I felt that I needed to give the note perfectly in order for it to be heard. As I was writing one of them, I thought, I wonder if my brother has to do this?

Maggie Gyllenhaal in The Duece

The show takes place in a seedy Times Square of yesteryear. Do you have childhood memories of Times Square?
I remember visiting my Aunt Frieda and Uncle Murray in the ’80s, when I was seven. They took me to a play on Broadway, and they spoke Yiddish about these “ladies of the night,” referring to these prostitutes [we saw] as we were taking a taxi. I asked them what they were talking about, and they shushed me. Now I try to avoid Times Square. I did a play there a couple years ago, and I would just put my head down, go to the theater and go home.

In Brooklyn, you and Peter Sarsgaard are something of an It couple. Are you still able to enjoy your ’hood?
Oh, definitely. We’ve lived in the same neighborhood for 10 years and know all our neighbors. We have restaurants we go to. We know the people who run the grocery stores. But I feel a little overwhelmed by New York.

So would you consider leaving NYC?
I have. I don’t know. I went to see LCD Soundsystem play at this new venue in Brooklyn and thought, This is why I live here. It was crazy good. I love New York, the food, the community I have. But something’s gotta give.

The Deuce premieres Sept 10 on HBO. 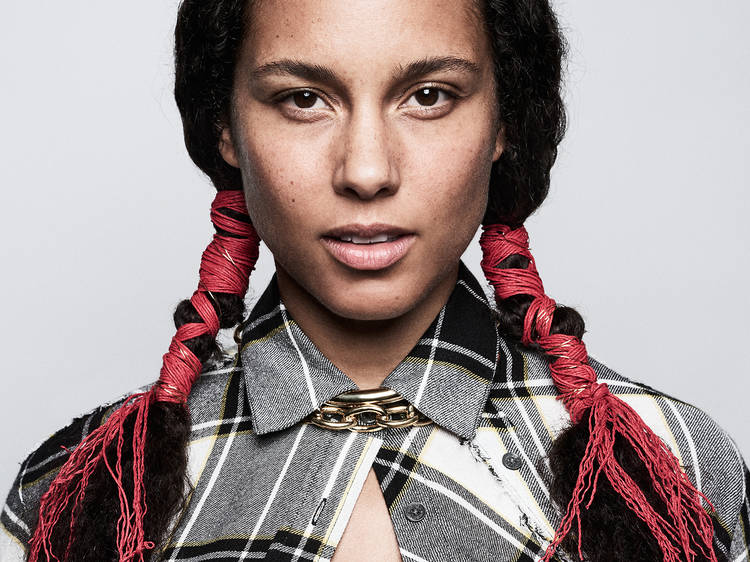