Michael Fassbender interview: ‘You have to take risks’

Think ‘coolest actors alive’ and chances are Michael Fassbender will figure somewhere on the list. GQ puts him on the cover in suits costing half a year’s salary. Daniel Radcliffe chooses parts by asking himself: ‘What would Michael Fassbender do?’ The half-German, half-Irish actor makes straight men go weak at the knees. Women love him too. ‘He lives near London Fields?’ a female colleague practically shrieks. ‘Where?’ (Reacting as if this is information she might actually use.)

And in his new film ‘Frank’, based on ’80s cult comedy oddball Frank Sidebottom, Fassbender even pulls off wearing a huge fake head. You don’t need to know anything about Frank Sidebottom to watch ‘Frank’. The character has been reinvented. Gone are the naff songs and the nasal northern accent. Fassbender’s Frank is a Texan musician with the potential to become an indie god (if his band can make it to SXSW without someone getting stabbed).

Lovable weirdo Frank is Fassbender’s most endearing role to date. As an actor, he has gone to dark, uncomfortable places including out-evil-ing everyone in ‘12 Years a Slave’ earlier this year. And fans of the Fassbender twitch – that thing he does with the muscle in his jaw, indicating barely contained fury – won’t have long to wait for more. He’s back as Magneto in the new ‘X-Men’ later this month and has just finished shooting a film of ‘Macbeth’ with Marion Cotillard as Lady M.

So, Michael Fassbender, you’re one of the most in-demand actors in Hollywood. What on earth possessed you to put on Frank Sidebottom’s head?
‘I just thought it would be a fun thing to do. I read the script and laughed out loud. I loved it, it’s mad.’

It wasn’t a cry of angst? ‘Poor me, Michael Fassbender, I’m so sick of being famous and Oscar-nominated. I need to get away from it.’
‘What, to hide behind a mask, and be like: “I am not famous!” No. I just thought it would be fun. Have you ever gone to a fancy dress party and worn a mask? It’s liberating. I got to do some of that at drama school – putting on different masks. The whole idea is that people wear masks all the time in life. Frank is just doing it in a very honest way. It’s touching.’

You grew up in Ireland. Did you even know who Frank Sidebottom was?
‘No. It’s an English thing. I imagined a different head when I was reading the script. More rugged. Then I watched all the footage I could find on YouTube.’
And seeing the actual head didn’t put you off?
‘No!’

‘Frank’ is bonkers in a brilliant way. Were you worried it might end up just bonkers bonkers?
‘No. You have to take risks. It’s not like I want to fail, and I always have that fear of failure. But I don’t want to be imprisoned by it. When I read the script, it had a physical effect on me: “I want to do this.”’

How did people react to you in the street?
‘I have absolutely no idea. I couldn’t see them. The eyes are gauze, so I had a bit of vision at the sides, but I couldn’t really see anything out of the front. At the beginning it was a bit weird and claustrophobic. Then I started to enjoy it: letting other people worry if I was going to run into something. I felt a lot more mischievous.’

You play all these dark characters, but you don’t seem like the brooding, tormented type. Does that surprise people when you meet them?
‘Yeah, I suppose it does. But comedians can be really dark personalities and they make you laugh. I think you can flip that the other way.’

How do you switch off if you’re playing a character like Edwin Epps in ‘12 Years a Slave’? What do you do when Steve McQueen calls ‘cut’ on the rape scene?
‘Run! No seriously, at a certain point I realised that I didn’t want to be bringing work home with me. As an actor you can get self-obsessed. So I just sort of made a decision to leave it. I prepare well, work hard on the day and then I leave it. The only time I get upset is if I feel like I’ve done a day’s work and it’s gone badly because I wasn’t prepared enough.’

You’ve never played an average, normal family guy. Why not?
‘I want something to happen to this family guy! I suppose there have been a lot of heavy characters. I don’t know why. I would do more comedies for sure.’

You like racing cars and you ride a motorbike. As a speed junky, would you like to play James Bond?
‘Of course! Bond is always appealing. Especially the age I am, growing up with it, the music. But you know I’m probably chickenshit compared to proper adrenalin junkies. I like racing, but I’m not very good at it.’

You’re still in the same flat in Hackney that you lived in before you were famous. Why haven’t you moved?
‘The real question you should be asking is why haven’t I done anything to the flat since I moved into it. I don’t know why I haven’t moved. I haven’t been there a great deal. I was home for three months of last year.’

Someone should tell estate agents in London Fields. They’ve been telling house-buyers that you’re a local.
‘That’s very funny. I should get commission.’

What do you spend your money on if it’s not property?
‘That’s a bit of a personal question. Not a great deal, to be honest.’

You’re close to Steve McQueen. Did you want the Oscar win for him more than for yourself?
‘Of course not! But seriously, absolutely. It was great to see Steve up there taking the Oscar for Best Picture. He changed my life. I owe everything to Steve. He’s just a fantastic, brilliant artist and a dear friend.’

You have a reputation for being a Hollywood wild man. How did that start?
‘I don’t know. I suppose it makes for a more interesting read than Michael Fassbender, normal guy.’

Hang on. Keira Knightley once said of you: ‘Michael Fassbender can always be relied on to buy a bottle of champagne when one is needed.’ What’s that about, then?
‘That’s just being civilised.’

‘Frank’ opens in UK cinemas on May 9. 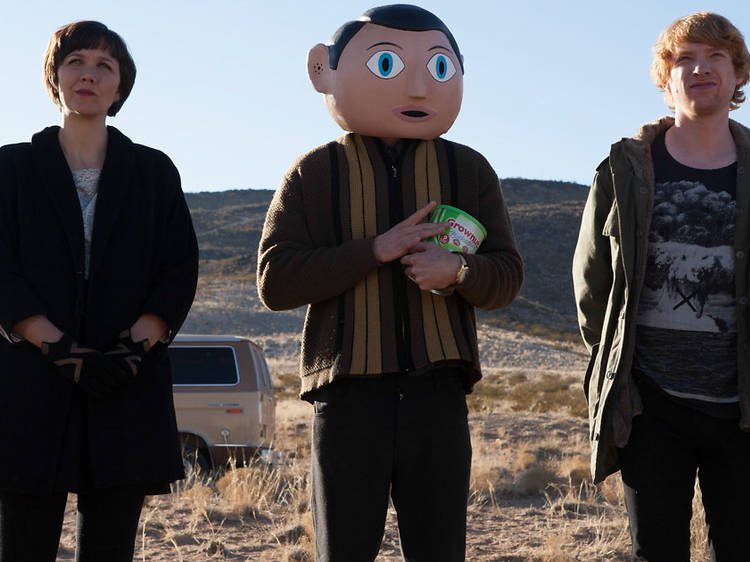 Dazzlingly strange art rock pours out of 'Frank', both the movie, a dark comedy from the Irish director Lenny Abrahamson ('What Richard Did', 'Garage'), and the title character, a singer devoted to lyrics about random tufts of string and terrifying litanies that might have freaked out Joy Division's Ian Curtis.