When you get the call from Michael Shannon’s publicist saying that your previously postponed interview is back on and he’s free to talk right now in a park on the Lower East Side, you drop what you’re doing and jump in an Uber—with or without your notes. Because Shannon is a busy guy. He has two movies that are about to premiere at the Tribeca Film Festival and two others currently playing in theaters—not to mention the meaty Broadway role that’s keeping him swamped with rehearsals.

When I find the 41-year-old actor in First Park, he’s sharing a picnic table with an older man who appears to be doing that New York thing of being aware that he’s talking to someone famous but unwilling to cop to the fact that he knows. This has been happening to Shannon a lot recently. “I was on the subway today,” he tells me, “and I had a book in my hand, and there was a guy sitting next to me, kinda checking me out the way people do sometimes. He wanted to talk, so he finally said, ‘Is that a good book you’re reading?’ I said, ‘Well, this is Long Day’s Journey Into Night. This is one of the greatest plays ever written.’ I then said, ‘That’s a complicated question, if it’s a good book or not, because I’m in this play right now, so it’s kinda like my bible.’ ”

About Shannon’s sacred text: Through June 26, you can find the actor at the Roundabout Theatre playing James Tyrone Jr., the emotionally volatile elder son in Eugene O’Neill’s most distinctive family, alongside Jessica Lange, Gabriel Byrne and John Gallagher, Jr. And starting this week at the Tribeca Film Festival, you can also find him channeling a gambling-addicted writer in Bart Freundlich’s Wolves and the King of Rock & Roll in Elvis & Nixon, opposite Kevin Spacey’s titular president. As if that weren’t enough, you can catch two of his latest film roles on a screen near you: as a cult escapee with a miracle-working son in regular collaborator Jeff Nichols’s Midnight Special and as the villainous Kryptonian General Zod in Batman v Superman: Dawn of Justice, which more than anything else has helped accelerate Shannon’s unlikely journey from fringe theater player to full-blown movie star.

This diversity of projects and characters is a trademark of Shannon’s career. His early stage work was defined by roles like a paranoid Gulf War veteran on a meth binge in Tracy Letts’s Bug (he’d return to the role for William Friedkin’s 2006 film adaptation), and he made his breakout, Oscar-nominated screen moment in Sam Mendes’s Revolutionary Road, in which he played the electroshocked voice of reason John Givings.

Yet despite his variety of films—low-budget indies, box-office–shattering blockbusters—one constant has been Shannon’s onscreen intensity. (In person, his six-foot-three frame, square jaw and hypnotic, darting-around-to-the-periphery blue eyes are imposing, a characteristic Shannon tempers by hunching over with a friendly grin.) Perhaps it’s this fierce aura that’s made him a perfect fit for tackling messed-up characters. “I’ve never really been overly concerned about whether people like the character or not,” he says when I press him about his tendency to tackle dark roles. “It’s more just a pursuit of understanding complex human behavior, regardless of whether it’s likable or unlikable. Because that’s not the point at the end of the day. You don’t look back at your career and think, Wow, I played a bunch of characters who people liked.”

Hence his role in Wolves as a New York high school basketball standout’s painfully flawed father who’s collapsing under the weight of a crushing gambling habit and pent-up jealousy over his son’s success. His character, Lee, is, by all conceivable metrics, a horrible human being. He’s a careless, toxically optimistic narcissist who channels his rage over his own failings into physical abuse and increasingly risky wagers. There are moments when his self-destruction reaches such painful peaks that you catch yourself shielding your eyes like you’re watching a horror movie.

“The first time I read the script, I was like, This guy’s intolerable,” admits Shannon. “I thought it would be an interesting challenge, because I think underneath all the barnacles that this guy has accumulated, he really does actually genuinely love his family. He’s just so traumatized and dysfunctional that he can’t necessarily act on that love. I wanted to see if I could still get it in there.” He truly pulls it off, too. Each time the character fails to live up to basic human standards, you feel as let down as his son and wife and strain to believe that he’ll get it together and become a better person. He doesn’t, and the combination of Shannon’s empathy and Freundlich’s tautly plotted script make it brutally beautiful to watch.

But for as much as he’s earned a reputation for convincingly playing eccentrics, weirdos and the difficult-to-like, this is also an actor who’s appeared in three Jerry Bruckheimer–produced movies (including what is maybe Bruckheimer’s best, Bad Boys 2, and maybe his most egregious, Kangaroo Jack). Shannon’s been able to parlay his talent for finding the relatable side to complicated bad guys—like General Zod (who you can buy at Toys “R” Us in action-figure form) and Nelson Van Alden, the puritanical prohibitionist turned bootlegger he played on all five seasons of Boardwalk Empire—in high-profile projects that have launched him to the level of fame that gets him stopped on the street.

It’s the type of profitable transition that characters dream of. Yet Shannon’s ambivalent about it. “I don’t mean to sound like a dullard, but for me it’s all about the work,” he says. “I appreciate the people who see the work that I do, but I’m always very hesitant to buy into some notion that I’ve reached the top or whatever. ’Cause you can’t really do anything—you can’t do a lot—with fame. It doesn’t really translate into anything. It just means that people recognize you. That’s all.” 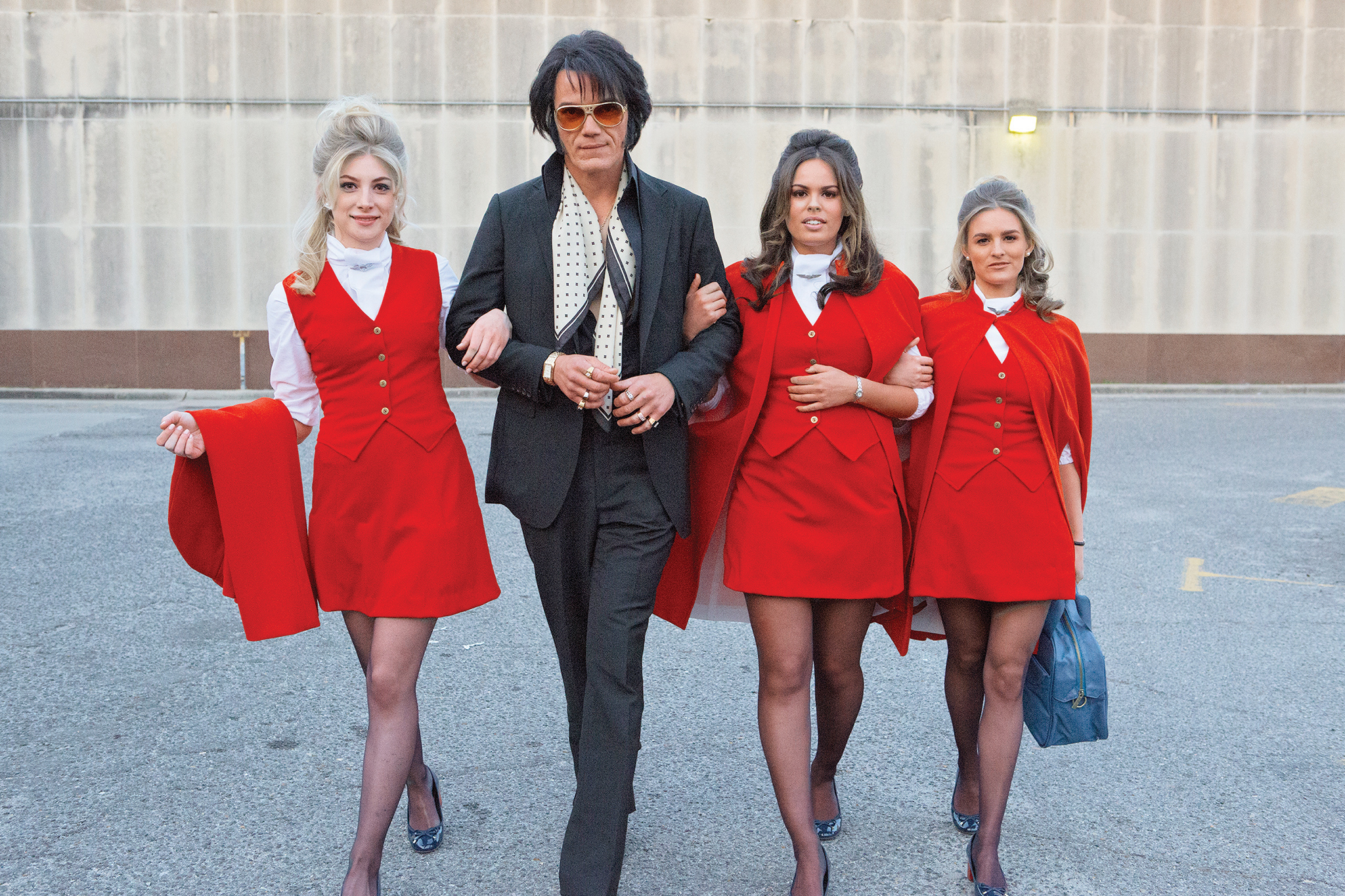 “You don’t look back at your career and think, Wow, I played a bunch of characters who people liked.”

When he and his partner Kate Arrington relocated to New York from Chicago, where the pair had come up through the city’s well-established theater scene (both remain active in it), they moved in with Arrington’s sister in Red Hook. They still live in the same neighborhood, which provides Shannon with a critical distance from his burgeoning fame as well as the general hassles of life in a rapidly upscaling city. “I like it over there,” he says. “It’s pretty quiet. I mean, it’s getting more popular, obviously, but it’s kind of a refuge from…I can’t really see living in Manhattan. It’s a little too hectic for me. It’s weird, I was looking up at this building over here,” he says, pointing down Houston Street and recalling doing Killer Joe off the thoroughfare years ago, “and it says LUXURY RESIDENCES ON LUDLOW, which is not a sign I ever thought I’d see.” Our conversation shifts to the constant cycle of nostalgia that happens in NYC. “Sometimes I wish I’d seen more of an older version of New York,” he tells me, “but everyone I say that to says I’m crazy. I say, ‘Oh, I’d have loved to have been here in the late ’70s. I would’ve gone to CBGB every night,’ and they say, ‘Yeah, you probably would’ve gotten stabbed.’”

“I’m kind of a technophobe,” Shannon admits, continuing our talk about the old days. “A lot of people, no matter where they are, they’re on that,” he says, pointing at the iPhone I’ve placed between us to record our conversation. “I was reading this article in Rolling Stone; it was like, ‘Oh, yeah, pretty soon they may actually be able to make something like Skynet from The Terminator,’ and I was like, ‘Uh, I don’t know if that’s such a good idea.’ ”

The stage, you could say, might be another refuge for the actor—from movie stardom, from being noticed in Manhattan, from celebrity tweets. Shannon didn’t come from an acting family, but his father, an accountant, spent a lot of time in New York before his son’s birth, and performing O’Neill on the Great White Way has a special resonance for the actor. “He used to tell me about going to see O’Neill plays on Broadway,” Shannon says of his father. “It was a big deal for him. It was kind of how he related to what I was doing, because it was kind of out of left field. There’s nobody in my family that does this. And he’s passed away, so I kind of wanted to do [Long Day’s Journey into Night] for him.”

On arguably the opposite end of the dramatic spectrum is Elvis & Nixon, which not only teases out some of the story behind the first rock superstar’s historic meeting with the president (it produced the most requested image ever in the National Archives) but deftly examines his relationship with his own pop mythology. Shannon is the first to admit that he’s an odd choice for the role. “I didn’t really know much about Elvis,” he says. “I couldn’t really see it.” What’s more, Shannon’s chiseled features contrast sharply with late-era Elvis’s chubby-cheeked looks, and he doesn’t even try to modulate his reedy Midwestern accent into a Mississippi growl.

Once the strangeness of it wears off, though, it’s a compelling performance that locates the lonely human being lurking behind the armor of his shades, jewelry and hairspray. The film could have easily turned into a kitschy ball of fluff, but Shannon somehow manages to find a new depth in a figure whose legacy has been picked to the bone by decades of analysis.

In the end, putting thought into the characters he portrays, filling them with realness until they seem to pop right off the screen, is what Shannon does best. “I’m just fascinated by people,” he says. “I like exploring human behavior because life happens very quickly. What I do affords me the opportunity to stop time a little bit and really try and understand how people tick.”

And just like that, our scheduled time together is up. With an apologetic smile, a warm Midwestern handshake and an invitation to see his band, Corporal, play its upcoming gig at Pianos, he’s off. Michael Shannon has left the building.