He’s the Daddy. He’s the boy from Hackney who became a Hollywood actor. But don’t ask him to join in posh-bashing Cumbers and the gang

Ray Winstone is the living embodiment of that hackneyed old phrase ‘working-class boy made good’. The 58-year-old East End ex-boxer has gone from playing ‘The Daddy’ in Alan Clarke’s brutal 1979 British film ‘Scum’ to working with top-league Hollywood directors like Martin Scorsese (‘The Departed’) and Steven Spielberg (‘Indiana Jones and the Kingdom of the Crystal Skull’).

In ‘The Gunman’, out this week, he plays a Cockney bruiser who turns guardian angel to a troubled assassin played by Sean Penn. It’s hardly a stretch. But Winstone couldn’t care less what people think of him. ‘I don’t have to prove anything about who I am,’ he says to me in a plush Soho hotel, reclining on a leather sofa looking every inch the dapper London gent. And having dragged himself up by his own bootstraps as a young man, he isn’t feeling especially sympathetic towards working-class actors who feel that public school educated types like Eddie Redmayne and Benedict Cumberbatch are hogging all the best roles.

There’s been a lot in the papers recently about the creative industries being shut to people from less privileged backgrounds. Is that your view?
‘No. I don’t understand it. In the ’50s and ’60s you had all these [working-class] actors coming through, Albert Finney, Richard Burton and Anthony Hopkins, guys who came out of the mines. They gave kids like me a chance to come up. So we’ve had our moment, believe me. And now it’s gone round to the chaps again. I didn’t hear the chaps screaming back then about how it was all working-class.’

But don’t you think it’s unfair, for instance, that kids from wealthy backgrounds can afford to take unpaid internships, while poorer kids have to go straight out to work?
‘Well, their mum and dad went out to make that money in the first place. I’m earning a few quid now, I can afford to look after my girls so they can follow their dreams. I suppose it depends how these people got their money. But are we meant to go through all of them and see whose dad was a wanker?’

So you don’t have a problem with the young Ray Winstones of today not being able to make it?
‘I’m commenting here on something I don’t really know much about. But I think it’s up to us to go and create interesting stuff. If it’s good, someone’ll want it. Are you saying we don’t get the [financial] backing from the government? Hospitals, fire stations and education are all going down the pan. Do we look at that first, or do we look at the arts?’

You play another hardman in ‘The Gunman’. But off-screen you have a reputation as a gent. Is it important to keep your public persona sweet?
‘That’s just me. I don’t feel like I’ve got to have a persona to please anyone. I live my life how I wanna live it, be who I wanna be. I couldn’t give a fuck if people think I’m a nice guy or not.’

Do you still have a temper on you?
‘Fucking right. That’s part of having a passion, expressing how you feel. It’s when people abuse their power that I don’t like it. I do get the ’ump though. I’m a miserable old fucker.’

Can you still walk around the East End, or is it too much hassle?
‘I do, and I always will. You can’t lock yourself away. In the village [in Essex] where I live, the first time I walked down the street people might’ve stared, but now it’s just normal. You’re a roofer, you’re a lawyer, I’m an actor. When I first moved there, the battery went on my old banger. I phoned the garage and they sent someone over to give me a jump start. I said: “How much do I owe you?” And he goes: “No, in the village we all help one another.” I said: “Okay, tell me when you’ve got a dinner party and I’ll come round and read you some poetry. What can I possibly do for you? Take the tenner!”’

Do you ever regret not going into a more – for want of a better word – ‘honest’ profession?
‘Sometimes you can’t help thinking this is a ridiculous way to make a living. It’s like being a schizophrenic transvestite, dressing up in someone else’s clothes. I’d love to have invented penicillin or landed on the moon. They say: “But you’re giving the world joy.” Ha! I’m just a lucky boy who ain’t gotta dig an ’ole every day.’

You were a champion boxer in your teens. Is boxing a good training ground for an actor?
‘Maybe. You learn to tune your instincts about people. On a set, you have to suss out how someone is, what their temperament’s like. Do they like you to talk to them? Do they want their own space, do they like to have a laugh? People work in different ways. Difference is, in the ring you get punched if you do something wrong. Here, you just get booed. I’d rather get booed.’ 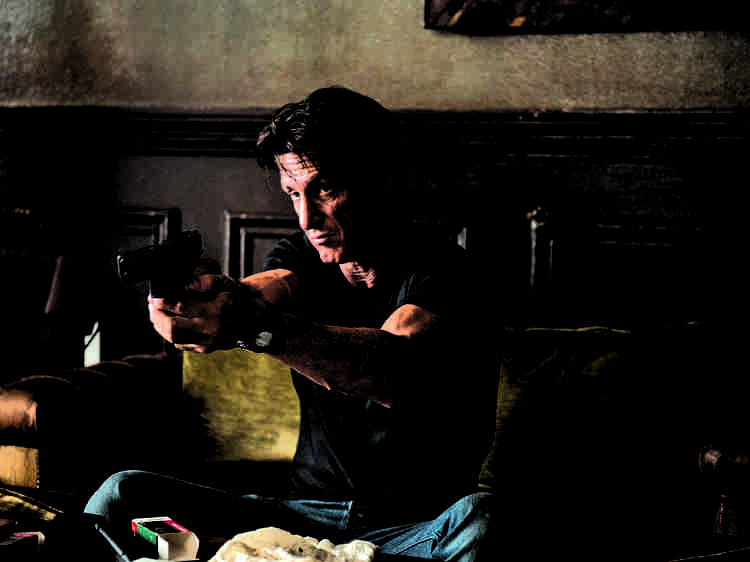 ‘The Gunman’ has its heart in the right place, and there’s no arguing with that none-more-grizzled cast. But thanks to ‘Taken’ director Pierre Morel, this too often feels like just another slice of brainless Eurotrash, packed with saw-it-coming plot twists, half-hearted car chases and an angsty hero with mega muscles and zero charisma.