As Robert Pattinson’s first film since ‘Twilight’ hits cinemas, he talks crippling anxiety, surviving his vampire past and why fame has turned him into a recluse

As he walks into a London hotel room it dawns on me that there’ll never be talk of Robert Pattinson playing Bond. He’s just not the type. He’s too scruffy (seriously, some effort has clearly been made today, but it still looks like his jacket was blown on by the wind). But that’s okay, because as soon as he starts talking – smart, funny, a bit mumbly, slightly nervy – it’s obvious that 007 is not the direction he wants his career to take.

Since the last ‘Twilight’ in 2012, R-Patz (as we should probably stop calling him) has backed away from fame, split with Kristen Stewart and worked with auteurs like David Cronenberg, Werner Herzog and soon, he hopes, Harmony Korine (on a project Korine is writing for him). And it’s paying off. ‘The kid can act,’is the verdict of one film critic about his performance in ‘The Rover’, a post-apocalyptic Aussie road movie. Pattinson plays Rey, a stammering, tattooed simpleton left for dead by his brother in the Australian outback.

Did the non-stop paparazzi intrusion that came with ‘Twilight’ ever put you off acting?
‘No. Acting is the one thing you can control. If you give that up you’re literally just a pawn in someone else’s game. It never entered my mind. But I’ve definitely become a recluse. I hate getting photographed. So my life has contracted a lot. I do almost anything to avoid being photographed. So I only go to places with underground parking lots. It sounds stupid. But it means I don’t have to deal with that anxiety anymore.’

Keira Knightley has talked about aggressive paparazzi trying to start fights with her dad and brother. Is that your experience?
‘It’s kind of scary. If you’re going out and you’re a bit drunk, it’s the law of averages… it’s just a matter of time before you punch someone in the face and that’s a million dollars. That’s why I can’t live in London. I would love to live here, but there’s no point. You have people outside your house all the time. In LA, I moved into a gated community.’

The director of your new film ‘The Rover’, David Michôd, said his biggest worry was that you actors would die in the 45-degree heat in the Aussie outback. Was it miserable?
‘No! Everyone keeps asking about how awful the conditions were. But it was kind of nice. I liked it. The landscape is amazing and beautiful. The town was nine hours out of Adelaide in the desert. We were living in what were basically converted shipping containers with doors. There was nothing to do. One pub. That was it. I literally ate bread and barbecue sauce for six weeks, every single day. The only thing is there is a ton of flies. Enormous flies everywhere.’

Did you have to audition?
‘Yes. My main problem with acting is crippling anxiety, especially in auditions. Since “Twilight” I’ve tried to avoid them, I’ve maybe done three. The idea of it being a competition gets too much for me, and I can’t actually do anything. But with this, I just loved the script so much. David let me have 45 minutes to work through neuroses before we started. I calmed down after the first hour.’

Do you feel more confident about your acting now?
‘Well, I always feel like I’m starting from scratch every movie. I genuinely have no idea if something’s going to work or not. That happens quite a lot.’

In the film you play Rey. We know nothing about him – only that he stutters and is slow. Has he got learning difficulties?
‘Not quite. He’s someone who just has absolutely no faith in himself. He’s profoundly bullied to the point where he doesn’t even know he’s being bullied. Then when he meets Guy Pearce’s character, even though it’s this very aggressive relationship, it gives him a bit of a self-esteem boost. Guy actually listens to him, even when he’s asking: “Tell me where we’re going half-wit.” Rey is happy to just follow him around like a dog.’

Where are the women in this film? It’s so macho.
‘There are no women anywhere! But, in all these mining towns, or in Canada at the oil rigs, there’s literally no women and it becomes a very strange environment because guys go a bit nuts.’

I guess they’re making the point that fame hasn’t turned you into a monster?
‘I fell into “Twilight”, so I’ve always had a little bit of detachment. And you get afraid of losing yourself, so you grip on to certain aspects of your life. I’ve got really good friends from growing up. I think the people who really lose it are the people who’ve only had friends from when they became famous. It’s a different kind of friend.’

‘The Rover’ is released Londonwide on Aug 15.


Watch the 'The Rover' trailer 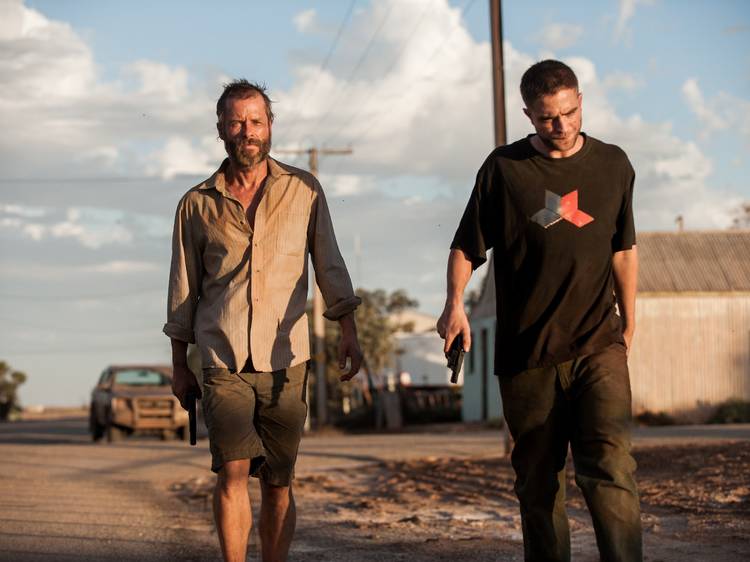 Is there something in the water in Australia? The country that gave us the post-apocalyptic motorway games of ‘Mad Max’ now offers a variation on the theme, only drier and dirtier. David Michôd (‘Animal Kingdom’) efficiently sets up a vague global ‘collapse’, a stolen-car scenario and little in the way of humour in his new feature.