Saoirse Ronan: 'I could have ended up like Lindsay Lohan'

Oscar nominated at 12 and bounced on Brad Pitt's knee on her first film set, the star of ‘Byzantium’ talks about how to handle Hollywood

‘I’d be sitting there at dinner, and there’s Tilda Swinton at one end of the table… Harvey Keitel, Willem Dafoe. And Bill Murray: he’s mad!’ Irish-American actress Saoirse Ronan rattles off some of Hollywood’s coolest names – her housemates while shooting Wes Anderson’s new comedy ‘The Grand Budapest Hotel’ in Berlin earlier this year.

The 19-year-old doesn’t get starstruck easily, but she admits that living arrangements for the filming (Anderson insisted the actors stay at the same hotel) were ‘kind of bizarre’. ‘All these really famous people…’ Her eyes widen. ‘We ate dinner together every night, Wes sitting at the head of the table. He dressed for dinner. Every day he’d come home and change out of his tweed suit into a little cashmere sweater!’

A bundle of energy, Ronan is the most teenage teenage actress I’ve ever met. Child stars are not meant to grow up normal – they’re meant to grow up wild like weeds, into tangled messes. Not this child star. She emerged a fully formed actress in ‘Atonement’, only 12 when she filmed her scenes as Briony Tallis. Seven years later, wearing skinny jeans, Dr Martens and her most recent buy, a bright green Urban Outfitters bomber (‘only 60 quid, but it’s silk’), she’s brutally honest about the dangers of being a teenager in Hollywood.

‘I could have ended up like Lindsay Lohan. You’re being offered all these different temptations.’ Like what? ‘You know! And everyone is either telling you how great you are or talking about you behind your back. Lindsay Lohan was the It girl from like 14. That’s a lot of pressure. If you don’t have your mam telling you “Remember, you’re still my daughter”, you’re going to go off the rails.’

We’re in a nice hotel in Soho. In the room next door, Ronan’s minders are in a flap. Heavy winds delayed her flight in from Dublin by two hours. Interviews need to be rescheduled. She can’t be late for Jonathan Ross. Tomorrow she jets off to Detroit where Ryan Gosling (‘so lovely, a regular bloke’) has cast her in a film he’s directing.

Cheerfully oblivious, Ronan tells me ‘The Grand Budapest Hotel’ (due out next year) was her first job without her parents chaperoning. The hotel was ‘cool and everything’, but she had been hoping to get a place with a little kitchen of her own. ‘I wanted to be able to cook for myself,’ she says wistfully. ‘I don’t want everyone doing everything for me, you know?’ Her face is a picture of teenage earnestness. ‘I want to naturally be able to grow up as a normal person.’

To be fair, nothing much in her life is normal. Ronan was 13 when she was nominated for an Oscar for ‘Atonement’. Her memories of the night are of being ‘knackered and hungry’. And she was on a film set before she could walk. Her parents emigrated to New York from Ireland in the late ’80s when times got tough. Her dad Paul took every job under the sun, including one in a bar – where a regular, an Irish actor, suggested he go along to an audition. ‘He never looked back.’

Saoirse was born in the Bronx (her name is Gaelic for ‘freedom’ and is pronounced – I’ve been practising – ‘Sir-sher’). While mum Monica worked as a nanny, dad took her on set, so – no lie – she was bounced as a baby by Brad Pitt on ‘The Devil’s Own’. Not that she remembers any of this. The family moved back to Ireland when she was three. By eight she had a part in an Irish soap. ‘I’ve never been scared of the camera,’ she says, not boastfully but as a matter of fact. An only child, she’s close to her parents: ‘We’ve become a tight unit travelling for the last eight, nine years.’ In that time she’s made 15 films.

Mini-Meryl is how I’ve been describing her to people who don’t know her. As in Meryl Streep. She’s that good. Her range is astonishing, from goofy girl next door in ‘The Lovely Bones’ to ice-cold teenage assassin in ‘Hanna’ (she does her own stunts: ‘I can throw a punch if I need to’). And, like Streep, she’s a natural at accents, from Queen’s English to all-American. Off camera, she talks in a gorgeously treacle-thick Irish brogue.

But now comes the sticky bit, that tricky transition from child star to grown-up actress. Earlier this year, Ronan got her first (screen) snog in the Stephenie Meyer adaptation ‘The Host’ and she screams the C-word like a banshee in her new film ‘Byzantium’. She’s creeping towards more mature roles, but not, she insists, ‘in such a blatantly shocking way that people say “Oh she’s doing this so she can grow up.” It really bugs me when I see people doing that.’ Does she worry about being stuck with the child-actor label? ‘Not really. I never did the kiddie-acting thing.’

In 2011, she took the toughest decision of her career so far, turning down an offer from Peter Jackson to play an elf in ‘The Hobbit’. ‘The thing with me is,’ she says, ‘I’m very independent. I do want to do my own thing...’ I have to stop her here. She turned down ‘The Hobbit’? The royalty cheques alone! What was she thinking? Besides, she would have been a brilliant elf. ‘I know! I was heartbroken for months afterwards. But, basically, the schedule was too long.’

Perhaps. She’s worked with Jackson before – seven months on ‘The Lovely Bones’ – and knows the score when it comes to his marathon shoots in New Zealand. But I suspect too that Bilbo and the crew might not have fitted in with Ronan’s masterplan. Her big thing at the moment is being typecast as, well, elf-ish. She rolls her eyes when I bring up the E-word: ethereal.

To that end, instead of ‘The Hobbit’, she signed up for two British films. The first is ‘Byzantium’, an avenging feminist take on vampires written by Moira Buffini and directed by Neil Jordan. Ronan stars with Gemma Arterton as mother-and-daughter bloodsuckers – relieving victims of vital fluids not with fangs but a nifty retractable thumbnail. ‘It’s so dark, gothic and twisted,’ Ronan says with relish. She plays Eleanor, a teenage vampire born in the eighteenth century – ‘a nice killer’, who preys on elderly victims who are ready to die.

Next up, she plays Daisy – a smart, stroppy and self-absorbed 15-year-old – in the film of Meg Rosoff’s teen novel ‘How I Live Now’ (out in October). ‘There’s a sex scene in that,’ she says, serious. ‘It’s a love story, but a real love story, with first-time sex and people being dragged apart from each other, with cursing.’ Well, you don’t get that with Tolkien. Ronan giggles, then adds thoughtfully, ‘I’ve done the right thing, but then I’ve always been strong-minded. I think people know that now.’ And if they don’t, they soon will.

Read our review of 'Byzantium' 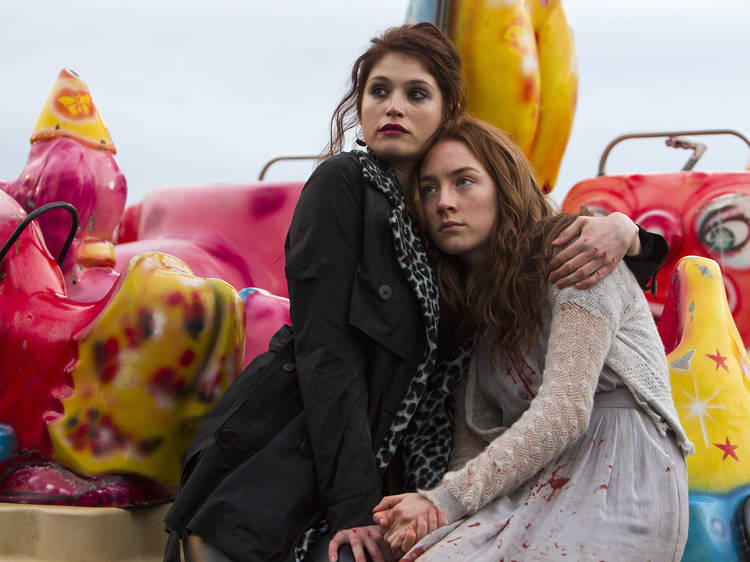 Their story begins in the early 1800s, when Clara is raped and forced into prostitution by a sadistic, heartless army officer. The stage is set for a twisted gothic tale. But the modern story is shapeless and not nearly as chilling: Eleanor meets a boy with leukemia; Clara opens a brothel in a hotel called the Byzantium in a faded English seaside town.