Shane Meadows: 'The Stone Roses are gods. I'm a baldy'

Nottingham Science Park is the last place you’d expect to find a world-renowned film director. As the name suggests, it’s a faceless industrial complex on the outskirts of town, all stained concrete, tinted glass and rusty girders. Shane Meadows’s office here is equally unimpressive – a computer, a sink, a sofa and a couple of guitars. But the ‘This Is England’ director seems happy enough. ‘I’m the only one who isn’t a scientist,’ he says. ‘So it’s quiet, mostly. One day the hazardous chemical team did turn up because a guy had thrown something in the bin which ate an eight-foot hole in the floor.’

We’re here to talk about ‘The Stone Roses: Made of Stone’, the 41-year-old’s film about his lifelong heroes The Stones Roses. Meadows had never made a documentary before, but the band handpicked him to tell the story of their triumphant, if occasionally stormy, 2012 reunion tour. The result is a film that celebrates one of the UK’s great musical institutions – and gives voice to their legions of fans – while remaining staunchly a Shane Meadows film: raggedy, heartfelt and honest.

When did you first hear The Stone Roses?
‘It was 1989. Everyone in trendy cities got the Roses way before we did in Uttoxeter. But there were a couple of lads who worked in Kwik Save who had really refined tastes, and one of them played me the first album in his house, this mad horrible block of flats. I’d be 16, nearly 17, about to start at Burton-on-Trent tech. I had this really wank ginger ’tache and a crap hairdo. But that music gave me a sense of identity. The first time I dated a girl who wasn’t a hairdresser, I put “Waterfall” on and she snogged me. All of a sudden I was going out with this girl in tie-dye, and I was this little tramp from nowhere.’

Did the band inspire you as a filmmaker?
‘Yes. I think the Roses, like any great working-class band, give you that feeling that you can do it yourself, whether it be music or film or whatever. Some of their early interviews are fantastic: bold, arrogant, fucking exquisite. I’d always been angry, growing up among unemployment lines. But seeing a band like that, taking on the establishment and smashing it, saying they were the greatest band in the world, it was wonderful. So when I started making films, filling out forms trying to get funds and getting rejected, I said: “Fuck it, I’ll do it myself, I’ll get my mates together.” Obviously they’re rock gods, and me and Mark [Herbert, Shane’s producer] are podgy baldies, but in terms of work ethics, we’re not too different.’

How do you keep that spirit alive as you get more successful?
‘I didn’t realise what that spirit was until I made “Once Upon a Time in the Midlands”. I was an arrogant shit. I’d made films for ten quid and now I’ve got three million quid, and even if the insurance bond people are pulling pages out of the script I’m still smashing it. I had the execs and the big budget and the lighting crews and the trucks, but I realised there was no soul in what I was doing. I didn’t even know I’d got a soul until it had gone. That created a desire in me to retain that punk attitude.’

In the film you’re clearly a bit star-struck. How did you handle that?
‘I knew I wasn’t cool, so I didn’t try to be. If you’re Ian Brown you could walk around in a fucking leotard and still be fucking cool, whereas I could walk around in the best clothes in the world and it’d look like I’d nicked them.’

Was there ever a moment where you did anything really stupid, really showed yourself up?
‘After the tour, John Squire asked me round to his house for dinner, to show him a rough cut of the film. I got lost. His house is in the middle of nowhere, and it was icy. We’re driving up this steep hill, the lane’s about a foot wide, I’ve got a real panic on. We’re late and I’m trying to text John, but it won’t go through cos it’s so remote. Then the wheels start spinning. And just as we manage to get near the top, a fucking horse appears with a woman on it. So we start sliding back down the hill. The horse starts freaking out, slips, falls on its arse and starts sliding, this half-ton animal coming right at us.

‘We went backwards into a hedge, the horse went the other way, and we survived. I wound the window down to get some air, and at that moment a fucking Canadian goose flew past the window, did a massive shit. It came through the window and hit me in the arm and the face. I went to John’s covered in shit. That was about my lowest point.’

Your decision not to include the band’s bust-ups on tour has been controversial. Why leave them out?
‘So many films have done it, it’s nice to hold something back for once. I just didn’t think it was tasteful. If they were having a discussion, I’d say to my crew, “We’re going to leave them to it.” If someone tried to film me having an argument, I’d probably lose respect for them. My dad taught me to be that way. Don’t sift for shit, it’s not the gentlemanly thing to do.’

How involved were the band in the editing process?
‘They gave me the final cut, it wasn’t an issue. But they watched it as I went along. Ian would pop to his mum’s and get old pictures, and Reni’s wife found us a load of articles. They wanted to support it.’

Is ‘This Is England ’90’ still on?
‘I’m going to get it written this year – it’s all in my head ready to go. But I’m also trying to get my next film written, then I’ll see which one feels ready. I’m completely committed to “This Is England ’90”. I love that cast, it’s become something special. But I’m also trying to raise £5 million or £10m for the movie.’

What’s the film about?
‘The cyclist Tommy Simpson. Whenever I mention it to people they go, “Shane Meadows, Tour de France, 1960s, really?” He was the BBC Sports Personality of the year, he was the first Briton who had the chance to win the Tour, but he killed himself with amphetamines. There’s a Jake LaMotta vibe in there.’

You’re not a fan of London. What is it about the place that puts you off?
‘I love riding my bike, getting out in the countryside. I know you can find those things in London, but if there’s a patch of grass, like Soho Square, you have to get there at half nine in the morning to get a space. I like to be surrounded by freedom rather than try and find a little fake bit of it for five minutes a day. Also, I don’t think it’s a brilliant thing to have one place as the epicentre, the industry can get lazy. There was a sense when I was first going to London, who’s this jumped-up little prick? We’ve been here for 60 years. The film world was like an old dinosaur. And besides, my films are made up here, my family’s here.’

You’re obviously a man who values creative freedom. Do you think that’s one of the reasons you fell for such a bolshy bunch as the Roses?
‘Without question. When I went into some of my early film meetings, I was living on £32 a week on the dole, but I knew I had to believe in the film, to make people think that if they didn’t go with me, it’d get made anyway. I make those films, I win a prize at Venice, then they think they’ve missed something, and the next time I go in they’re nicer. The music industry and the film industry are full of people who say: “We could’ve signed the Beatles, we could’ve signed the Stones.” You have to make yourself look invaluable.’

‘The Stone Roses: Made of Stone’ opens in the UK on Wed Jun 5.

Read our review of 'The Stone Roses: Made of Stone' 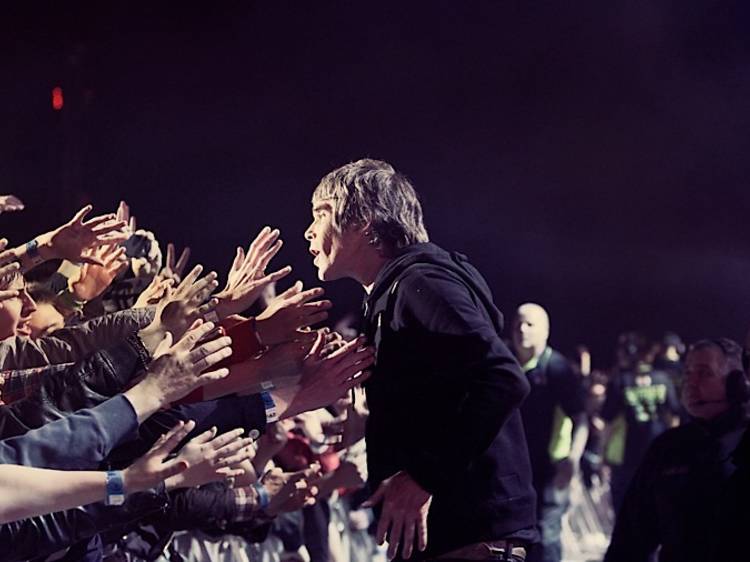 The Stone Roses: Made Of Stone

A lifelong fan, Meadows was invited by singer Ian Brown to document the band’s 2012 reunion tour, and the result feels more like a Shane Meadows film than you’d ever expect. In many ways, it’s a standard rockumentary, with its live footage, backstage clowning, wistful voiceovers and tons of helicopter shots. But it’s also a hymn to creativity and collaboration, and a thrilling, unabashed celebration of the power of music.

Read review
See the full review of 'The Stone Roses: Made of Stone'