Steve Coogan interview: 'I have a lot of love in my life'

It’s noon at Madame Jojo’s. Steve Coogan, looking nightclub-dapper in a sharp grey suit and crisp white shirt, is perched in front of one of the Brewer Street cabaret venue’s scarlet booths. Flanked by latter-day showgirls and drag performers, he is the straight man amid a flurry of sequins, bling, outsized feathers, heels and hair-dos. ‘How do you want to look, Steve?’ Time Out’s photographer asks. ‘Surprised? Excited?’ Coogan demurs. ‘Nonchalant, I think.’

Of course it would take more than this little scenario to shock Coogan. Not only has his career as a sensationally successful British comic been punctuated with sex-and-drug-shocker tabloid splashes, but he has spent much of the last year inhabiting the character of Paul Raymond. Nightlife impresario, property magnate, filth merchant, anti-censorship crusader, Britain’s richest man, patriarch of a broken family – Raymond was all these things, and the unofficially crowned ‘King of Soho’, much of which he owned.

The 1958 opening of the Raymond Revuebar in Walker’s Court marked a turning point not just for its Liverpool-born proprietor, until then a postwar spiv-turned-smalltime variety producer, but for Soho itself. The district had long been associated with sex, nightlife and exotic influences, but Raymond’s saucy new venue kickstarted its reinvention as the coolest place in town.

Raymond is the subject of ‘The Look of Love’, Coogan’s fourth collaboration with director Michael Winterbottom, following 2002’s ‘24 Hour Party People’ (in which Coogan played Madchester mover and shaker Tony Wilson), 2005’s ‘A Cock and Bull Story’ (in which he played Tristram Shandy, and a version of himself) and the 2010 TV series ‘The Trip’, in which he played himself again, this time on a restaurant crawl with Rob Brydon.

Unsurprisingly, the Steve Coogan I meet at Madame Jojo’s is a bit like the one he’s played on screen: highly articulate and evidently thoughtful about himself, his work and its context; affable and sharp-witted but somewhat guarded, even prickly at times. At one point he bristles at the idea that ‘The Look of Love’, which features – among other things – a naughty vicar, a wedding from hell and a ’70s penthouse designed by Ringo Starr, is funny. ‘I think I laughed about three times. Why, did you think it was hilarious?’

Madame Jojo’s is in the heart of Raymond’s Soho: he established the club in 1987, round the corner from another of his properties, the Windmill Theatre, where, in 1990, the 24-year-old Coogan met Raymond while recording a TV comedy showcase. ‘I shook hands with him. Very pleasant. Respectable. Immaculately dressed with a silk handkerchief in his pocket.’

Three decades earlier, though, Raymond had been at the cutting edge. His clubs attracted everyone from The Beatles and Peter Sellers to Sinatra and the Krays, and he regularly hit the front pages for on-stage set-pieces featuring swimming pools and all-gold sets or off-stage publicity stunts involving courthouse press conferences and nude horse-riding.

By the time he died in 2008, Raymond had reshaped Soho, for better and worse, and was a billionaire. Yet he lived in his Piccadilly penthouse more or less as a recluse, alienated from most of his family and grieving for his daughter Debbie (played by Imogen Poots in ‘The Look of Love’), who died of a heroin overdose in 1992.

‘You make money and you spend money; you drive a Rolls-Royce and you eat expensive food and drink expensive wine and that’s it,’ Coogan says in a matter-of-fact tone. ‘And that’s not enough. I think there was a lack of substance to his life that he eventually became aware of.’

Coogan’s own past appreciation of expensive cars, lap dancers and cocaine is well documented. One particularly memorable encounter saw him showering a topless model with £5,000 in cash (ironically, he maintains). So did he not identify with Raymond at all? Coogan sighs. ‘Yes, it’s part of my life but it’s a small part of my life, a part that’s amplified because we live in a tabloid world.’

Couldn’t Raymond have said the same thing? ‘No, because that was his life. That defined his life. Sexuality was what he sold. I don’t sell sexuality, it’s just that sometimes I get caught doing something which is sexual and it’s exploited by the tabloids. The film is about people who are surrounded by all the materialistic things in life and are just desperate for love and something that is meaningful. Despite my indiscretions, I think I have a lot of love in my life.’

We’ll be seeing plenty of Partridge this year: the day after our interview, Coogan is due to see a first cut of the Alan Partridge movie. So, what would Alan make of Paul Raymond? ‘I think he’d be disapproving of him because Alan’s a bit more Daily Mail – though Raymond probably read the Mail. What they have in common is that thing of ostensible respectability and a fascination with the darkness of humanity dressed up as a sort of judgmental prurience.’

This is a subject close to Coogan’s heart – last year saw him join with gusto the campaign against tabloid misconduct that claimed the News of the World as its biggest scalp. And although ‘The Look of Love’ suggests a Midas-like tragic trajectory to Raymond’s life, judgmental prurience is not its style.

‘It’s a morality tale but we didn’t want to turn it into some simplistic “if-you-mess-around-with-porn-you’ll-ruin-your-life” thing,’ Coogan insists. ‘Part of the film has to show that that lifestyle was fun and could be liberating. It was a double-edged sword.’ So while the story offers plenty of lows – including the queasy sight of a man chopping out a line for his daughter while she’s in labour – the highs are a blast. Central to this is Soho itself, from wheeling shots down Greek Street to a stand-out night sequence in which Paul and Debbie euphorically cruise the streets in the Roller: royalty surveying their kingdom.

These days, Soho ain’t what it used to be: less sleaze and booze, more media and coffee chains. ‘It’s less dirty, literally and metaphorically,’ says Coogan, whose professional life has been based here for more than two decades, at comedy clubs and in the offices of his agent and production company. ‘Areas become more pleasant but they lose something. There’s still an allure about Soho, and something quite British about it, a parochial quality. And it still has an air of lacking respectability, which is appealing, even if it’s mythology.’

With that, it’s back to posing. One of the burlesque performers leans in. ‘If a showgirl’s coming on to you,’ she coos into Coogan’s ear, ‘you must be doing something right…’ He raises an eyebrow, then grins.

Read our review of 'The Look of Love' 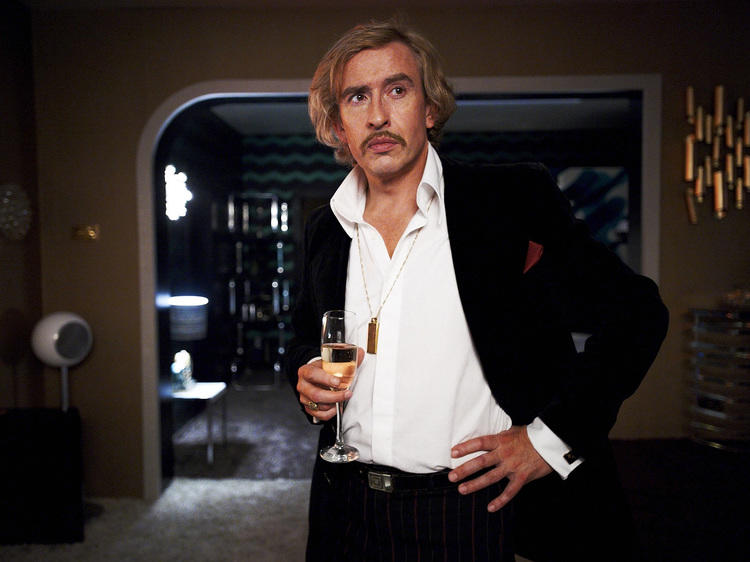 The Look of Love

There’s something a bit over-familiar here – in a solidly entertaining, made-for-telly, nothing-we-haven’t-seen-before, way. And given that the last time Coogan and Michael Winterbottom worked together it was on the genius-funny road-trip comedy series ‘The Trip’, you can’t help wishing for something a little sharper.

Read review
Read the full 'The Look of Love' review