The day is fast approaching when we gather our loved ones together to celebrate a simple man who brought a message of joy to millions: our Lord, George Lucas. Yes, ‘Star Wars: The Force Awakens’ is about to hit cinemas, and we Wookiee-worshippers will be thronging the pews down at the local multiplex, ringing in a whole new era of ‘Star Wars’ fandom.

But what about those poor souls who have never seen ‘Star Wars’? Who have never felt the simple joy of robot banter or the warmth of an Ewok’s campfire? When I learn that one of my good friends – former Time Out TV expert Phil Harrison – is suffering from just such deprivation, I have to step in.

Despite growing up in the early ’80s heyday of ‘Star Wars’ mania, Phil has somehow managed to miss all six movies. He puts on a brave face, but I can tell that deep down he is crying out for some Yoda-like guidance. In a spirit of festive generosity, I decide to take him under my X-wing and tutor him once and for all in the ways of the Force. It’s time for a marathon.

Following a heated outcry on Twitter (‘for the love of God, think of the newbie!’ screamed one @timeoutfilm follower) I opt to present the trilogy in release order, starting with the cheerful low-budget thrills of the original and working up to the CG-slathered sprawl of the prequels. Fuelled with pizza (the Hutt), blue milk and strong beer, and surrounded by a rogues’ gallery of action figures and memorabilia, we blast off for a galaxy far, far away…

9.02am
For me, the opening of ‘Star Wars’ is like coming home: everything’s just where you left it, and all your friends are there to greet you (I know, I know, it’s pathetic). But might it look a bit rough-around-the-edges to someone who’s never visited before? ‘It reminds me of old “Doctor Who”,’ says Phil, and I have to resist the urge to hit him over the head with my plastic lightsaber.

9.13am
R2-D2 is kidnapped by the junk-dealing Jawas. ‘Is that a wookiee?’ asks Phil. No, it’s not a wookiee. ‘Is it an orc?’ Not for the last time, I channel my inner Jedi master and exercise patience.

10.01am
Phil is making our trip even more nostalgic by repeating almost word-for-word the observations my dad would make when we watched ‘Star Wars’ on telly at Christmas. So Darth Vader ‘has a respiratory problem’, C-3PO ‘is a bit camp’ and R2 ‘looks like a bin’. I’m surprised when the film isn’t interrupted by adverts for Watney’s Red Barrel and the Woolworth’s sale. 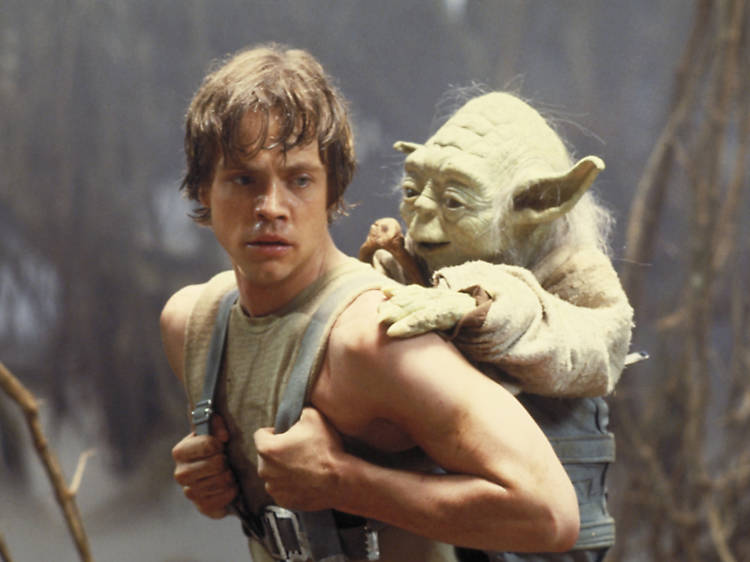 10.58am
The crowning glory of the saga, ‘Empire’ is one of my very favourite movies, a go-to retreat in times of illness and/or extreme hangover. For Phil, it’s thrilling for an entirely different reason. ‘Fucking hell, you didn’t tell me Cliff from “Cheers” was in it! Brilliant!’

11.51am
‘That’s Yoda, right?’ Yes. ‘Get in!’ We’ve landed on Dagobah to meet the mystic muppet, and by this point we’re both thoroughly entranced. There’s just time for a late brekkie: snake soup for the Jedi, toast and jam for us.

12.40pm
I’ve learned that Phil doesn’t know who Luke’s dad will turn out to be. Sadly, I’ve made such a fuss about it that he’s figured it out on his own by the time Darth steps up for the big reveal. But we glide through to the finale in good spirits. ‘I’m really enjoying myself, actually,’ says Phil. ‘It’s cheesy but fun. I wonder why I didn’t want to see them when I was nine? I think I was just an unusual child.’

1.36pm
I’ve always known the opening act of ‘Return of the Jedi’ gave me a creepy feeling, but I’d never really analysed it before. ‘It’s a bit bloody pervy, this,’ observes Phil, as we watch a giant fleshy snake being throttled to death by a woman in a bikini, while outside people are thrown into a gaping anus filled with writhing penises.

1.49pm
Phil is worried about Princess Leia, and with good reason. Freed from her bondage chains, she seems content to take a back seat to the guys’ heroics. ‘She’s been marginalised in an annoyingly patriarchal way,’ snaps Phil Harrison, space feminist. I explain that Leia’s downgrade was partly down to Hollywood chauvinism and partly down to Carrie Fisher’s galloping drug problem.

2.33pm
‘Oh cool, Lionel Richie’s got the good plane,’ grins Phil as Lando Calrissian pilots the Falcon into the final battle. I feel like he still hasn’t quite got the hang of things, but at least he’s enjoying himself. Dark clouds are gathering, however, and I think before long weesa gonna be in bombad trouble… 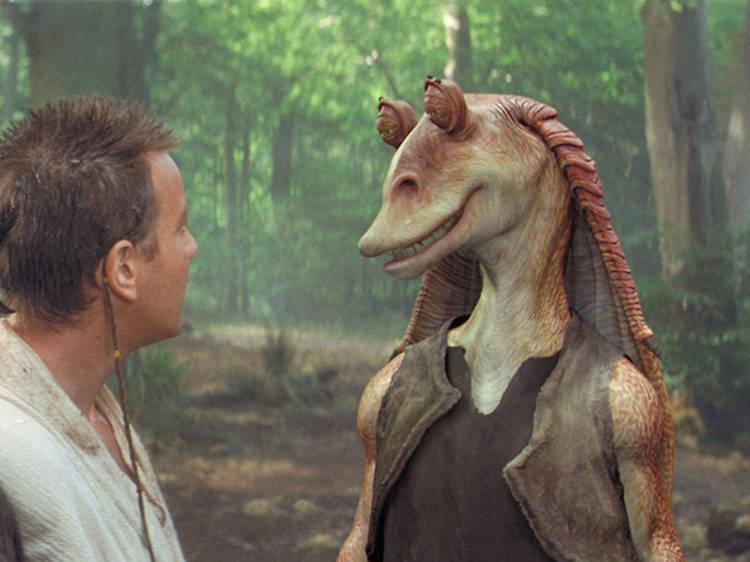 3.09pm
The fretting begins before the film’s even started. Looking at the DVD menu, Phil growls. ‘Oh, there’s a small child in this one, is there? That’s worrying.’ The film starts, and we both burst out laughing at Ewan MacGregor’s hair. It looks like he got it cut at the Womad festival. By Linda McCartney.

3.24pm
The first appearance of Jar-Jar Binks comes as something of a shock. Even I’ve forgotten just how grating, out-of-place and faintly racist the gangly Gungan is. ‘Exqueeeeze me!’ giggles Jar-Jar. ‘Oh Christ, fuck off!’ roars Phil.

5.04pm
Over the past two hours, the atmosphere in the room has turned decidedly sour. This is a tedious, sand-in-the-pants-irritating film filled with bad ideas – Midi-chlorians, virgin births, battle droids – and slappable characters, notably the excruciating Anakin. Still, the moral of the story rings true: annoying little brats grow up to be genocidal maniacs.

5.25pm
We’ve been here for more than eight hours and Phil is starting to lose it. ‘Ewan MacGregor looks like David Brent now. Or David Bowie. Or both.’ I ask if he’s okay to keep going, and he nods weakly. ‘It’s all starting to blur into one,’ he admits. ‘I have no idea what’s going on, and I don’t really care.’

5.49pm
This one was shot in Australia, so all the bit parts that used to be played by teachers from ‘Grange Hill’ are now filled by actors from Aussie soaps. There’s a great bit where Damian from ‘Home and Away’ tries to sell McGregor some ‘death sticks’. Clearly, he’s seen ‘Trainspotting’. I catch myself wondering whether they have heroin in space, and start to fear for my own sanity.

7.22pm
It’s the big lightsaber battle, and we both sit up and pay attention when Yoda draws his weapon. ‘That’s actually pretty great,’ admits Phil, as the little green fella goes batshit on Christopher Lee. We may yet be able to pull things back from the brink. 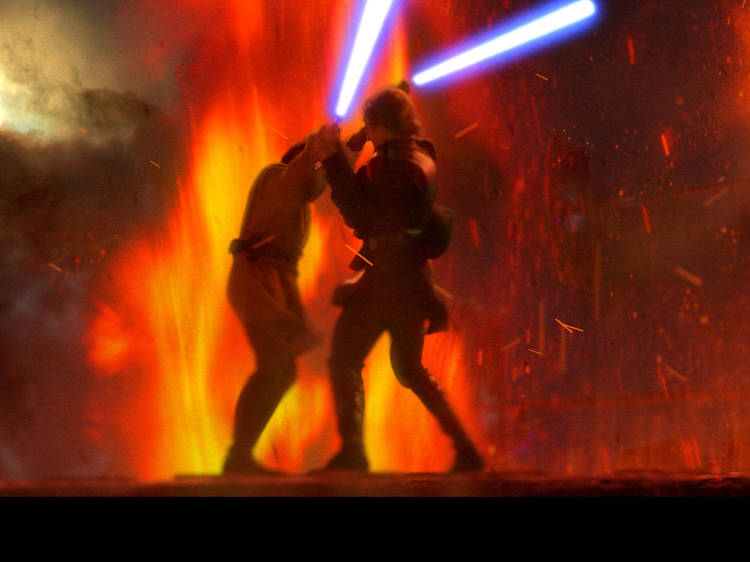 7.40pm
The end may be in sight, but morale is low as we plunge headlong into the final movie. ‘I feel slightly deranged,’ Phil tells me. ‘I keep telling myself my great-grandad worked down a pit, so I really shouldn’t complain.’

9.29pm
‘Is that, like, a river of fire?’ Yep. ‘Cool.’ I’d actually forgotten how good this movie is – it really doesn’t deserve the stick the other prequels get. We both rally for the rousing finale, in which Anakin and Obi-Wan go head-to-head in an absolutely cracking lightsaber duel.

9.47pm
As the credits roll for the final time, I ask Phil how he feels about the whole experience. ‘I enjoyed it,’ he admits, almost sheepishly. ‘I think that once I’d acclimatised to the general horror of my situation, Stockholm Syndrome kicked in. There are so many clichés, but I realise now that they invented all the clichés.’ I smile benevolently, knowing I’ve managed to bring a little light – a little joy – into someone’s life. ‘That said,’ he adds as an afterthought, ‘“The Phantom Menace” is the worst movie I’ve ever fucking seen.’ 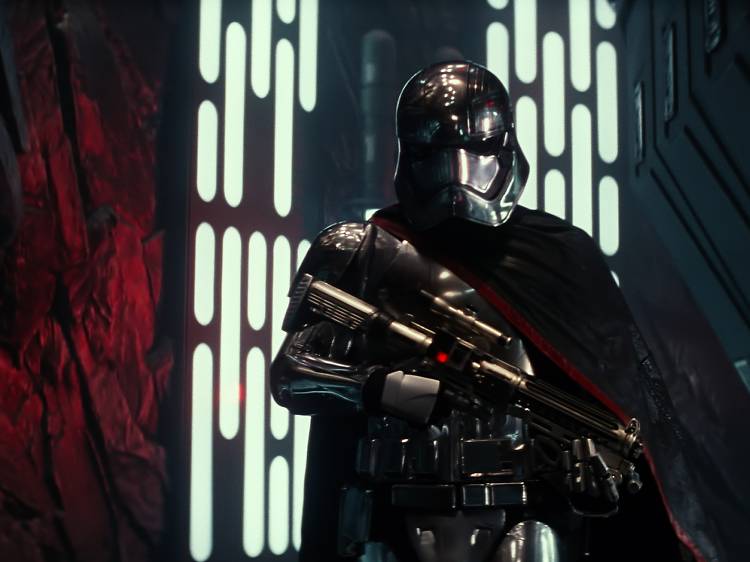 If you care about ‘Star Wars’ you’ll already have the skinny on ‘The Force Awakens’: you’ll know that ‘Star Trek’ rebooter JJ Abrams is directing, that the diverse, well-chosen cast includes Peckham’s own John Boyega, newcomer Daisy Ridley, ‘Inside Llewyn Davis’ star Oscar Isaac and of course the original three icons, Mark Hamill, Carrie Fisher and Harrison Ford (plus sidekicks Chewbacca, C-3PO and R2-D2). You‘ll know that the plot is being kept strictly under wraps, but that it revolves around a new resistance to galactic troublemakers The First Order. You’ll know that you’re insanely excited, and praying that Abrams gets it right.