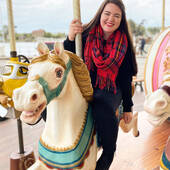 From creaky old buildings covered in vines to boarded-up churches and cemeteries, there are more than a few Florida ghost towns to explore. Sure, plenty of these abandoned towns aren’t actually occupied by spirits, but at the very least, they’re certainly home to creepy-crawlies.

Considering how popular the state’s beach scene is today, Florida might not be the first place that comes to mind for ghost towns. But in the 1800s and early 1900s, towns all across the state were often centered on major farms and sawmills — many of them cropped up as railways and orange groves allowed people to travel and have steady work, but weather catastrophes (hurricanes and freezes) brought these bustling towns to a screeching halt and residents cleared out. Now all that remains in many of these ghost towns and abandoned estates are the shells of homes, overgrown graveyards, and the haunted tales from folks who visited and experienced the heebie-jeebies. 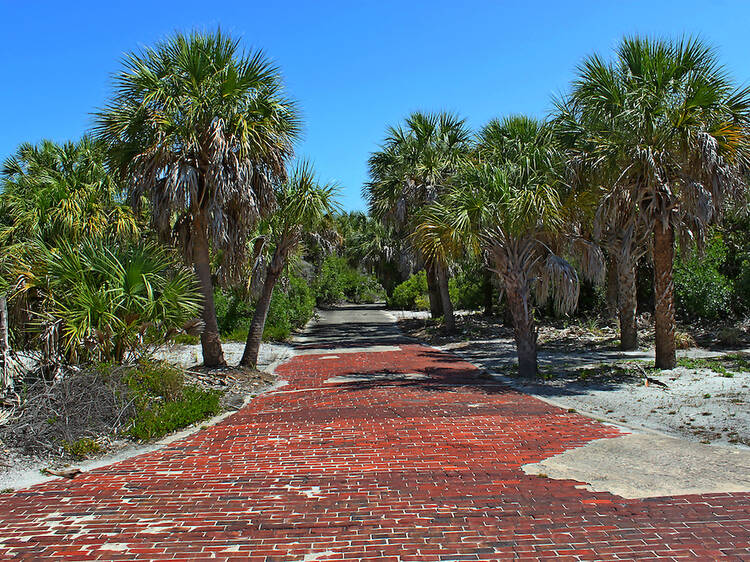 At the mouth of Tampa Bay, the tiny island of Egmont Key has a unique history to explore (heads up: it’s only accessible by boat, so you’ll need to work for it). Although the island was active in the mid-19th century as a camp for captured Seminoles during the Third Seminole War, the island’s current structures came later, when Fort Dade was established in 1898. The fort itself was built in preparation for the ​​Spanish-American War, and by the time it was completed in 1906 the fort had standard-issue perks like a movie theater, a hospital, brick roads, and tennis courts for its 300 or so residents. The fort was eventually deactivated in 1923, but you’ll still see remnants of Fort Dade (along with a lighthouse operated by the Coast Guard) today, including a worn-out brick road for walks down memory lane.

Hopewell (originally named Callsville in 1870) was an area known for the Turner Plantation, where slaves worked the land. After the slaves were freed, the plantation was divided into small homesteads. Today, the former town is surrounded by citrus groves and the only buildings that remain are the McDonald House, Hopewell’s church and cemetery, and the Hull House. While many of the town’s homes were overtaken by trees and vines and are too dangerous to explore, some of the homes are still in decent shape for prying eyes.

White City was founded in the early 1890s by a group of Danish settlers from the midwest. In 1894, a man named Colonel Myers came to town with great plans for the community — alas, he was only a great con man. The colonel swindled people out of their money and land by setting up a land scheme, taking down payments for land parcels and taking charge of resident’s savings for his future bank; after a short time, he disappeared with much of the town’s cash, and when the freeze of 1984 to 1985 came through, crops were destroyed and people left town. Visitors can go into the White City Marketplace, now an antique shop, and see some of the town’s homes from the early 1900s.

Kismet, founded in 1884 by the Kismet Land and Improvement Company, was once a thriving citrus community until the freeze of 1889 destroyed its orange groves. The town was popular enough amongst snowbirds that it even had a 50-room hotel (which was eventually torn down and rebuilt in Eustis, Florida, where it lasted until 1955). Kismet is also where Walt Disney’s parents, Elias Disney and Flora Call, were married in 1888 — just up the road, in the town of Paisley, you can also visit Walt Disney’s grandparent’s gravesite.

Ellaville, a boomtown in the 1800s, was once home to about 1000 people at its peak. The town was known for logging, sawmills, and professions like railroad car building, which lured plenty of people looking for steady work. In 1895, after two black men were lynched in the town, Ellaville was no longer considered safe. People traveling through today can see the ruins of the first governor’s mansion, a sawmill, and even a post office that operated until 1942.

Capps, located east of Tallahassee at the intersection of US-19 and US-27, was once the headquarters of the Tungston Plantation and one of the largest manufacturers of tung oil (an oil used in varnish and paint). Travelers can visit the Rosewood Plantation and also the Asa May House, once owned by a wealthy cotton planter; the house, built around 1836, is on the National Register of Historic Places.

Just west of the Florida Turnpike is a ghost town named Fort Drum. During the Second Seminole War this area housed a fort, and the town was settled after the Civil War by people looking for jobs in the cattle business. Today, all that remains of the town is a cemetery (where many of the early residents are buried) and the original Fort Drum school (now an antiques and collectibles shop). You can visit both the cemetery and the store as you’re driving through Central Florida.

Rollestown was established in 1767 by Englishman Deny Rolles. Hoping to start a farm in the area, Rolles brought indentured servants with him from London — none of them knew anything about farming, however, so the plantation failed. After the failure, Rolles then brought in slaves to work the crops and raise cattle. The plantation was eventually abandoned in 1783 after the British gave Florida back to Spain; Rolles returned to England, and the slaves who worked the land migrated to the Bahamas. Now all that’s left is a historical marker of the ghost town.

Jacksonville has its own ghost town right next to Naval Air Station Jacksonville. Yukon, located in what’s now Tillie K. Fowler Regional Park, was a community established in the 1800s that was closed in 1963 after the Navy declared it a flight and safety hazard. Some of the old buildings remain, and while some are still in use (like the Yukon Baptist Church), others have since been abandoned. Yukon just goes to show that even in the middle of a bustling city, there could be a ghost town just around the corner.

The town of Tasmania was founded in 1916 when the former community of Fisheating Creek changed its name to, you guessed it, Tasmania. There were two schools and a trading post in town where settlers often traded turpentine, cattle, and moonshine. Due to the Great Depression, families moved away and the schools and post office closed. You can still drive by and see the Lucky Island Schoolhouse, now a barn in the middle of a cow pasture, but as it’s on private property you cannot go inside.

Olso, established and populated by immigrants from Scandinavian countries, was known for its abundance of pineapple plants — about 100,000 of them, in fact. In 1914, Waldo Sexton, a citizen of the town, established his own citrus company and packinghouse. The town also had a post office, school, and railroad stop. After World War I the pineapple industry collapsed and the Great Depression took out local businesses. Today the only business still in operation is the Olso Citrus Growers Association, the oldest packing house on Florida’s east coast.