Sure, spending time at the best Las Vegas casinos and the best bars and lounges in Las Vegas is a great way to experience Sin City. But, for those seeking a slightly different thrill, the best Las Vegas music stores offer a glimpse into the city’s diverse cultural scene. Browse through the best classic vinyl and modern records—from rock to jazz and pop collections—and revamp your musical supply at home while exploring the city in exciting new ways. Once you’re done browsing through your favorite artists’ offerings, grab that extra cash to revamp your closet as well—after consulting our Las Vegas shopping guide, of course. 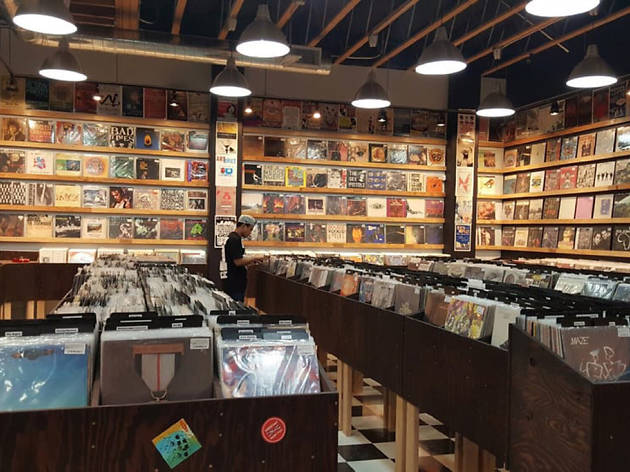 With an impressive bunch of collectibles on display (lots of first edition, post-punk 1990s alt-rock) and an array of impeccably maintained bins, 11th Street Records is just what the Vegas music scene needed. Expect alphabetically arranged vinyl, discount bins and a small, isolated CD collection. Although the vinyl skews a bit more expensive compared to local competitors, a new customer loyalty program does offer discounts to repeat buyers. What sets the space apart is the cool recording studio in the rear, which doubles as a performance area for shows for all ages and is used by both local and international bands. Bonus points: Open late most nights, the venue is the ideal destination for those looking to wander around the city after catching a band at adjacent Bunkhouse. 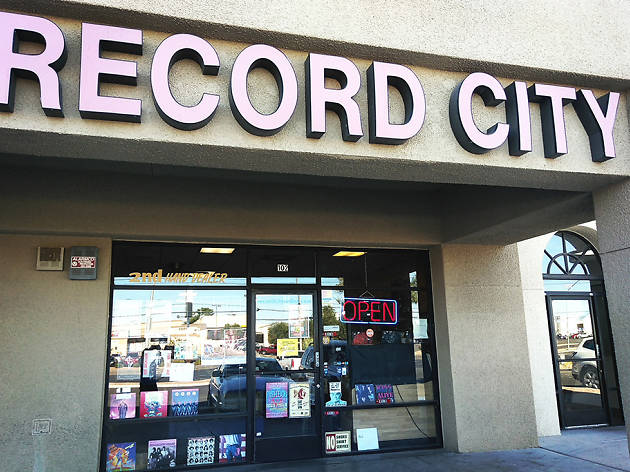 Punks and hip-hop heads flipping through 7- and 12-inches, a father and son combing through the discount bins in the back and a fellow talking the ear off the clerk behind the register: just a typical scene at Las Vegas’ oldest record store, Record City. For 27 years, this far-east valley outpost of the small Record City chain—one still exists in the Hillcrest neighborhood of San Diego and Vegas is home to another location as well—has been a worthy trek for local and tourist record buyers alike (which have included Vegas rock star Brandon Flowers and politically driven street artist Shepard Fairey). With what might be the lowest-priced selection of second-hand records (especially classic rock), CDs and DVDs in town, along with a slowly growing new-vinyl stock—this is a must-visit. Joey McDonald, the store’s manager for 16 years, is as friendly and unpretentious as they come (and has even inspired one local artist to paint his likeness for the store). You might come for reasonably priced Pink Floyd, but you’ll return for Joey and his love for pleasing music fans of all stripes. 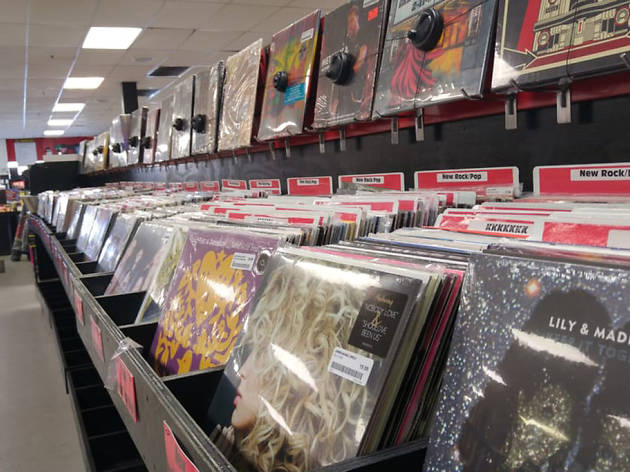 All the familiar record store chains have fallen, but Phoenix-based Zia Record Exchange remains Las Vegas’ closest approximation to a music shop franchise. Actually, it’s more like a pop culture geek’s Target, selling not only music and movies, but also books, video games, turntables, toys, board games and loads of branded knick-knacks—a family-friendly retail outlet, if not for the occasional profane punk blasting from its speakers. At its core, Zia—both its decade-plus Eastern Avenue shop and younger brother Sahara Avenue location—remains the largest album emporium in town, still devoting considerable real estate to used/new CD sales (where you’ll usually find the dads), but now complemented by its expanded vinyl department (where the kids now reign, naturally), including its impressive new/reissue selection. Finds (and clean copies) are hard to come by in the low-turnover used section, but its recent-arrival bays are a must-flip during every visit and the gems displayed on the wall would endear the most cynical collector. 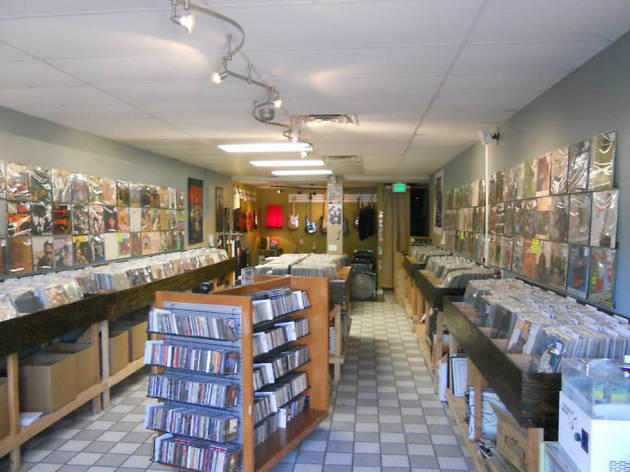 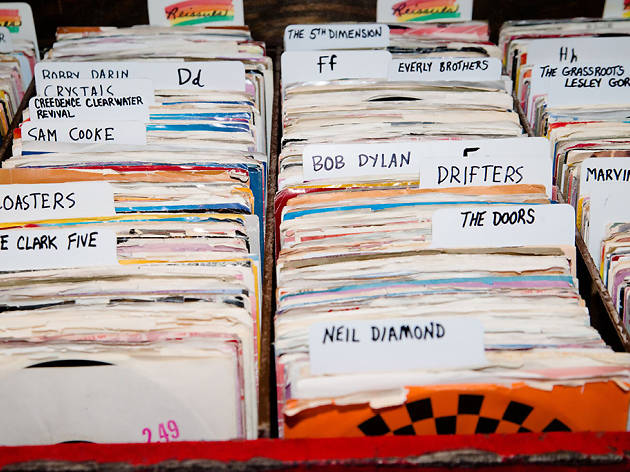 Rich Rosen is a legend in the Vegas vinyl community. He hauled his enormous record collection west from Pennsylvania in 1999 and it has only grown (to an estimated 500,000) in the ensuing years, unencumbered by the digital revolution and thriving during the vinyl revival. Rosen is also well-known for how he runs his store, inquiring customers about their shopping needs as soon as they enter, directing them to the appropriate sections in the labyrinthian, house-like outlet and referring to market prices for the tag-less albums once it’s time to settle up. As such, prices average around $50, but there’s a cheaper section for the titles of which Rosen has multiple quantities, and trust us—if it’s on your used-vinyl wish list, you’ll find it here (along with CDs, books and vintage stereo equipment). It’s why the city’s most obsessive vinyl hounds have this collector’s paradise on speed dial. Even world-renowned artist Elton John is a loyal customer. 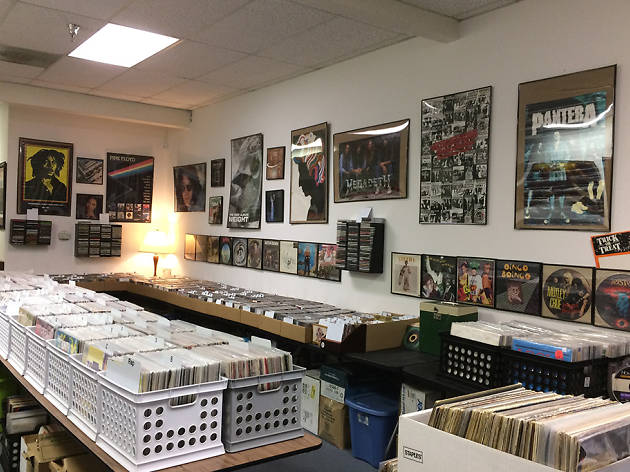 David Levin of Vegas Vinyl will likely offer you a bottle of water at his small, minimalist record shop tucked away in a nondescript strip mall south of McCarran International Airport, and his friendliness and eagerness to satisfy suggests he’d give away more if he could. He nearly does: Discount vinyl—we’re talking 49-and 99-cent specials you’d probably find at garage sales if you had time for that—abounds at the barely year-and-a-half-old store, especially the selection just outside the front door (just don’t expect those titles to be in pristine condition). Inside, framed posters of David Bowie and Lou Reed lord over neatly arranged crates of the usual: classic rock, R&B/soul, country, jazz, hip-hop, dance, metal and reggae. Unlike most vinyl stores, the records displayed on the walls aren’t the most expensive, though some collectors’ titles can be found between the CDs and the register—where David typically sits, checking in with shoppers while he flips over that Fleetwood Mac playing on the turntable.