Pixar’s sequel to 2004’s ‘The Incredibles’ arrives at a time when superhero movies are a dime a dozen. But despite the superpowered family at its heart and plenty of action, it’s not another film full of fight scenes and force fields. Really, it’s a film about family.

Living in a bubble? The Incredi-sequel sees the clan teaming up again

1. The story is a personal one
‘It looks very much like a popcorn movie on the outside, but these characters are personal to me,’ says Bird. Unlike his other projects (such as ‘The Iron Giant’ and ‘Mission: Impossible – Ghost Protocol’) the ‘Incredibles’ movies have seen the writer-director run the show from the beginning. ‘[The original idea] was my notion,’ he says, ‘and being able to see it come into being was thrilling.’

2. It’s about family
Bird recalls being ‘very unenthusiastic two years ago’ about making an ‘Incredibles’ sequel when multiplexes were crowded with latex-clad heroes. ‘But the impetus for the “Incredibles” was never to do a superhero film, but a movie about family.’ Thus the clan’s powers reflect stereotypical roles: strong dad, multi-tasking mum, shy teen, energetic boy and chaotic baby. ‘Family is a far vaster topic than superheroes,’ stresses Bird.

Elastigirl power: Mrs Incredible takes the lead in the sequel

3. Women rule
Wonder Woman and Black Widow aside, female superheroes are still pretty thin on the ground. But Holly Hunter’s Elastigirl is the star of the show this time, with Mr Incredible (Craig T Nelson) left holding the superbaby. ‘Being a superhero again makes the dormant part of her come alive,’ explains Bird. Back home, look out for the ‘unexploded bomb’ that is baby Jack-Jack. ‘When babies become mobile you’re one moment away from disaster,’ says Bird. Expect the newly teleporting, laser-firing toddler to cause havoc.

4. We get to laugh at superheroes
‘Most of our top-tier superheroes were killed off in the first movie,’ says Bird. Those left are ‘kind of B-level’ with seriously niche powers. Chief among them is Voyd (Sophia Bush), who can fire portals from her hands. There’s also Screech, basically a human owl, and Reflux, who burps larva. Fortunately for him, there’s no Captain Alka-Seltzer in the movie.

5. There’s a message
Another incentive to turn your phone off before the film comes in the slippery shape of villain Screenslaver. He uses screens to hypnotise the unwary. Is this a sly comment on society’s phone addiction? ‘Could be!’ laughs Bird. ‘When I was little, we were accused of watching too much television [so] it’s not earth-shakingly new, but it’s a good power for a villain.’ Best not check Facebook until you’re well clear of the cinema. 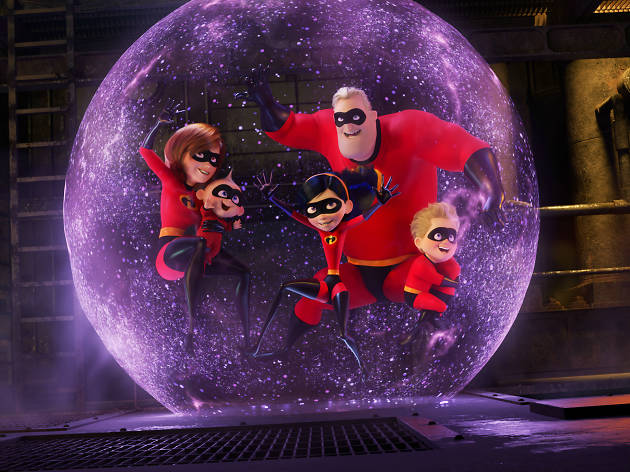 Superheroes may save the world, but parenthood requires skills far more advanced than extendable limbs