As Massive British Comedy writers go, Jesse Armstrong is probably second only to Phoebe Waller-Bridge right now. ‘Succession’, his brilliant HBO show about a chaotic media dynasty, won him an Emmy last month. He has ‘Peep Show’, ‘The Thick of It’, ‘Fresh Meat’ and ‘Veep’ on his gem-laden CV. Now he’s reteamed up with his ‘Four Lions’ co-writer Chris Morris for ‘The Day Shall Come’, an FBI-skewering satire that centres on a group of bungling black rights activists in Florida, which Morris also directs.

When did ‘The Day Shall Come’ start for you?
‘Maybe eight years ago? Chris had clocked these cases that weren’t technically entrapment by the FBI’s definition, but in common parlance would be. The case of the Liberty City Seven [a 2006 case very similar to the one in the film, in which a religious cult in Miami was nudged by the FBI to plan terrorist attacks it had no means of carrying out] was the germ that started it for him.’

As two middle-class white men, did you and Chris Morris worry if you were the right people to write about working-class black men in America?
‘It’s a valid question [and] you have to be aware of that. I remember going into “Four Lions” and thinking: This feels scary. It’s about terrorists and it’s white people writing about brown people. But the research guides you. Most of [the cases involved] people of colour. You do it carefully and be as honest as you can.’

‘I don’t think you can think: God, Trump’s really crazy so we have to make the film crazier’

How does your writing relationship work?
‘Any time I’ve written with other writers we always write alone and swap notes. We’re never pacing around in the same room. I like spending time with Chris, which is good because there’s a lot of talking.’ The world has got madder since ‘Four Lions’. Absurd in 2010 is not the same as absurd in 2019. Did the script change much to reflect that? ‘The real world keeps you honest. I think Chris’s position was that this is an interesting story to tell. I don’t think you can think: God, Trump’s really crazy so we have to make the film crazier. In the same way, if it had been Hillary Clinton in charge, with more sober policies, we wouldn’t have made it more “normal”.’

Your other current project, ‘Succession’, couldn’t be a more different world. What is it that fascinates you there?
‘Very rich and powerful people are not the people you often see portrayed – [they’re not] these cold-eyed killers who are forever slamming scotches down and speaking in perfectly formed sentences. They’re a mess. They can do brutal and horrible things but, also, they fuck up. They’re smart in some ways but super-stupid in others. The point of it is to explore what these people are really like.’

Marchánt Davis as Moses Al Shabaz in ‘The Day Shall Come’

Do you have the show’s whole arc planned out?
‘I do. I have an ending to suggest to the writing room. But they say no plan survives contact with the enemy, so I’m fully prepared for it to change.’

You’re really good at is writing insults. Is there a formula to it?
‘Not really, but everything has to come from [the] character. You can’t just pile swearing on to swearing. You’ve got to think about what is odious about the person being insulted. That’s the fun.’

‘The Day Shall Come’ is out Fri Oct 11. Read our review here. 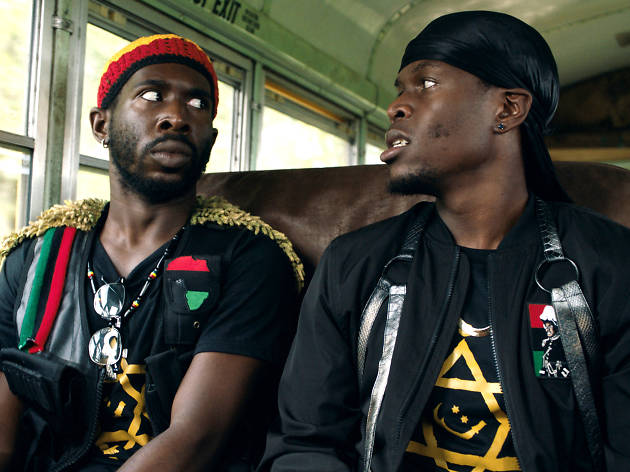